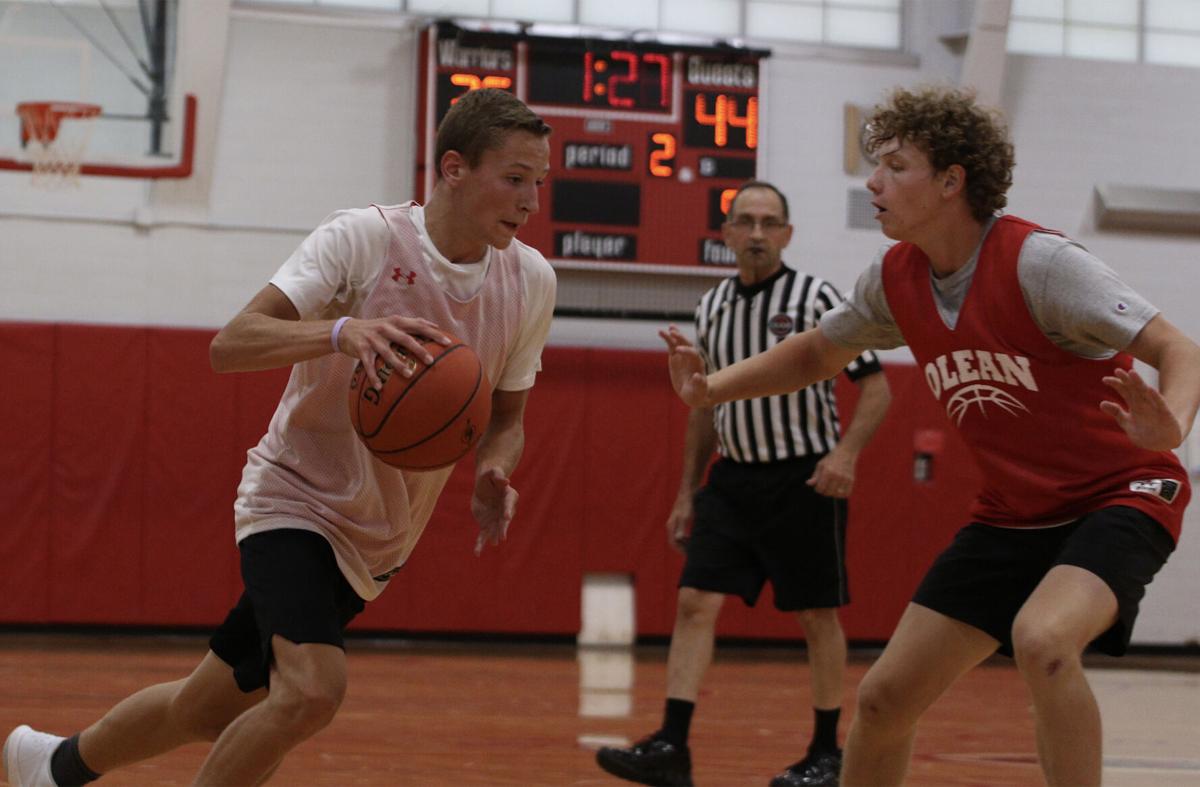 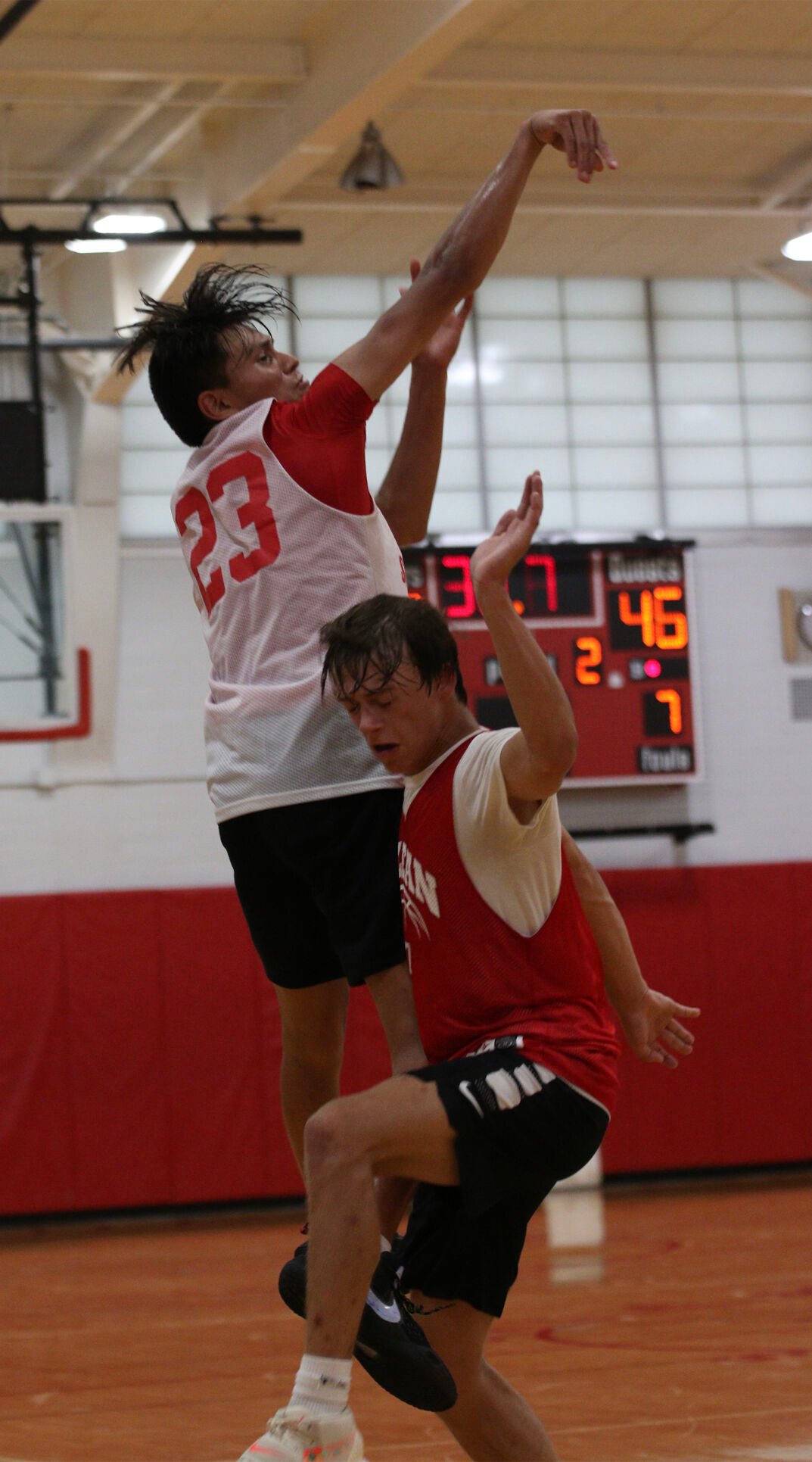 SALAMANCA — With a barrage of defensive pressure leading to transition layups and some timely shooting, the Olean boys basketball team finished its summer league season on a high note.

The Huskies erased a seven-point halftime deficit to rally past top-seeded host school Salamanca Tuesday night in the championship of the Salamanca Summer Basketball League, 48-42.

While Salamanca scored 21 points in each half, Olean scored 14 in the first and 34 in the second.

“Honestly, Salamanca plays some really tough defense and coupled with that we just weren't making shots in the first half,” OHS coach Tim Kolasinski said. “In the second half, we got a lot more aggressive and that aggressiveness on the defensive end led to some easier shots on the offensive end for us.”

“We have a lot of seniors and that's a good thing because they're very high basketball IQ seniors,” Kolasinski said. “Kam's had a really nice summer; a lot of times because a guy's missing here and there, he's played out of position at the point guard. But I think it's helped him in terms of raising his basketball IQ even higher so he understands situational basketball and I think when you see him get those kinds of shots he was getting and taking the kinds of shots that he was taking, that's because of the experience leading up to that.”

BLAKE Frank led Salamanca with 17 points. A Franklinville student and member of the Panthers’ team, Frank played with the Warriors this summer as his school team didn’t play in summer league.

Salamanca’s Lucus Brown chipped in with 17 points and Andy Herrick had nine points on three 3-pointers.

“First of all, I give (Olean) a lot of credit,” Salamanca coach Adam Bennett said. “I thought they played really hard with a ton of pressure and that pressure led us to a few turnovers and they were able to get some easy ones in transition midway through the second half. I think that was the difference in the game. We faced some adversity tonight, one of our starters went down a couple days ago with a knee injury, our point guard tonight played about five minutes because he was dealing with some cramping.

“Those aren't excuses, I'm really proud of how hard our guys played from start to finish. But Olean was able to capitalize in transition, they hit some big shots in the second half and they earned that win for sure.”

Salamanca claimed the top seed in the summer league playoffs after going 7-0 in the regular season. That included a 49-36 win over Olean on July 28. Kolasinski said that game started similarly to this one, but Olean was better prepared to respond to Salamanca’s strong start.

“I thought we really took a back seat in that game in the first half. In the second half we kind of established ourselves a little bit more and made it a game,” he said. “But they were in control from the first half on. Today, I felt like even though (on) the scoreboard we were trailing, that we were playing well, we just weren't scoring the basketball.”

KOLASINSKI said Olean had nearly every player from its summer roster available on Tuesday, except one player on vacation. While the Huskies may add to the roster in tryouts this winter, this summer league team is the “core” to start the season.

“I've always been fortunate to coach really good kids. That continues this year,” Kolasinksi said. “I have a lot of seniors. They're very dedicated and they're very skilled. But ... we're not necessarily the biggest team. So what I was able to see that was encouraging is from the start of summer league until today, I think our physical aggressiveness increased and increased. I think that's going to really help us because skill can get washed out sometimes when you're playing against bigger teams or more aggressive teams. But today I think we were pretty aggressive.”

For the Warriors and Bennett, this has been a fruitful summer and not just in their impressive win-loss columns.

“I think we're something like 14-1 in the offseason and as a coach this time of year I'm not looking as much at the wins and losses as I am about the development of our team,” Bennett said. “We've had some guys step up in big ways and earn some defined roles heading into the season which is really going to help us immensely as we get ready for practice in November, and not only our starters, we've had some young guys step up off the bench.

“We played really good competition, we went to Behrend and played six good teams over there. This league has had great competition in it. And we played well, so … we've done a lot of things that we're excited about and we know will translate to the season, and at the same time we have a lot of work to do. We certainly aren't a complete team now at the beginning of August. Our goal is to hopefully be a complete team at the beginning of March 2021. We're just trying to work to get better at that every day.”

Before then, Salamanca has one more team camp to visit on Sunday at Niagara County Community College.

“We'll play three games there against good competition and then that's it,” Bennett said. “After that we'll shut team activities down, the players that don't participate in fall sports we'll continue with individual workouts, but we're a small school and we encourage our guys to play multiple sports and I'm excited about those guys turning their attention to the fall sports and helping those sports win games.”