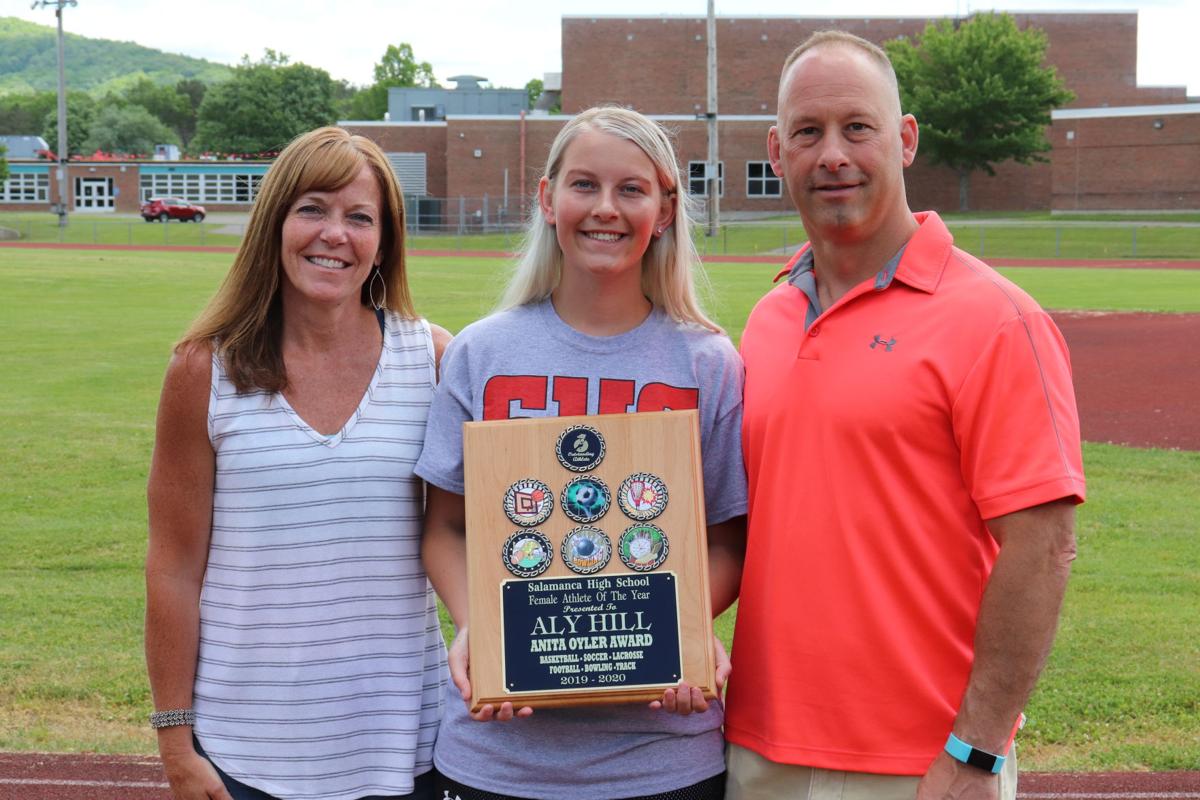 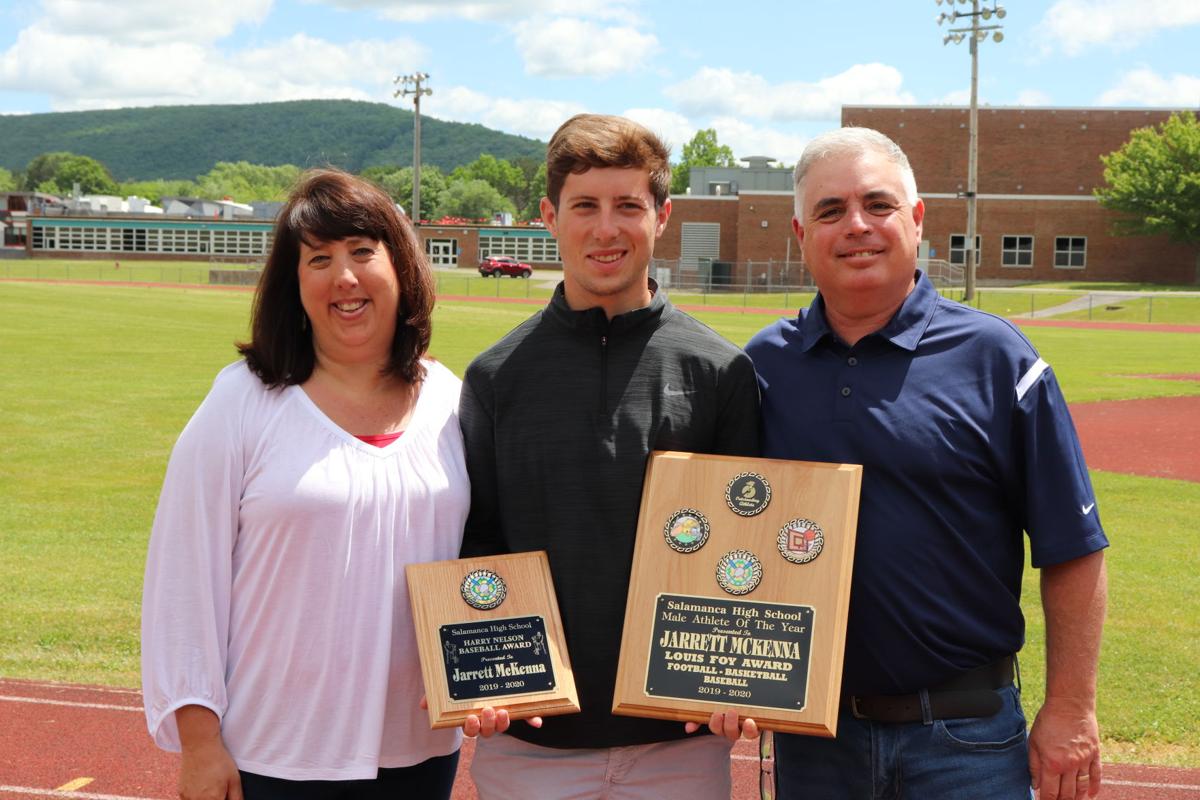 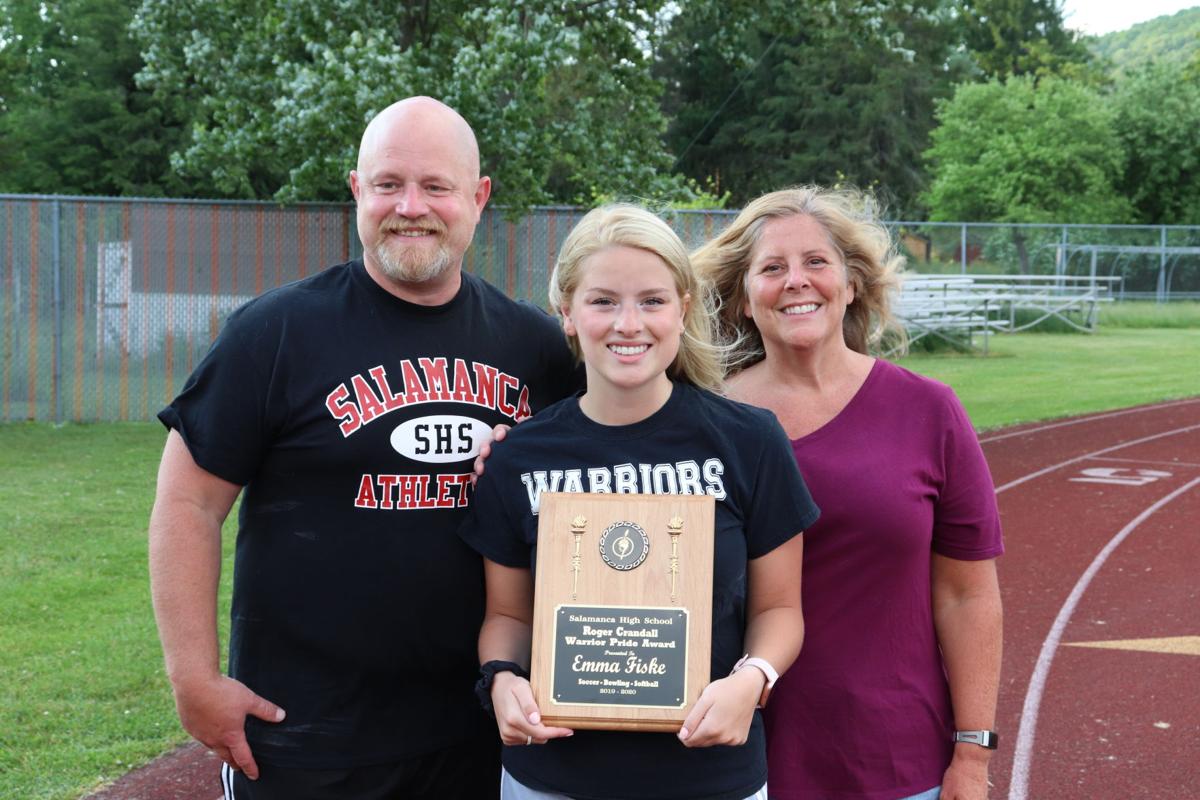 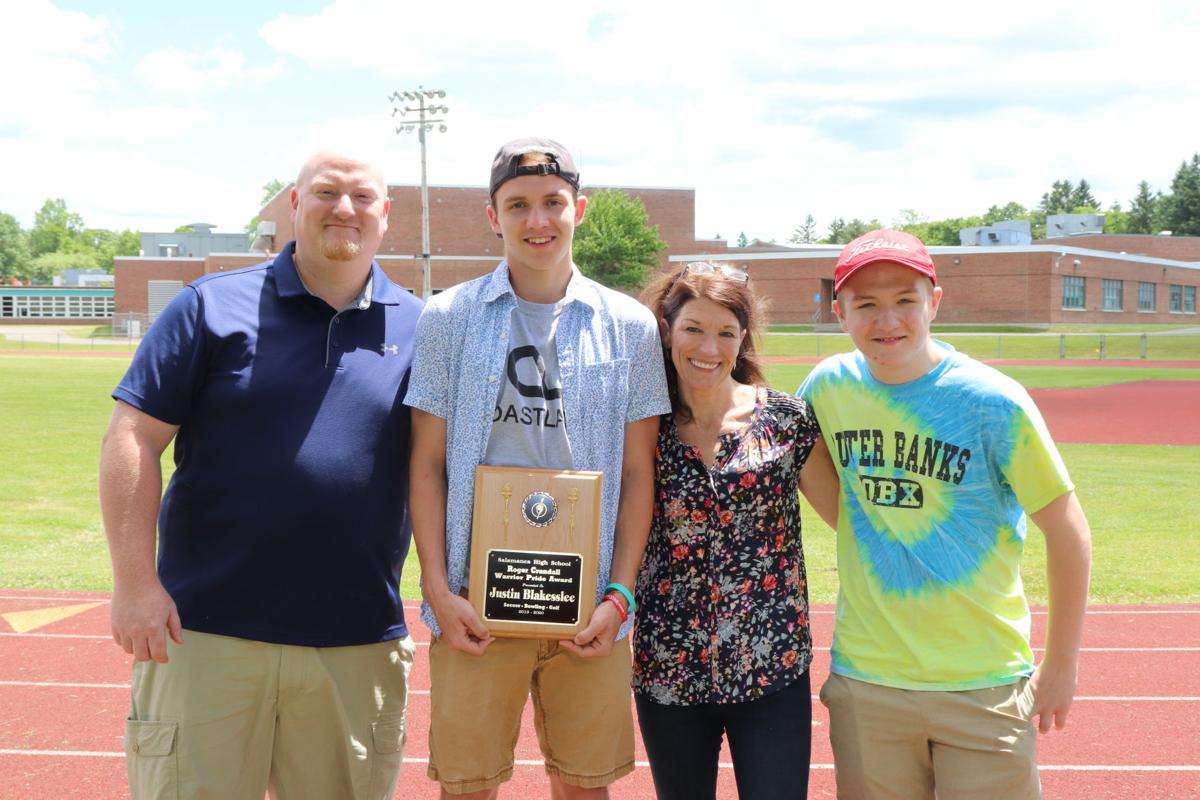 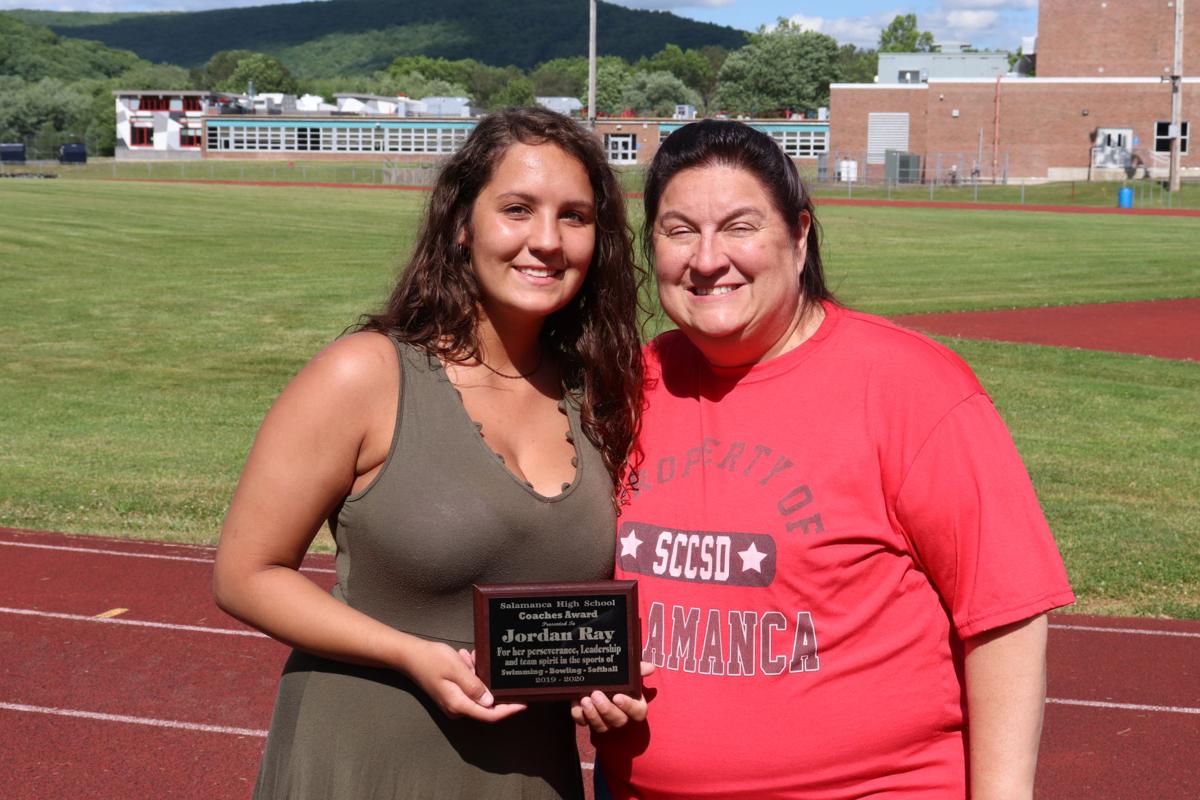 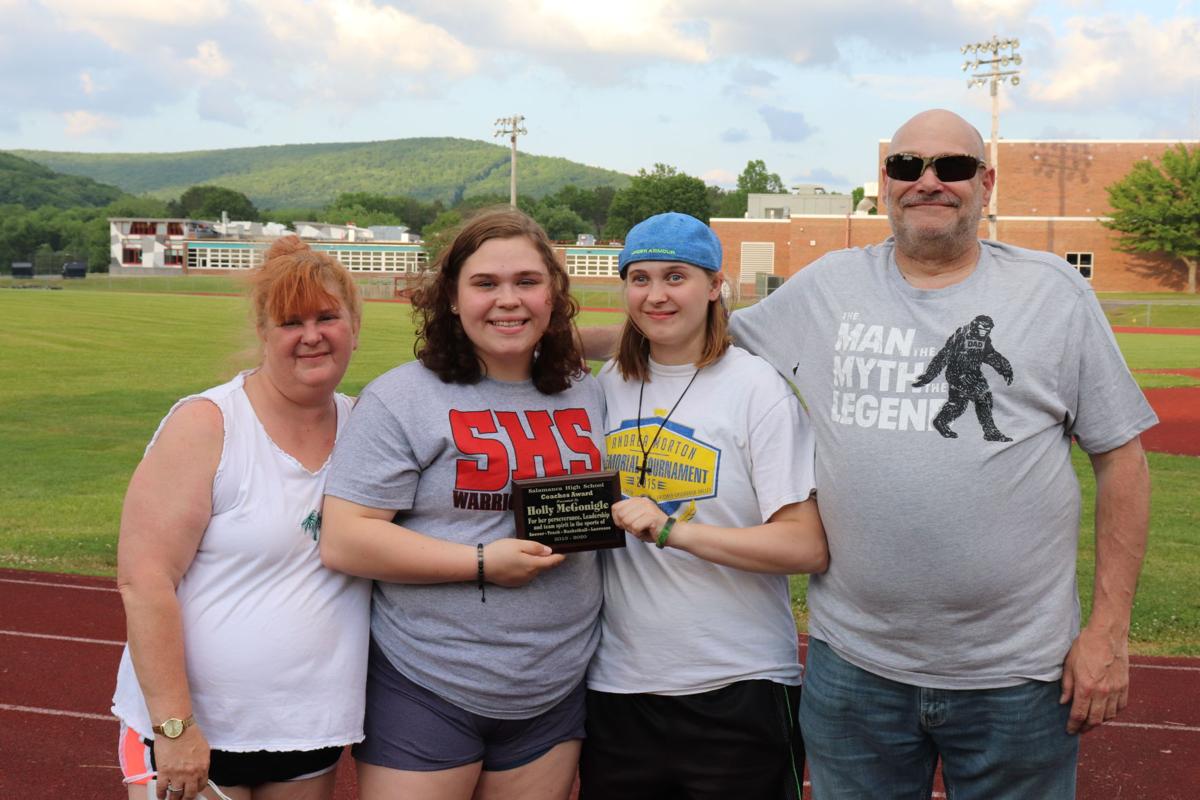 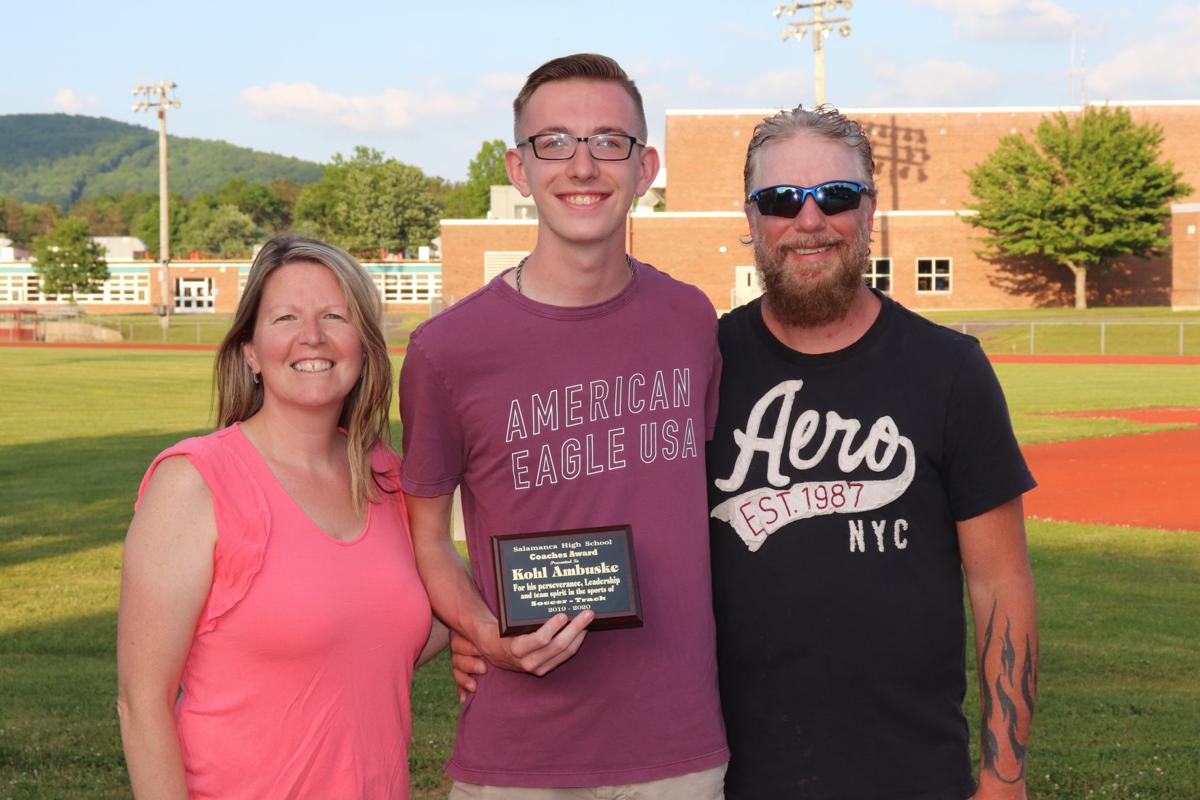 While the Class of 2020 missed out on a spring high school sports season, Salamanca High School was still able to present its annual senior athletic awards last week.

On the football field, McKenna earned first-team Class D league honors and led the team in receptions and yards, and scored two defensive touchdowns. He was a two-year, two-way starter, a captain as a senior and winner of the Kyle Scott Whistle-man Award.

In basketball, McKenna played three years on the varsity team and served as a captain the last two. He won the team’s Coach’s Award as a junior and the Warrior Award for his competitive drive, “Warrior spirit” and work ethic as a senior. He twice earned CCAA East I honorable mentions, scoring 400 points and winning 36 games in his career, eclipsing 150 in both assists and rebounds as well.

“Jarrett’s contributions helped (us) reach new heights, and I will forever be thankful for his drive, determination and effort,” basketball coach Adam Bennett said.

Set to be a captain this year, McKenna was a four-year varsity player, three year-starter at shortstop. He led the 2019 team in on-base percentage, runs scored and stolen bases.

— Hill played six sports, two in each season as a senior: soccer and football in the fall, bowling and basketball in the winter and lacrosse and track and field in the spring.

She served as a captain in girls soccer, leading the team with 14 goals as a senior and earning Big 30 All-Star recognition and fourth team Class C all-state. She twice made the CCAA East I first-team all-stars and was previously a second-teamer and an honorable mention. A five-year varsity player, Hill plans to continue her soccer career at California University of Pennsylvania.

She joined the football team as a senior place-kicker, making 10 of her 16 extra-point tries, including six in one game.

As a starter in her third year of bowling, Hill averaged a 112.9 game for the league champion Warriors, with a high game of 157. She earned the team’s sportsmanship award this season. In basketball, she helped Salamanca win a league championship, recording 39 steals, second in the East 2 league. She often had the task of guarding the opposing team’s top scorer.

As a six-year member of the track and field team, Hill earned numerous track team awards in her career including rookie of the year, unsung hero and most improved.

“Aly has an encouraging spirit which has helped her teammates advance to championships and I watched the true joy Aly has experienced being a part of that,” coach Laurie Lafferty-John said.

He scored four goals as a defenseman this year in soccer, serving as a team captain.

Blakesslee averaged 165.5 for the boys bowling team, marking a 236 in his high game and 550 high series and serving as a captain.

As a four-year varsity girls soccer player, Fiske was a team captain playing defense/midfielder as a senior.

In her fifth year as a bowling starter, Fiske led the league-champion girls team with an average game of 145.8 this season, earning team MVP honors and also posting the team’s season-high game (204) and series (505). She was also an individual All-WNY Scholar Athlete Award winner. She has been a captain since her junior year in softball.