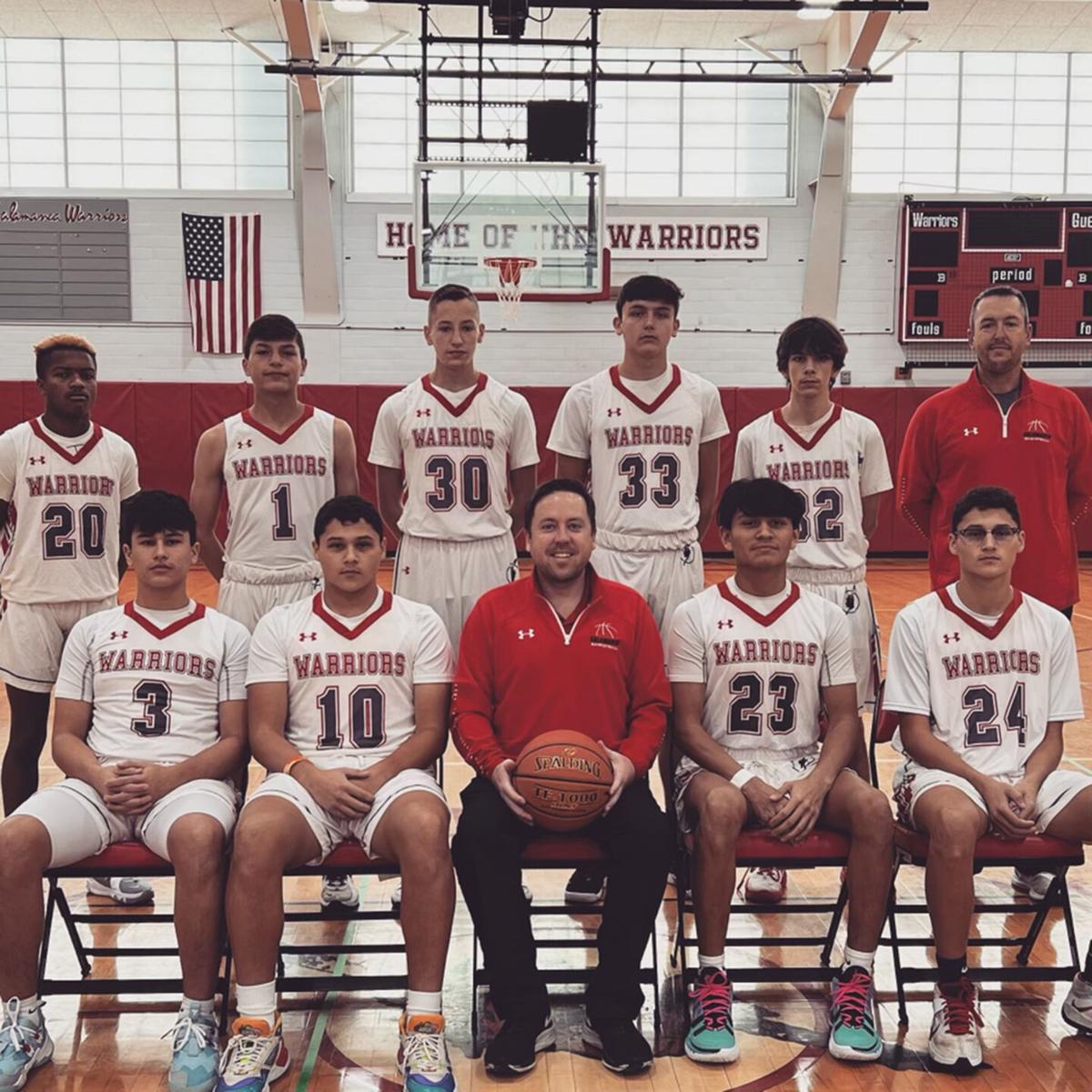 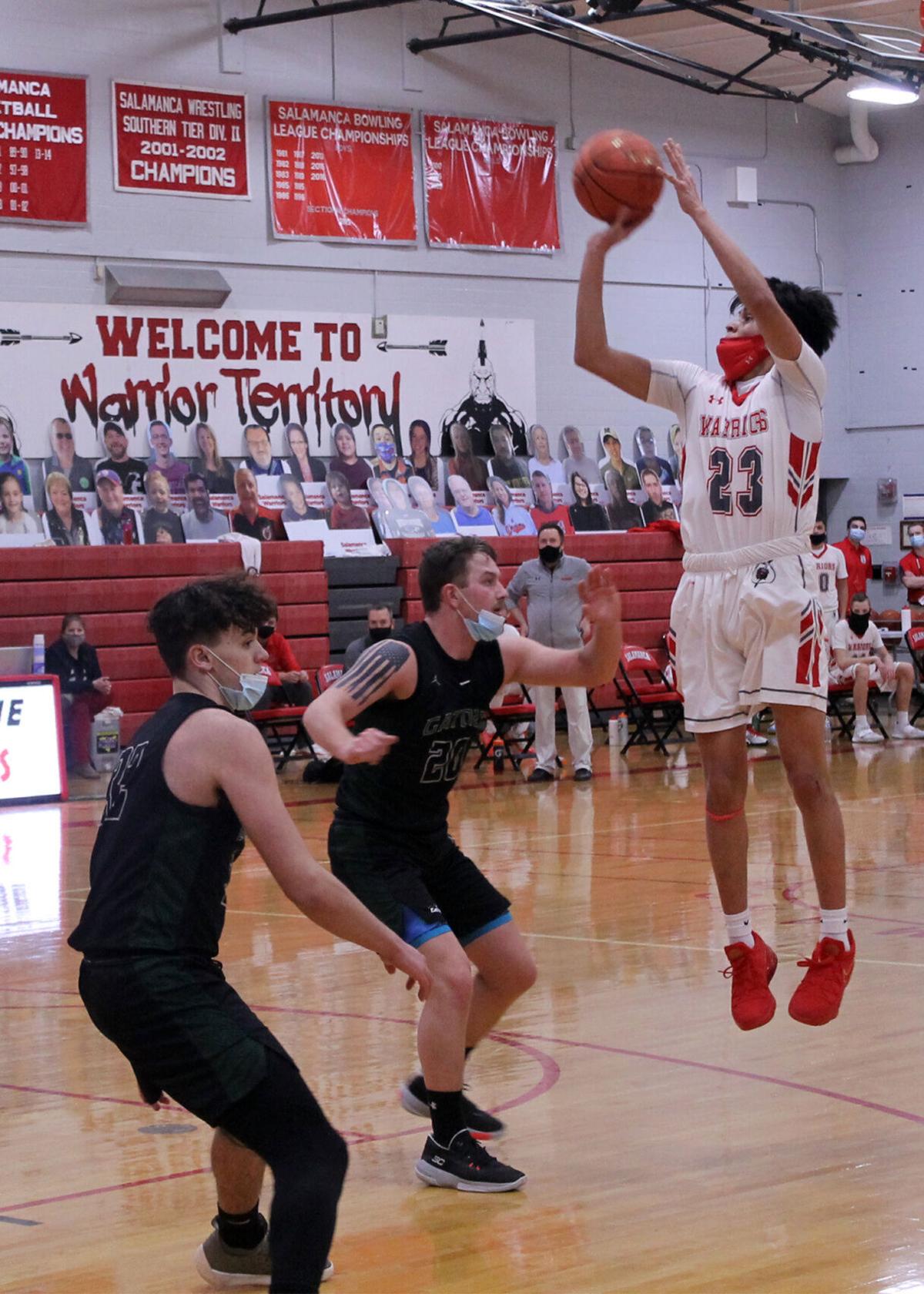 Salamanca’s Lucus Brown (23) is coming off a Big 30 and CCAA West I first-team all-star season as just a freshman last winter.

Salamanca’s Lucus Brown (23) is coming off a Big 30 and CCAA West I first-team all-star season as just a freshman last winter.

The Warriors went 7-8 last year, a record that may not indicate how well they played after moving into a difficult league and playing some larger schools.

“Lucus is really good because of the work that he puts in day in and day out,” said Bennett, a sixth-year coach. “So he had a great season last year but he really dedicated a lot of time in the weight room in the spring and the summer and then he worked very hard in the gym. I think he and I were in the gym about four days a week in the summer and that's all driven by him. We had our team structured stuff that we would play one or two summer league games a week, we would have an open gym a week in the summer .... there were some weeks (when) we were in the gym for six days.

Salamanca will need to replace three seniors (Jarod White, Lucas McKenna, Jarrett Pond) who were second, third and fourth on the team in scoring last winter.

“Any time you lose that kind of scoring, as a coach you're trying to think how it's going to work and who's going to fill it,” Bennett said, “and these five guys together, they just have great chemistry and they share the ball, we're a much different team than we were last year, we play a lot differently, I think we're more versatile on both ends of the floor and I think we can do more in transition. So we're off to a good start, they work really hard and I'm really excited.”

Brown is likely to be joined by a junior (Andy Herrick) and three seniors (R.J. McLarney, Hayden Hoag and Harley Hoag) in the starting five. Brown (6-foot-0) and Herrick (6-foot-3) bring size to the backcourt, while McLarney (6-foot-5) is a tall, athletic big in the middle. So while the Warriors lost much of their frontcourt from last season, they shouldn’t lack size.

“We really still have quite a bit of size, but we're far more athletic,” Bennett noted. “RJ missed the majority of last year with an ankle injury in that shortened season.

“We have a lot of length and we have a lot of athleticism. When you can do that (positions) 1-5, it just allows you to be so much more versatile, especially defensively. We can switch everything, we feel comfortable playing aggressive man, we can play zone, we can play trap. Really last year because of just the personnel that we had we had to try to play a half-court game and walk it up and down the floor and try to play really good half-court offense and defense and this year I think we have the ability to kind of open up the floor a little bit and that's allowed our guys to feel pretty comfortable.”

Bennett expects all of his returners and starters to lead this team. Even as a sophomore, Brown has as much experience as any of his teammates.

Salamanca has a short bench, with just nine active players on the roster. Seniors Alexander Carlson and Kash Ball, sophomore Jaxson Ross and freshman Maddox Isaac, with the youngsters light on experience but eager to earn a role off the bench.

Salamanca remains in the CCAA West I competing against all Class B schools, including some perennial sectional contenders: Allegany-Limestone, Dunkirk, Fredonia, Olean and Southwestern. The Warriors of course hope to compete for the division, but will focus more on their improvement as a group this year.

“Our goal is to focus on our process and just work to get better every day,” Bennett said. “I'm a big believer that the reason we made the jump to this league is because we knew the quality of reps that we would get throughout the season and that's going to prepare us for our playoff season better than anything can. They're all good teams in the league, there's no pushover, every night's a battle and that's what we want. We have the ability to accomplish some good things this year but our goal is take control of the process and allow the results to take care of themselves.”

Last season, like all other high school hoops teams, the Warriors had very little time together before practice began for a condensed season: most summer leagues and camps were canceled in 2020 due to COVID-19 concerns. Salamanca took full advantage of more opportunities the following summer, with trips to Penn State-Behrend and Niagara County Community College and a strong showing in the Warriors’ summer league.

“We played 19 games in the summer and in the course of a normal season we play 20 games, so really our guys and we had everybody there basically every night, they got in a full season of basketball in the summer,” Bennett said. “From a repetition standpoint that allows you to start at a far more advanced place than you normally would. We're able to do more complex things early on in the year because of the summer that we've had but we've also told the guys that the only thing that a good summer does is put you in a position to have a good start of the year. Now we've got to work really hard and execute to make sure that we do have that good start.”

(all varsity games 7:30 unless otherwise indicated)