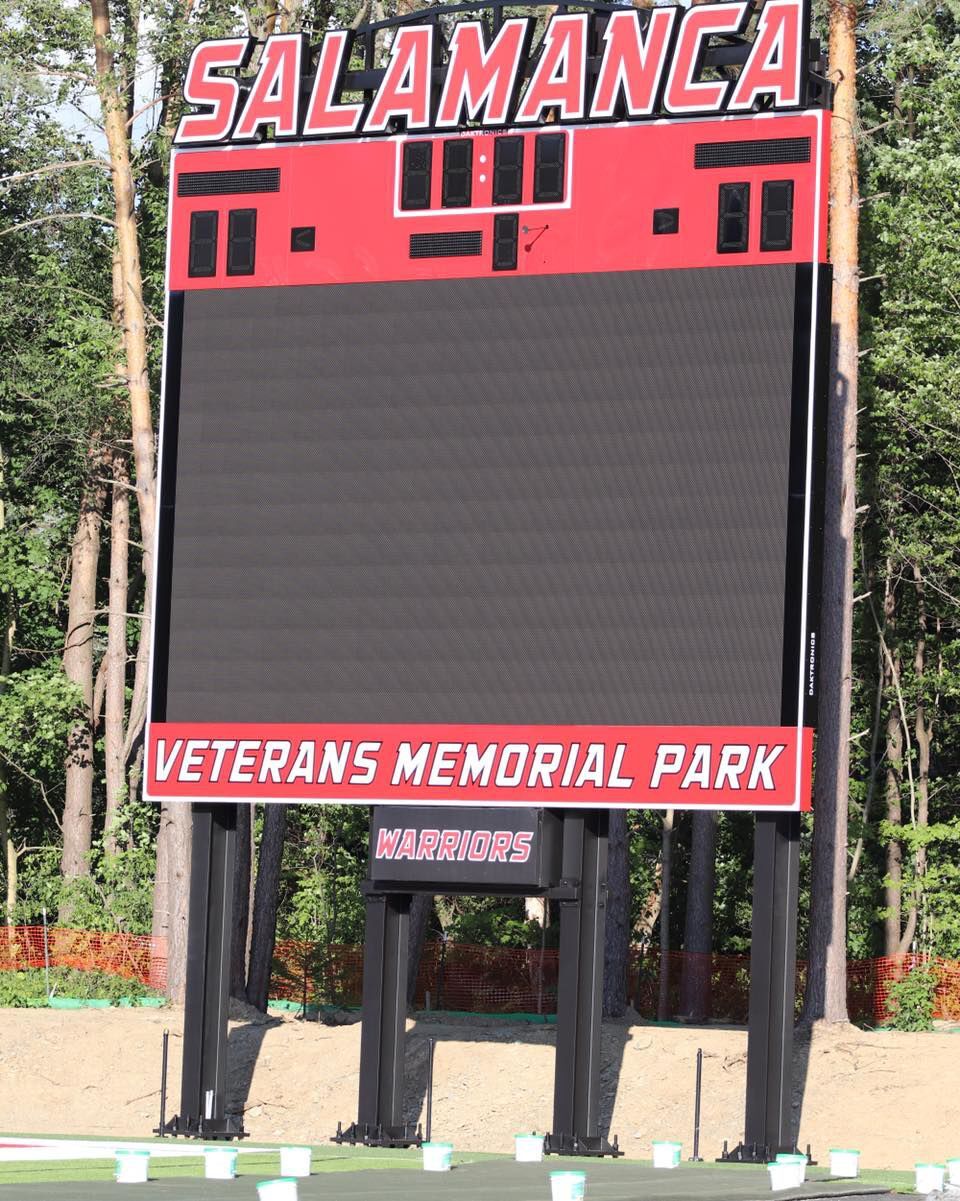 The new video scoreboard at Veterans Memorial Park, at 33 feet tall and 32 feet wide, will be the largest high school video board for high school sports in the state, according to district officials. 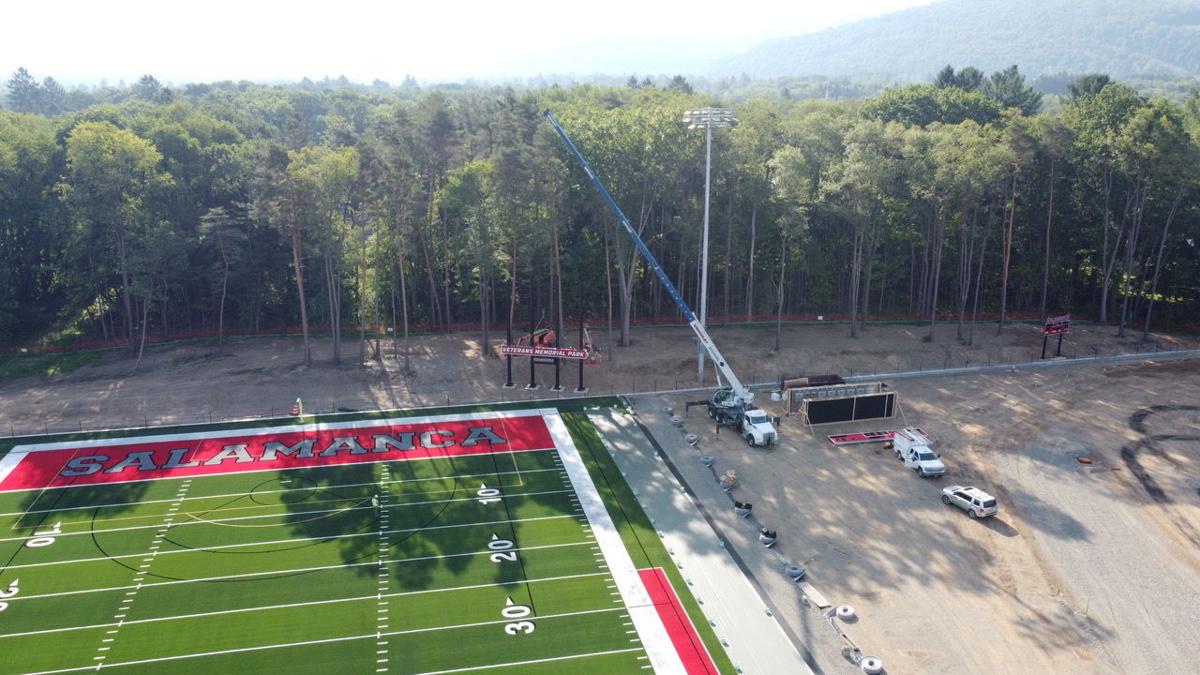 Contractors install the video scoreboard as part of the renovations at Veterans Memorial Park in Salamanca. 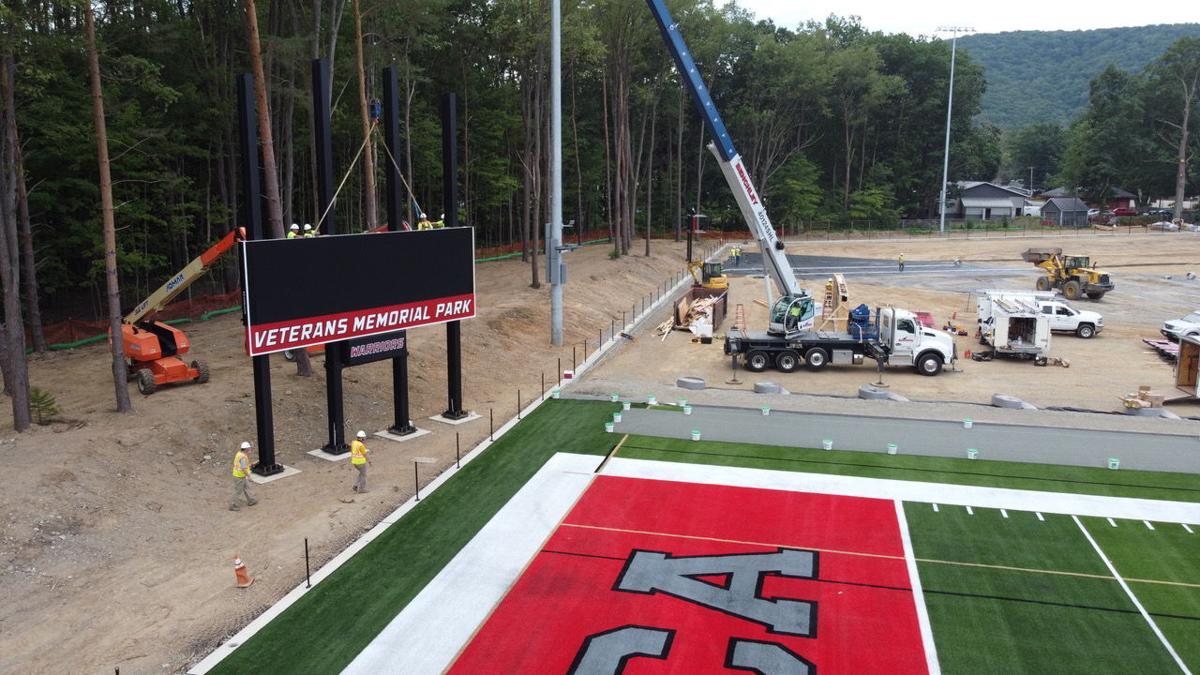 Above and below: Contractors install the video scoreboard as part of the renovations at Veterans Memorial Park in Salamanca.

The new video scoreboard at Veterans Memorial Park, at 33 feet tall and 32 feet wide, will be the largest high school video board for high school sports in the state, according to district officials.

Contractors install the video scoreboard as part of the renovations at Veterans Memorial Park in Salamanca.

Above and below: Contractors install the video scoreboard as part of the renovations at Veterans Memorial Park in Salamanca.

SALAMANCA — The next time a Salamanca football player scores a touchdown at Veterans Memorial Park, chances are he’ll be able to look up to watch a replay of his feat.

School district superintendent Bob Breidenstein said a new 33.3-by-32-foot video scoreboard, part of the ongoing renovation project at Vets Park, is the largest of its kind for high schools, citing Toth Sports, which recently installed the screen, and manufacturer Daktronics.

“It’s a fully integrated video scoreboard,” Breidenstein said. “It can do replays, highlights, touchdowns or plays. It’ll be linked to a state-of-the-art digital system and it can show movies; it’s linked to the internet. It’s just like a ginormous computer screen. Anything that your computer screen can do, we can probably do on that. It is state-of-the-art.”

Breidenstein said on nights the fields aren’t in use, the district plans to offer movie nights on the big screen.

“And the lighting system is also incredibly high tech,” he said. “It will light the field up, both the multi-purpose field, the box lacrosse fields and the baseball field, just like it’s daylight. There’s virtually no spillage of the lights into the community or elsewhere, so it will be like the kids and the athletes and the events are playing center stage under a spotlight. And (there are) a few other tricks we’ve got up our sleeve that we’ll unveil at the ribbon cutting in April.”

THE MAIN multi-purpose field, recently installed on turf, will be able to hold football, soccer and lacrosse games, while a new baseball field and two smaller box lacrosse fields will soon follow.

“We’re right on schedule, maybe even just a little bit ahead of schedule,” Breidenstein said. “The main, multi-purpose field is completely done, with the exception of a little bit of follow-up work on the logo at midfield, and the scoreboard is in, the lights are in and the turf company had to remobilize while they finish the baseball field understructure. They’ll be back on site to finish the baseball field and the box lacrosse fields on approximately Aug. 31.”

“Honest to gosh, (when) you actually go over there and walk out on the field, you feel like you’re in a college atmosphere,” Morton said. “It’s awesome. You don’t have the same sense that you normally do sitting in Vets Park. It’s a whole different feel to it now, and I’m just standing on the football field and the baseball turf, none of that’s been laid down or the turf for the box lacrosse practice fields. They have two scoreboards for the box lacrosse field, the football scoreboard and the baseball scoreboard set up. And they’re building the press box for the baseball field.

“When this thing gets done, it’s going to be amazing. It’s just going to be so exciting to actually be able to have our kids out there playing on such a beautiful complex. I think our parents, our community, our athletes, our coaches, there’s some excitement in the air about it all.”

BREIDENSTEIN said he expects Vets Park to be finished by April, with a public ribbon cutting set for April 12. Until then, he doesn’t expect fall sports teams to be able to practice on the new fields if and when a season begins, but said the district plans to give teams a chance to visit the fields.

“We are in conversations with the contractors and the construction management firm Turner Construction to probably, at some point in time, we would like to get the kids out there,” he said. “We’ll have to do some staging and coordination, but because of safety factors, it’s not going to be open for the kids to practice out there every day, but I’m sure as an incentive, we’re going to be able to coordinate with the contracting companies and get the kids out on the field at least once to just see it. That’s probably a good six weeks away, so that’s not something that for safety reasons could happen any time soon. But I’m sure that we’ll at least be able to get out there for a site visit with the athletes and coaches.”