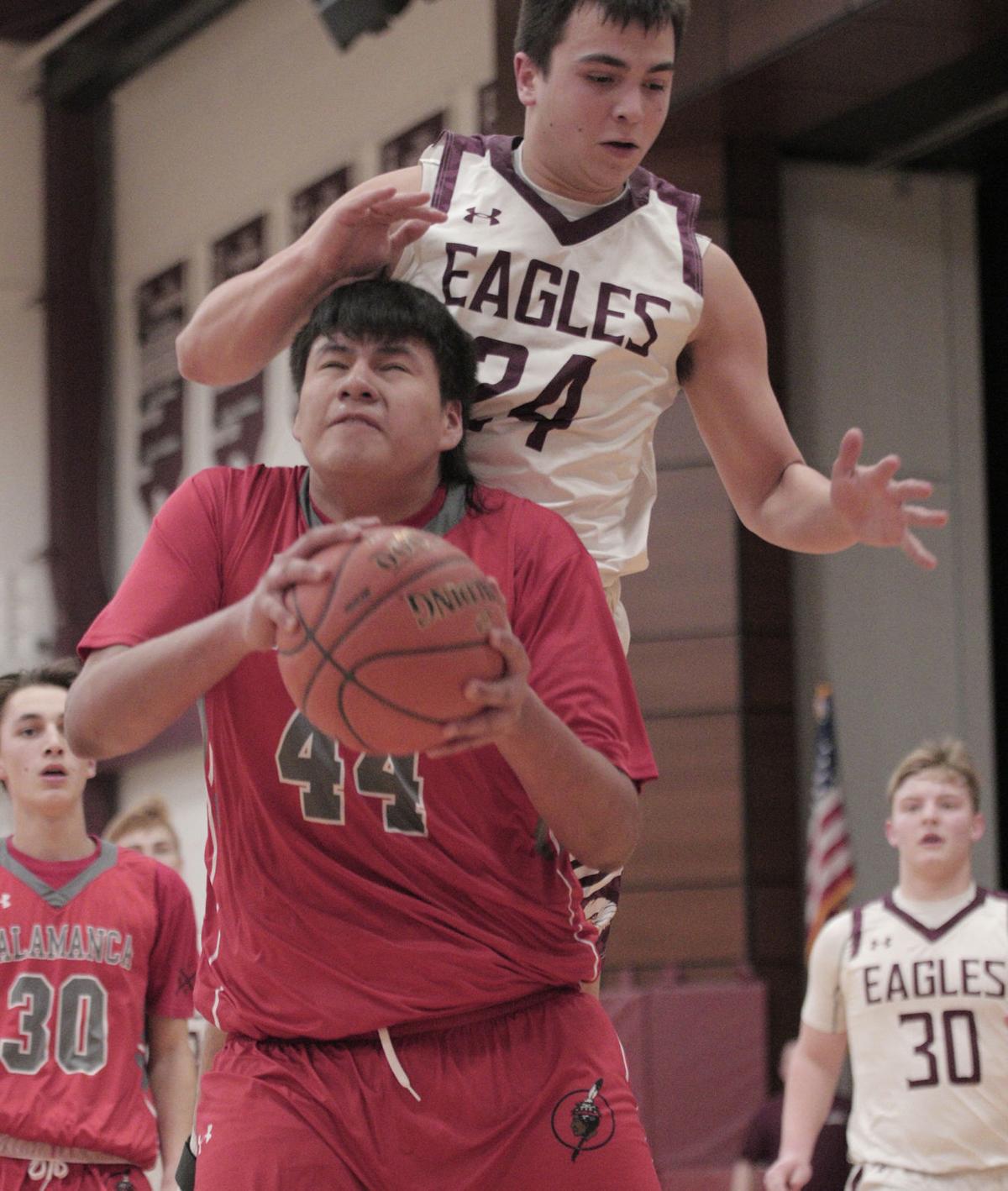 Salamanca’s Jarod White (44) draws a foul by Ellicottville’s Wyatt Chudy (24) while grabbing a rebound during a non-league boys basketball game Thursday in Ellicottville. 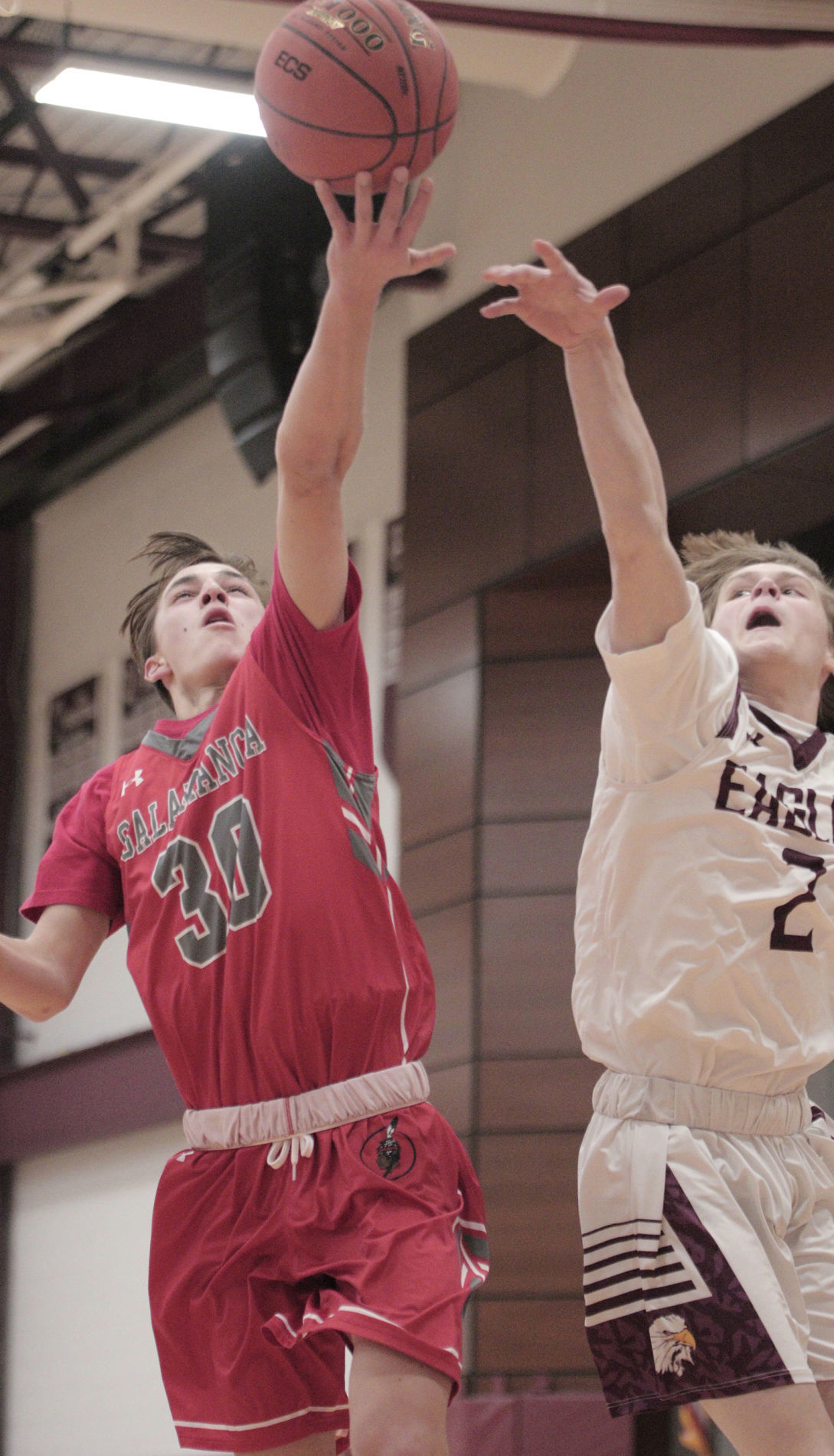 Salamanca’s Aaron George (30) goes up for a layup and draws a foul against Ellicottville during a non-league boys basketball game Thursday in Ellicottville. 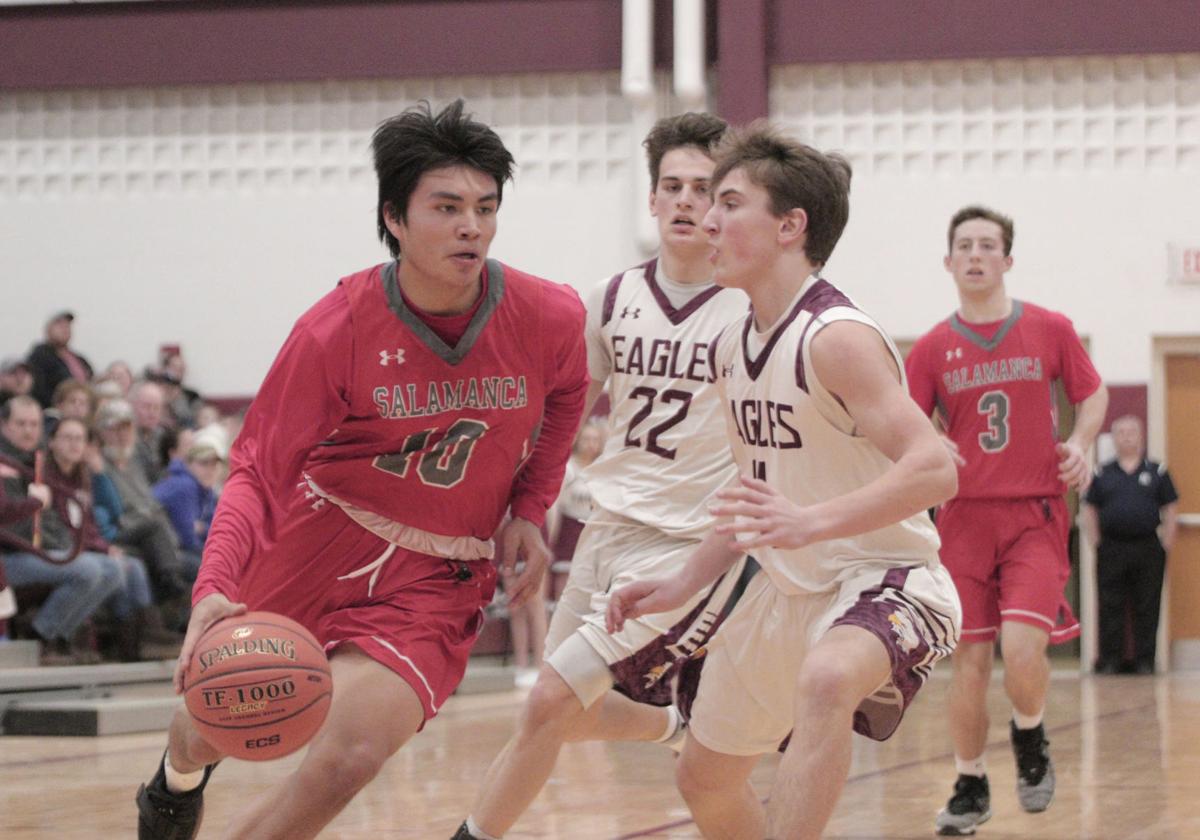 Salamanca’s Isaac Brown (10) drives by the Ellicottville defense on the way to the basket during a non-league boys basketball game Thursday in Ellicottville. 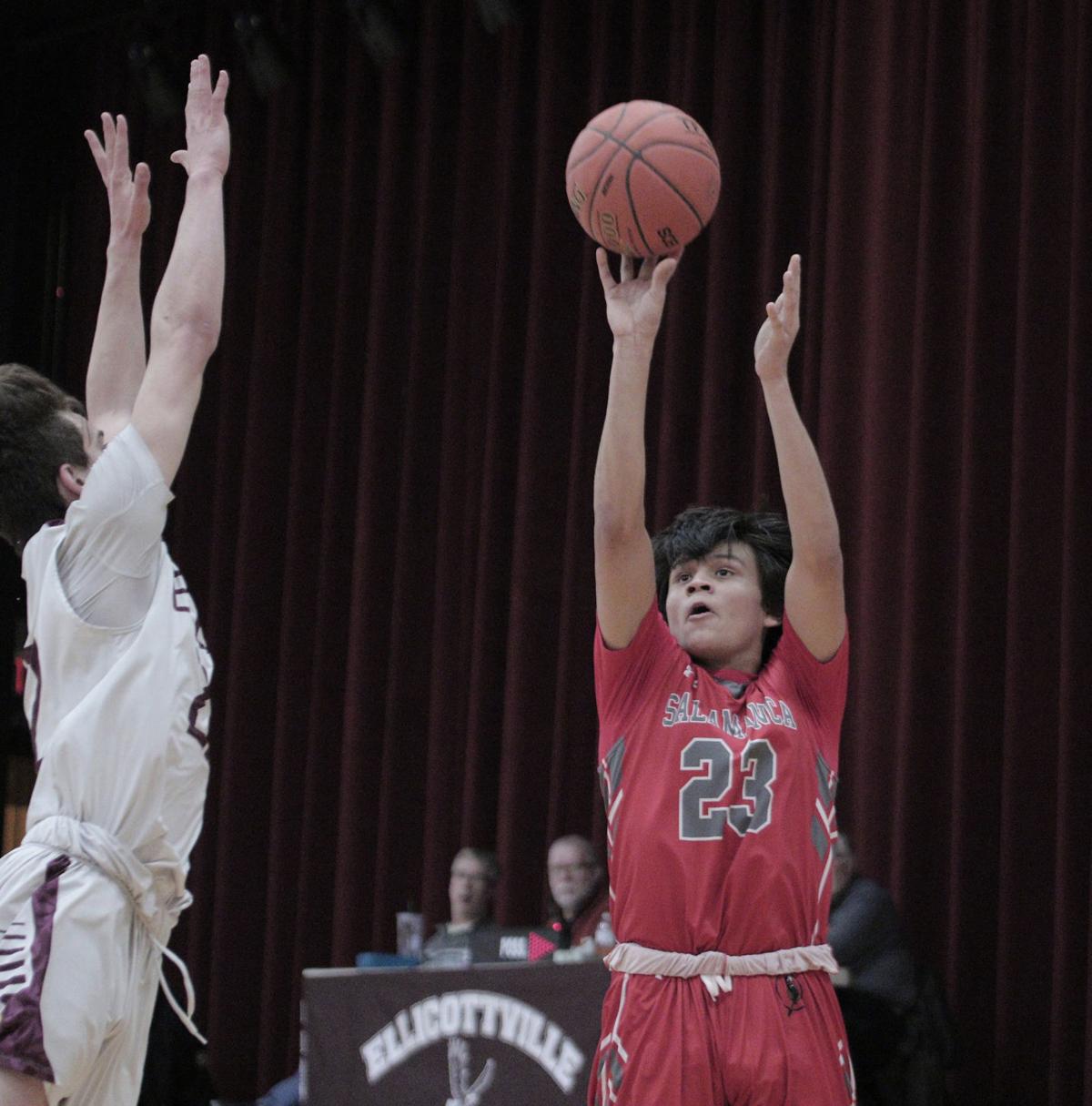 Salamanca’s Jarod White (44) draws a foul by Ellicottville’s Wyatt Chudy (24) while grabbing a rebound during a non-league boys basketball game Thursday in Ellicottville.

Salamanca’s Aaron George (30) goes up for a layup and draws a foul against Ellicottville during a non-league boys basketball game Thursday in Ellicottville.

Salamanca’s Isaac Brown (10) drives by the Ellicottville defense on the way to the basket during a non-league boys basketball game Thursday in Ellicottville.

The Warriors held Ellicottville, one of the top seeds in C2 after a 10-0 run through its CCAA East II schedule, to just four points in the first quarter, jumping out to a 19-4 lead, and leading by as many as 19 in the second quarter. Ellicottville made a few runs to cut the lead as short as nine, but never any closer as Salamanca rolled to a 68-48 victory Thursday night in a non-league regular season finale at The Ward.

“Our whole thing was to start fast defensively,” Warriors coach Adam Bennett said. “In order to win in the playoffs, you’ve got to be able to defend and rebound. Our message to the kids in the locker room was we have to come out and play the best defense of the year and I thought we did. We held them to four points in the first quarter. They’re too good of a team not to make runs. What I love is every time they made a run, we made a run right back at them and we held it into that double-figure range.”

“Our kids just played really hard,” Bennett said. “I thought we did a good job on the boards and we played good, solid team defense against a great team. They’re 16-4, that’s a very good, very well-coached team and to come in here defend like that is a good sign for us going to the playoffs.”

Salamanca will take a five-game winning streak into its playoff opener at No. 4 Westfield next Friday.

“We’ve been playing hard all year, but all year long, they’ve been dedicated to cleaning up the little things, to making sure the details are taken care of and that’s starting to show now,” Bennett said of his team’s season-ending hot streak. “The way that we’re playing, the details are taken care of and good to go. That allows you to play good, solid team defense. What I really love offensively is we’re assisting on almost every basket. We’re sharing the basketball, we’ve got a bunch of guys in double figures and they trust each other. So when you play hard, you take care of the minor details and you trust each other, good things happen.”

Salamanca limited its turnovers to prevent easy transition baskets for Ellicottville, and found ways to beat the Eagle’s trapping zone, usually with White.

“They trap and they extend their zone, they make it difficult for you, but that’s where Jarod comes in handy,” Bennett said. “We can get the ball to the high post and get it down low and take advantage of those traps. They made a couple runs in the first half where they were turning us over and getting layups, but our guys did a good job of handling their press — they press for the majority of the game — and then we were able to get it to the right spots, zone-wise to beat their pressure and take care of that extension in the zone.”

Ellicottville got the lead down to 45-35, late in the third quarter, but Salamanca put the game away with a 14-2 run, leading 59-37 just two minutes into the fourth.

“It was a number of things,” Ellicottville coach Dave McCann said of being unable to rally against the Warriors. “We struggled so bad offensively in the first quarter. We were just playing way too passive, just not really handling ball pressure and not looking to attack enough. Then we get in a situation where we have to play really small there, rebounding was tough all night, they kicked our butt on the boards and it seemed any time we could momentum or get a little run going, they answered it. They have a pretty good team, they’re playing pretty good basketball right now and I think it was tough for us to sustain any sort of run tonight.”

Ellicottville will play either Frewsburg or Maple Grove next Friday, based on a coin flip at Saturday’s seeding meeting.

“We’ll have to learn from it and work on different things that we didn’t do well tonight and just get better for next week,” McCann added. “We get a week off coming up here before we play next Friday, so we’ll have to work on it.”

Rain showers early changing to snow showers for the afternoon. High 38F. Winds WNW at 10 to 15 mph. Chance of precip 60%. Snow accumulations less than one inch.