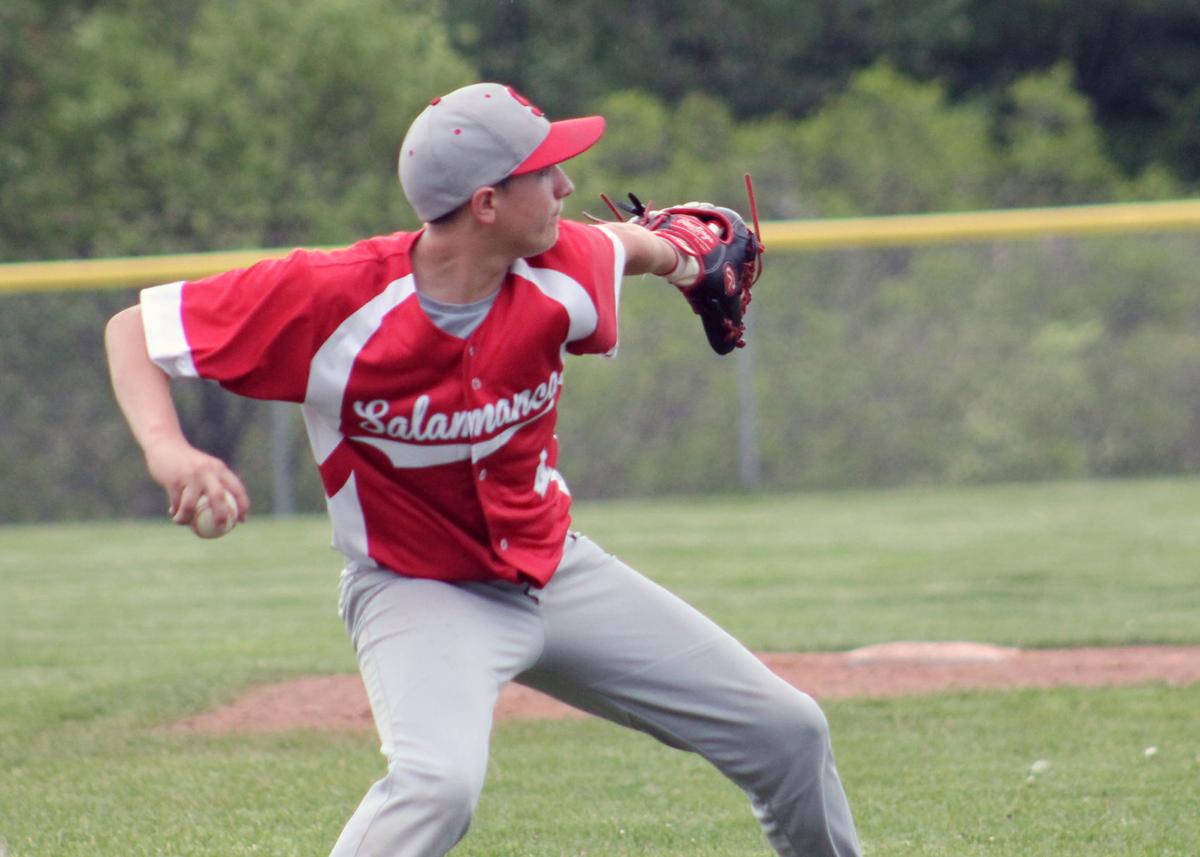 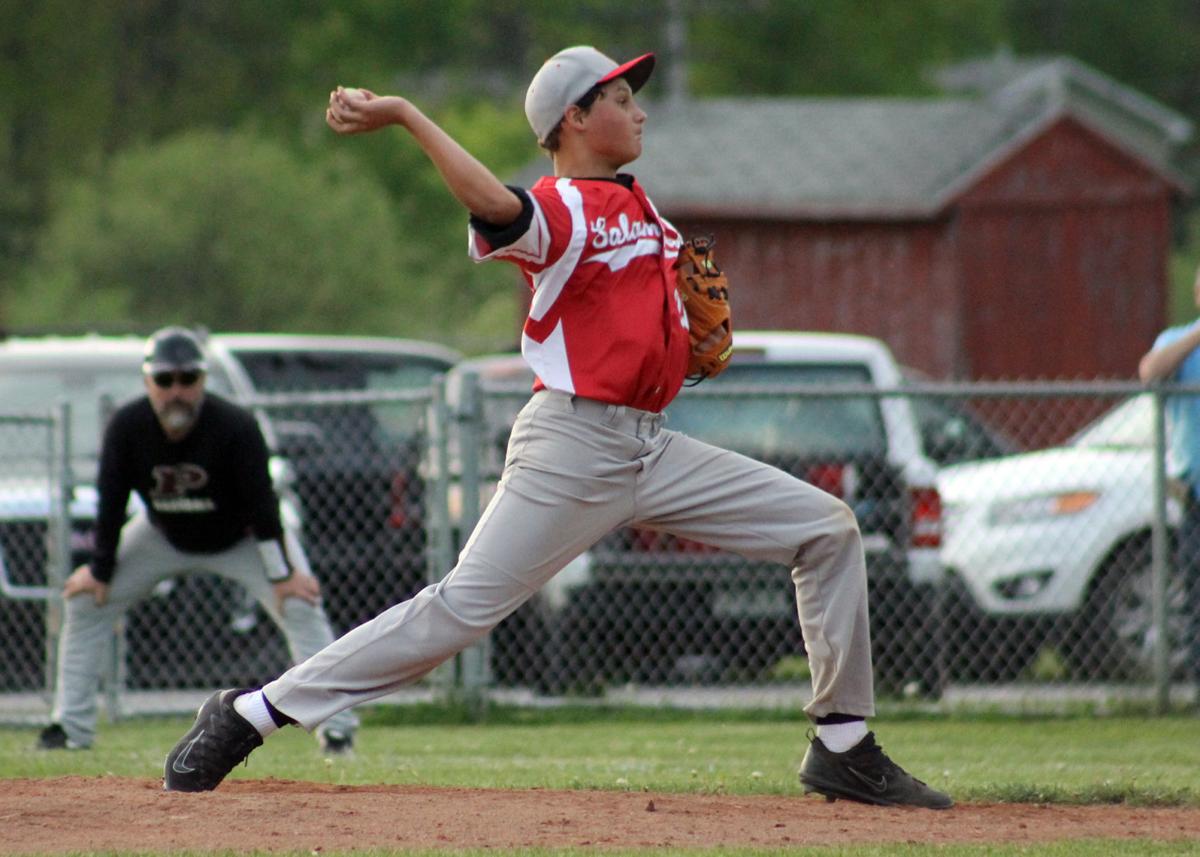 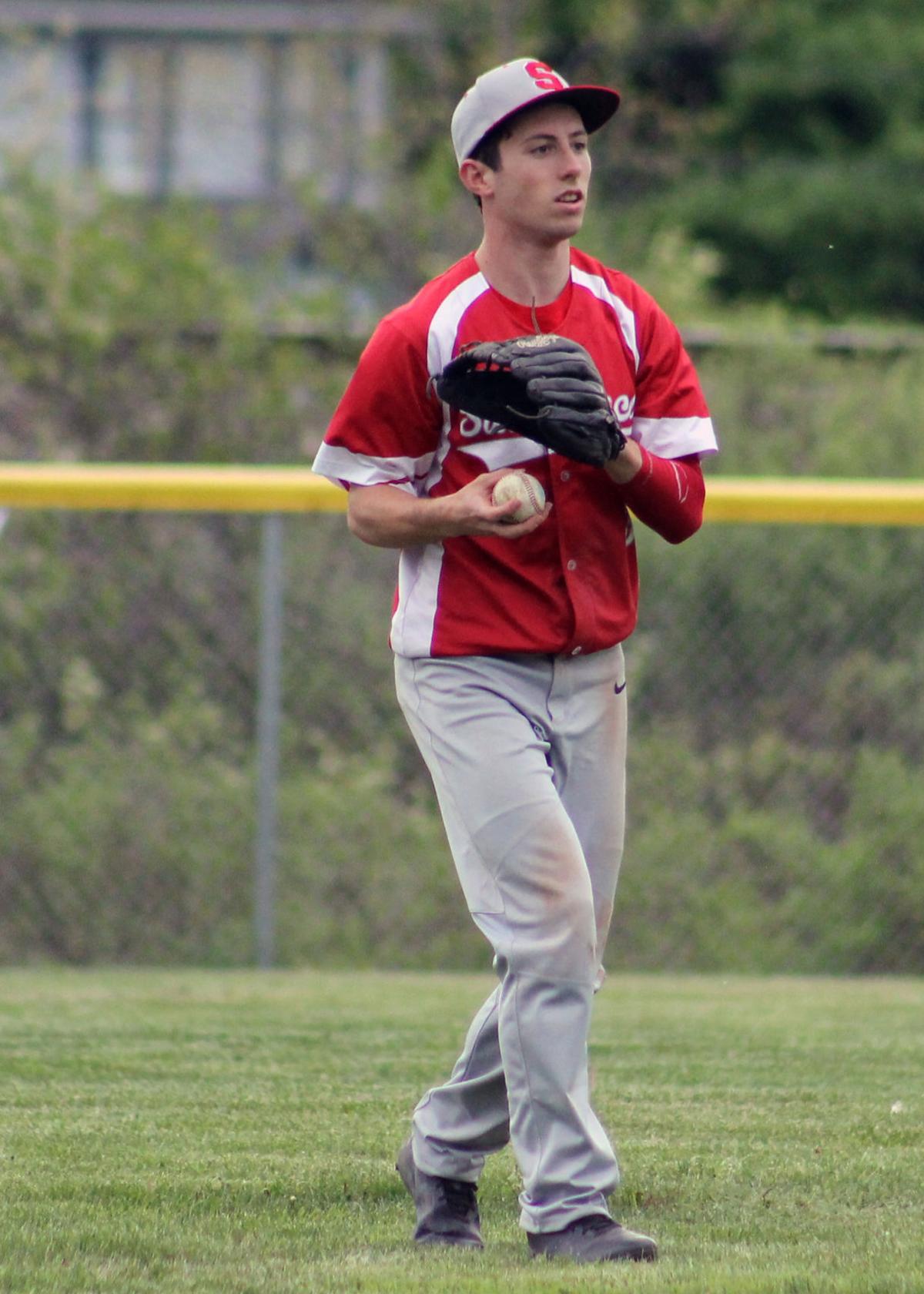 Salamanca’s Jarrett McKenna throws the ball in after making a catch in the outfield during a Section 6 Class C baseball playoff game against Portville on Friday. 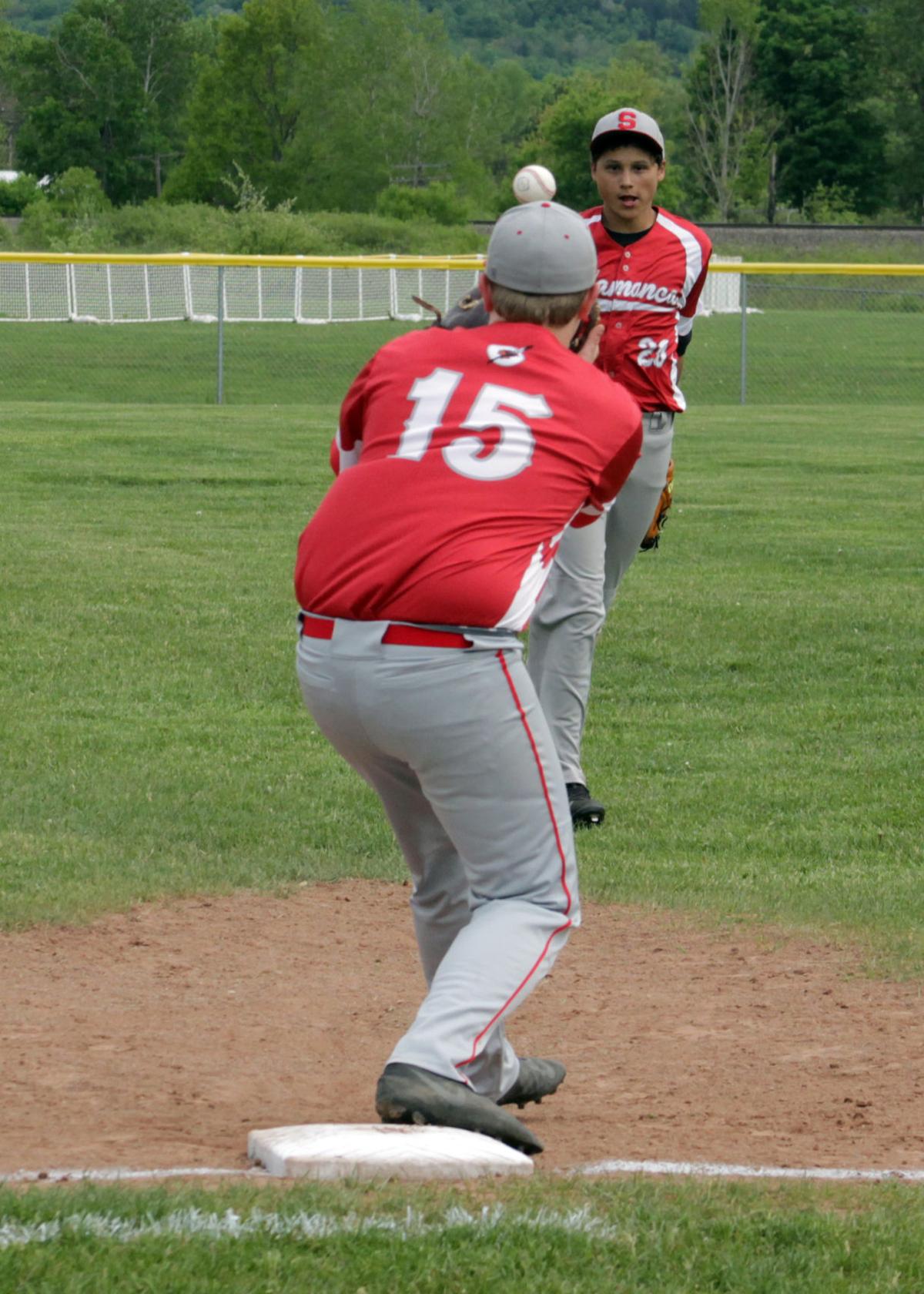 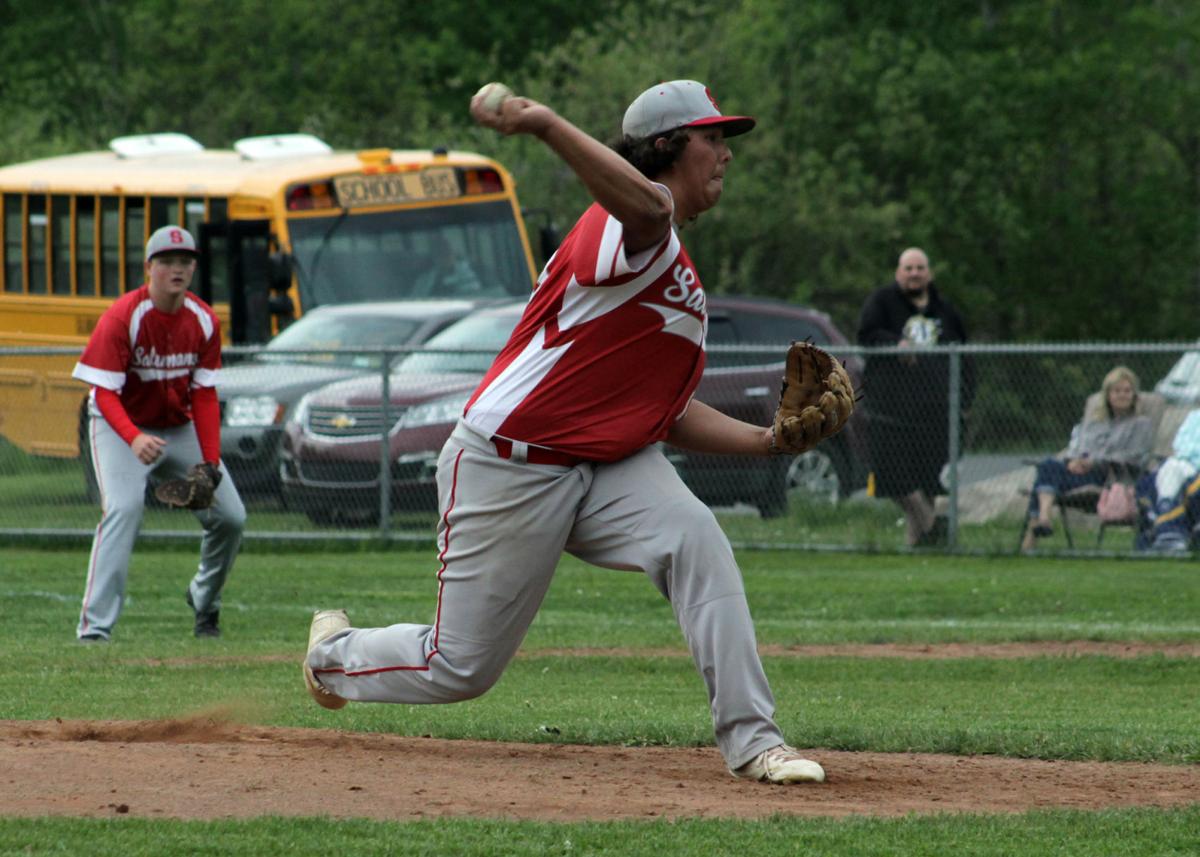 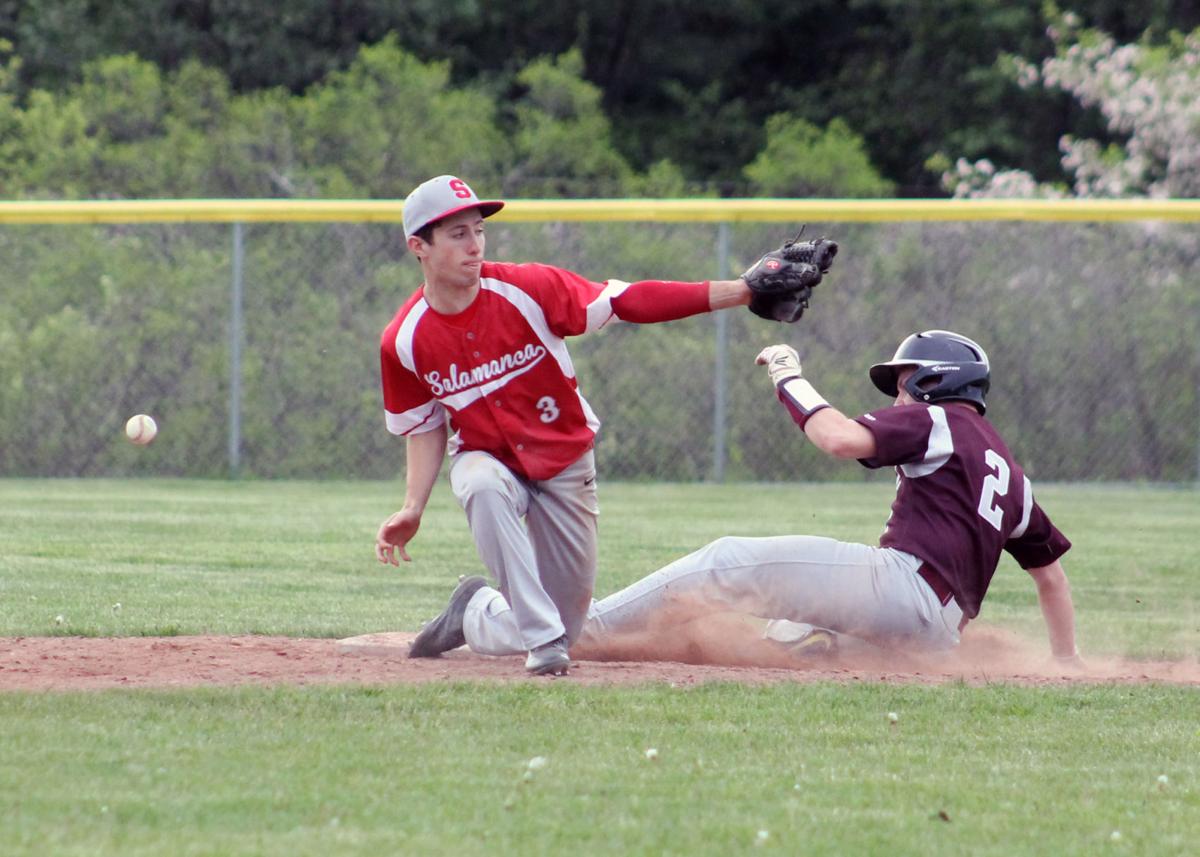 Portville’s Michael Stillman (2) slides safely into second base as a throw gets past Salamanca shortstop Jarrett McKenna (3) during a Section 6 Class C baseball playoff game Friday in Portville.

Salamanca’s Jarrett McKenna throws the ball in after making a catch in the outfield during a Section 6 Class C baseball playoff game against Portville on Friday.

Portville’s Michael Stillman (2) slides safely into second base as a throw gets past Salamanca shortstop Jarrett McKenna (3) during a Section 6 Class C baseball playoff game Friday in Portville.

PORTVILLE — This was a matchup Mike Matz hoped to avoid.

Even though the Portville baseball team had beaten Salamanca twice this season in CCAA East I play, the Warriors lingered as a dangerous playoff team in Matz’ mind, especially after the Panthers won a 2-0 nailbiter against them on April 30. And sure enough, the Section 6 Class C seedings placed the No. 10 Warriors at No. 7 Portville for Friday night’s first round game.

If not for a seven-run second inning, Portville’s season may well have ended on Friday. But the Panthers withstood some early offense from Salamanca, which scored one run each in the first three innings, and used that big second inning to hold on to an 8-5 victory.

“They came out swinging the bats right away,” said Matz, the PCS coach. “It’s funny, I was about to text Smitty (Warriors coach Mike Smith) and ask him, because they were a little late getting here, I was about to text him and ask him where they were and the last text message I sent to him was after we beat them down here 2-0. It said, ‘Man, I’m glad we’re done with you. I don’t want to see you in the playoffs,’ and I thought, ‘Nah, I’m not gonna text him that.’ So it’s kind of interesting that that was our last one-on-one text message. But they came out swinging it, and played with confidence, good pitching, good defense. They’re doing a nice job.”

Down 2-0, Portville rallied in the bottom of the second, scoring all seven runs with two outs. The Panthers scored on a pair of bases-loaded walks, a dropped third strike, a two-run single from Nathan Kloc and a two-run double from Dakota Mascho.

Portville worked four walks against Salamanca pitcher Andrew Colburn in that inning, displaying a patience the Panthers have worked on all year.

“It’s something that coach (Carl) Hollamby has been preaching through the entire season, ‘Take pitches, take pitches, work the pitcher, work the pitcher,’” Matz said. “And it’s hard when you’re young to do that because you get so jump and so excited like, ‘Oh, man. I’m up to bat.’ But yeah, I think they finally see when we do take pitches, good things do happen. All that was with two outs and that’s the most productive we’ve been with two outs all year.”

Kloc (3 RBI) and Mascho (double, 2 RBI) both went 2-for-4 for the Panthers. Brandon Murray added a double and an RBI.

For Salamanca (3-12), Lucas McKenna went 3-for-4 with a pair of RBI doubles. Harley Hoag also doubled for the Warriors.

“Nathan Kloc may not have been his sharpest tonight,” Matz noted, “but he was a good senior and a good leader and good pitchers can gut it out when they don’t have their best stuff and I think he did that tonight. Nathan Petryszak as a ninth grader, man, he’s just come on and been lights out all year. I couldn’t be happier with him, how he’s pitched for us so far.”

Smith, the mayor of Salamanca, said he liked his team’s response to the “kind of ugly” second inning.

“Great game. Great game,” Smith said. “One kind of ugly inning, but we came back, we didn’t hang our heads, we battled back. Our kids did not hang their heads. I’m more proud of them than anything there. I didn’t know that this team had that big of hearts. We grew those hearts this year and I’m damn proud.

Salamanca lost its home-opener, 10-0, to the Panthers.

“We battled back,” Smith said. “There’s the difference. If we give up seven runs the first two weeks of the season, we’d have been head hanging and ‘Oh my God,’ woe is us. We didn’t and we came in here and said alright, scribble that page out and here we go. And they did a hell of a job. I was very impressed.”

While Salamanca graduates five seniors, it returns an overwhelmingly young core. The Warriors started four seniors, a junior, a sophomore and three freshmen in the playoff game.

“It was a great year,” Smith said. “Thank the coaches, thank Clyde, J.C. and Bob Quinlan, and the seniors.

“The foundation has been laid, I believe. The five seniors went through all those ugly years and they were solid for us and they helped us build. The future's so bright I've got to wear dark glasses in the sun. The Hoags (Harley and Hayden) and (Shawn) Bacelli and Zaron Tucker and Malachi Harrison, Carter Stoltz, we are so young that these kids (can come back) and a good group of modifieds coming.”

Cloudy skies early, then partly cloudy in the afternoon. Temps nearly steady in the upper 30s. Winds W at 5 to 10 mph.