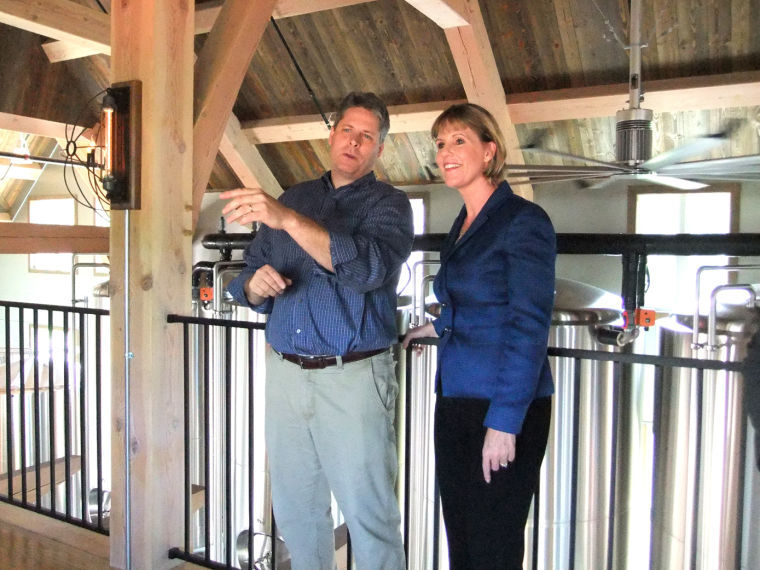 With the fermenting tanks of the new brewery behind them, EBC owner Peter Kreinheder points out the new patio bar, as seen through the brewery window, to Senator Catharine M. Young. 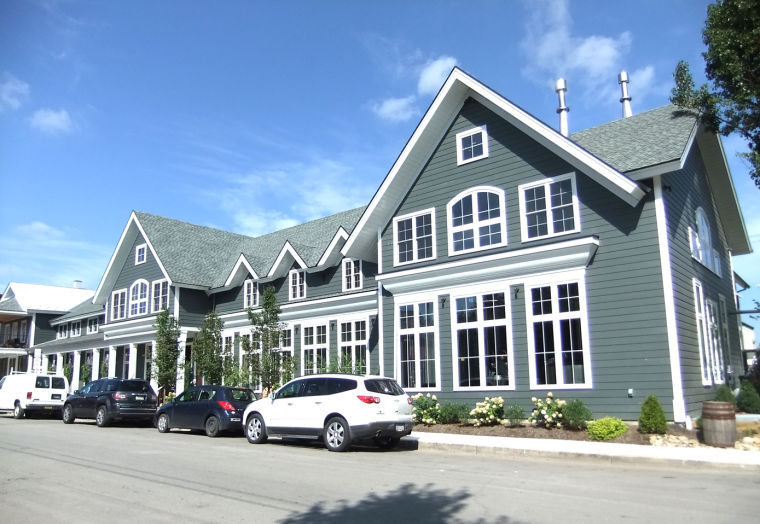 The exterior of the recently addition of Ellicottvllle Brewing Company on Monroe Street in Ellicottville.

With the fermenting tanks of the new brewery behind them, EBC owner Peter Kreinheder points out the new patio bar, as seen through the brewery window, to Senator Catharine M. Young.

The exterior of the recently addition of Ellicottvllle Brewing Company on Monroe Street in Ellicottville.

Owner Peter Kreinheder said the new “timber frame” expansion was constructed by Timberbuilt, a North Collins-based company that created a brewery addition, beer garden and dining design for EBC. He said the timbers came from the Pacific Northwest and were shipped to North Collins, where they were whittled, arched and matched. Then, a year ago last September, the beams were erected.

Construction of the new expansion began in August of last year and was finished in May of this year. Kreinheder said the restaurant opened in May, but the process of finishing up little odds-and-ends went on all summer.

The exterior of the building is a classic Victorian clapboard-style that fits in with the village of Ellicottville’s look, but the interior is timber frame-style.

In the dining area, Kreinheder pointed out the unique timber frame decor with barn boards wrapped in embossed leather on the walls. A barn board ceiling features subtle, red paint among the distressed wood. If guests look closely, they will notice mirrors peeking through the gaps and knotholes in the boards.

Upstairs is a large space for private functions such as receptions and conferences. The wood plank walls are made from harvested larch and pine trees killed by an infestation of the mountain pine beetle out west.

The beer garden recently opened its outdoor patio bar. Kreinheder said, next summer, the beer garden will be expanded all the way back to the creek with a stone wall surrounding it. It will also feature a stone fireplace.

“Everyone did a great job this summer,” he said. “The funny part about it is, I had no idea that we were going to raise our employment level so much. We’re at 89 employees right now and most of them work over 35 hours a week. We were previously at 47 employees, but between the events that are currently being booked and planned, we needed the extra people.”

He continued saying they just hired a brewing operations manager, who came from a brewery in Pittsburgh. He’ll be operating and managing all the logistics in the brewhouse.

Kreinheder continued the tour moving to the actual brewery mezzanine and mill room where he explained how EBC creates its hand-crafted beer.

He explained the brewing process of brewing beer, which goes through a number of cycles. First the grain is milled and a mash is made that is combined with hot water and boiled for 90 minutes. The mixture is then cooled, fermented, filtered, conditioned and finally dispensed.

According to Kreinheder, the new brewhouse can produce 60 barrels of beer, in one day, and each barrel holds 31 gallons. Before the expansion, it would have taken 10 days to produce that amount.

“Next year, our brewhouse should be at 3,000 barrels, so we’ll probably grow into a capacity of maybe 8,000 barrels each year. June, July and August of this year was our busiest time ever,” Kreinheder said.

In a previous interview with The Salamanca Press, Kreinheder said the brewery’s old system was kind of antiquated, so they put in a new brewery that was manufactured in Germany. He said, for its size, it’s the most sophisticated brewhouse in North America.

The new brewery is a fully automated system, which allows for fine-tuning. Now they can start the system up in the morning, from a cell phone if they wish, and the first cycle with the mash will be done by 10 a.m.

According to Kreinheder, one by-product of the brewing process is spent grain, which is used by local pig farmers. Another by-product is pure protein, which is the base of all cosmetic products. He added that larger brewing companies sell the protein, but EBC doesn’t accumulate enough to bother selling it, so it is sent down the drain to be treated.

“Water is expensive, so we’ve been trying to be more efficient on our water usage,” he said. “We also built a sewage reservoir system in the basement, so we can recall and treat our high-content sugar water before it leaves the plant.”

According to information on the brewery’s website, EBC was established in Ellicottville, in 1995, after the inspiration was born during a ski trip to Vail, Colo. EBC is considered one of the finest American craft brewers and has won multiple International Brewing Awards.

Visitors may explore behind-the-scenes and learn about the process of brewing hand-crafted beers. Brewery tours are currently held on Fridays at 2 p.m. and 4 p.m.; and Saturdays and Sundays at noon, 2 p.m. and 4 p.m.

Ohio school is staying open with these safety measures