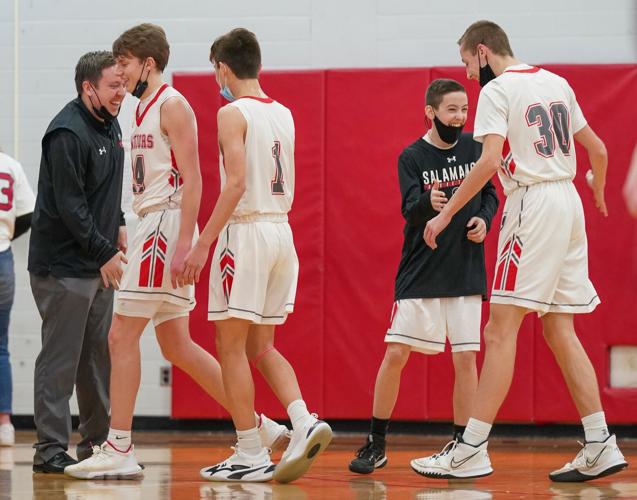 Salamanca players celebrate coming off the court during a timeout in the second quarter of a Section 6 Class C quarterfinal win over Portville on Saturday. 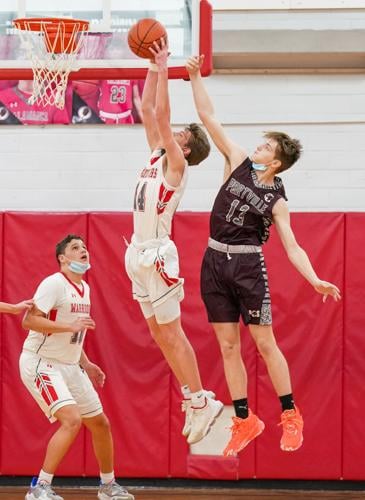 Salamanca's Cole Hedlund (14) jumps for a rebound against Portville in a Section 6 Class C quarterfinal. 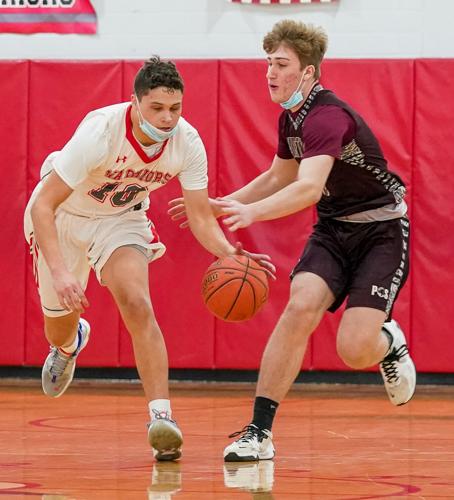 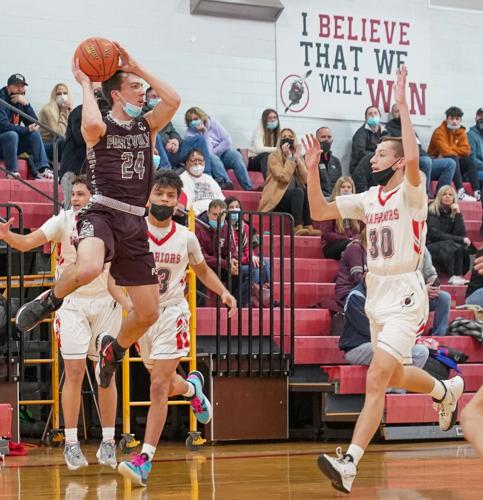 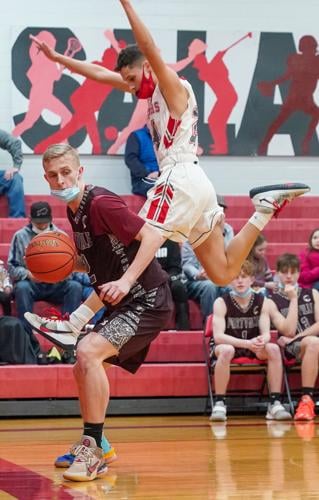 Salamanca players celebrate coming off the court during a timeout in the second quarter of a Section 6 Class C quarterfinal win over Portville on Saturday.

Salamanca's Cole Hedlund (14) jumps for a rebound against Portville in a Section 6 Class C quarterfinal.

SALAMANCA — The Salamanca boys basketball team opened its campaign for a Section 6 Class C championship by flashing its depth of scoring options on Saturday.

The Warriors had five different players score 10 or more points in an 86-29 triumph over Portville in a Class C quarterfinal. While running the show, senior point guard Hayden Hoag also had a career-best scoring afternoon with 19 points. Hoag impressively filled out the stat sheet with eight rebounds, eight assists and eight steals.

“He's so critical for us, and we said it all year,” Salamanca coach Adam Bennett said of Hoag. “We go as Hayden goes, and it's nice to see him get a career high tonight on the last game that he'll play on his home floor. He deserves it. He's worked really hard, and he has the ability to score the ball, but he values all of the little things that make us a good team. He's one of the top assist leaders in Western New York, he's a great defender, he's a good rebounder, so it's nice for him to get the recognition because he deserves it. All he cares about is helping his teammates succeed and doing his best to help us win. He's done that all year and he certainly did that today.”

“We try to Identify ourselves as a team that shares the ball,” Bennett said of the balanced offense, "not only to have all five starters finish in double figures, they averaged about 15-16 minutes apiece, but the other guys that came in played really well. We feel like our tough schedule and the league that we played in has built us some solid depth and it has really toughened us up as the season's gone on. When our quote-unquote bench comes into the game, there's not a letdown, they still play hard and they take a lot of pride in the way that they play too. So especially in the playoffs in a quarterfinal game, to get everybody in and everybody involved is fun as a coach.”

The Warriors face a quick turnaround for a Monday night semifinal against a longtime rival, top-seeded Randolph (20-1). Salamanca handed Randolph its only loss in the regular season but the Cardinals took the rematch to even the season series.

“Salamanca was much more physical than us,” Portville coach Josh Brooks noted. “They were up early and continued to pour it on. A credit to Adam Bennett and his program.”

Salamanca led 21-3 after the first quarter en route to an even stronger win than the 76-49 victory the Warriors claimed over the Panthers at the Joe DeCerbo Memorial Tournament in December.

After a slew of absences over in the last month due to injuries, illness and an off-court issue, Salamanca got back to full strength in the last week of the regular season. Even short one starter again on Saturday, Salamanca looked like the team that started the season 8-1, or perhaps even better.

“Portville is a good team, they're the No. 5 seed, they had a nice season. I just thought we played really hard from start to finish,” Bennett said. “I’m happy with where our defense is, but it's one of those games, everybody played, everybody got in the scorebook. We were actually missing R.J. McLarney, who has a non-COVID illness. He wasn't here but everybody who was here played and scored and we're really just trying to make sure that we're playing our best heading into Monday at JCC. We know that we certainly have to play well there and we're excited for the opportunity.”

The Warriors know the caliber of opponent they will face on Monday very well, but Bennett stressed to his team to focus on playing its best.

“We have to take care of our own business and play hard for 32 minutes,” Bennett said. “Nobody knows how good they are more than us, but we also feel like we're a very good basketball team and our hope is that our schedule and our league has prepared us for moments like this, so my challenge to our guys heading into Monday's game is just to take care of the business we need to take care of. It's not as much about Randolph and who they are, it's about us playing our best basketball and we feel like against any team if we play our best we're going to have a chance.”