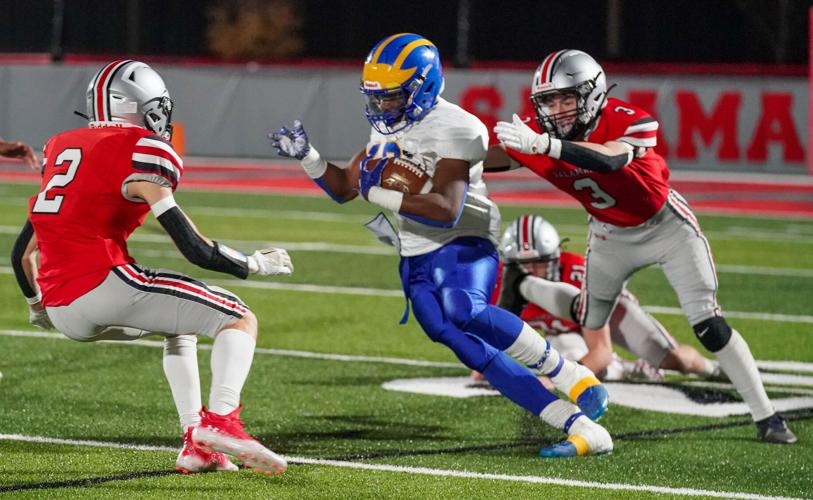 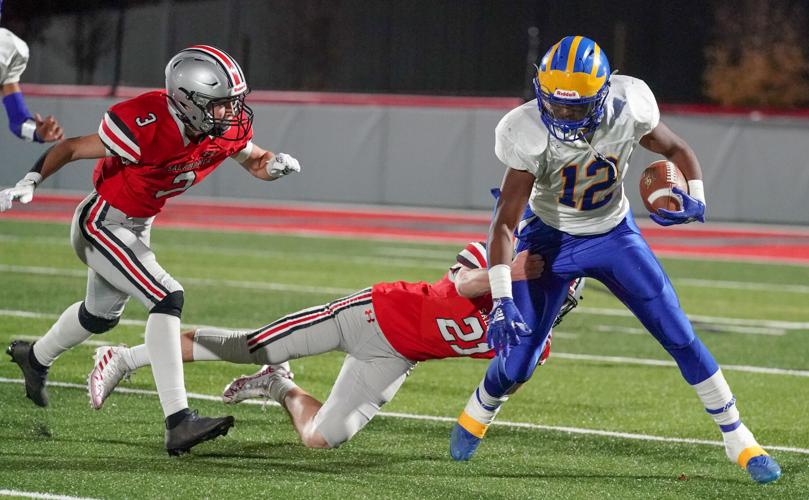 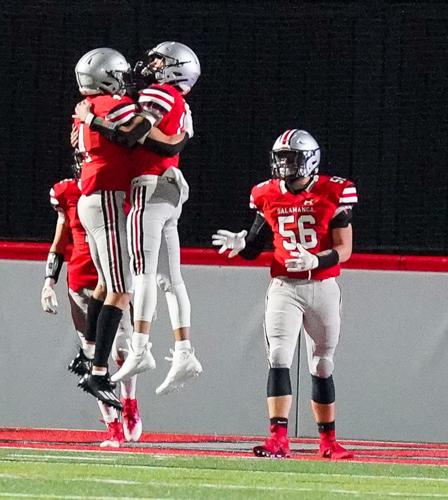 A pair of Salamanca players jump in celebration following a touchdown in the first quarter against Cleveland Hill in a Class C quarterfinal game on Friday night in Salamanca. 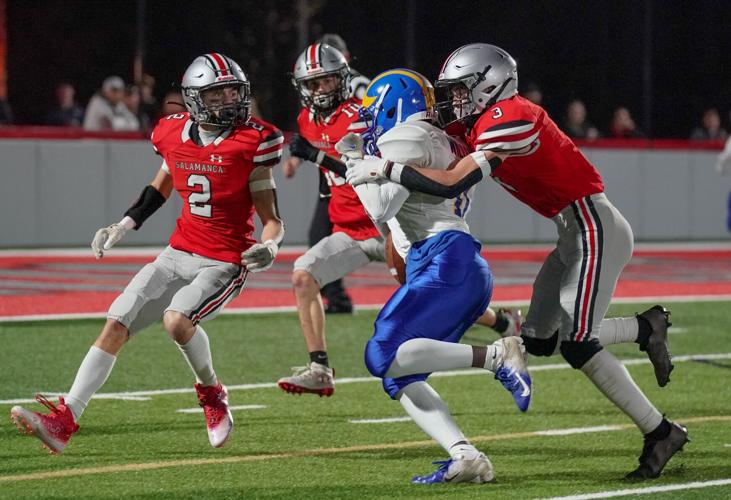 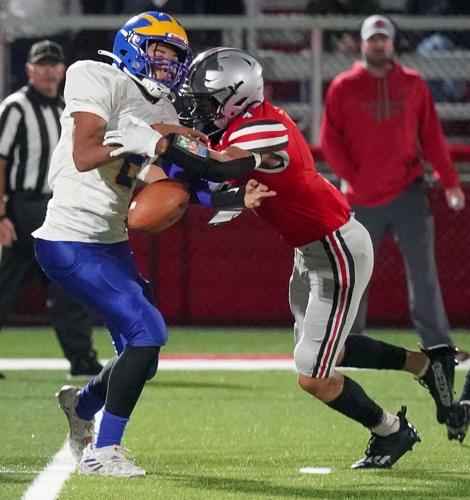 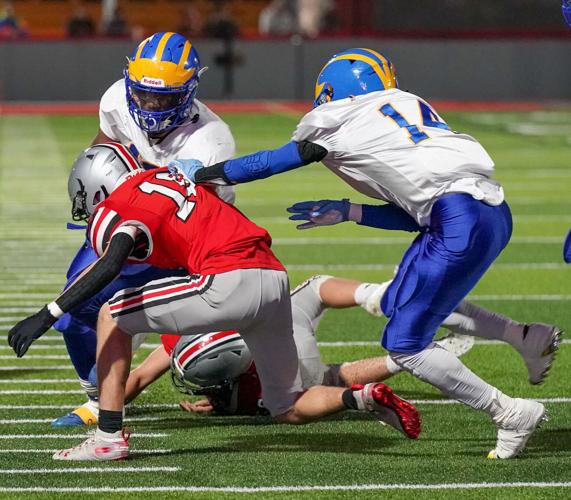 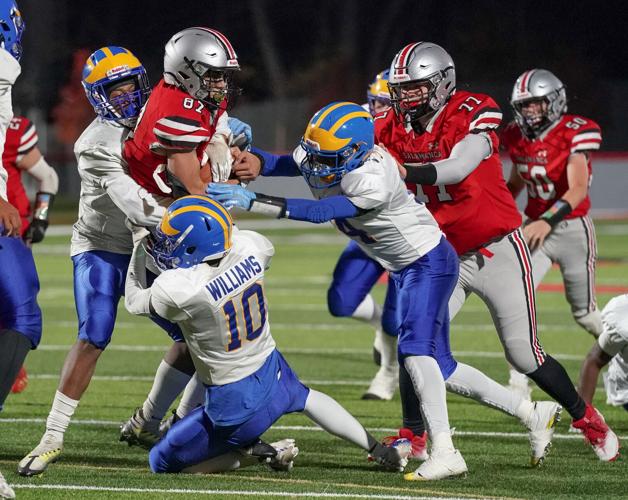 Salamanca’s Tayoni Galante (87) refuses to go down despite having three Cleveland Hill players around him in a Section 6 Class C quarterfinal football game on Friday night in Salamanca.

A pair of Salamanca players jump in celebration following a touchdown in the first quarter against Cleveland Hill in a Class C quarterfinal game on Friday night in Salamanca.

Salamanca’s Tayoni Galante (87) refuses to go down despite having three Cleveland Hill players around him in a Section 6 Class C quarterfinal football game on Friday night in Salamanca.

SALAMANCA — The Salamanca football team hoped to build a speedy offense with a variety of dangerous weapons: it appeared to pay off Friday night.

Just take Salamanca’s first two touchdowns in Friday’s Section 6 Class C quarterfinal, both 80-yard bursts of speed from two of the Warriors’ playmakers. Quarterback Maddox Isaac ripped an 83-yard touchdown run after faking a handoff in the first quarter against Cleveland Hill at Veterans Memorial Park for a 7-0 lead. After Cleveland Hill drew within a point, 7-6, the Warriors immediately responded with an 81-yard kick return touchdown by Jason McGraw.

Salamanca scored six straight times, with five touchdowns and a safety, in the second and third quarters to run away with a 51-20 victory over the Golden Eagles, advancing to the sectional semifinals.

Seeded third as the Class C South champion, Salamanca (7-2) did it all without workhorse running back/linebacker Jesse Stahlman, sidelined after an injury in the regular season finale.

Isaac led the Warriors’ 291-yard rushing effort with a team-high 114 yards on six carries and went 2-for-5 passing for 67 yards, including a 52-yard touchdown to J.T. Auman. Auman handled lead tailback duties with 16 carries for 87 yards and a rushing score.

“It was a little shaky coming in,” SHS coach Chad Bartoszek said. “I really haven’t game-planned very often without Jesse on our team. I said something to one of our coaches, ‘man, this is the first time ’ he started as a freshman, we haven’t had a game without him. So it was hard for me to change mentalities a little bit, but it was also fun to try to explore some new options and get some people in some different spots. We’re hopeful that he can get healthy and get back, but right now our guys have just got to step up and they did tonight.”

MUCH LIKE their Week 2 trip to play Cleveland Hill, the Warriors needed at least a quarter to adjust and start to pull away.

“It’s just a testament to Coach (Glen) Graham, Cleve Hill, both times we played them, we’ve struggled through the first quarter and a half,” Bartoszek said. “They come ready, and on our end we gave them a couple short fields, which we hate, it’s just not our style. Short fields are tough to stop anybody. So we’ve got enough weapon-wise, speed-wise, talent-wise to make plays and we made it on all phases today; special teams were huge, our defense was flying and then of course we hit a couple big plays offensively. But football in the playoffs, it’s not going to be smooth sailing.”

“Today there was a little bit more diversity in what they were doing offensively,” Graham said, compared to a 34-8 Salamanca win in Week 2. “I think part of that is because they’re missing 47 (Stahlman), so they had to do some different things. They run what they run very well. It’s very familiar and those kids run it to an outstanding degree and when they’re executing the way they executed tonight, they’re hard to beat.”

FOR No. 6 Cleveland Hill (5-4), Larry Burgin ran 20 times for 151 yards, the biggest chunk of which came on a 52-yard fourth-quarter touchdown run. Isaiah Williams made three catches for 76 yards.

Tayoni Galante made a team-high seven tackles (2.5 for loss), while Jaxon Tarr (3.5 TFL) and Quinton Jones (1.5 TFL) had five tackles and one sack each. Tucker made four tackles, 1.5 for loss.

“We just allowed too many big plays: big returns, long runs. It’s hard to win a game, especially on the road like that,” Graham said. “That was a little disappointing on our part but we didn’t give up and we kept playing through the fourth quarter and we’re a very young team in a lot of aspects, so that was good to see. But they’ve got a heck of a team this year.”

“We’ve got a little bit of redemption either way,” Bartoszek said. “It’s one game away from a sectional championship. Boy, it’s fun to be a part of and I’m really proud of our coaching staff. I’m hoping this is still just a step.”