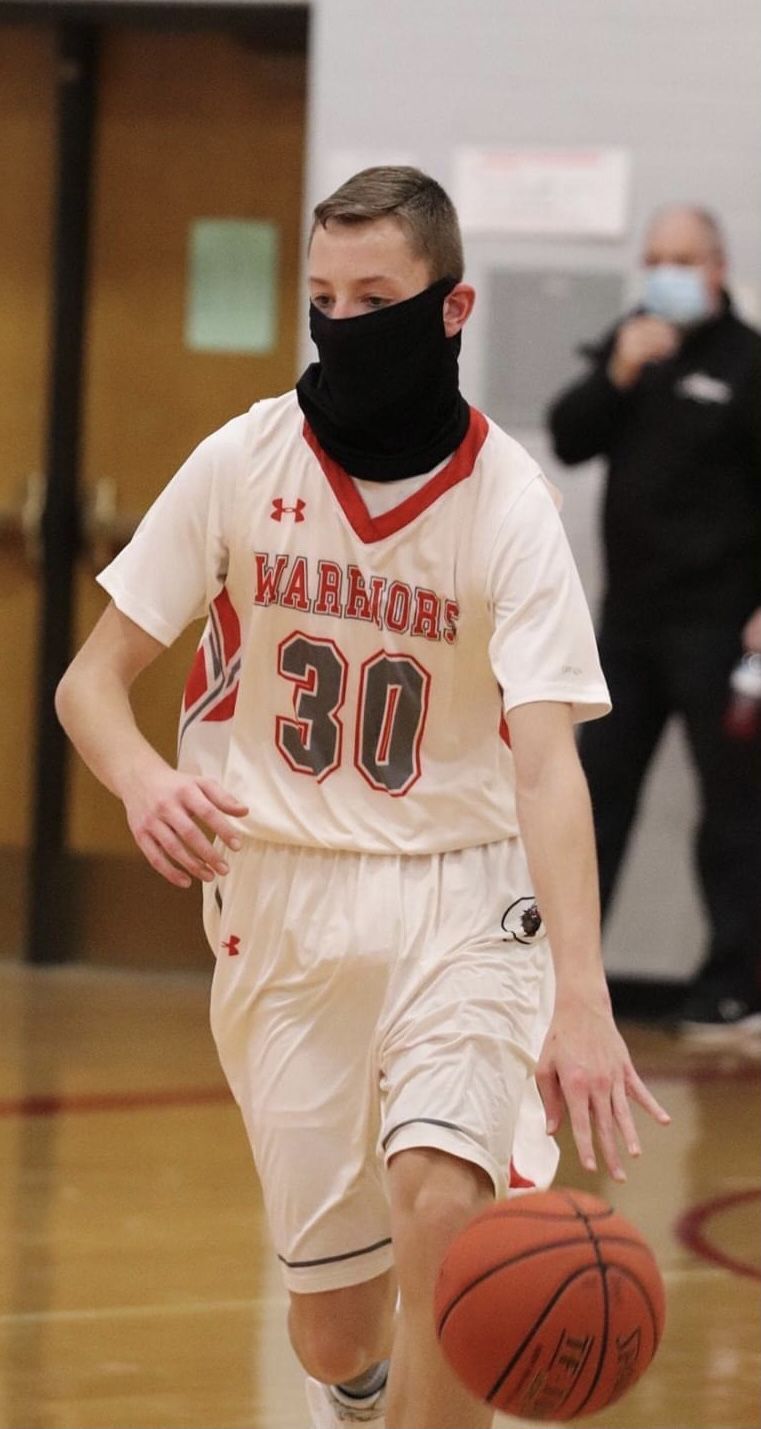 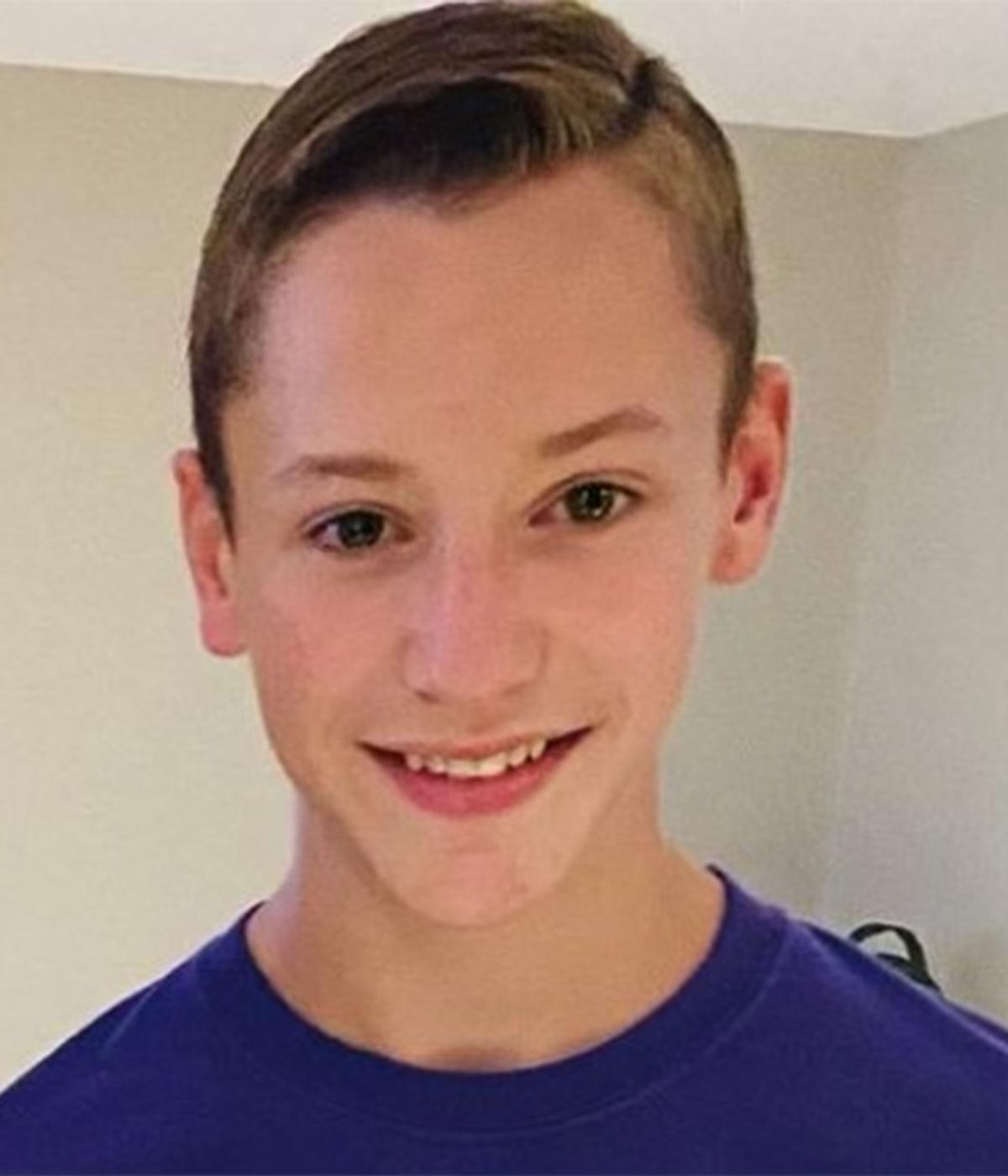 Nothing in Andy Herrick’s life has stopped him from playing the sport he loves. A pandemic season was no different.

Herrick, a sophomore at Salamanca High School, has lived his entire life — he recently turned 16 this month — with cystic fibrosis. The life-threatening genetic disease, which primarily affects the lungs, has no known cure.

Herrick first picked up a basketball at age 5 and it’s now his favorite sport. He just finished his first varsity season for the Warriors, starting at guard.

For his commitment to the game despite his condition, and his overall positive demeanor and sportsmanship, Herrick received nominations from two opposing coaches for the Times Herald’s Randy Stebbins Memorial Award, an annual honor given to an individual or team who showed perseverance that season.

“Playing all season with his condition during the COVID pandemic needs to be recognized,” one coach noted. “To top it off he’s a great kid as well.”

Herrick has the overwhelming support of his coaches and teammates.

“Quite simply,” Salamanca coach Adam Bennett said, “Andy is the best kid that I’ve ever met, and that’s not hyperbole, that’s truth. He’s responsible, he cares about others, he suffers from CF but he’s never once let it define him. If anybody had an excuse to be self-centered or worry about themselves, it’s him, and he just doesn’t do that. He lives for others, he genuinely cares about other people and making other people happy and that’s from his teammates to his fellow students to his coaching staff, really anyone that he encounters.”

“Andy’s an extremely hard worker,” added senior Lucas McKenna. “He always comes in with a good attitude and he always just wants to get better and wants to make his teammates better. He’s always in a good mood.”

The Herricks are well-known to the local athletic community, particularly at St. Bonaventure, which supports the Great Strides Walk in Salamanca each fall. Since 2007, Andy’s family has organized the walk to raise money for the Cystic Fibrosis Foundation. The Salamanca boys basketball program also started an annual Beat Cystic Fibrosis Night game in 2018 aimed to raise money for the foundation.

As with all teams playing sports during the COVID-19 pandemic, the Warriors didn’t want to lose any games due to a positive test and the “pause” that comes with it. But in particular, they wanted to keep Herrick safe this year.

“We put a really heavy emphasis on staying safe,” McKenna said, “because we all wanted to have a season this year with no pauses and we also wanted to keep Andy safe. So we really worked together as a team to just stay safe.”

“We were just being protective,” added senior Jarrett Pond, “hand sanitizer all the time, trying to have our mask up as much as possible and during the season, everyone just went to practice and went back home and tried to not get in contact with anybody.”

Trusting his teammates, Herrick said he didn’t worry too much about the risk of playing.

“Not really,” he said. “I know that everybody’s really doing their best to make sure that we don’t get put in a dangerous position, especially my teammates and our team. I’m around them more than anybody else and everybody’s been super diligent about that so I didn’t really feel worried at all.

“We definitely held each other accountable. It was a standard from Day 1 that nobody was going to be doing anything like that to put anybody else at risk and everybody followed through with it.”

Bennett said he didn’t have to stress the importance of following COVID protocols: his players knew already how important that would be.

“Our first open gym workout, there was a period last fall where we were able to meet, everybody was masked up and distanced and we started to have a conversation about COVID and our captains stepped up and took a leadership role and said we have an extra responsibility here to protect one of our own,” Bennett said. “That came from them. So then we created the guidelines that our team was going to follow that I’m sure aren’t different than a lot of teams in the area. But we wore masks every practice even when we were just with each other.

“Obviously we wore masks during games. We over-sanitized and over-cleaned and the biggest thing was the players made personal sacrifices. I mean, these are high school kids, so in the middle of a pandemic it’s hard enough to ask high school kids to change their lives but these guys willingly did it and they made sure that they were doing the right things away from school and away from the court so they didn’t potentially bring anything into our team. I just couldn’t be more proud of them for that.”

Herrick said he hopes to make a league all-star team next season. But his biggest goal is seeing the Warriors, who went 7-8 playing a tough schedule in the CCAA West I division, win a sectional title in his career.

In order to lead a healthy life, Herrick undergoes breathing treatment and takes medicine every day. But he doesn’t let cystic fibrosis impact his play or availability on the court.

“Luckily I am a healthier patient and I make sure that I do all my treatments and take all my pills and medicines to stay on top of that,” he said. “I don’t struggle as much as some other people with cystic fibrosis would, but I do feel pretty sore like in my lungs after a good practice. But as far as being able to play, I don’t think there’s any limitations because I do play a lot per game, I don’t have to come out because of anything cystic fibrosis-related.”

Basketball, or any sports, can help to keep his lungs as strong as possible.

“For somebody like Andy, athletics is a great way to keep him in shape,” Bennett said. “So (during the pandemic) he took it upon himself, his family would go on walks every day, he was always playing out in the yard, in his driveway with his dad, working to get better, doing everything that he can to keep his lungs in shape. Then the daily routine and the daily grind that he goes to in order to stay healthy, what he does is impressive.

“The best compliment I can give Andy, even though he has CF and he suffers from CF, he’s not on our varsity team as a sophomore because he has CF and because it’s a great story. He’s on our varsity team because he has the talent and the drive and the wherewithal to do that and that speaks to him as a person. He leads as normal of a life as he can, and I think that’s what our kids and certainly me and our coaching staff respects most about him.”

Andy’s father, Greg, is an assistant coach for Bennett and has coached travel youth teams through the years. So Bennett said Andy has been around the team throughout his tenure as head coach. He keeps up with former Salamanca basketball players as well, ones who graduated before he ever made the varsity team.

“There are guys that have gone off to college and graduated high school that still just have so much love and respect for Andy and that’s the kind of impact that he makes on you,” Bennett said. “For me, I got into coaching because I had coaches that made a difference for me and I wanted the ability to do that with kids. What I’ve found out is Andy has made just as much a difference on me as hopefully I’m able to make on our teams. He’s a one-of-a-kind kid. You don’t generally meet kids so kind and caring and respectful and he’s the true definition of a Warrior. His teammates all love him, they all respect him and most importantly they’ve all got his back.”