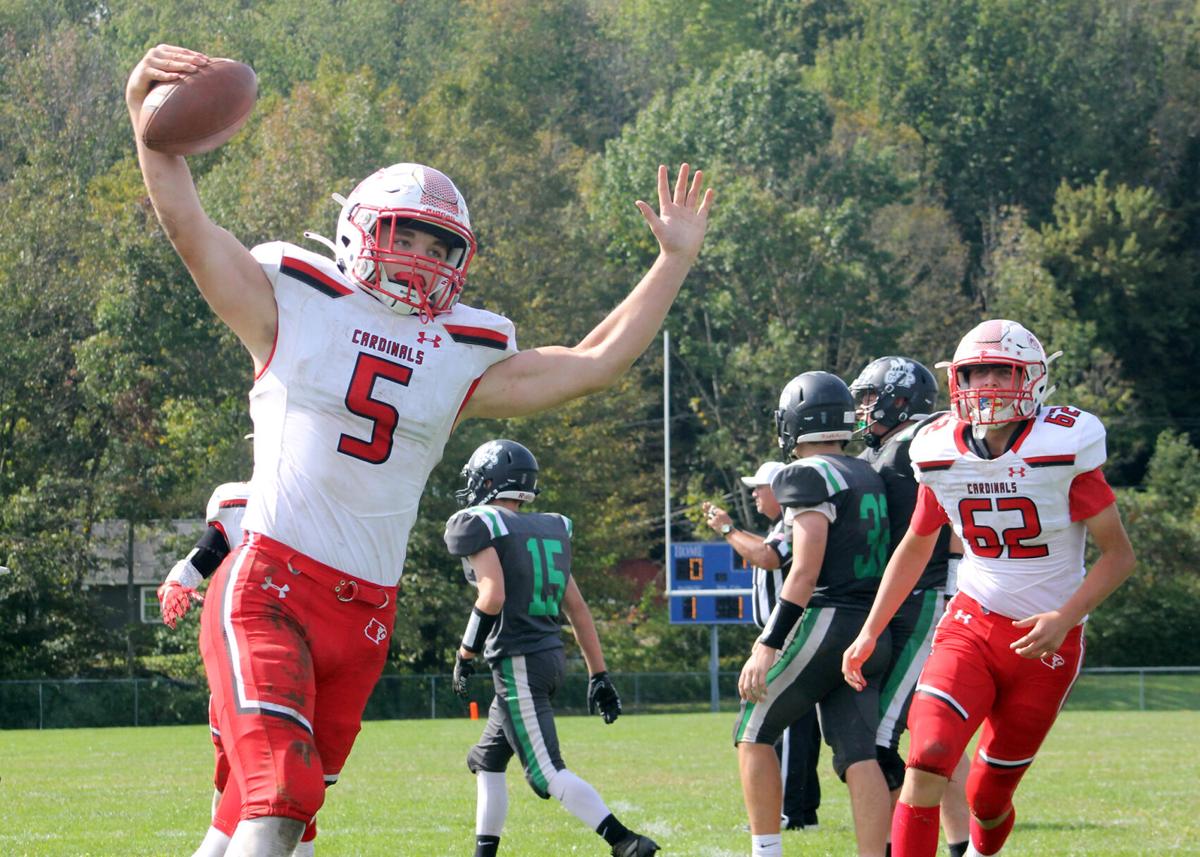 Randolph running back Luke Pagett (5) celebrates after scoring a touchdown in the third quarter of a Section 6 Class D football game against Clymer/Sherman/Panama on Saturday afternoon in Panama. 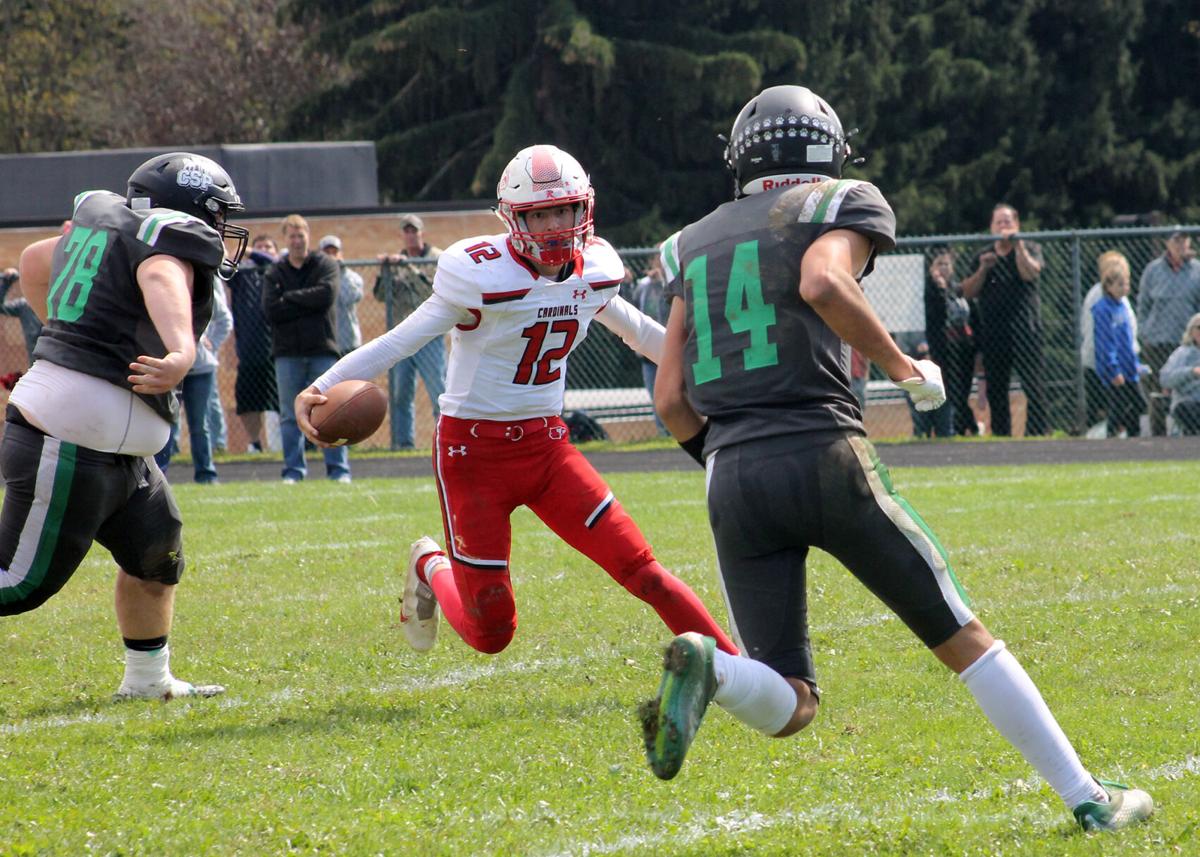 Randolph quarterback Carson Conley (12) looks for room to run as he scrambles out of the pocket against Clymer/Sherman/Panama during a Section 6 Class D football game Saturday afternoon in Panama. 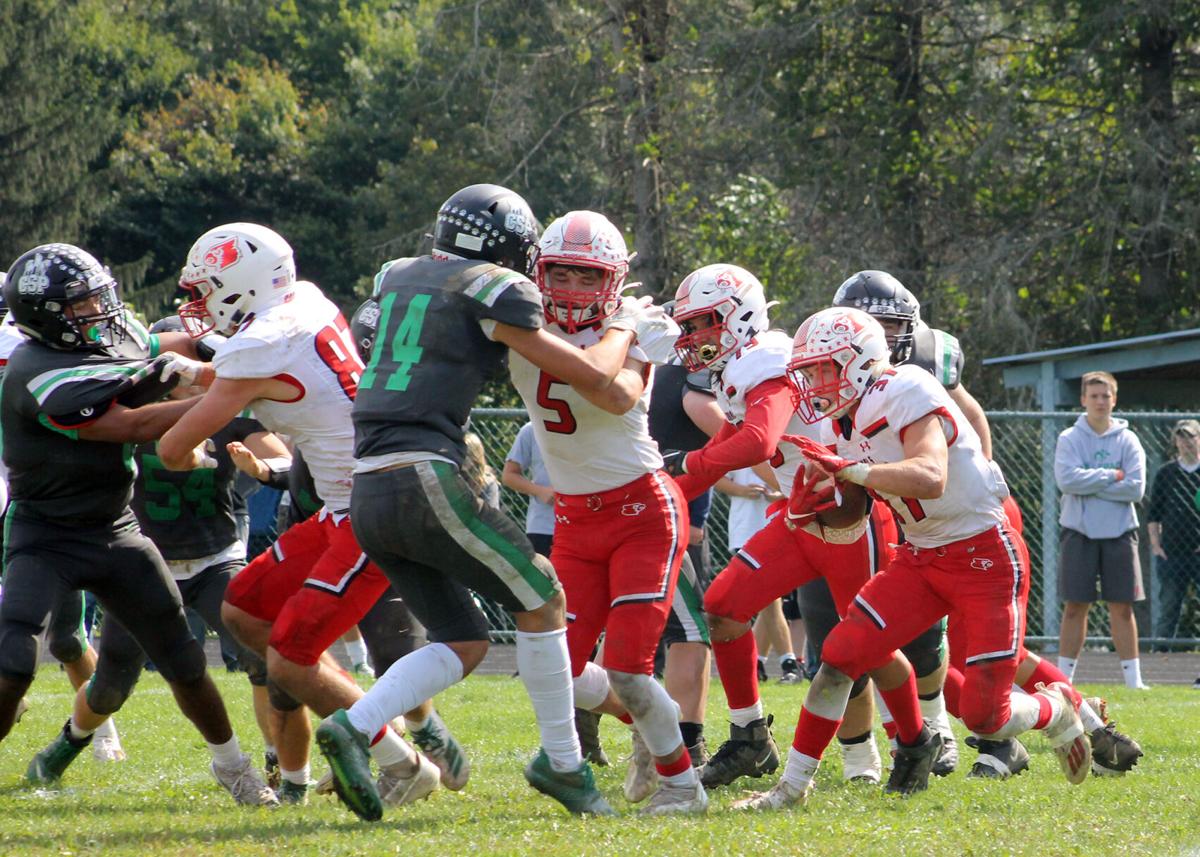 Randolph running back Xander Hind (37) looks for room to run out of the backfield against Clymer/Sherman/Panama during a Section 6 Class D football game Saturday afternoon in Panama. 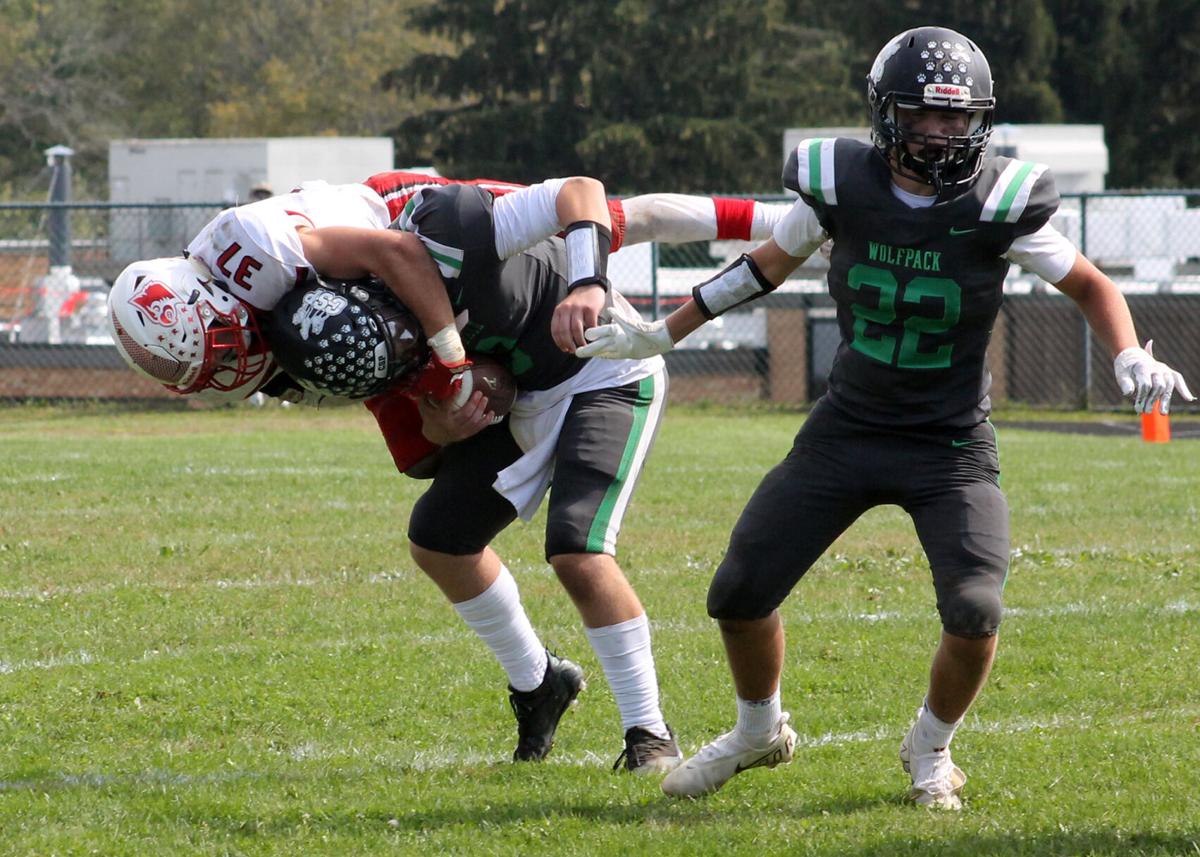 Randolph’s Xander Hind (37) hits Clymer/Sherman/Panama quarterback Kurtis Olson (3) from behind for a sack in the third quarter of a Section 6 Class D football game Saturday afternoon in Panama.

Randolph running back Luke Pagett (5) celebrates after scoring a touchdown in the third quarter of a Section 6 Class D football game against Clymer/Sherman/Panama on Saturday afternoon in Panama.

Randolph quarterback Carson Conley (12) looks for room to run as he scrambles out of the pocket against Clymer/Sherman/Panama during a Section 6 Class D football game Saturday afternoon in Panama.

Randolph running back Xander Hind (37) looks for room to run out of the backfield against Clymer/Sherman/Panama during a Section 6 Class D football game Saturday afternoon in Panama.

Randolph’s Xander Hind (37) hits Clymer/Sherman/Panama quarterback Kurtis Olson (3) from behind for a sack in the third quarter of a Section 6 Class D football game Saturday afternoon in Panama.

PANAMA — There’s a new, if familiar, frontrunner in the race for Section 6 Class D football supremacy.

Randolph took control of first place in the league by knocking off the top-ranked team in the state at that level, Clymer/Sherman/Panama, using hard-nosed rushing and stout defense to shut down the Wolfpack in a 22-0 road victory.

“We knew it would be a big one,” Randolph coach Brent Brown said. “It was good, (the) kids played hard for four quarters.”

Randolph (4-0) scored three rushing touchdowns (one each in the second, third and fourth quarters), all on 1-yard plays, and each finishing off long, run-heavy drives.

“Hat's off to Randolph, they're a phenomenal football team,” CSP coach Ty Harper said. “We knew coming in that they're big and physical and they run the ball well. That's Randolph football. That's been Randolph's M.O. for three decades, you know? We knew that they were going to run dive-option, I thought they did a really nice job running (isolation) at us today and we just weren't tough enough in the trenches. But that's a tribute to them. I thought our kids played really hard, but we obviously just have to get better.”

Xander Hind again led the Cardinals with 178 rushing yards and two touchdowns on 29 carries while Luke Pagett added 75 yards and a touchdown on 17 carries.

“These guys are tough because they'll put eight in the box and mix it around and sometimes it's a guessing game,” Brown said of CSP’s run defense. “But you've got to hand it to the line. For the most part, they picked up the blitz pretty good and we were able to move the ball down the field. We had a short field maybe once and we had a couple penalties on the one drive that kind of set us up too. But when you get into a game like that, sometimes that's the difference.”

Brown admitted before the game his team had some struggles in pass defense a week earlier in a 44-28 win against Depew. CSP (3-1) appeared intent on replicating that formula (attempting 40 passes to 24 rushes) with mixed results: quarterback Kurtis Olson was 19-for-37 passing for 172 yards with two interceptions. Cooper Brown was the leading receiver with eight catches for 63 yards.

Jaiden Huntington grabbed both picks and had a team-high 10 tackles, including a sack.

“That was the whole thing: don't give up that long pass and if they're going to throw underneath,” Brown said. “Come up, tackle and make them do it 10 times down the field to beat us and I think the kids did pretty good. We let a couple guys deep there that was actually blown coverage; it wasn't what we worked on, but I thought our pass defense obviously was good against a good team.”

Huntington’s second interception, in the end zone in the third quarter, stopped a potential tying CSP drive. Instead Randolph drove 88 yards, aided by a pair of personal foul penalties, to its second touchdown late in the third.

Huntington caught Randolph’s lone completed pass on that drive, a crucial 22-yard grab up the middle on second-and-long. Brown said the tight end’s run blocking played an even bigger part in the Cardinals’ success.

“He's our tight end in that pro set, we run behind him a lot,” Brown said. “He's good; he's big, he's strong, there's not a kid on this earth that loves the game any more than he does. Even in practice every day, he can't wait to get here. He's a great kid to have.”

Both coaches knew this Week 4 game, while crucial to the standings now, doesn’t guarantee anything for either team yet.

Harper recalled a loss to Franklinville/Ellicottville in 2019 that cost his team the top seed, but was later avenged in the sectional title game.

“It's a long season and I think sometimes a loss is a really good opportunity to learn,” he said. “It's definitely not the end of the world for us and hopefully we can regroup.”

“To be honest with you, I don't think anybody's figured out the Randolph puzzle yet,” Harper said. “So that'll be a challenge but that's part of the fun of coaching is trying to figure out if and when we see them again, how can we do better and how can we fix some of the things that we did wrong today? but we'll have to go back and look at the film and see what we can do to improve. But I think our kids are up for it too. We've got a great group of kids and I don't think this loss will end up defining their season.”

Brown noted that CSP brought back fewer starters than his Cardinals did to start the season, expecting to see a different team down the road if they meet in the playoffs. But for now, the Cardinals have a track toward the top seed in sectionals.

“We've still got three league games to go and a non-league game. We've got Portville next week, we'll take it week by week of course. The biggest thing is staying healthy and not getting COVID. That's the scariest thing right now.”

SINCLAIRVILLE — Salamanca (3-0) did not get a chance to move to 4-0 this week after an announced postponement on Friday afternoon.

An announcement from the Salamanca athletic department stated the postponement was “due to factors not involving our team.” A makeup date is to be determined.

After the unexpected weekend off, Salamanca plays Fredonia Thursday night at Veterans Memorial Park. Spectators are encouraged to wear orange in support of the Every Child Matters awareness campaign.

TONAWANDA — Lucas Marsh threw for three touchdowns, including two to Logan Grinols, as Franklinville/Ellicottville rolled to 3-1.

Marsh was 9-for-15 passing for 100 yards, three scores and an interception. Grinols caught five passes for 61 yards including the first two touchdowns of the game.

Ethan Frank recorded a sack for the Titans.

SILVER CREEK — A third-quarter touchdown and two-point conversion pushed Cattaraugus-Little Valley ahead 8-7, but the Timberwolves could not keep up in a high-scoring second half on Friday.

For CLV, quarterback Josh Halterman threw for 142 yards and two touchdowns with one interception on 10-for-16 passing. Christian Hines had a 55-yard TD catch, while John Visnesky caught three passes, including a touchdown, for 54 yards.

Gage Furl was CLV’s leading rusher with 18 carries for 70 yards.

Paul Tackentien made a team-high 15 tackles (one tackle for loss). Furl added 6.5 tackles and grabbed an interception and Halterman also picked off a SC/F pass.