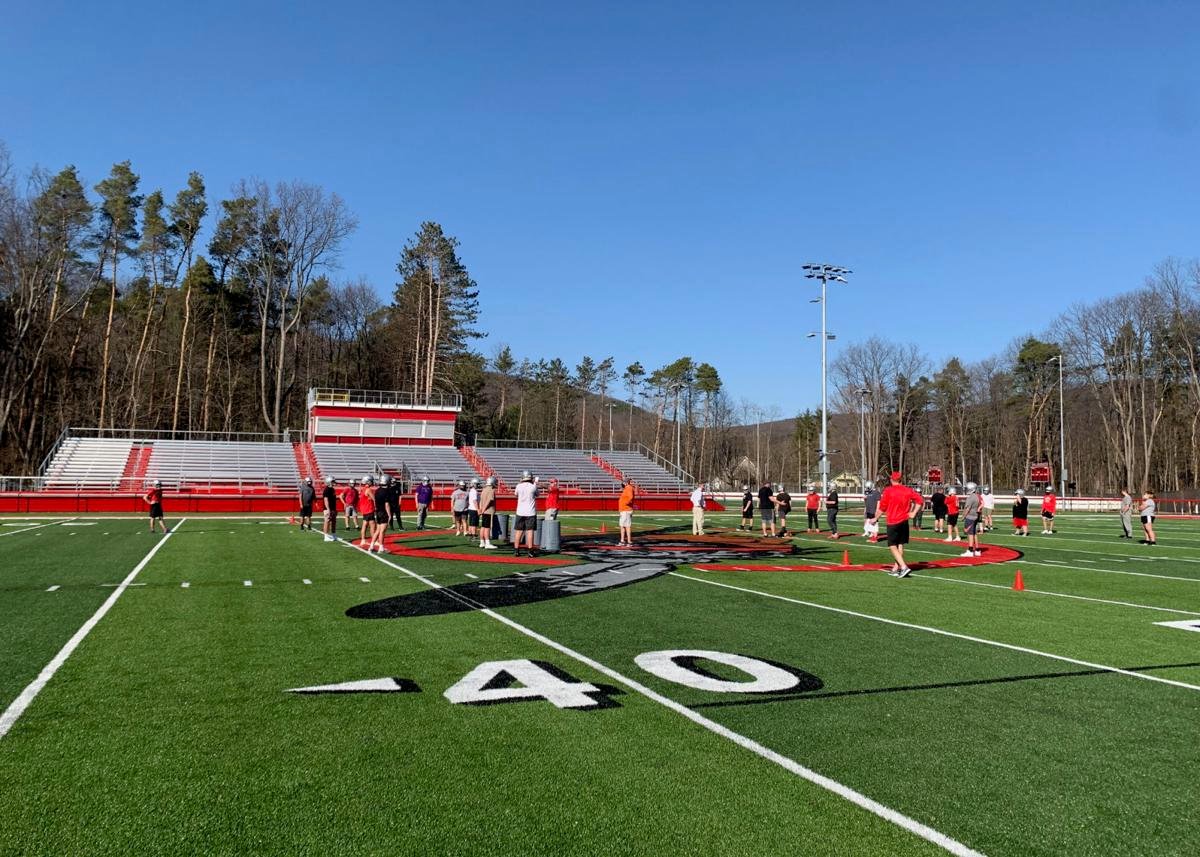 Salamanca coaches and players stand on the new turf field at Veterans Memorial Park for the first practice of football season on Monday. 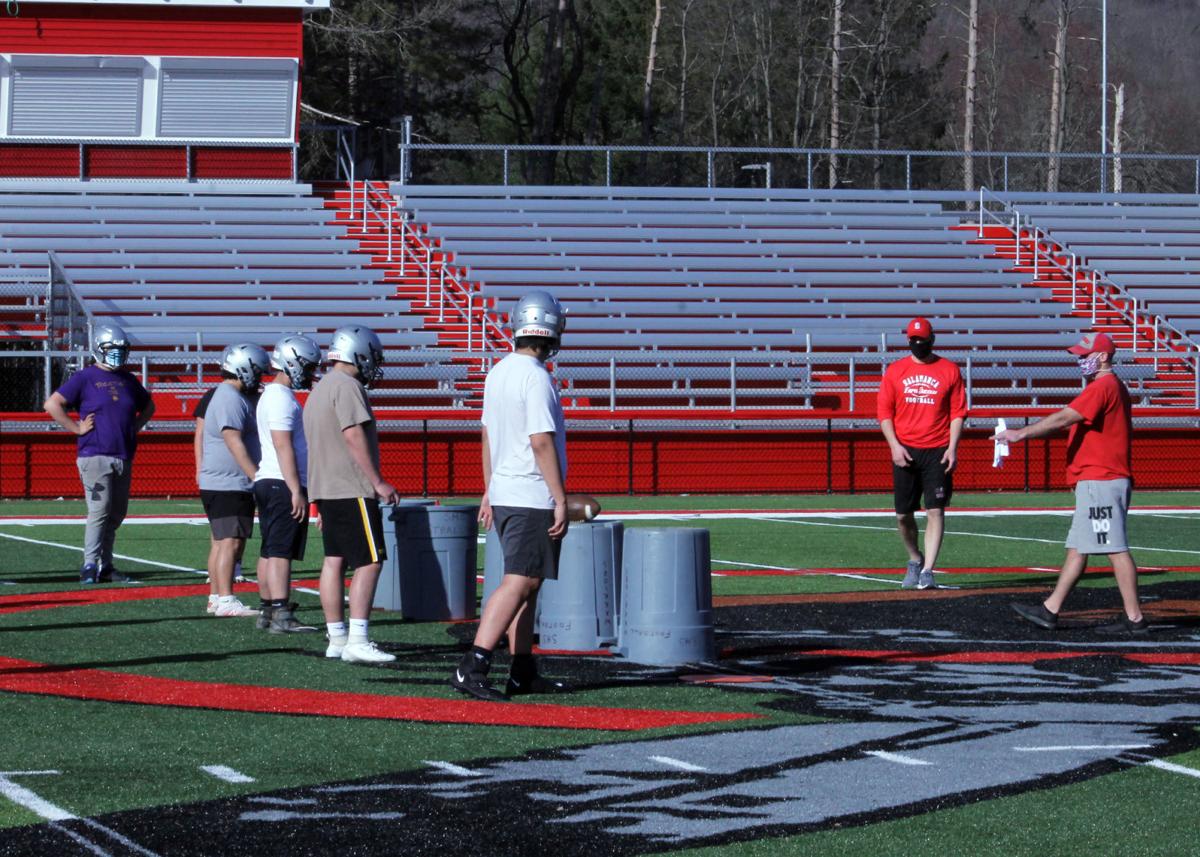 Coaches give instruction before a drill during Salamanca's opening football practice Monday at the new Veterans Memorial Park field in Salamanca. 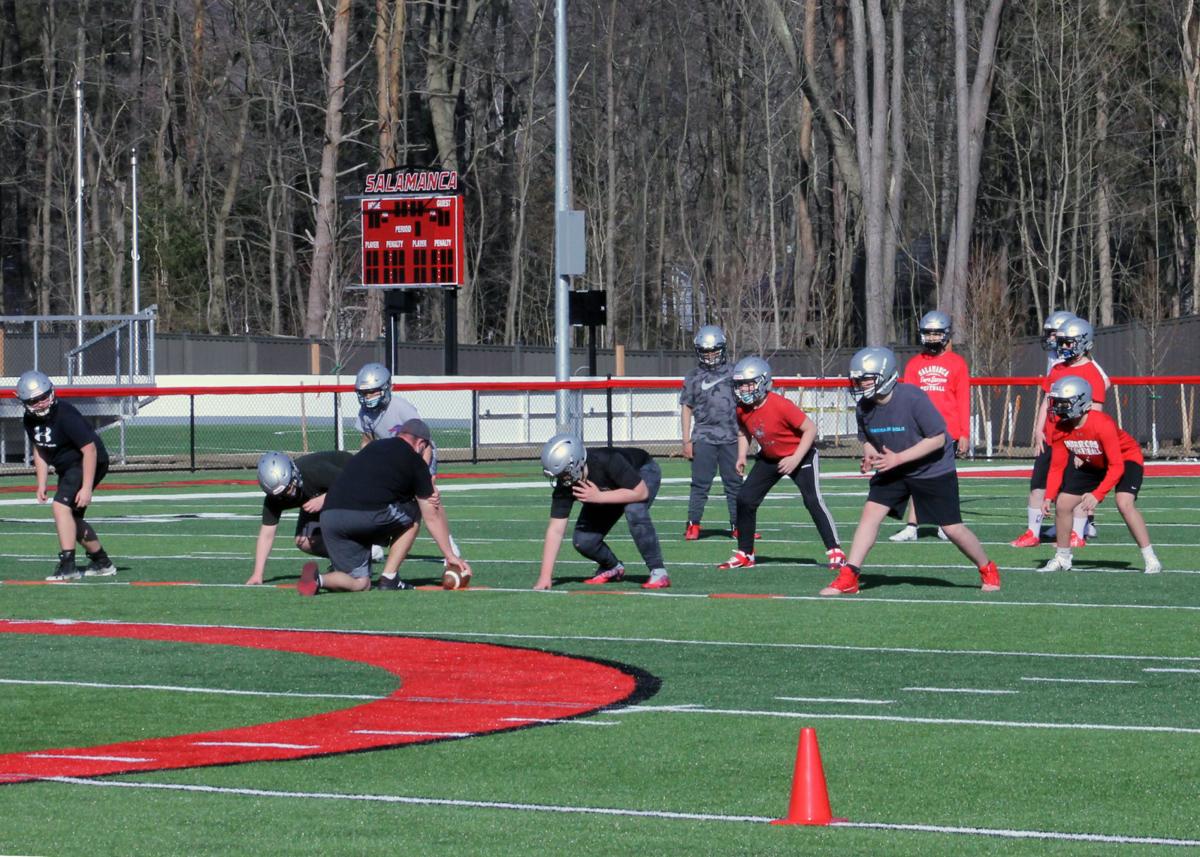 Players line up for a defensive line drill during Salamanca's opening football practice Monday at the new Veterans Memorial Park field in Salamanca.

Salamanca coaches and players stand on the new turf field at Veterans Memorial Park for the first practice of football season on Monday.

Coaches give instruction before a drill during Salamanca's opening football practice Monday at the new Veterans Memorial Park field in Salamanca.

Players line up for a defensive line drill during Salamanca's opening football practice Monday at the new Veterans Memorial Park field in Salamanca.

On a day that felt a little like football weather, high school teams in Western New York officially began their seasons Monday afternoon.

“If you didn’t look at the calendar, especially with the weather, you’d think it was August,” Olean coach Phil Vecchio said.

Many teams, Vecchio’s included, have held optional workouts in recent weeks to prepare for the first of its kind spring football season, having been delayed by the state due to COVID-19. The first Section 6 games are set for next weekend, giving teams a two-week ramp-up.

“We’ve obviously got a long way to go in a short time, guys’ conditioning is probably not where it needs to be, so we spent a little time doing that,” Vecchio said. “But we’ve been getting together for the better part of four weeks now and trying to install both offense and defense. The guys that have been there are getting it quick and the guys that are newer are learning.”

The Section 6 basketball season will end by this weekend, and many boys teams in the area remain in sectional contention. Vecchio said he won’t worry about getting his players on the basketball team in football practice until the Huskies finish their hoops playoff run.

“We should be able to have those guys eligible for the first game,” he said. “I think there’s just three of them, but they’re going to be three pretty good players this season.”

Olean kicks off the season Saturday, April 3, against Maritime Charter.

“I certainly don’t know how in depth we’re going to be able to get between now and then,” Vecchio said. “It’s going to be a pretty difficult first test for us, we’ve got the sectional champs coming in. We’re looking forward to getting ready to compete and go against another team. I’m just super happy for the seniors that they get a chance to play.”

Over in Salamanca, the Warriors broke in their new turf, taking the field at the impressive new multi-sport Veterans Memorial Park facility. Salamanca will hold its home games this spring at the new field.

Coaches often fit the stereotype of control freaks, wanting to make sure everything works out as intended. But on this day in particular, Salamanca coach Chad Bartoszek said he wanted to take time to enjoy the team being together and not stress about the smaller details.

“The word surreal comes to mind,” Bartoszek said of the first practice. “I just didn’t know what to expect at all today. Typically you’re nervous as a head coach, you want everything to go smoothly, but I just wanted to enjoy the moment. Really it all comes from the kids being on the field. Our numbers are pretty healthy. We were excited, the kids were having fun, everything just fell into place as the practice went on. I think everybody was a little uneasy early on, trying to figure it out, we haven’t really been together in so long, but once we got rolling it just kind of fell into place. Then you add in the feel of the stadium, it really was a special day today.”

Bartoszek said his team held about 14 optional workouts in the fall and a handful of limited workouts in late winter in the weight room or gymnasium. But on Saturday, the team met on the new field to prepare for Monday’s opening practice.

“It’s been a slow process, and I think that’s why today was a little uneasy,” he said. “Saturday was a good start, got some of the jitters out and you feel the excitement.

“We wanted a trial run, show how we’re still scanning, temperature checking, all that stuff, so we wanted to make sure all the kids knew how to do that, how we were going to warm up and just all the details that as a head coach you want to go smoothly so it doesn’t interrupt the practice flow. All our kids were prepared and ready today and we had real good numbers.”

Salamanca plays its first game in 10 days, kicking off a home and season opener Thursday, April 1, against Maple Grove. Bartoszek said the Warriors’ coaches need to prepare the team both physically and mentally before then. The physical prep started with preseason workouts.

“We’ve tried to get their bodies in certain positions that we don’t want to be tweaking anything, we don’t want soft tissue injuries and things like that, so the physical part of it, we did some of that today with some of the drills,” Bartoszek said. “The physical part will come, they’re used to that, they’re just a little bit more out of shape than maybe they’re used to, but the mental part is the biggest thing. We’re going to approach it as we don’t want robots out there, we don’t want them thinking too much, we’ve got to give them what we’ve got and let them play.

“This is not the time to over-coach, this is not the time to overthink it, especially Week 1, you’ve got 10 days, you’ve got to get your system in and you’ve got to get the repetitions in for your guys to that they are confident when they take the field because really they’re going to be nervous also, they’re the ones who have to play the games, so it’s our job as coaches to take a little bit of that pressure off of them and let them play.”

Husker Extra Podcast: The calm before the storm in football recruiting; NU will not host baseball regional

As rookies hit the field, Matt LaFleur says of Aaron Rodgers: 'We want him back in the worst way’