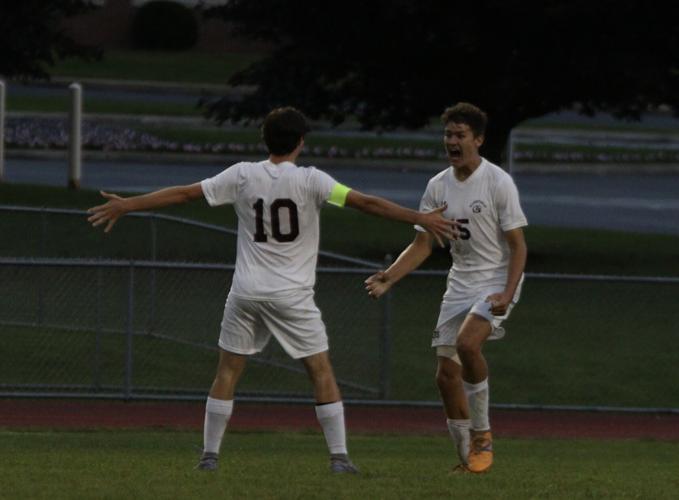 Ellicottville’s Maddox Johnson (15) screams for joy as teammate Sam Edwards (10) congratulates him on a goal during a boys soccer team on Monday. 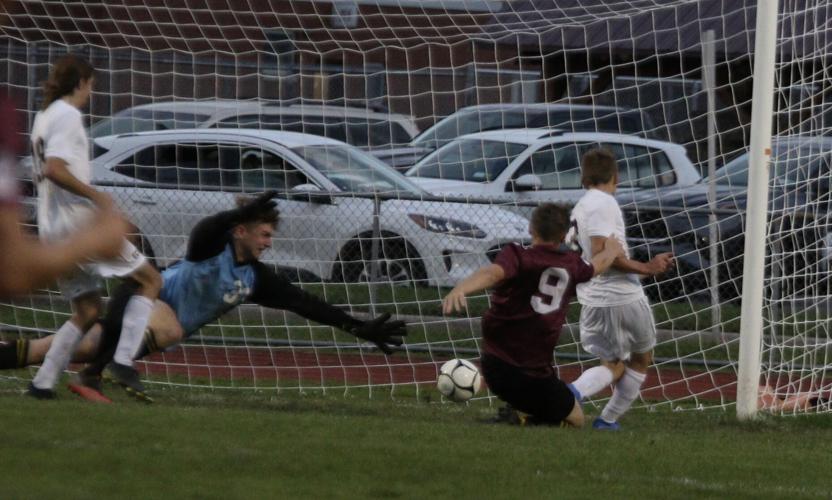 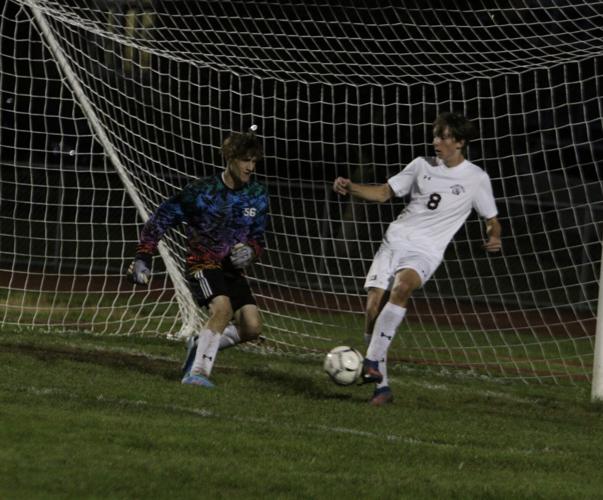 Ellicottville’s Ben Edwards (8) clears the ball off the goal line to save a goal against Portville.

Ellicottville’s Maddox Johnson (15) screams for joy as teammate Sam Edwards (10) congratulates him on a goal during a boys soccer team on Monday.

Ellicottville’s Ben Edwards (8) clears the ball off the goal line to save a goal against Portville.

PORTVILLE — The Portville boys soccer team had every intention of sticking to the script, one it had been writing for the last two years.

Midway through the 2020 season, the Panthers fell to Ellicottville, 3-2. Since then, however, they hadn’t dropped a single game in league play, going unbeaten last year while sitting 2-0-1 to start this season. Along the way, it had taken out the Eagles four times, once in the ‘20 finale, which decided both the regular season championship and No. 1 seed for sectionals, twice last year and again in the first round of this year’s Allegany-Limestone Tournament.

That streak came to an end Monday, however, when Ellicottville finally flipped the script.

Cameron Mendell and Maddox Johnson both scored late first-half goals, those coming just 1:30 apart, and the Eagles earned some redemption with a 2-0 victory over Portville in a CCAA III East matchup. Ellicottville grabbed a tight hold on first place in the league standings (4-0-0 to PCS’s 2-1-1) while also getting a bit of a proverbial monkey off its back.

“Tonight, it seemed like the way the game started, the first 20-25 minutes, I really kind of had that feeling like it was going to go that same way,” Portville coach J.J. McIntosh acknowledged. “I thought my guys were really dominating play. We had chance after chance, but they just weren’t falling for us. One hit off the crossbar … their keeper made several saves that we call last-second saves — he just gets a good angle, recovers and denies us.”

Both of the Eagles’ goals came after near-breakaway rushes up the field from Ellicottville leading scorer Sam Edwards. On ECS’ first goal, Edwards was denied initially before Mendell banged home the putback for what proved to be the game-winner.

“It seemed as though the more we pushed up, the more we got complacent a little bit,” McIntosh added, “and they were able to counter, and really that was their attack. Edwards is very fast with the ball; he can really make a turnover in the middle of the field count against you. Sam kind of taking over, attacking with space, that was it.”

Troy VanSickle made two saves for Portville while Evan Bauer earned the shutout for Ellicottville. The Eagles (5-1-1) capitalized on two of their four shots while Portville (4-3-1) went 0-for-9.

“They made their chances count,” McIntosh went on. “They executed when they had to. It was one of those nights where we couldn’t find the back of the net. I don’t want to take anything away from Ellicottville’s defense; they flocked to the ball, they were aggressive, they were playing hard. I think they were playing with a little chip on their shoulder — they were in first place and they wanted to go out and prove it.

“We’ve been dominant the last couple times we’ve played them, and they were able to counter on us and tie (this year’s) series 1-1.”