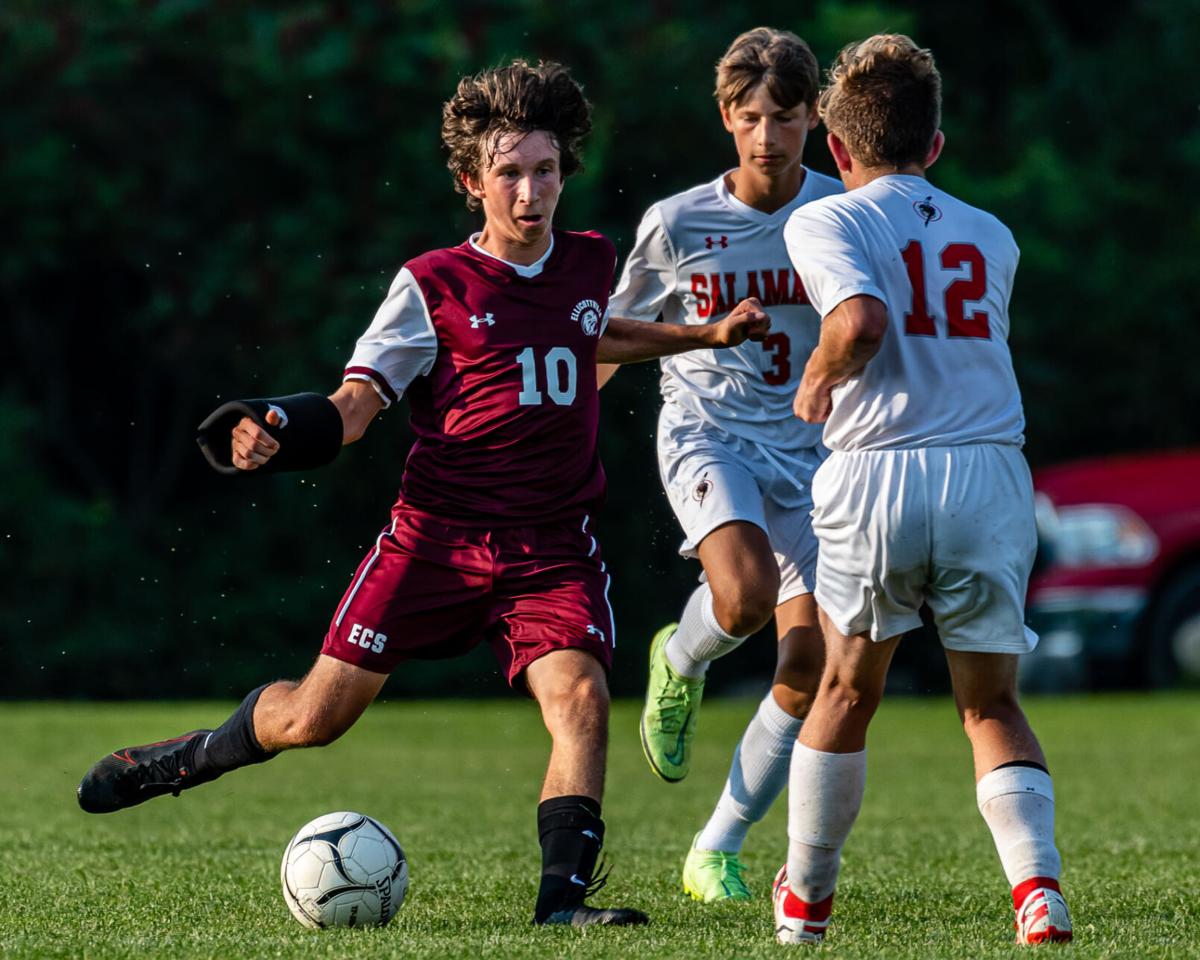 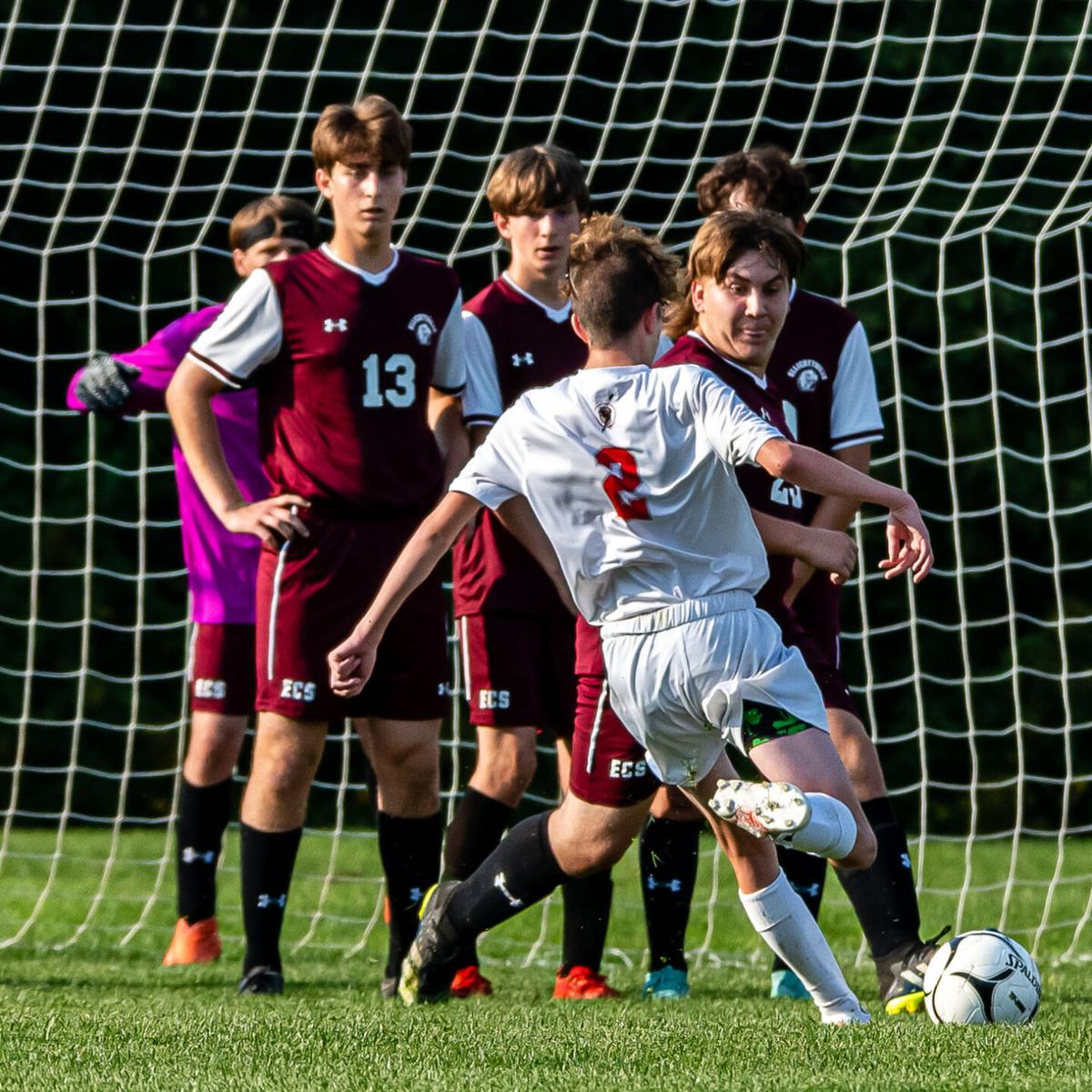 Salamanca/Cattaraugus-Little Valley’s Jorden Ambuske (2) sets to take a direct kick around a wall of Ellicottville defenders on Tuesday.

Salamanca/Cattaraugus-Little Valley’s Jorden Ambuske (2) sets to take a direct kick around a wall of Ellicottville defenders on Tuesday.

As high school boys soccer returned on time this fall, some teams hit the pitch at full speed, while others took some necessary time to ramp up with new faces in big spots in their lineup.

Ellicottville had a stellar 2020 campaign, going 8-5-1 with a senior-laden squad led by Big 30 All-Stars Bryce Butler and Noah Steinbroner and making the Section 6 Class C semifinals.

But 12 seniors from that team are gone, and coach Matt Finn’s squad has had some bumps in the road to start the year.

“We have limited varsity experience on this year’s team,” Finn, the 18th year coach, said before the season. “We have only one returning starter and five returning players, but we will be fast and athletic.”

Ellicottville got its first first win of the season with a 6-1 CCAA East divisional triumph at the expense of Salamanca/Cattaraugus-Little Valley on Tuesday, Sept. 14. At 1-4-1 through a non-league loss to Fillmore on Saturday, Ellicottville hs had some ups and downs: it lost its opener in the Allegany-Limestone Gator Cup small school tournament to Avoca/Prattsburgh 7-1, but tied Westfield/Brocton 3-3 in the consolation game Sept. 4. W/B got revenge just five days later however with a 6-0 home non-league win.

The Eagles haven’t had trouble scoring (13 goals in six games), but have allowed markers at an even higher rate.

Sophomore midfielder Sam Edwards leads the team with eight goals through last week. Junior forward Caedon Wyatt is second on the team in points with three assists and a goal.

Defending CCAA East champion Portville has a leg up on repeating at 2-0, while the rest of the division sits at either 1-1 or 0-2 so far.

Randolph has had its open ups and downs, starting 2-2 through last week. A 3-2 comeback victory over Ellicottville gave the Cardinals their first win in the CCAA East division, rallying from a 2-1 deficit early in the second half on Thursday.

Coach David Pihlblad returns for his second year after guiding the team to a 4-4-1 record in last year’s shortened fall season. The Cardinals have just two seniors listed on their roster, both defensemen (Ben Hitchcock and Omar Johnson), but a batch of youngsters have already made a big impact on the stat sheet.

Salamanca/Cattaraugus-Little Valley, meanwhile, is still seeking win No. 1 after an 0-5 start. Jorden Ambuske and John Matteson have the lone goals of the season thus far for the War Wolves.

Coach P.J. Peterson is in his second year leading the War Wolves as a merged program with 14 years of prior experience at CLV.

“This is a good group of hard working players,” Peterson said before the season. “We lack experience heading into the season but our attitude and effort has been good so far. Our success will depend on our older players setting a good example and maintaining a positive attitude. If we can be mentally tough we can be successful.”