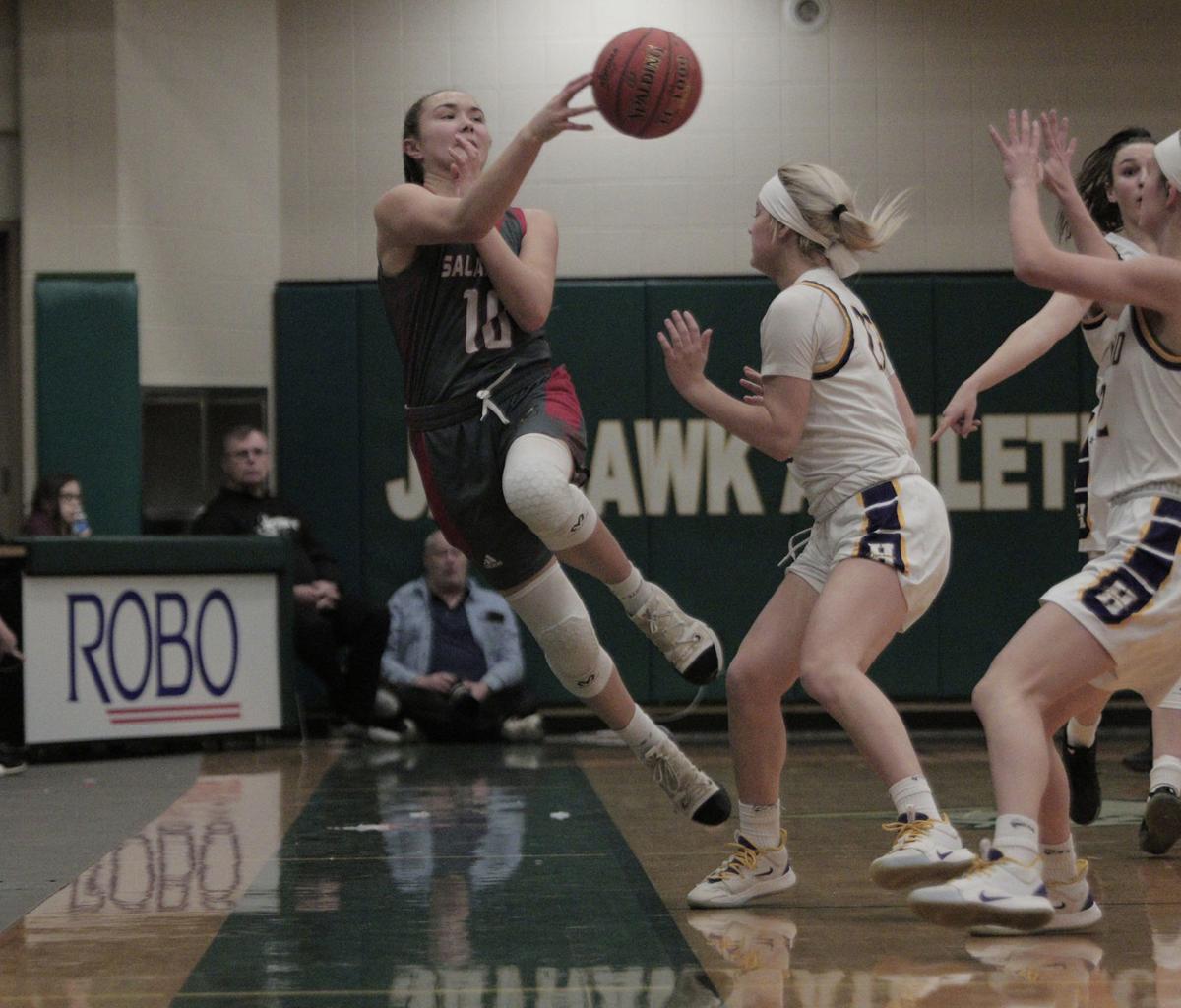 Salamanca’s Marla Warrior (10) saves the ball as she falls out of bounds during a Section 6 Class C2 semifinal girls basketball game against Holland on Thursday at Jamestown Community College. 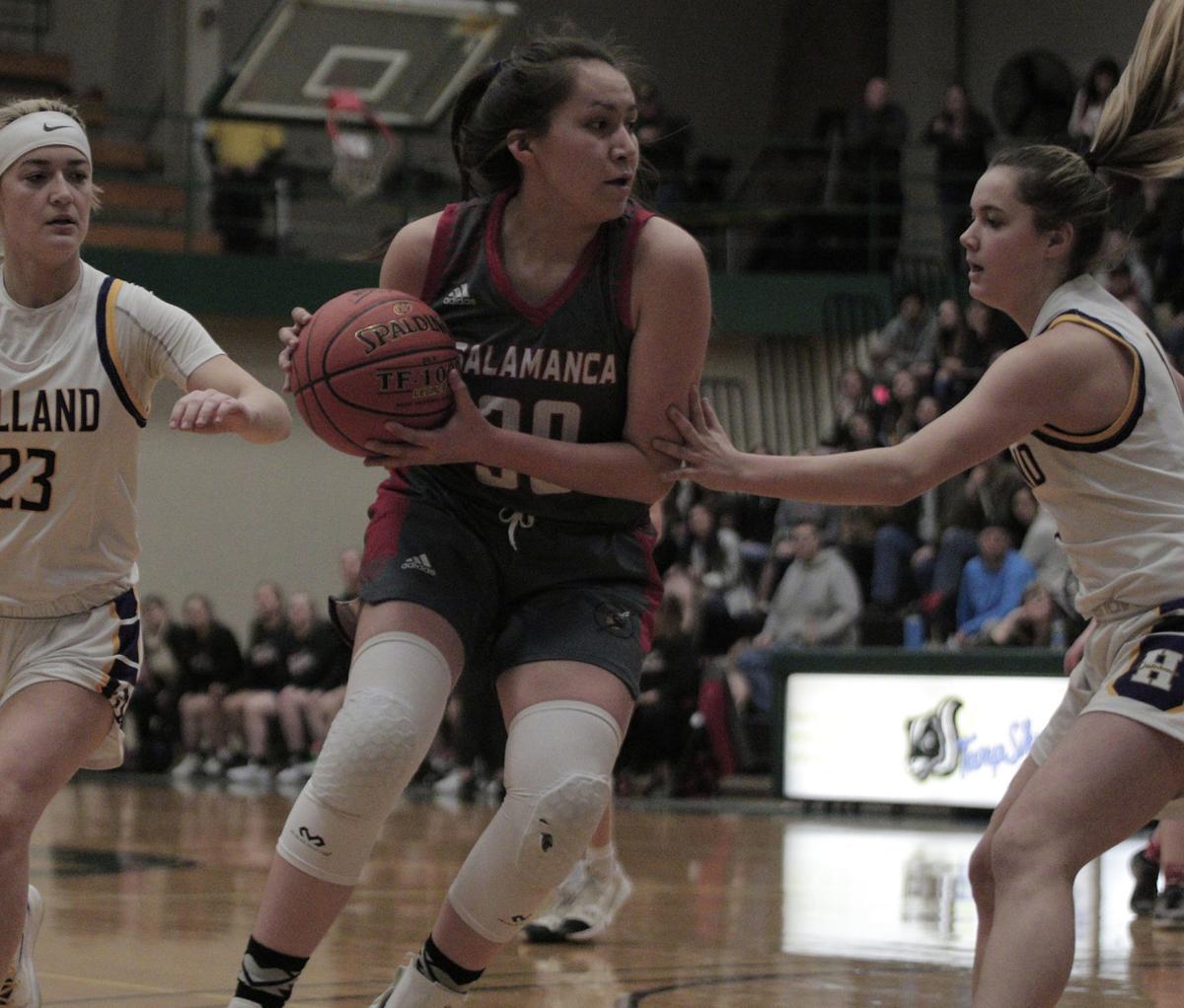 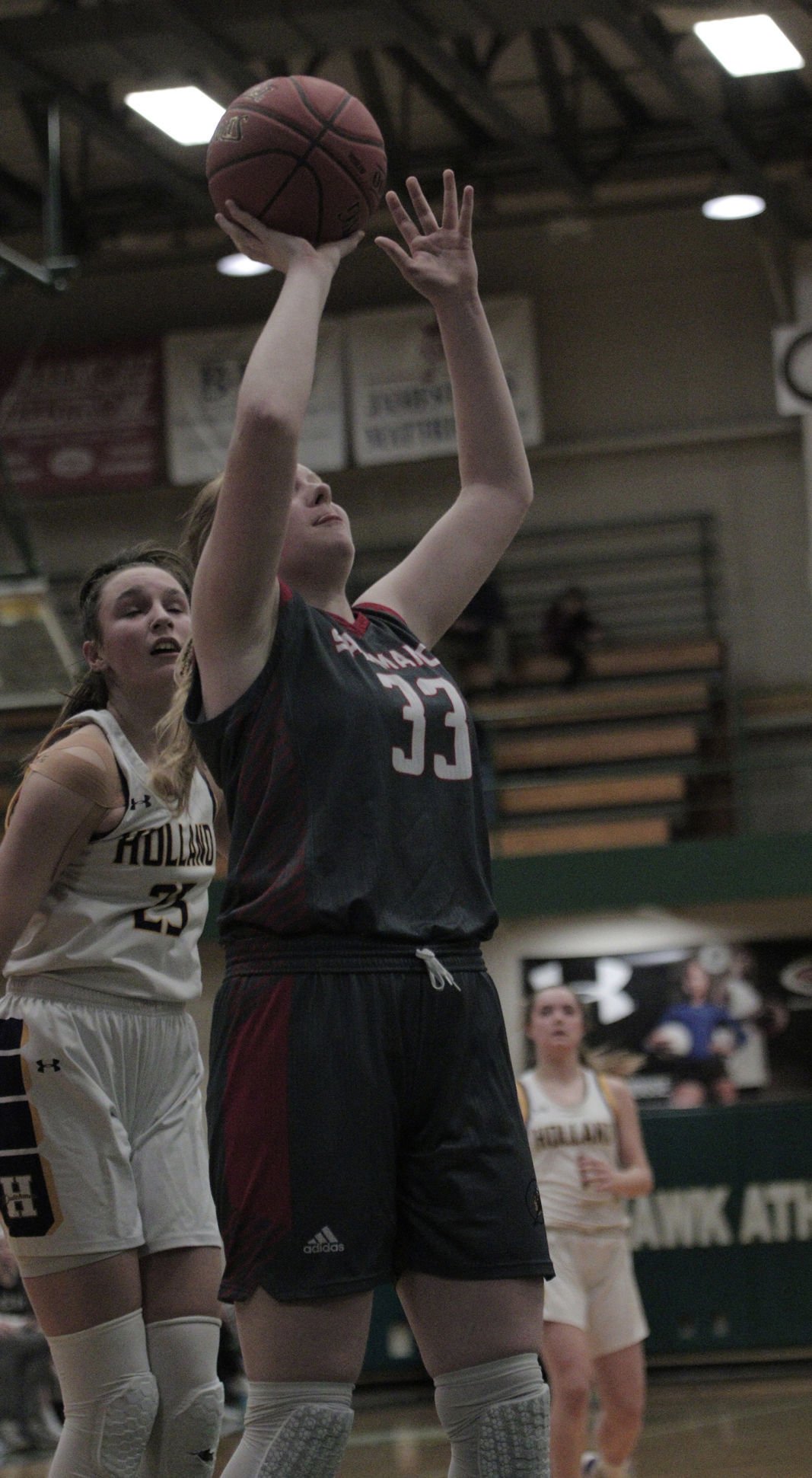 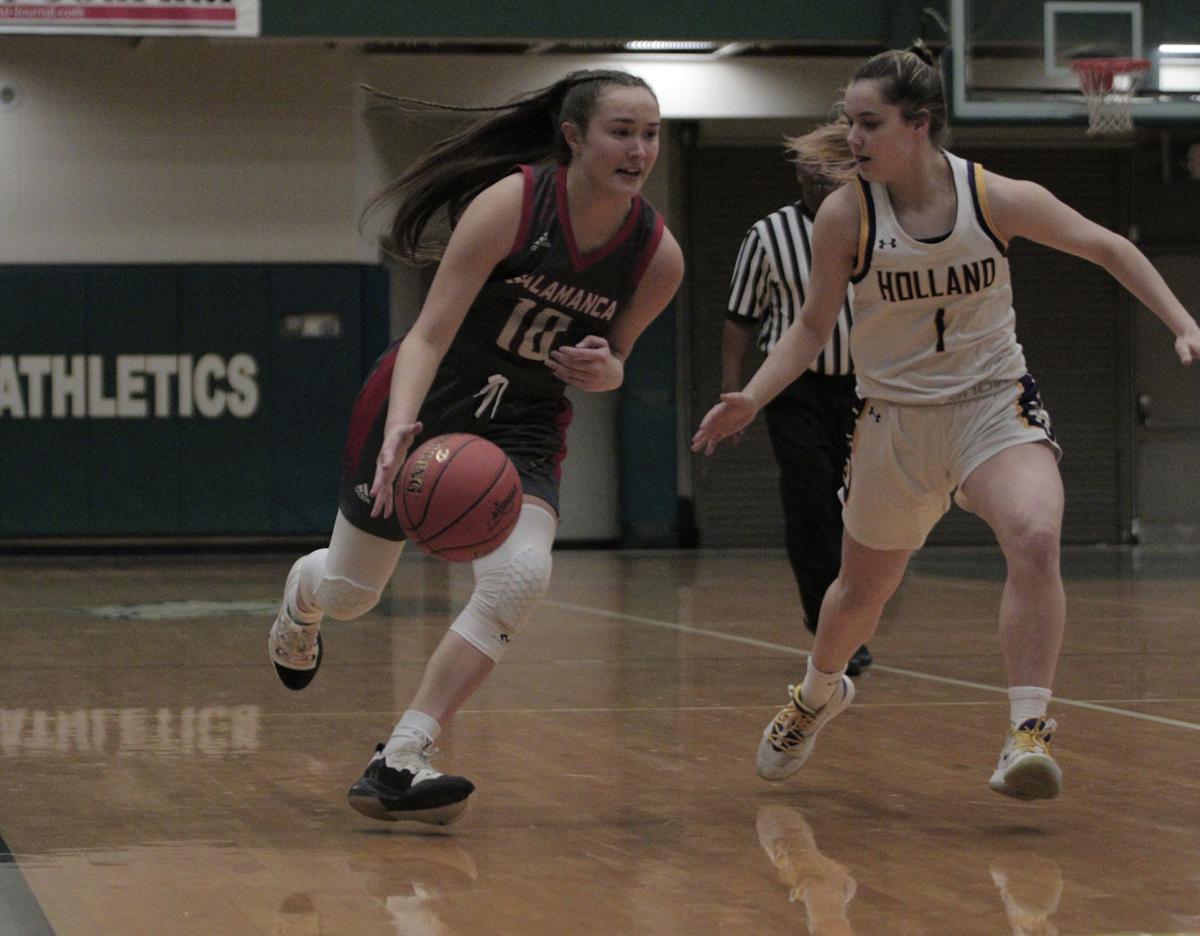 Salamanca’s Marla Warrior (10) saves the ball as she falls out of bounds during a Section 6 Class C2 semifinal girls basketball game against Holland on Thursday at Jamestown Community College.

JAMESTOWN — For a quarter, underdog Salamanca showed it could play with the fifth-ranked Class C team in the state.

But playing at such a pace to keep up with Holland proved to be too much for the Warriors Thursday night, bringing an end to a second-half turnaround to Salamanca’s season. Salamanca outscored top-seeded Holland 22-20 in a fast-paced second quarter, cutting the Dutch’s lead to 40-30 by halftime. But Salamanca wouldn’t get any closer as Holland pulled away for an 81-50 win.

“I told my girls that the press was scary for other teams because they didn't look ahead, and we made the point of always looking ahead,” Wallin said. “So when we were able to break it and get easy buckets in transition, it was great. Ultimately that ended up killing us because we were gassed and you could tell in the fourth quarter, we were just physically exhausted.”

Sophomore forward Claire Pikett scored 17 of her 25 points in the second half to pace Holland, adding team-highs with 14 rebounds, seven blocks and five steals.

Salamanca tried to use a size advantage, but with limited results.

“But we went with the same plan that we had against Ellicottville, tried to get it into our bigs, their No. 25 (Pikett), she's a very, very talented player, but she was it for the post and we had two,” Wallin said. “So trying to get it into Kylee and Jaeden and maybe trying to get her into foul trouble, but outscoring them 24-22 in the second quarter was great, and we closed the gap, and that's the team that we've become, the not roll over and die, where we might have last year. This year you saw that fight back, and it just came down to all heart.”

“I've got to give them credit,” Holland coach Sam Arnold said of the Warriors. “They're playing hard and they hit shots that I didn't think they would hit and the ball was bouncing their way. The second half, we just made a slight adjustment defensively. We like to play aggressive, we like to play full-court basketball in transition because that's where our playmakers are their best. I was impressed with how they made the change and responded to it.”

After starting the season 0-7, Salamanca (9-12) had won six of its last seven games entering the semifinal.

“I want them to remember this feeling, this feeling of despair, maybe a little bit of regret, this pit in their stomach,” Wallin said. I want them to take that into the offseason with them. I think that we are finally starting to buy into what I'm selling in that if we put in the work, the success will come. You saw that the second half of the season, once we hit league play, they built some confidence and getting some wins under your belt always helps.”

But the Warriors will try to build on this run without three starting seniors: Dowdy, Kennedy and Aly Hill.

“I think the presence of Nizhoni helped (Kylee) because we had a point guard that was willing to sacrifice her own personal stats for the betterment of the team and we were able to go to our post,” Wallin said. “Kylee is a kid with a ton of potential and she showed it in the last three games. It will be hard to fill of my starting seniors: Aly, her defensive side of the ball; Nizhoni, just the presence and calmness that she brings to our team. All three of those seniors are going to be hard to replace.”

Holland will play Franklinville Saturday at 2 p.m. for the C2 crown. The game features the No. 5 and No. 12 teams in the state Class C rankings. Arnold channeled wrestler Ric Flair in his excitement to face last year’s Class D state champions.

Wallin was more than impressed by her team’s opponent.

“The way that they play, they're my favorite for C,” she said. “They've got two, three shooters at any given time. Their post is phenomenal, she's quick, athletic. We had the plan to know where 32 (Myla Kline) was and then her sister (Kaylin) comes out and bangs down three back-to-back threes. So they're very good. I think if I'd been able to have a deeper bench, maybe sub to keep kids a little more fresh, we might have been able to keep it a little more competitive. Heck, I was happy being down 10 at halftime, but they're good. They're really good.”

Arizona-UCLA storylines: On Gunnell’s coping skills, a change on the road and the Cats’ grapplers

Before they were Huskers: Falck showed great glove work as a football and baseball standout in Minnesota

Knox excelling after a role change in Missouri’s new offense

Rain. Potential for heavy rainfall. High 43F. Winds NE at 5 to 10 mph. Chance of rain 100%. Rainfall possibly over one inch.