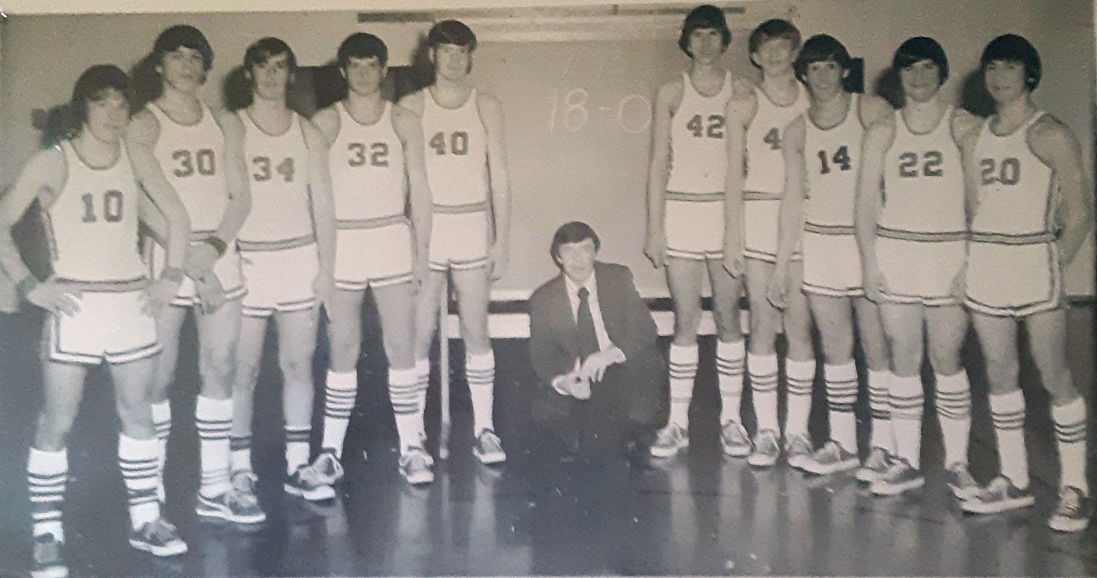 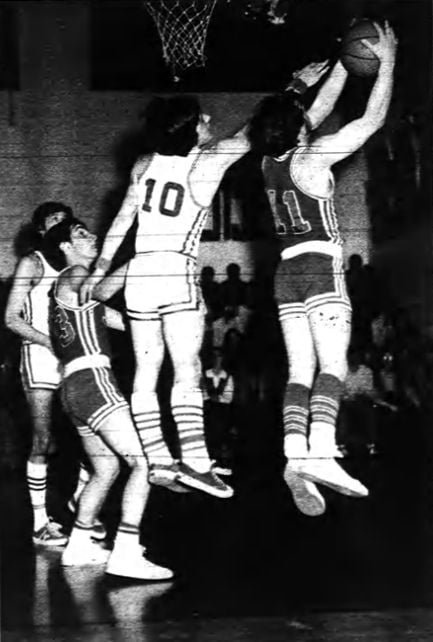 In this file photo, Cattaraugus’ Mike Gowan (10) leaps for a rebound against Allegany’s Pete Peterson (11) during a Cattaraugus-Ere League boys basketball game, which Cattaraugus won 99-75 to finish an 18-0 1972-73 regular season.

In this file photo, Cattaraugus’ Mike Gowan (10) leaps for a rebound against Allegany’s Pete Peterson (11) during a Cattaraugus-Ere League boys basketball game, which Cattaraugus won 99-75 to finish an 18-0 1972-73 regular season.

(Editor’s note: This is the next in a series in which the Times Herald and Bradford Era will be presenting the best season/team accomplishment for every school in the Big 30. The staffs at both papers made a singular selection for each school in conjunction with current and former coaches and athletic directors. Today: Cattaraugus-Little Valley.)

CATTARAUGUS — No matter what style the opponent threw at the 1972-73 Cattaraugus boys basketball team, the “Big Red” could beat it.

In those days, pre-shot clock and three-point line in New York state, Cattaraugus still played fast enough to score 100 points twice in just a 32-minute game. And when opponents, such as Portville, slowed it down, Cattaraugus could grind out a win in the 20s. No team ever bested that group from Cattaraugus, led by senior 6-foot-6 big man Bob Mattison, which finished 21-0, including an 18-0 regular season and three postseason wins en route to a Section 6 Class BB championship. With no state tournament in place, the Big Red went home undefeated, finishing one of the Big 30’s greatest basketball seasons in any era.

Mattison, who won the division’s player of the year as a senior, didn’t play his junior year after his father died the previous summer. Without him, the Big Red went just 3-17.

“So it was quite a turn around.”

Mattison recalled the team having “promise” his sophomore year, but his absence, combined with the graduation of a few seniors, set back Cattaraugus in ‘71-’72.

“I had a real rough go at home. There were some dynamics at home that weren’t the best,” he said. “I didn’t play ball my junior year, so the team really took a dip backwards because we lost Pete Weishan, we had lost Doug Preston, I didn’t play. All the seniors had left and it was a tough go. We came back the next year and people just kind of jelled. I think everybody knew from the beginning that we had a lot of promise.”

Coaching the Big Red was the late Bob Johnson, with help from assistant/JV coach Chuck Senn, known most prominently for his extensive baseball coaching career. Mattison credited Johnson for keeping the team “well-grounded,” and prepared for any opposing defense.

“He didn’t care who you are, what you did last night or last week or whatever, it doesn’t matter,” said Mattison, who now owns and operates Gramco, a feed company for farm animals, based in Springville. “Everybody was going to be well-grounded as to who you are, everybody was important to that team and everybody played that way. It was just a great group of guys. That made it special. I don’t know why, but I felt like it was a special group of guys because everybody knew what they needed to do. When they came into the game, it was like everybody knew what was supposed to be done.”

“It was tough man-to-man defense,” Hill said of Johnson. “He pushed us, he wasn’t laid back by any means.

“Coach Johnson got the most out of us.”

THE SEASON’S closest game occurred early, in just the third contest. Visiting Hinsdale, Cattaraugus rallied from a 14-point fourth-quarter deficit. Mattison said his team played “out of sorts” and was cold most of the night after a lengthy delay.

“We went out and warmed up, we were all warmed up and ready to go, the referees were checking things out and the rim was cracked,” Mattison said. “So they had to put a new rim up. We went back to the locker room and we sat around in a cold locker room for a while. It took us (a while), we were not in the game. We came out, we were just playing flat.

“We got out-played until the fourth quarter and just that quiet desperation. There was no panic, it was just determination on the whole team. It was great. That was when I think we learned that we had a special team and we’ve got to go on. To come back 14 points like that, that was something.”

“It got down to the end there, I think we were down one,” he said. “They were shooting a foul shot and the guy missed it, I got the rebound, I turned around, threw it down to Pete Preston who was a freshman at the time, Pete pulled up just above the foul line and he just knocked it in and we won the game. That was good.”

“Bob ... I think he had 54 or 56 points (it was 57, according to Salamanca Press archives) so he outscored the other team,” Hill said. “And of course the rest of us were all wanting him to keep scoring and I know late in the game I threw him the ball in the post one time and he threw it back and said, ‘you shoot for a while.’”

CATTARAUGUS had to slow it down late in the regular season to escape a peculiar night in Portville with a 29-22 victory.

“Back in those days you had to advance the ball beyond the half mark every little while, every 20 seconds or something, you couldn’t stand out at mid-court,” said Hill, a farmer in Cattaraugus and the president of the Cattaraugus County IAABO. “No shot clock, but you did have to advance the ball a little bit. We went into Portville late in the season undefeated and the great Ray DeLand was the Portville coach and he put in a ‘stall.’ The score at halftime was 4-2 … we were down 4-2. The second half we had a couple steals and made a couple buckets so they had to play a little bit. The final score was 29-22. So it was kind of a freak game.”

“Everybody contributed. If they double- or triple-teamed me or something like that, I’d pass off to somebody else,” Mattison said. “Gosh, it worked good. It was a great year. We went to the playoffs and we were not in any danger in any of the games we played in the playoffs. We went as far as we could.”

Cattaraugus finished off the year with sectional playoff wins over Pine Valley, 78-62; Maple Grove, 68-62; and finally the championship against Silver Creek, 61-50.

What could Jordan Love do for Packers as a rookie? Amid uncertainty, coaches won’t rule anything out

Sunny, along with a few afternoon clouds. A stray shower or thunderstorm is possible. High 91F. Winds light and variable.