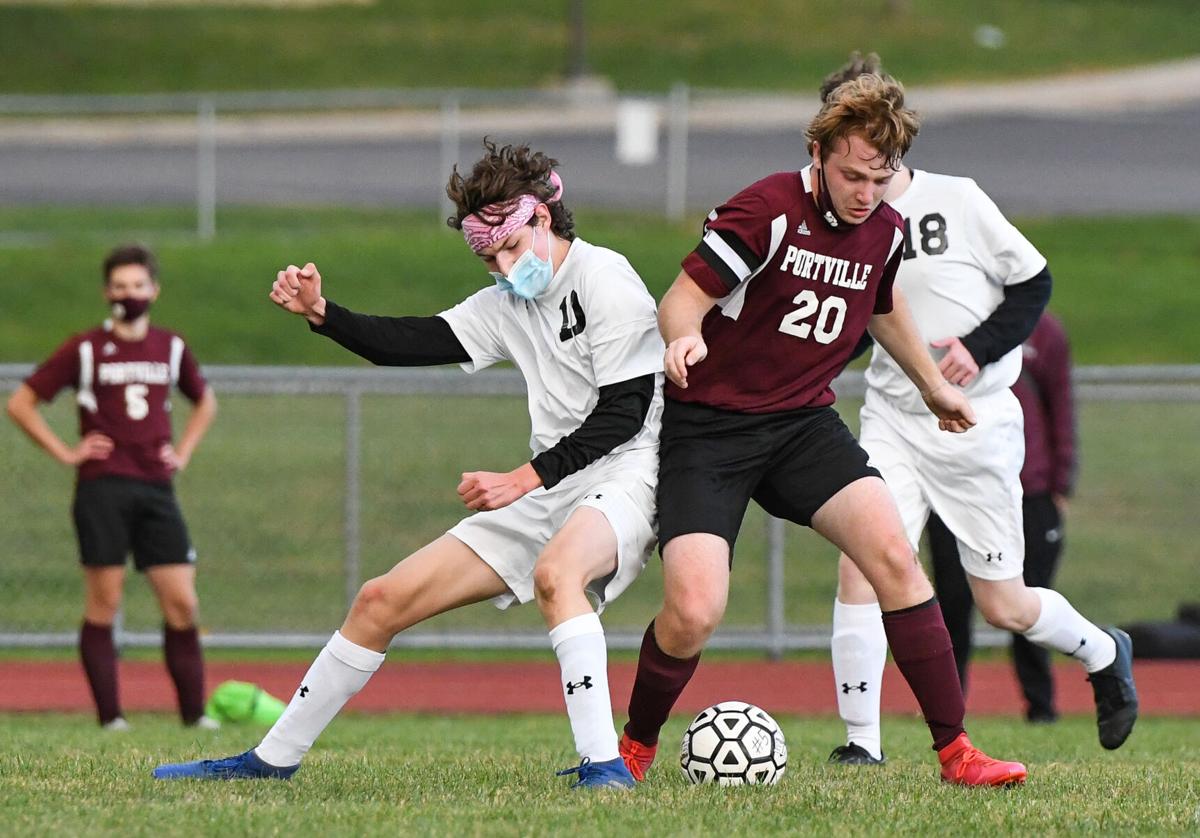 Salamanca/Cattaraugus-Little Valley's Reece Redeye-Desposito (10) fights for the ball against Portville's Nate Petryszak (20) during a CCAA East boys soccer game on Wednesday in Portville. 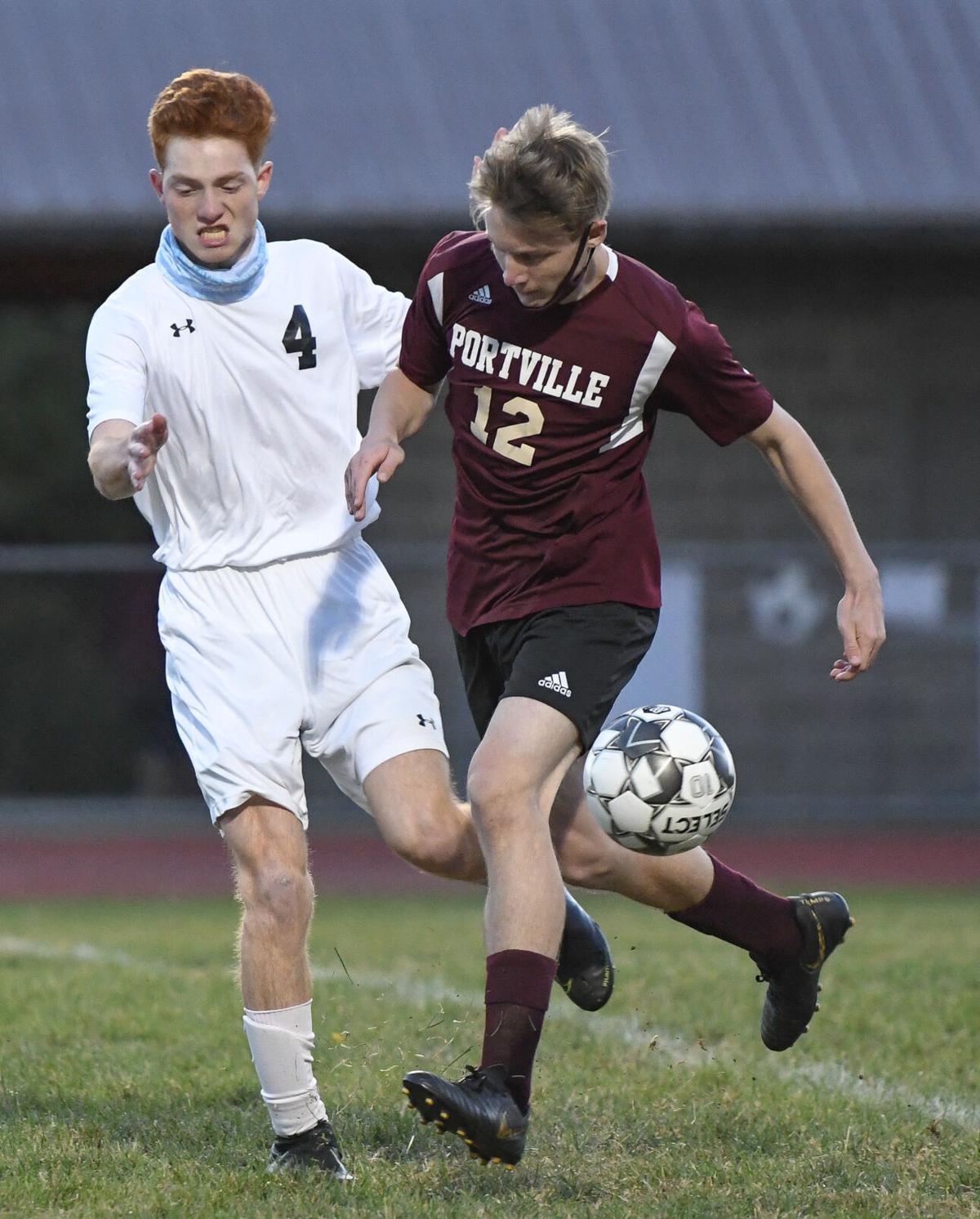 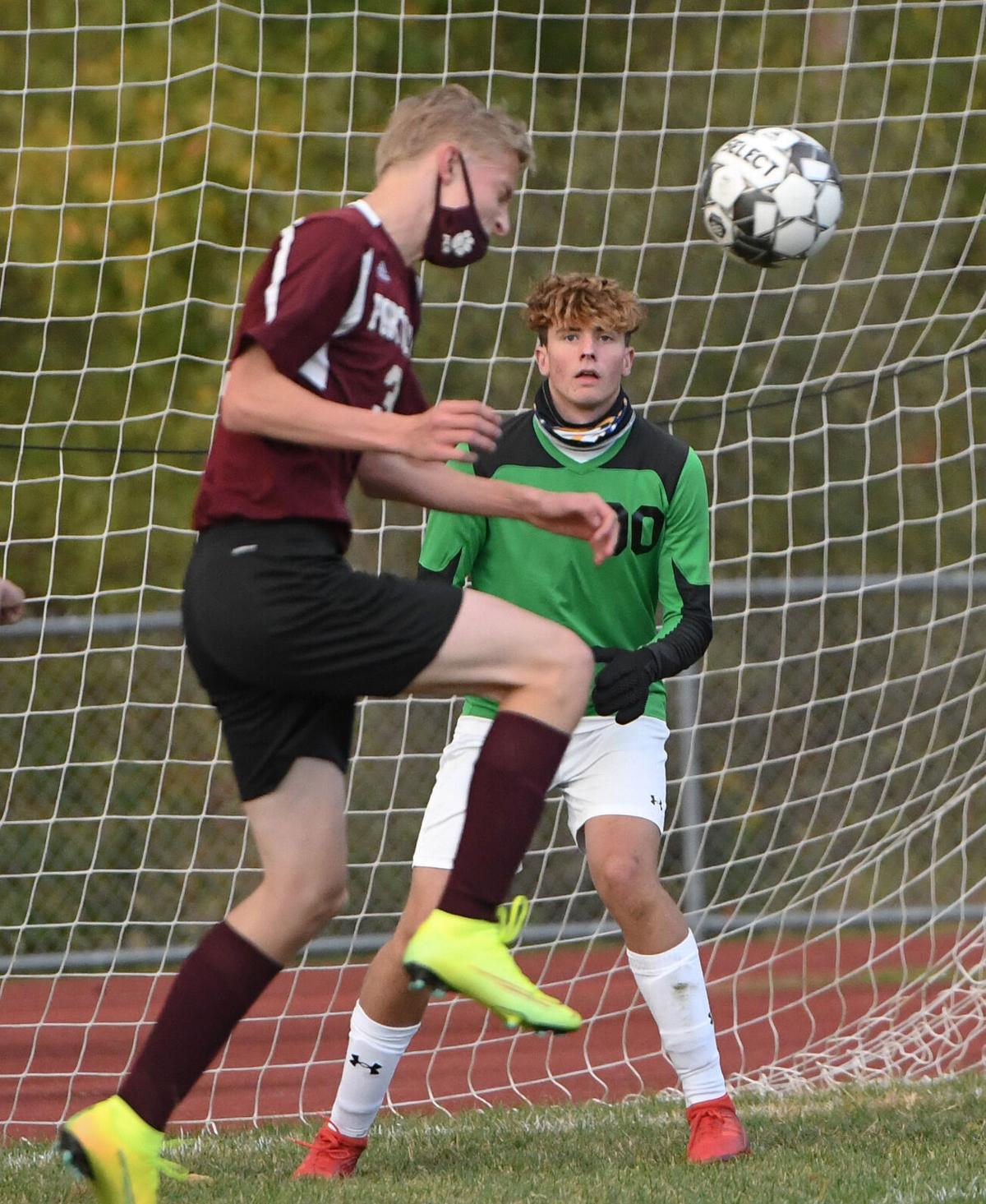 Salamanca/Cattaraugus-Little Valley's Reece Redeye-Desposito (10) fights for the ball against Portville's Nate Petryszak (20) during a CCAA East boys soccer game on Wednesday in Portville.

The new leader in charge of the merged Salamanca/Cattaraugus-Little Valley boys soccer team is a steady one, and a familiar face.

P.J. Peterson took on the job of varsity coach with plenty of experience: he led the CLV boys program for 14 years prior to the merger, and spent the last several seasons coaching modified soccer. But in many ways, he’s never coached a season like this.

The 2020 soccer season started a month later due to COVID-19 in New York and coaches could not meet with their players through the offseason. So when Peterson finally met his new team on the field for practice Sept. 21, the squad had to shake off some rust and more than a few minor injuries.

“We've got a team that's pretty athletic, but as far as teams coming in, it's taken a little bit to get into it and get into shape a little bit because they have been so inactive for so long,” Peterson said. “Some of them are coming along, but we've got a lot of injuries, a lot of feet, ankles, chins, we're hit with the injury bug probably more so than any other time in my coaching career that I've seen, just these nagging injuries, it's unbelievable.”

Peterson noted that early-season injuries, such as shin splints, are to be expected, but they’ve taken an uptick this fall.

“If they haven't been real active and then all of a sudden you get active all at once, it's normal, but it seems like this year it's just to another level,” he said. “As far as some of the conditioning I've done in the past, we haven't even been able to do it because a lot of the guys are not physically ready to do it, or the nagging injuries are preventing them from being able to do it.”

Drawing players from two school districts, Salamanca/CLV opened the season with a deep roster of 21, including eight seniors. CLV could not hold a modified team this year, but Salamanca did.

“So there's some experience,” Peterson said. “A couple of seniors haven't played and are just coming out this year, but we do have all the way down through the freshman class, we have some talent all the way through the program. CLV doesn't have a modified team this year, but Salamanca does. But I'd say that's a good number. With injuries and dealing with academic ineligibility, if we get to the point where we have everybody ready to go, I'd be real happy with it.”

While a merged team always carries logistical complications, such as travel (the team practices most of the time in Cattaraugus due to Salamanca’s building projects this year), Peterson said the players get along naturally.

“These guys know each other, they've played with each other for five years, they get along well,” Peterson said. “You get kids on the field, they don't really think about which school they come from. As the kids get to know each other. It becomes less of an issue.”

Salamanca/CLV started the season 0-2 with losses to Portville and Jamestown last week. In this shortened season, Peterson sees plenty of attainable goals that would make him view the campaign as a success.

“At this point, it's about attitude, effort, playing hard, getting better every day,” he said. “We've got 12 games, playing some pretty talented teams, I think if we put that all together with the right attitude and the right effort, we can compete against anybody that's on our schedule. But we have to do those things. If that happens and you've done the best that you can do, then you can live with that, whatever it may be.”

'Make them remember your name': Rountree leaves mark on MU