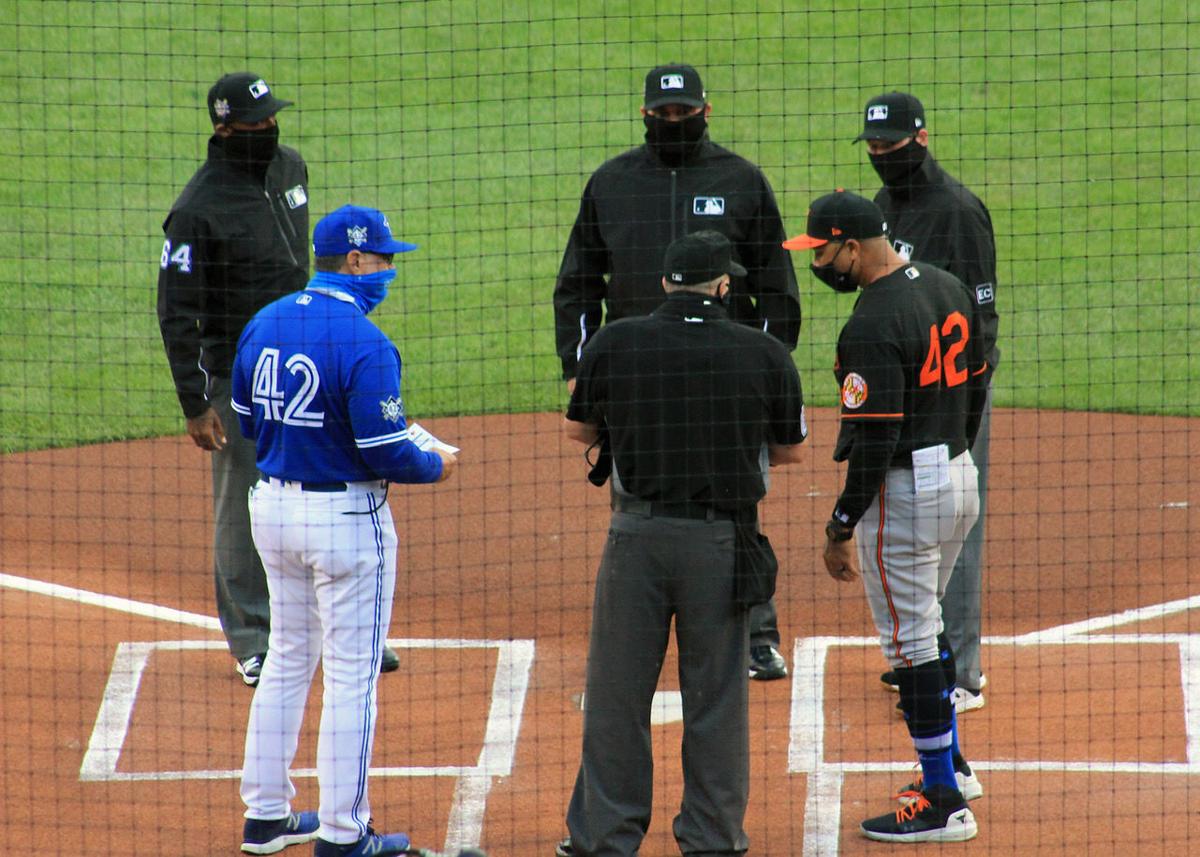 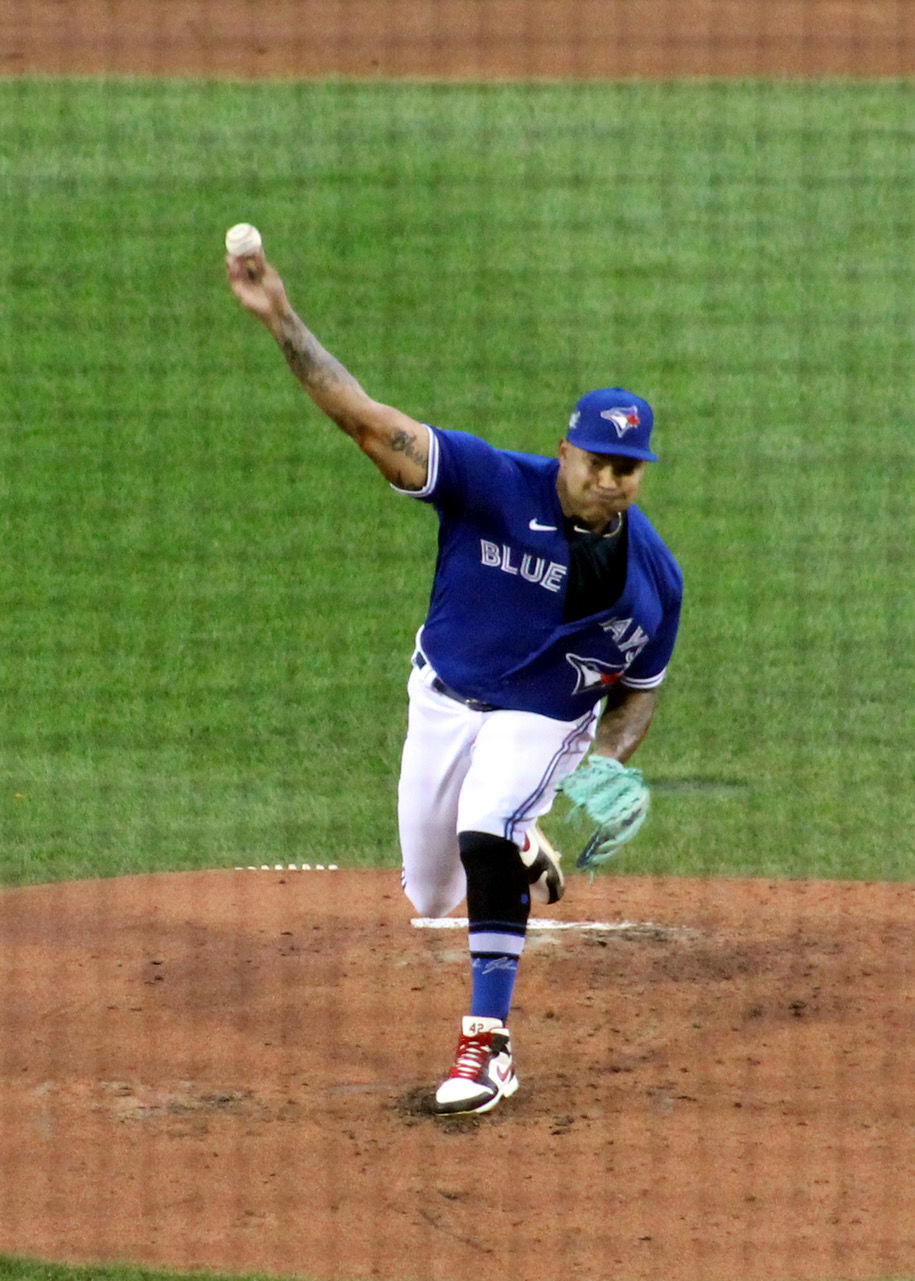 Blue Jays pitcher Taijuan Walker throws during a Saturday night game against the Baltimore Orioles at Sahlen Field. Walker wore No. 42 on his uniform and cleats as the Blue Jays and Orioles continued the Jackie Robinson Day celebration into the weekend.

Blue Jays pitcher Taijuan Walker throws during a Saturday night game against the Baltimore Orioles at Sahlen Field. Walker wore No. 42 on his uniform and cleats as the Blue Jays and Orioles continued the Jackie Robinson Day celebration into the weekend.

BUFFALO — Given the chance to celebrate Jackie Robinson through the weekend, and not just one day, the Toronto Blue Jays didn’t hesitate.

Following Friday night’s league-wide celebration of Robinson, the baseball world’s salute to him continued as Major League Baseball gave teams the option to wear his number through the weekend. The Blue Jays and Baltimore Orioles both wore 42 on every uniform again Saturday and Sunday.

“MLB sent an email that if we wanted to wear 42 again for this weekend, we could, and we decided we wanted to, so we did,” Blue Jays manager Charlie Montoyo said following a 5-0 win over Baltimore Saturday night at Sahlen Field.

Robinson, the man who broke baseball’s color barrier in 1947, had ties to Canada courtesy of his minor league career and even visited Buffalo in 1946. Robinson played nine games in Buffalo, visiting Offermann Stadium for the Montreal Royals, the International League affiliate of the Brooklyn Dodgers.

Major Leaguers honor Robinson each year as every player wears his No. 42, usually on April 15, the day he broke the league’s color barrier in 1947. But with the baseball season delayed into mid-summer due to COVID-19 and an ensuing labor dispute, MLB instead slated the 2020 Jackie Robinson Day for Aug. 28, the anniversary of the 1963 March on Washington led by prominent civil rights leaders including Martin Luther King Jr., which Robinson and his family attended.

YOUNG BLUE Jays slugger Vladimir Guerrero Jr. hit a home run Friday night against the Orioles — the first opposite-field blast of his major league career — and wanted the ball as a keepsake.

“I decided to get the ball because it was Jackie Robinson Day and actually it was my first Jackie Robinson game or day that I’ve played in the big leagues,” Guerrero said, through team translator Tito Lebron.

Robinson’s annual baseball holiday landed at the end of a week in which athletes in various sports — starting with the NBA but continuing to the WNBA, pro tennis and MLB — boycotted events to bring a spotlight to racial injustice in response to the shooting of Jacob Blake in Kenosha, Wisc.

Pitcher Taijuan Walker said he watched ‘42’ before his first start with the Blue Jays on Saturday, following a trade from Seattle, to honor both Robinson and Boseman.

Walker threw six scoreless innings Saturday after an emotional week that included learning his family members “lost everything” in Louisiana and also sitting out Wednesday in the Mariners’ protest of a game against San Diego.

“It’s definitely been an emotional couple of days,” Walker said. “Just being away and really thinking about them when they’re going through all this right now. Hopefully I was able to bring a little bit of joy to them going out there and pitching. Hopefully they were able to watch me pitch. It’s a tough time for everyone right now and especially down in Louisiana, it’s very emotional.”

He wore red and blue Air Jordan cleats Saturday, with the number 42 atop the tongue of one shoe.

The ultimate Husker fans: Five things to know about how to step up your gameday look