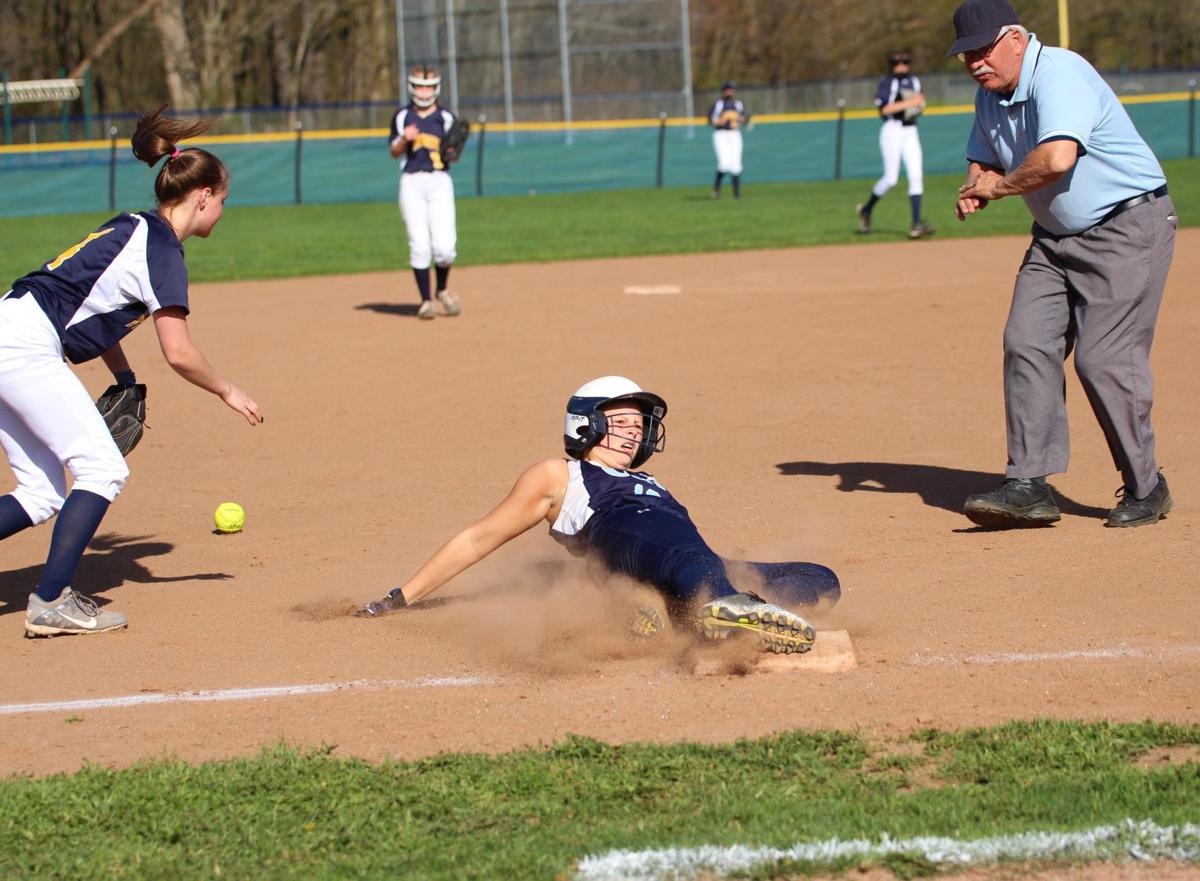 Cattaraugus-Little Valley’s Brooklynn Hill (12) slides into third base after hitting a go-ahead two-run triple in the third inning of a CCAA II East high school softball game against Frewsburg Monday in Cattaraugus. 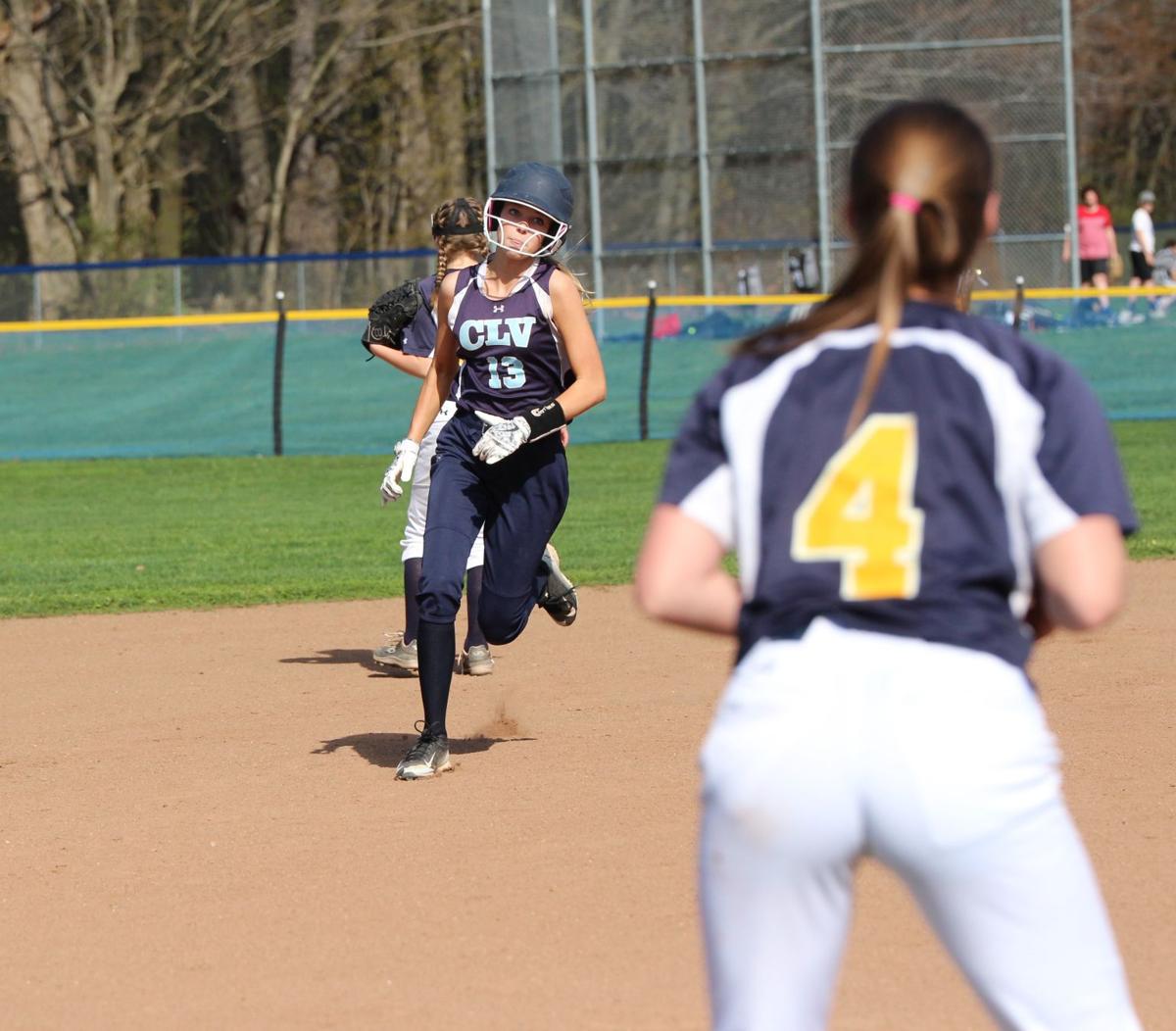 Cattaraugus-Little Valley's Bridget Murphy (13) runs towards third base on the triple. 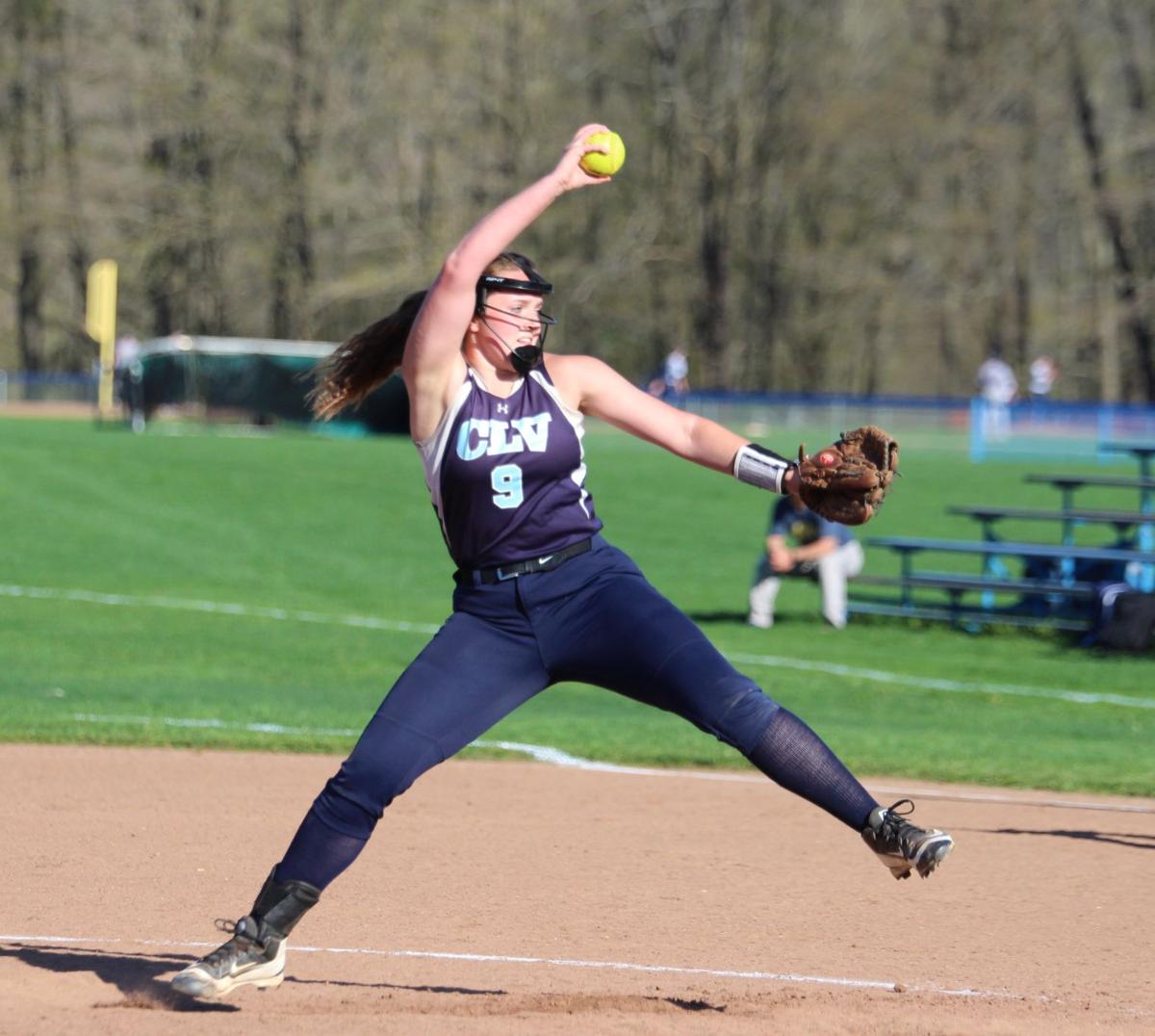 Cattaraugus-Little Valley’s Brooklynn Hill (12) slides into third base after hitting a go-ahead two-run triple in the third inning of a CCAA II East high school softball game against Frewsburg Monday in Cattaraugus.

Cattaraugus-Little Valley's Bridget Murphy (13) runs towards third base on the triple.

CATTARAUGUS — Shaking off a shaky start, the Cattaraugus-Little Valley softball team ended a losing streak Monday and hopes it started another winning one headed into the playoffs.

In a season defined by streaks, the Timberwolves climbed back to .500 (6-6, 5-3 in league) with a 6-3 CCAA East II victory over Frewsburg, immediately rallying after the Bears took a 3-2 lead in the top of the third with a two-run triple from Brooklynn Hill in a three-run bottom half of the inning.

With half of their losses in an 0-3 season-opening trip to Myrtle Beach, S.C., the T-Wolves then ripped off a five-game winning streak before losing three straight last week to the league’s top two teams, Franklinville (a hitless doubleheader sweep) and North Collins.

“Much better,” C-LV coach Heather Kagelmacher said, comparing Monday’s game to last week. “I feel like they showed up today to actually play, which was one of our biggest focus points. Last week was prom, so I feel like their heads were not focused on the game. I think it was a good wakening for them that when you play stellar for one week and then you just go down the tubes the next week, they have to show up every single game.”

C-LV pitcher Emma Rupp struck out seven and walked two, limiting the Bears to five hits. She threw four straight scoreless innings after C-LV retook the lead, with just two hits and a walk against.

C-LV’s offense marked seven hits, including triples by Hill and Bridget Murphy and a double by Lauren Eaton, who went 2-for-3 with two RBI.

Frewsburg pitcher Makenna Adams struck out nine, and she and Kiah Johnson had two hits each. The Bears fell to 3-8 (3-5 league).

Kagelmacher said she wanted to see offensive improvement before the season, and Monday she got big hits from her No. 8 and No. 9 hitters in Murphy and Mackenzie Ryan, whose two-out single sparked a run in the fourth. Leadoff hitter Lexi Wulf singled, stole a base and scored twice.

“Production from everywhere, putting the bat on the ball at some point,” Kagelmacher said. “You've got to put the ball in play in order to actually score any runs. That is what I'm looking for and I'm still looking for better defense because it could have been a little bit better today, but they didn't create too many errors for themselves. I'm happy with the way they've been hitting.”

On the defensive side, she’s happy to see Rupp pitch to contact regardless of strikeout numbers.

“It's a full defensive effort,” Kagelmacher said. “She's a dominant pitcher but it's not like she's an overpowering pitcher. She can make them put the ball in play but she makes the pitches to get ground balls or pop-ups. It's not like hard-hit balls, which is what we need her to do. I don't care how many strikeouts she has as long as she's hitting her spots where she's supposed to get the ground balls that we need.”

“Their pitcher seemed to be mixing her pitches up as far as her speed and spots, which is a testament to her,” Blanchard said. “She did a nice job of that and in a game like this, you don’t have that many opportunities normally. When you’ve got that opportunity you’ve got to take advantage of it.”

C-LV visits Pine Valley on Wednesday and plays host to Ellicottville on Friday in its final league games and tune-ups before the Section 6 Class C playoffs. For this streaky young team with one senior, Kagelmacher just wants to see a complete effort.

Sound waves: What others are saying about Friday's Husker game

Knox excelling after a role change in Missouri’s new offense

Partly cloudy skies this evening will give way to cloudy skies and rain overnight. Low 38F. Winds light and variable. Chance of rain 80%.