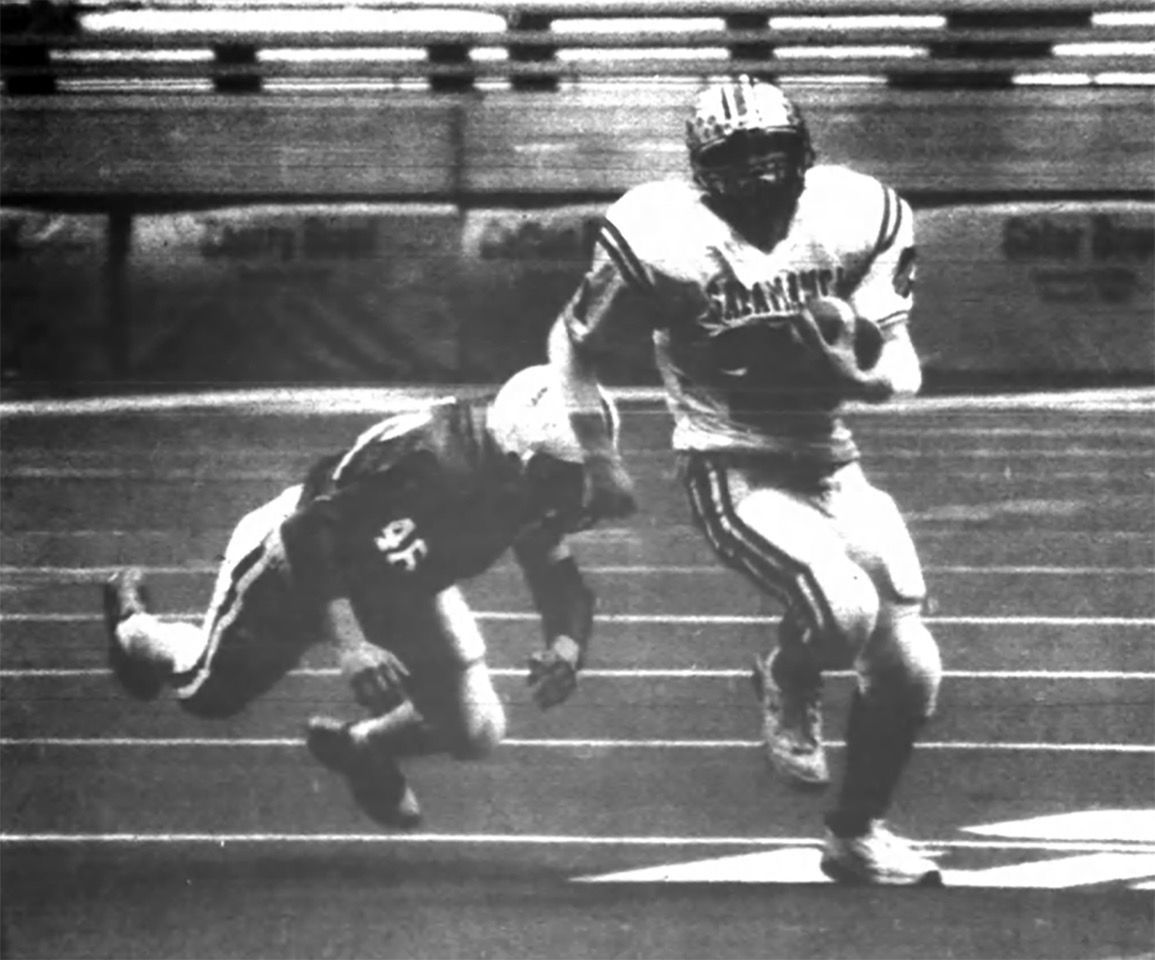 Salamanca’s Jason Wass runs after catching a pass from Mike Potter in the New York state semifinals against Delhi at the Carrier Dome in 1999. 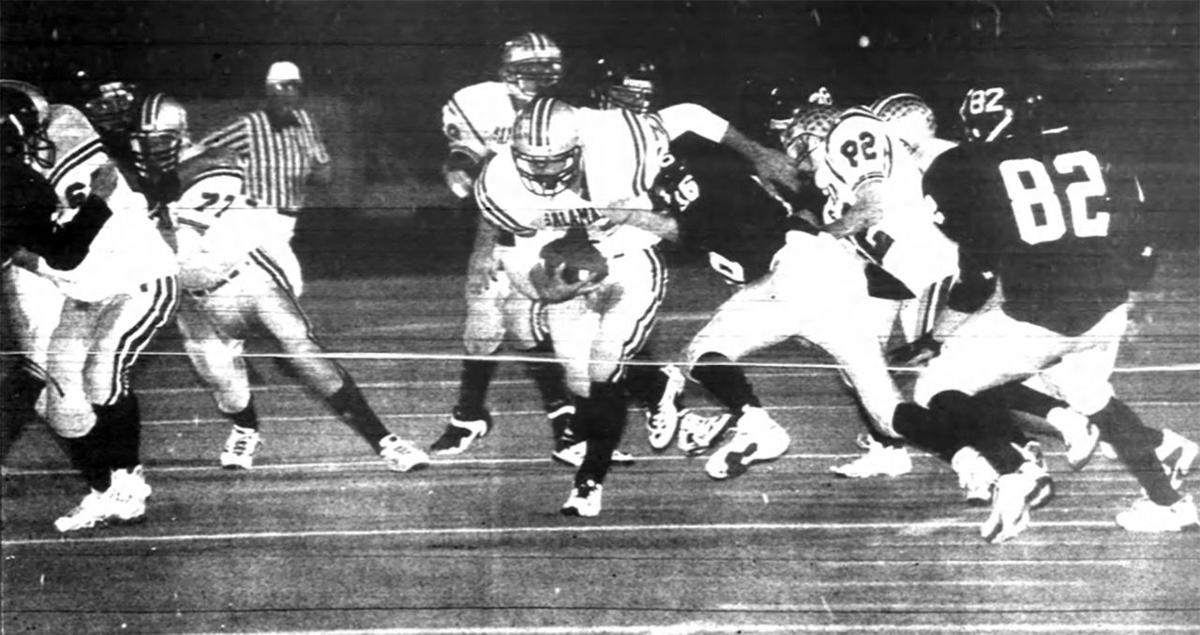 Salamanca running back Josh Hostuttler pushes ahead for a first down against LeRoy in the Far West Regional in 1999.

Salamanca’s Jason Wass runs after catching a pass from Mike Potter in the New York state semifinals against Delhi at the Carrier Dome in 1999.

Salamanca running back Josh Hostuttler pushes ahead for a first down against LeRoy in the Far West Regional in 1999.

(Editor’s note: This is the second in a three-part weekly series on the 1999 Salamanca football season, which culminated in the program’s first state championship game appearance.)

After showing dominance in a 40-12 playoff-opening semifinal victory over Eden, it was time for the Salamanca football team’s second rematch in as many weeks.

The 1999 Warriors, coached by Rich Morton, faced Mike Wilber’s Allegany-Limestone Gators in the Section 6 Class C championship at Ralph Wilson Stadium. Having knocked off A-L, 21-7, in Week 2, the Warriors left little doubt this time with a 38-12 triumph, even withstanding an injury to quarterback Mike Potter.

Potter threw an 86-yard touchdown pass to Jason Siafakas in the second quarter and the Warriors never trailed. His backup, Cameron Haines, shined after the injury, throwing a touchdown pass and running for two more.

Morton recalled getting a hard time from Bob Nugent, a longtime phys ed teacher and coach at Salamanca on the following Monday for his use of the spread offense.

“I get into the office and he starts giving me the business,” Morton recalled. “He’s yelling at me, ‘What are you thinking about, Morton?’ I said, ‘What Bob? We won the game.’ He said, ‘Are you crazy?’ I said, ‘What are you talking about Bob? I thought the kids played well.’ He says, ‘Never in the history of Salamanca football has there ever been an empty backfield.’”

Nevertheless, the Warriors were on to face a familiar boogeyman in LeRoy, which had ended sectional championship seasons for Salamanca in two of the previous three seasons in the Far West Regional.

BUT THAT’S when “we got the monkey off our back,” Morton said, with a 22-13 win at the University of Rochester. Trailing 13-6 entering the fourth quarter, a pair of touchdown runs by Josh Hostuttler and Chris Drugg, accompanied by two-point conversions, put the Warriors ahead for what The Press deemed “the biggest win in school history.” It was Salamanca’s first regional victory in its fourth try (preceded by 1993, ‘95 and ‘98).

“Of course the emotions were high that night,” Morton said. “I can still remember we were losing at halftime (7-6). And I remember going in, we made some adjustments, we talked to the kids, we had settled down, and I remember coming back with Josh, we gave him the ball for the go-ahead score later on in the game (14-13 after a two-point conversion).”

So the Warriors went to Syracuse for the first time in school history to play in the state semifinals. And they recorded another program-first, winning the semifinal 16-12 over Delhi at the Carrier Dome. Jason Wass’ 32-yard touchdown reception from Potter put the Warriors ahead for good, and Wass had a safety in the fourth quarter to essentially seal the game.

UNFORTUNATELY FOR these history-making Warriors, a final comeback was not in the cards for the state championship game, a week later at the Carrier Dome. In their way was Edgemont, a school from Westchester County led by bruising running back Matt Bernstein, who went on to a three-year starting career at Wisconsin.

While the Warriors outgained Edgemont, the Panthers used a rushing advantage to hang on to an early lead. Salamanca trailed 18-0 early in the second quarter and 26-6 at halftime.

“Our kids were never in that situation all year,” Morton said of trailing big. “I think the nerves got us early on and once we settled down, things went well. But we shot ourselves in the foot early on in that game.

“I was still proud at the end of the game, because at halftime we kind of called them out a little bit, ‘How are you going to react to this adversity?’ I remember telling them, ‘Take a look at what the name says on the front of that jersey, there’s a lot of pride that goes into what it says on the front of that jersey and we came here today to make sure that we were respectful of that.’”

He added: “They came back out in the second half and played their hearts out. I was very proud of them at the end of the game. Certainly it was very discouraging, it’s a hard pill to swallow after having the success that we had all year, but it is what it is. When you walk away from that, what are high school sports really supposed to be teaching kids? What’s the bigger picture in the end, right? (It’s that) they’re learning lessons in life and football is just a tool to teach them that.”

“We had momentum, the fourth quarter we were just dominating them, but it was too late,” Morton said.

MORTON NEVER experienced a loss as varsity head coach until the final game of his first season. Now the Warriors’ athletic director, tennis coach and modified wrestling coach, he takes pride in the history his team made in his first year.

“That was kind of a cool year, to say the least, especially when you come in your first year,” Morton said. “So it only can go one way after having success like that. Of course we certainly set the bar high for ourselves and subsequently the next few years we were undefeated as well. Those were fun years, they really, really were. You look back on those years with a lot of pride, a lot of good families, good parents, good support, good booster club. The administration was always very supportive of everything we did. So we were very fortunate. Obviously it was a disappointing end, but it was a fun ride that year. It was a magical year.”

Salamanca lost in the sectional final the following year to Cleveland Hill, but made it back to the state semifinal in 2001, defeating Eden and LeRoy again.

“Our success wasn’t just because we had Salamanca on the front of our jersey and people would just give up when they’re playing you,” Morton noted. “We earned everything that we got, and the reason that we had a little swag is because the kids put the kind of effort in to earn that. There was a lot of blood, sweat and tears that went into how they did what they did to earn all the wins they got. It wasn’t just handed to them.”

Driving for 6: With Manning and Betts in the clear, a close look at the Huskers' WR room

A mix of clouds and sun. A stray shower or thunderstorm is possible. High 82F. Winds light and variable.

A few clouds. A stray shower or thunderstorm is possible. Low 61F. Winds WSW at 5 to 10 mph.