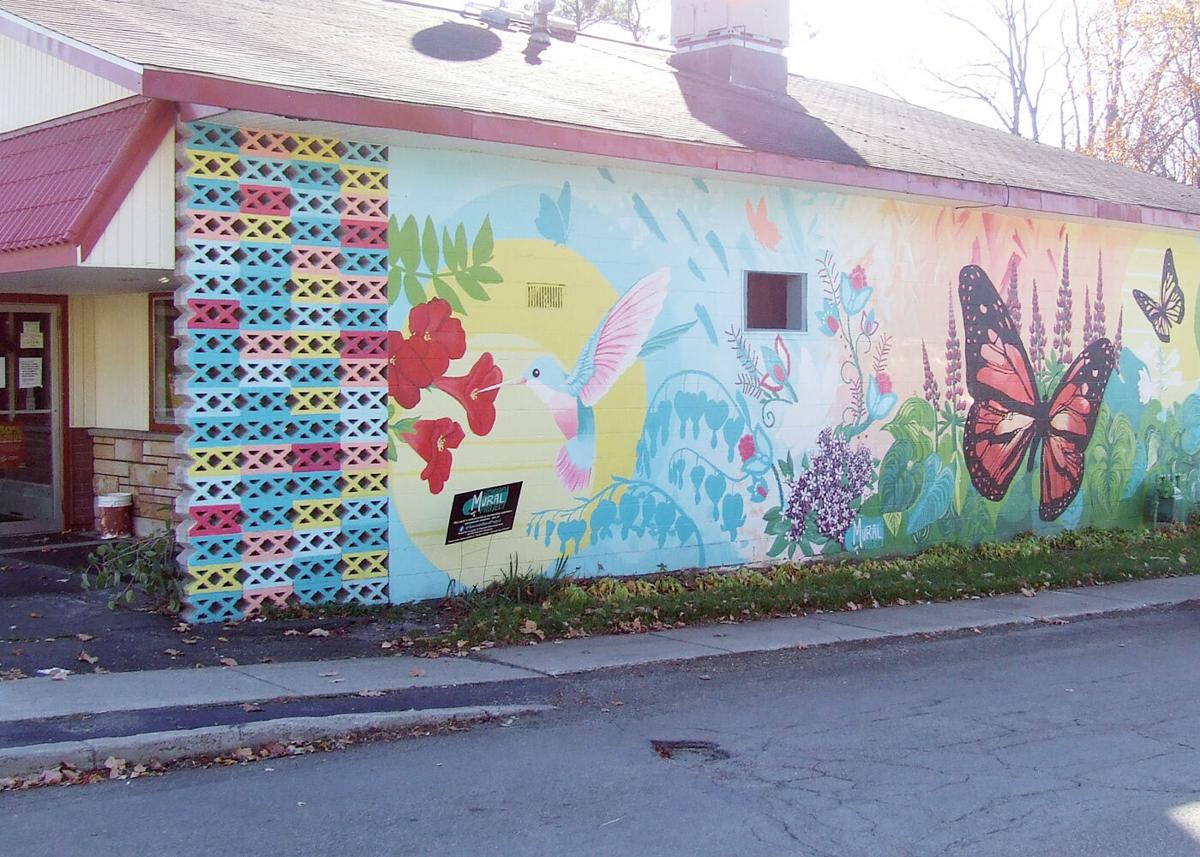 A mural planned for an outside wall of the Palm Gardens building in Gowanda. 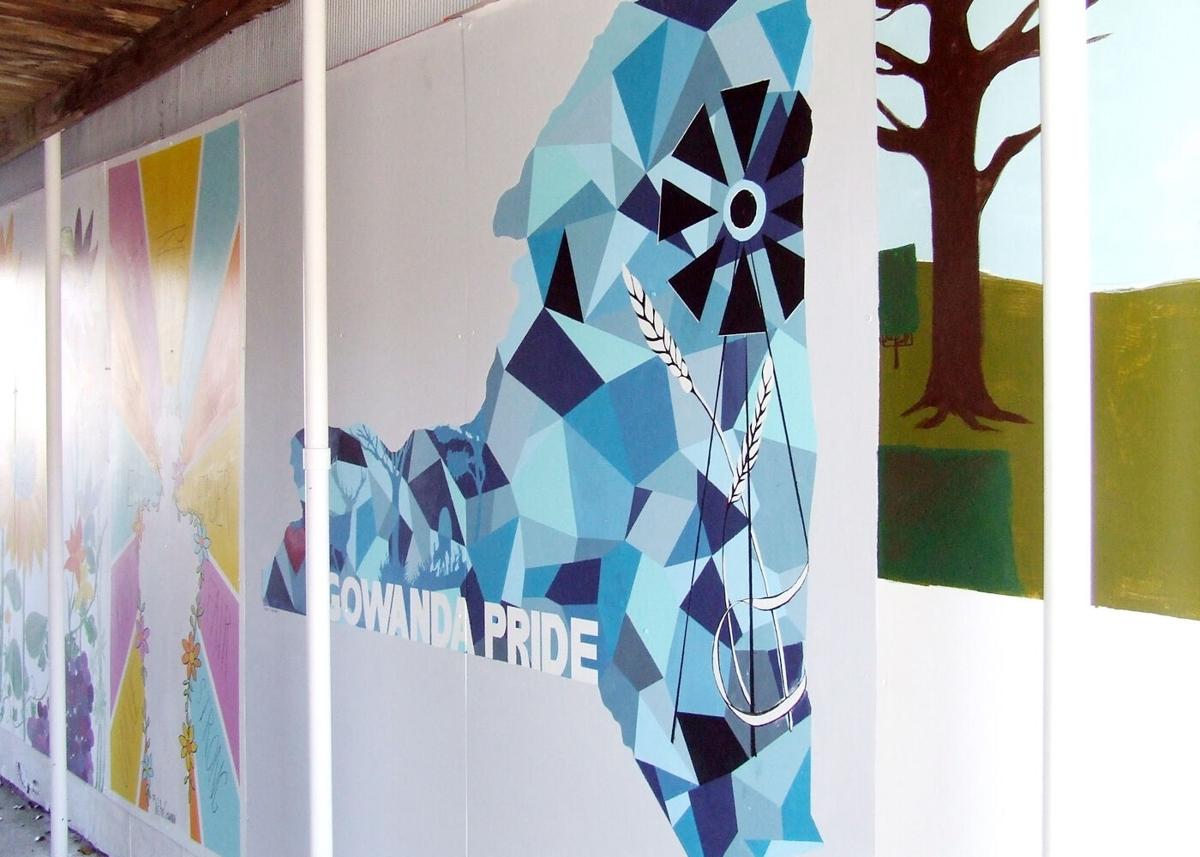 The Hager’s Alley murals painted this summer in Gowanda.

A mural planned for an outside wall of the Palm Gardens building in Gowanda.

The Hager’s Alley murals painted this summer in Gowanda.

GOWANDA — From early in 2020, a group of community volunteers formed the Gowanda Community Clean Up Group. Eventually numbering more than 100, members of the group were often seen cleaning up the Gowanda downtown area and local parks. It was not long before their attention turned to the Aldrich Street bridge.

The bridge is one of the primary spans crossing the Cattaraugus Creek in Gowanda. At the south end of the bridge there is an access road that has made it a favorite place for the fishermen.

The area has also had a long history as a “party spot.” For decades the concrete bridge support at that end of the bridge has been a site for an abundance of inappropriate graffiti. At least once in the past, the writing has been blotted over with spots of white paint.

When the Gowanda Community Clean Up Group set their sights on the problem, the solution got an upgrade. With such a large group, it was inevitable that there would be a number of artistic individuals there. They moved beyond just writing out the markings. They covered them over with a large painting of a steelhead trout dubbed Francine.

One of the artists involved in that work was Gowanda High School art teacher Heather Rydzik. That initial artwork sparked the idea of beautifying other spots in the village with murals. On June 10, Rydzik from the Gowanda Mural Project in a Facebook group.

Together with Krissy Bartholomew Smith and Amelia Dye Jarzynski, the group would bring together other local artists of various skill levels to paint murals at selected sites in Gowanda. Before the painting projects got underway, there was an initial chalk art display done on the sidewalk in front of Jesse’s Gifts and More, which is in-part run by Jarzynski.

The first mural to be done was started on June 20 on the east exterior wall of a hair salon run by Alison Connolly. The building, being right on the main square in downtown Gowanda, provides a great view of the simple floral design to traffic entering the Business District from the bridge in the center of Gowanda.

A Community Paint Project event on July 25 invited individuals to sign up for time slots to work on a mural planned for an outside wall of the Palm Gardens building. A second phase of the paint project took place Aug. 8. In the end, a floral scene with giant butterflies and a large hummingbird was completed Aug. 19.

That was followed up with the Gowanda Mural Project Kids Edition beginning the next day. Attention was turned to the jersey barriers separating the back of the Shop’N Save parking lot from the Cattaraugus Creek.

For the first phase of this project solid colors were painted. Eventually, some hills and stick figures would be added with many of the design ideas coming from local children. The project was completed in mid-October.

One other area worked on during the summer and fall of 2020 was the Hager’s Alley Murals, which runs between Main Street and the large parking lot behind the north-side stores next to Hager’s Flowers and Gifts.

On July 30, Erin Tyler began organizing the project where artists could sign up to do a mural on one of eight sections of alley wall ranging from 4 foot square to 12 feet by 8 feet. Each artist would design their own creation, which resulted in a diverse collection of works.

One interesting story belongs to Leann Marie, a 2006 graduate of Gowanda High School who traveled across the country to take part in the project.

“Living in California now, I rarely get to bring my own son home to visit,” she said.

Leann and her family stayed with one of the mural project group members during her stay in town. Her design is a large monochromatic piece in the shape of New York state and the Gowanda school colors of blue and white. It includes many of the images the artist remembered from growing up in Gowanda and her school experience.

The Gowanda Mural Project gained a great deal of popularity as it progressed and many building owners have come forward hoping to be included.

“Our mural line-up for the mural project is full for 2021, we already have about a dozen locations on our what's next list,” Rydzik said to one owner. “We're happy to add your building to our list, just know that we probably won't get to it for, it's crazy to say but 4 or 5 years”.