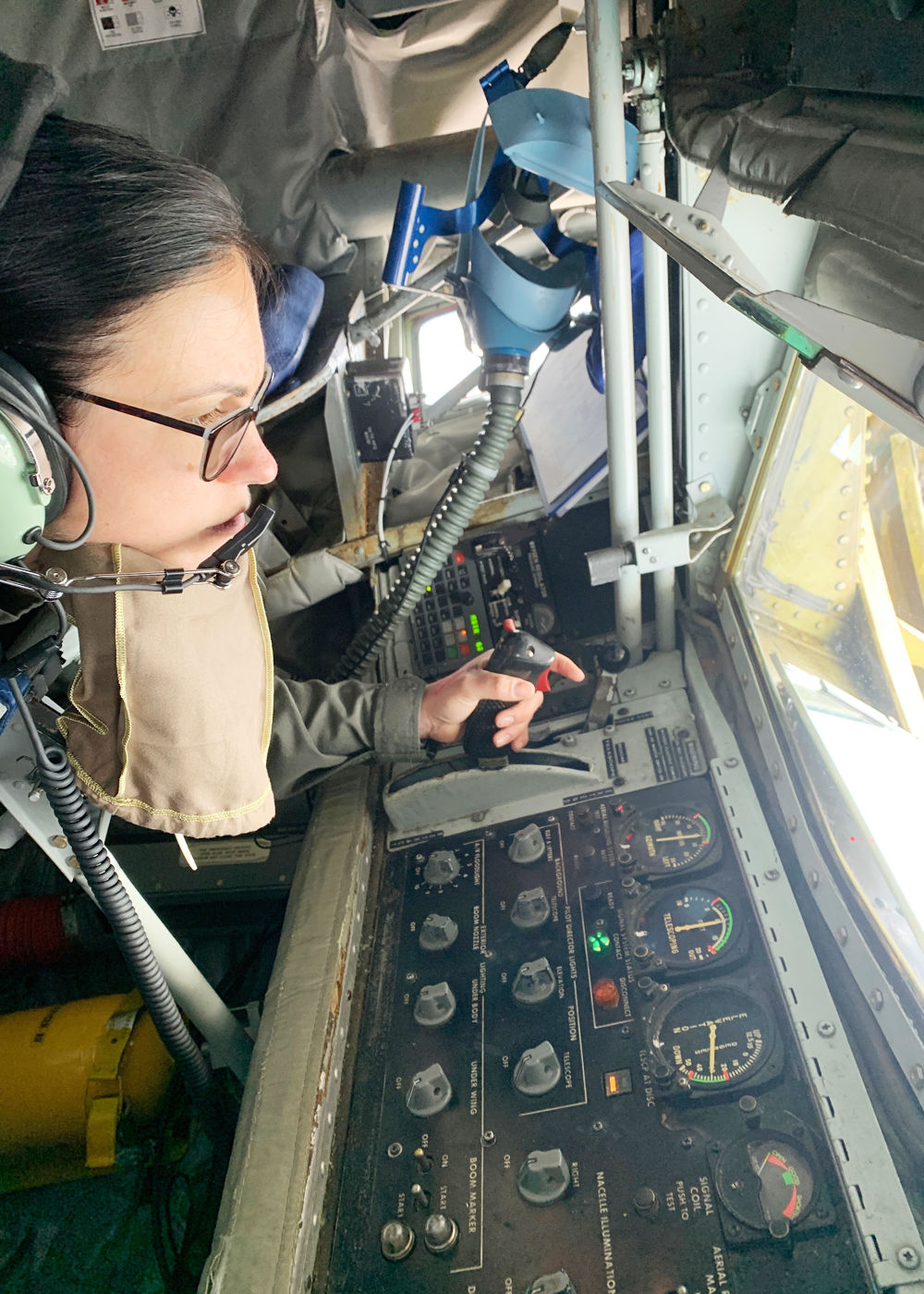 SSgt. Danielle Bigaj is shown sitting in the pod in the rear of a KC-135 tanker aircraft from where she operates the refueling boom with great precision. 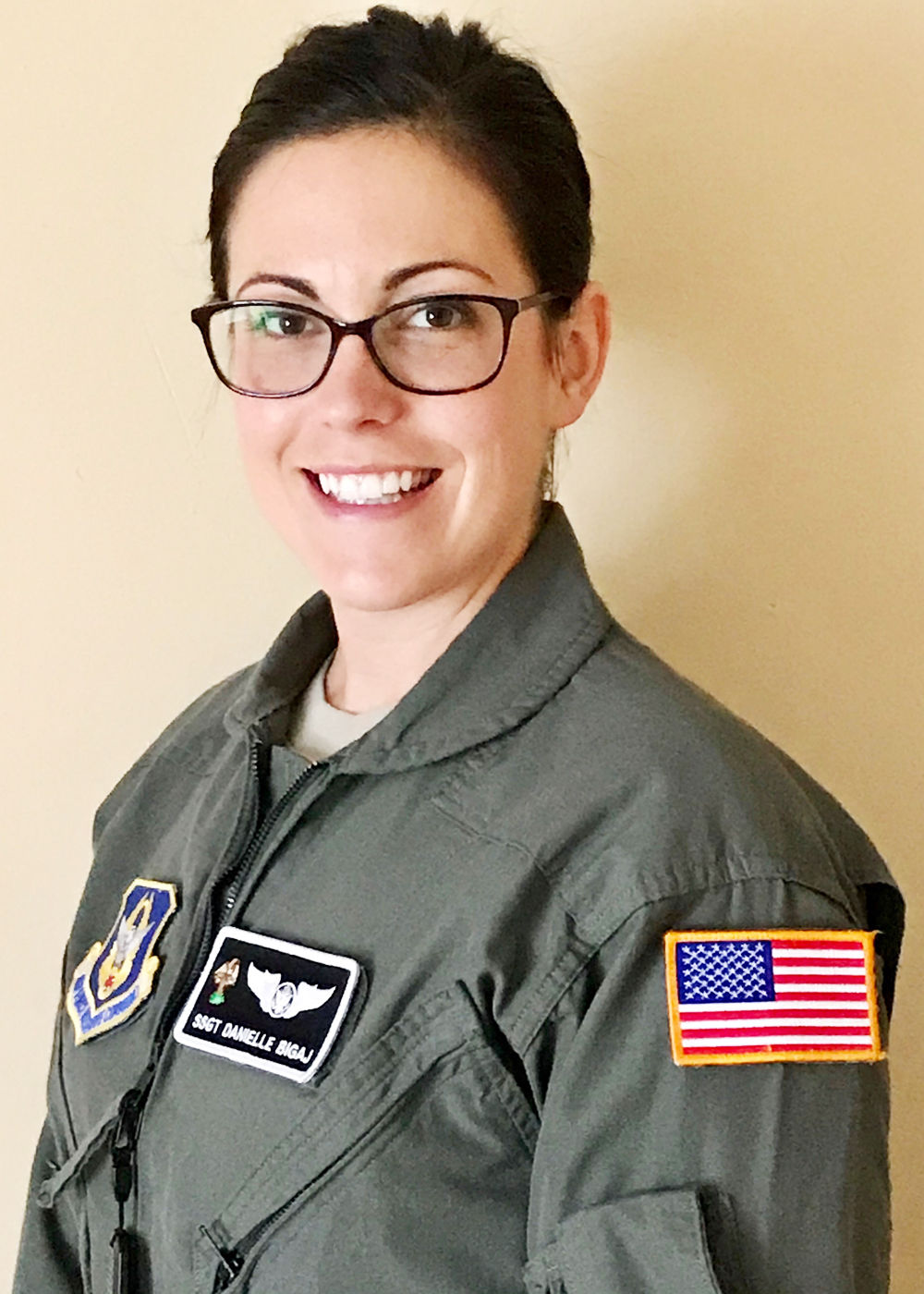 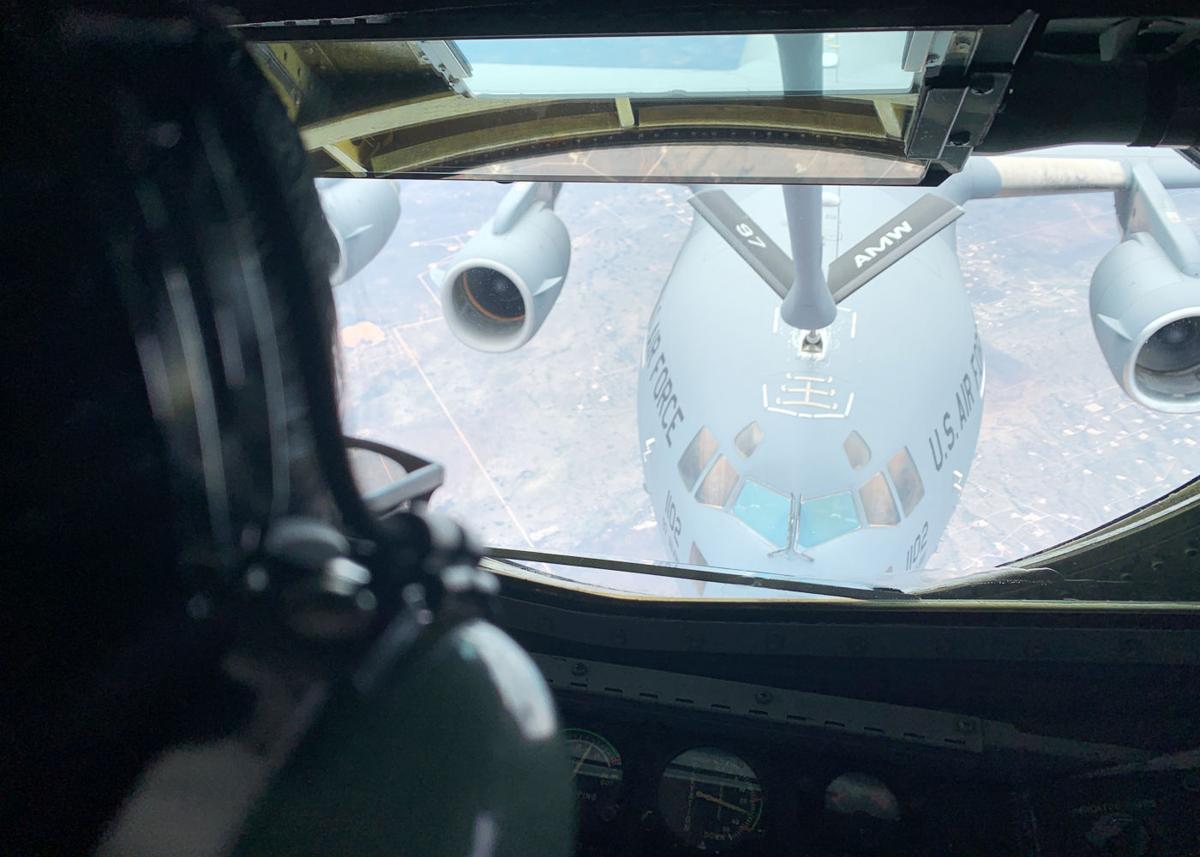 This photo shows a view from the pod located in the rear of the plane under the telescoping boom. While in mid-air, SSgt. Bigaj maneuvers the refueling boom into the fuel receptacle of another aircraft.

SSgt. Danielle Bigaj is shown sitting in the pod in the rear of a KC-135 tanker aircraft from where she operates the refueling boom with great precision.

This photo shows a view from the pod located in the rear of the plane under the telescoping boom. While in mid-air, SSgt. Bigaj maneuvers the refueling boom into the fuel receptacle of another aircraft.

NIAGARA FALLS — Serving her country in the United States Air Force Reserve Command (AFRC) is a choice Staff Sergeant (SSgt.) Danielle Bigaj has never regretted. Being a Citizen Airman of the 914th Air Refueling Wing at Niagara Falls Air Reserve Station has opened up an exciting military career for her.

SSgt. Bigaj, who is attached to the 328th Air Refueling Squadron (ARS) within the 914th has recently completed six months of extensive and challenging training to become an inflight refueling specialist, called a “boom operator.”

As she serves her country, the 32-year-old is setting a good example for other young people. Her proud father, Gary Hydock of Salamanca, said his daughter has an appetite to pursue and be challenged, which is evident in her new position refueling planes in flight. He said any expectations he had for his daughter have been far exceeded.

To become proficient in operating in a boom pod, Bigaj spent two months practicing in an inflight training simulator. Her final step was to take everything she had learned and perform in an actual refueling aircraft.

“Then you do a ‘check ride’ which is your final blessing from your instructor,” she said. “They pin a patch on you, give you your coin and congratulations. Then you’re off to the ‘wild blue yonder’ to continue being a boom.”

Bigaj has returned to her duty station in Niagara Falls where she’s been flying high in a KC-135 tanker aircraft refueling other military planes for about two months.

“The KC-135 tanker is a mid-air refueling aircraft with a hydraulically-powered, telescoping ‘flying boom’ (tube) located on the rear of the plane. We fly the boom into the receptacle of the receiver aircraft to transfer fuel in mid-air,” she said.

According to Bigaj, the boom has two fins on the end called ruddervators that enable the operator to actually fly the boom into the receptacle of the other plane. The inner part of the boom is also extendable and acts as a shock absorber during refueling.

“A ruddervator stick in the pod is used to fly this ‘boom’ around. We have another joystick that controls the extension and retraction — depending on how far away or close the receiver plane is,” she said. “Once we fly that into the hole, we call it ‘a contact.’ When we make contact, it creates a pumping condition that allows us to transfer fuel.”

Chief Wolfe said the boom operator in a KC-135 lays prone (on their belly) in a pod and looks out the back window of the plane at the aircraft below as they guide the boom insert into a receptacle on the receiving aircraft.

“Flying airplanes in close proximity is a dangerous operation,” he said. “When refueling, we’re 30 to 35 feet from the other airplane and doing anywhere from 200 to over 300 miles an hour.”

Although SSgt. Bigaj has not worked for Chief Wolfe as a boom operator, yet, he has great confidence in her because he has seen her conscientious work in her previous job as an Aircrew Flight Equipment Craftsman.

“That’s why we hired her for a boom operator position and sent her to school,” he said. “We have a pretty extensive interview board that we do when we hire folks. If people don’t pass that, they don’t have the chance to go to school.”

Wolfe said because Bigaj was a non-flyer, all six months of training were required for her to become a boom operator. He said the schools built her up to be highly-qualified and proficient.

“Every report I’ve gotten back from the schools said she did an excellent job. She’s a hard-charger who takes things up rather quickly and has succeeded rather well at school,” he said.

According to Wolfe, there are currently 22 members in the boom section of the 328th ARS, and Bigaj is one of four women.

Prior to her new position as boom operator, Bigaj was an Aircrew Flight Equipment Craftsman for nine years, which is an operations support position in ground personnel. She said the Niagara Falls base had C-130 planes before they got the KC-135s and she used to work on the C-130. She cross-trained into the aircrew position of boom operator, which is known by many to be one of the best enlisted jobs the Air Force can offer.

Bigaj said many skills from her civilian job have been transferrable to her military job. She has joy sticks and gauges she has to carefully watch on both the heavy equipment at the highway department and on the control panel in the boom pod of the KC-135. She said it takes a steady, fluent hand and she’s in control up there.

“I feel comfortable in the pod with the joy sticks and gauges, and having movement beneath me that I’m ultimately in control of,” she said. “Whether it’s construction, digging a hole or ripping up a road, I need the same steady hand operating the boom.”

Bigaj received her associates degree from Erie Community College and decided to join the Air Force Reserves, in January 2011, while attending the State University of New York at Buffalo State College.

“I was still going to school at Buff State and (the reserves) was more convenient for me to remain in the lifestyle that I had in place, rather than just pick up and leave,” she said. “The reserves have also helped me pay for some of my schooling.”

According to Bigaj, the Air Force Reserves can have great retainability for its members. She said the military organization takes care of its people and finds a place where they do well. If a member is unhappy in their job position, they have the option to cross-train into another position. She said people who stay in the reserves can make it a career.

“I’m a prime example of how the Air Force can take care of you, if you are willing. I was lucky to become a boom operator. It’s probably the best job I can get,” she said.

“Her attitude is ‘it’s there to get,’” her father said. “Danielle spent some time thinking about what to do, then ‘did it’ while serving the best country in the world.”

Bigaj and her husband, Daniel, live in Holland, N.Y. She’s the daughter of Hydock, of Salamanca, and Doreen Mazurowski, of Boston, N.Y. Her brother, David Hydock, lives in Boise, Idaho.

A mix of clouds and sun. A stray shower or thunderstorm is possible. High 82F. Winds light and variable.

Some clouds. A stray shower or thunderstorm is possible. Low 61F. Winds WSW at 5 to 10 mph.

Some clouds in the morning will give way to mainly sunny skies for the afternoon. High 73F. Winds WNW at 10 to 15 mph.