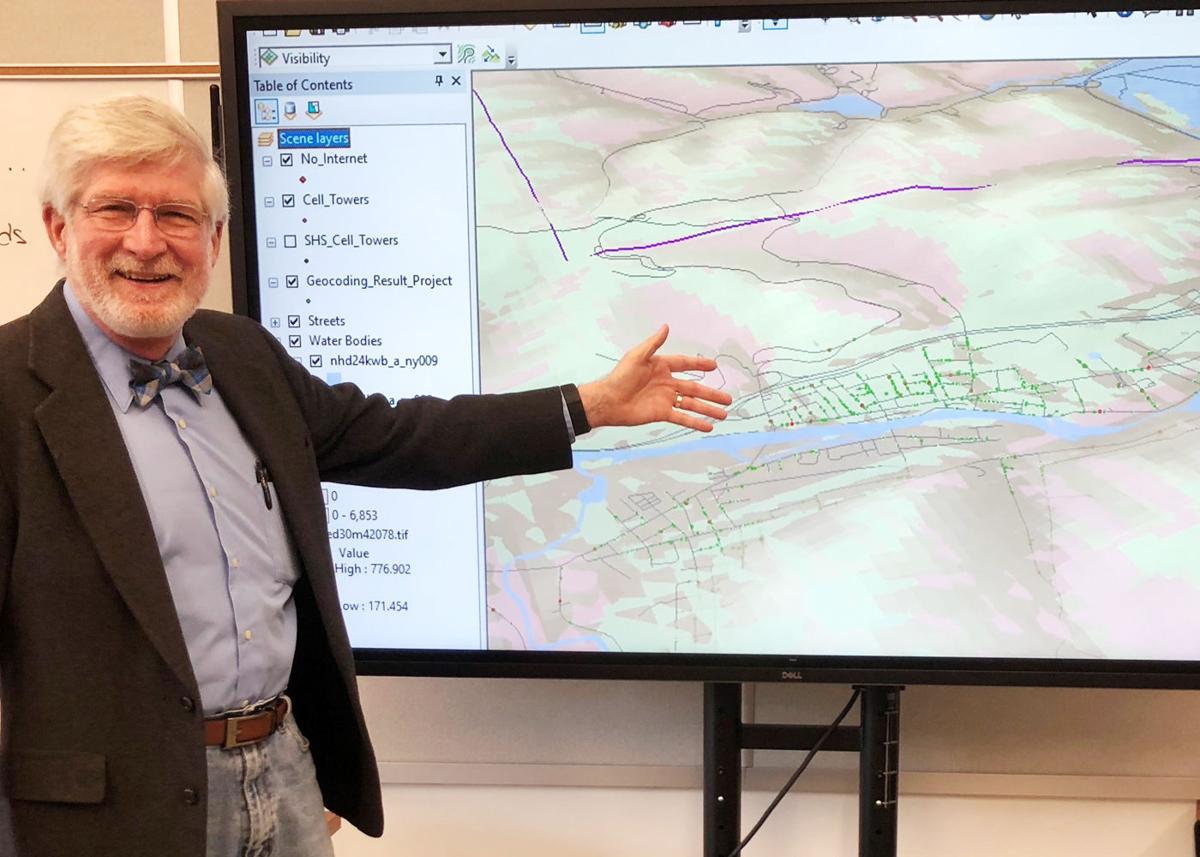 Dr. Graham Hayes shows his GIS map of the city of Salamanca with locations of students with and without internet access. 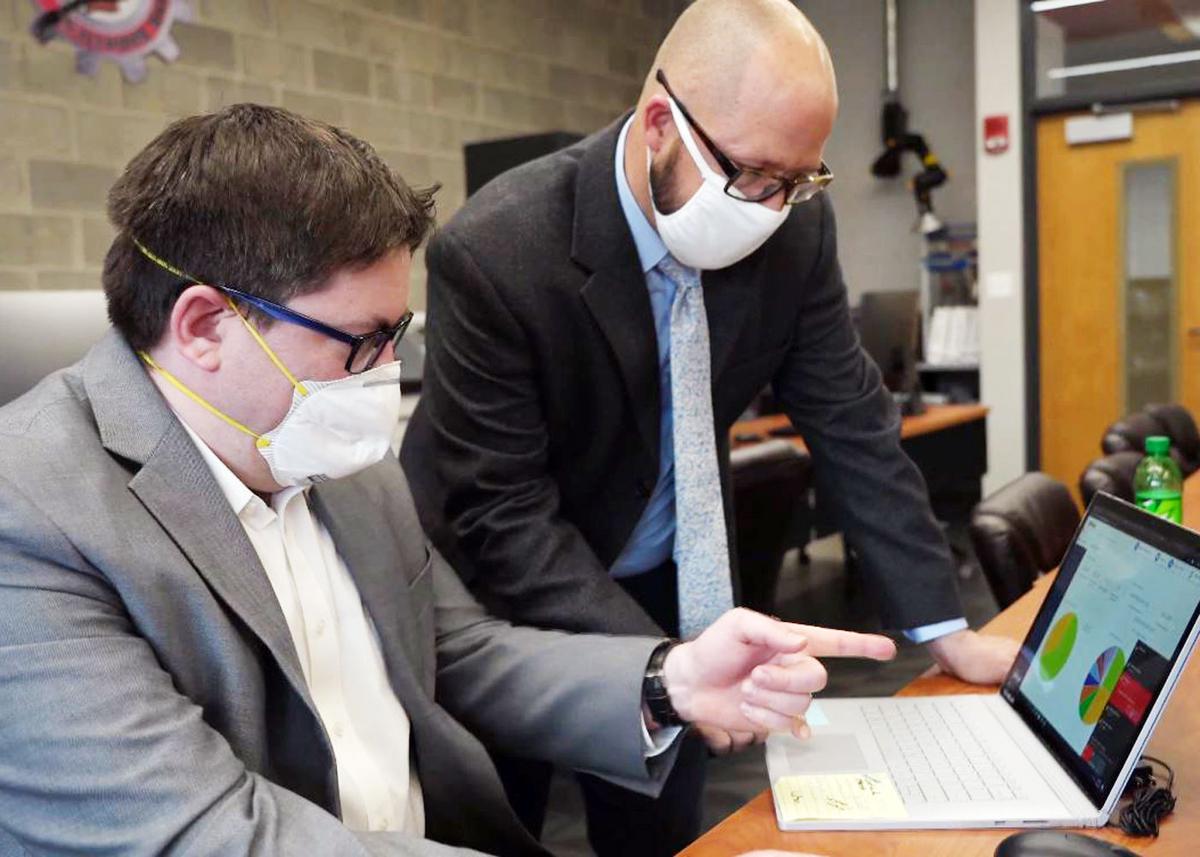 Dr. Graham Hayes shows his GIS map of the city of Salamanca with locations of students with and without internet access.

The concept of using GIS mapping to help prioritize the delivery of home internet to students first occurred to Hayes in 2019 when he realized that a substantial number of his Earth Science students did not have internet access at home.

“Salamanca High School provides a laptop for every student. However, I quickly learned that many students do not take them home,” Hayes said. “When I inquired why, I found that most rural students do not have access to broadband cable at their house so the laptop’s usefulness to students in the home setting was greatly mitigated.”

Hayes, who also consulted for the Seneca Nation in 2011 as a Research Scientist with UB’s Geography Department to help assess soil erosion and water quality issues near the Cattaraugus Creek watershed, saw an opportunity to apply his unique background in information systems to meet the problem in a creative way.

“Geographic Information Systems (GIS) technology works by linking digital map layers (geography) with information from different database tables. The combined data allows questions to be asked of the database and the results are displayed or highlighted on the map,” said Hayes, likening the system to the layers of an onion, in which each layer represents a different data category.

“For example, geology, terrain, streams, land use, parcels, streets, buildings, utilities, etc. can all be displayed as overlays,” he explained. “The resulting maps reveal the spatial relationships of the different datasets or other related information. In our case, we used GIS to pinpoint which households needed internet assistance.”

To that end, Hayes asked Salamanca City Central School District for sanitized student address data, where all personally identifying information such as first and last name were removed, so he could begin to map the digital discrepancies that are common in rural school districts.

“The student’s addresses were geocoded, which means they were loaded into the map to produce visual data points, or markers on the maps,” he said. “The process overlays the grid on the address points so we can identify clusters of imperial need.”

To sort through the complexity of the data, Salamanca schools used Esri’s ArcGIS, a leading industry mapping and spatial analytic software. The software was acquired by the school through an education license for Hayes’ fall 2020 GIS class.

According to Salamanca’s STEAM Coordinator Aaron Straus, the Esri Education Package allows their department to install the software on up to 500 student laptops.

“We downloaded 30m Digital Elevation Data (DEM) from the USDA Data Gateway data portal and cell tower data from ArcGIS Online,” he said. “This allowed us to add an extra layer that displayed students’ houses in proximity to cell phone towers.”

The first layer of the map allowed Hayes to visually represent the coordinates, which were broken down by grid or household area. Hayes added a second layer to identify which homes, without internet and out of the city’s populated area, could receive cellular signals.

“We then applied a 3D modeling technique within ArcGIS Spatial Analyst called viewshed analysis,” he said. “This is a method where cell tower locations and heights were placed into the model along with the DEM data. The analysis created a data layer where each area on the map was tagged red or green based on whether that grid cell was visible from all surrounding cell towers.”

As the project’s scope increased, Hayes invited Straus and Robert Miller, the district’s director of technology, to help further extend the pragmatic side of the project. Together, the trio worked with district officials to coordinate the purchase and dissemination of 90 Kajeet 4G Wi-Fi devices, which were distributed to remote Salamanca families who lacked a direct cable run.

Hayes completed his home internet map projects in April with great success. According to Hayes, the school district immediately put him to work on other district logistical projects which he gleefully accepted.

“When Dr. Hayes initially approached us, I was happy to give him the tools he needed to be successful on the project,” said assistant superintendent Dr. Mark Beehler. “When he presented the results, I was utterly amazed at the scope of applications for GIS for our district.”

Salamanca schools asked Hayes to create GIS maps for distributing teacher appreciation gifts for dispersed faculty. Thanks to GIS technology, Hayes was able to grid the location of teachers, relative to the schools, who are spread across five different counties and two different states.

District officials state that Hayes’ use of technology to help those in need is part of what makes STEAM education so unique.

“We're in the middle of a pandemic,” said Straus. “But in it, is an opportunity to model the role of STEAM engineering as a benefit to society and likewise find innovative ways to still deliver quality instruction remotely, over the web.”

Said Beehler, “Hayes exemplified the spirit of STEAM in his actions and his time.”