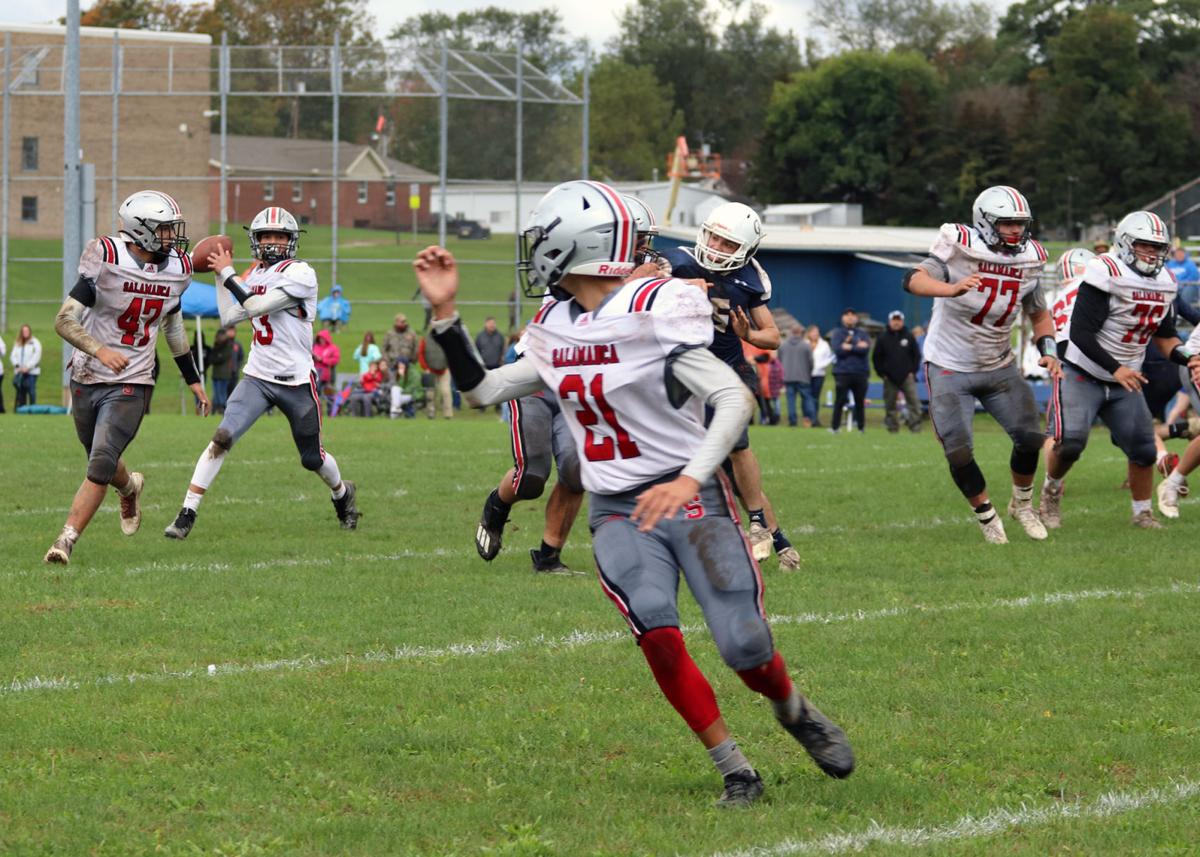 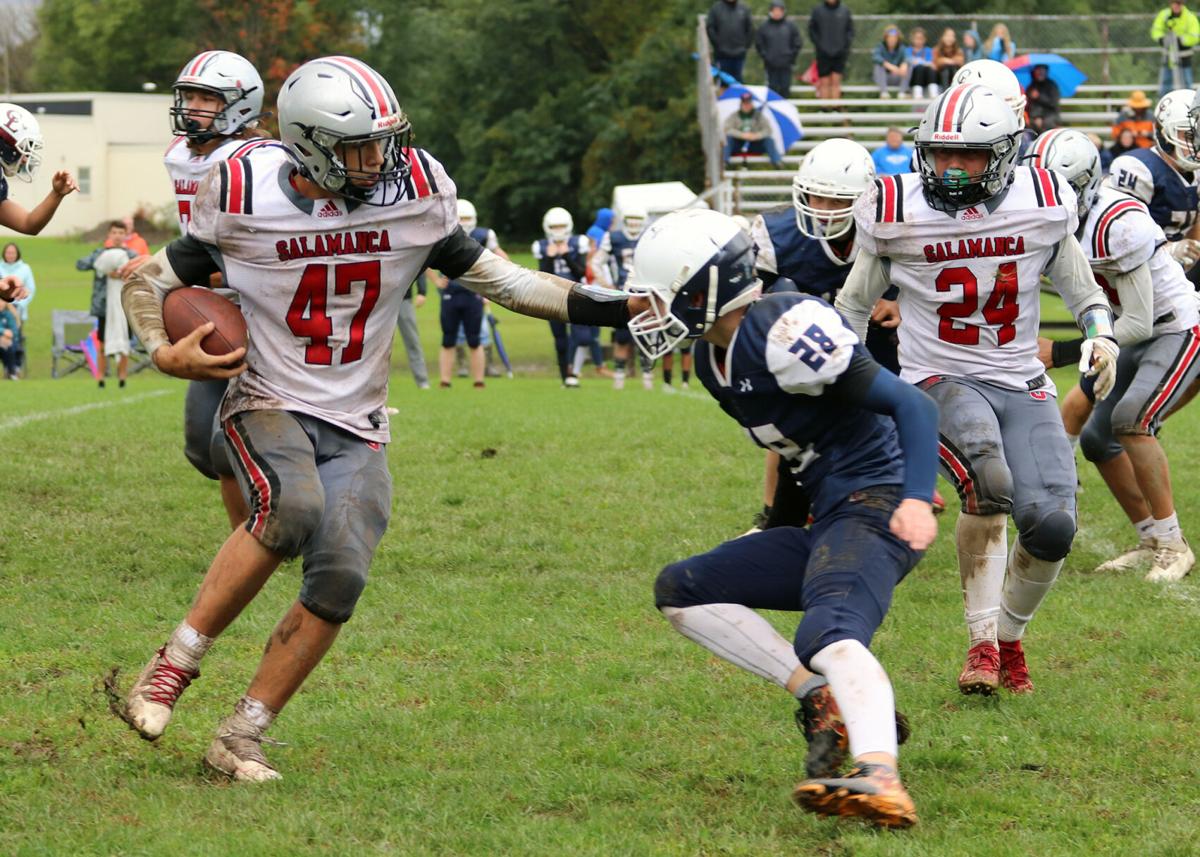 Salamanca's Jesse Stahlman (47) looks to get around a Chautauqua Lake/Westfield/Brocton defender. 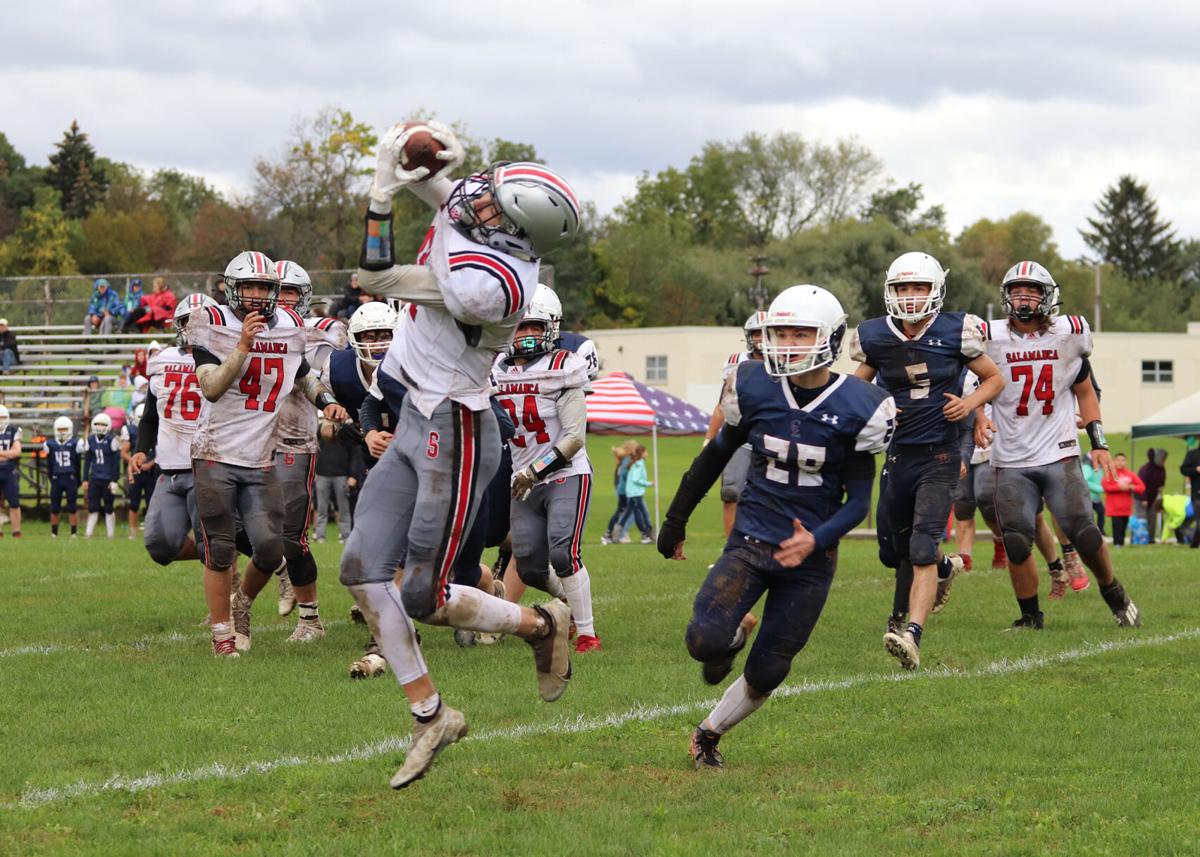 Salamanca's Cole Hedlund pulls in a catch on Saturday in Westfield.

Salamanca's Jesse Stahlman (47) looks to get around a Chautauqua Lake/Westfield/Brocton defender.

Salamanca's Cole Hedlund pulls in a catch on Saturday in Westfield.

WESTFIELD — A rain-soaked muddy field played right into the strengths of the Salamanca football team:

A big offensive line and a bruising running back.

Junior tailback Jesse Stahlman continued his streak of 100-yard efforts, notching one in all seven games this year, tallying 121 yards and three touchdowns on 22 carries in a 32-0 Class C South victory over Chautauqua Lake/Westfield/Brocton on Saturday.

“The game kind of slowed down a little bit but we were able to control the line of scrimmage and do some really good things on both sides of the ball,” Salamanca coach Chad Bartoszek said of the wet conditions. “Our defense played really well, only giving up one long run.”

Bartoszek said after a Tuesday win at Falconer/Cassadaga Valley/Maple Grove his team’s offense needed to “evolve” a bit to combat opponents loading up to stop the run. But the Warriors didn’t need to pass much on Saturday.

“We're built for that weather,” Bartoszek said. “The size of our team is beneficial when we've got to get through some things like that.

Starting senior quarterback Hayden Hoag sustained an ankle injury on the game’s first drive, pushing freshman Maddox Isaac into play for most of the afternoon. Isaac went 5-of-11 passing for 93 yards and also had a touchdown run. Harley Hoag made two catches for 49 yards.

“(Maddox) stepped in and did well for us,” Bartoszek said. “We were able to throw it a little bit, but the wind picked up here and there and it got a little sloppy.”

Shawn Pierce grabbed an interception to set up a Salamanca touchdown before halftime, returning the pick 14 yards to the CL/W/B 13-yard-line. Stahlman punched in the run for a three-score lead, 24-0, at halftime.

Salamanca completed a stretch of three games in eight days, due to a rescheduled game on Tuesday in Falconer, at 3-0. The Warriors found the energy to finish another win on short rest.

“It was tough. Even today, we had a whole bunch of energy early,” Bartoszek said. “The kids seemed like they were all-in and you could just feel them towards the second half … they still looked a little fatigued. It's a tough turnaround. But having a change of weather actually sometimes kind of gets the kids excited, it's more fun to play in the mud and the rain. It is going to be something we look back on, three games in eight days that's quick, so we're already to the last game of the season, which is hard to believe.”

At 6-1 (4-1 league), the Warriors will look to seal a high playoff seed in a Week 8 trip to Gowanda/Pine Valley. The Section 6 Class C playoffs will draw eight teams from three divisions, with the division winners and runners-up guaranteed a spot, but only two of three third-place teams making the bracket using a seeding criteria based on league results.

“Gowanda's getting healthier and we need to finish off our season for us to make the playoffs and build that momentum into the playoffs,” Bartoszek said. “So it's going to be a big week.”