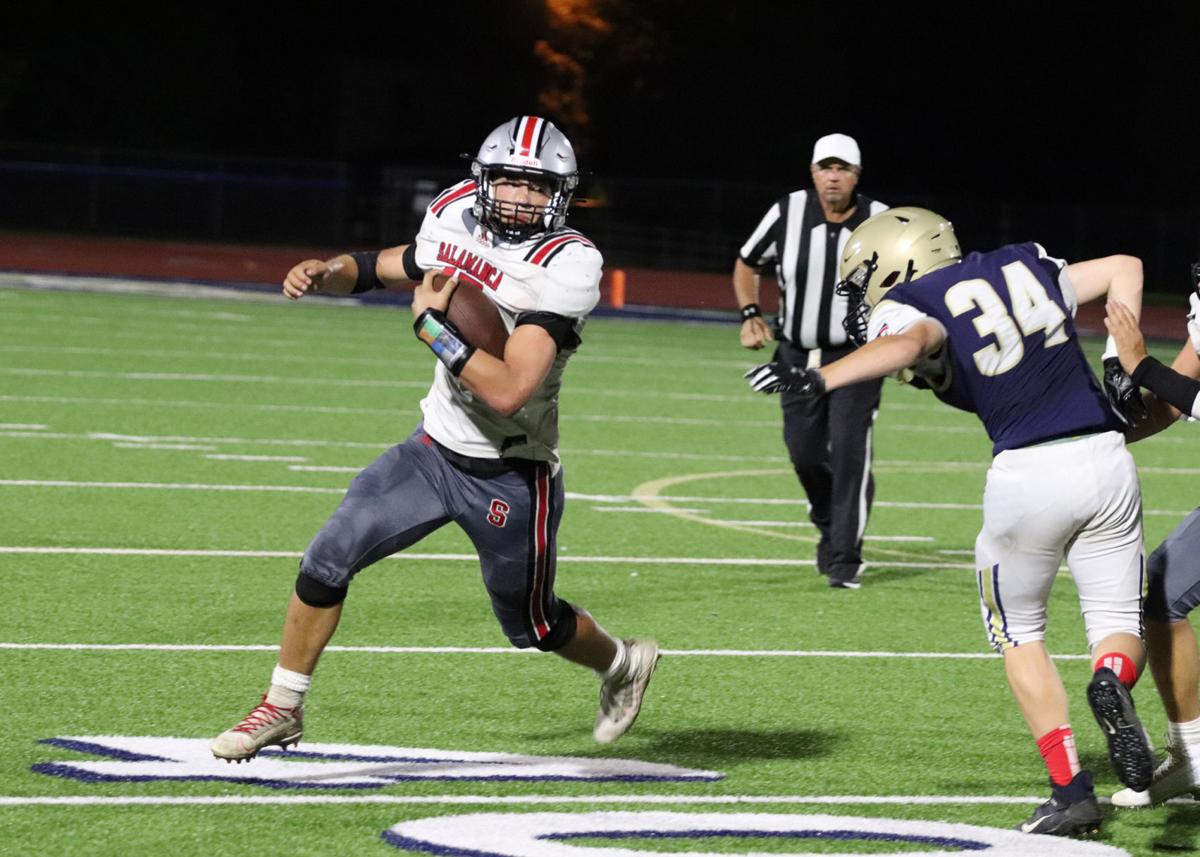 Salamanca running back Jesse Stahlman (47) looks for room around the edge to run against Falconer/Cassadaga Valley/Maple Grove in a Section 6 Class C South game Tuesday night in Falconer. 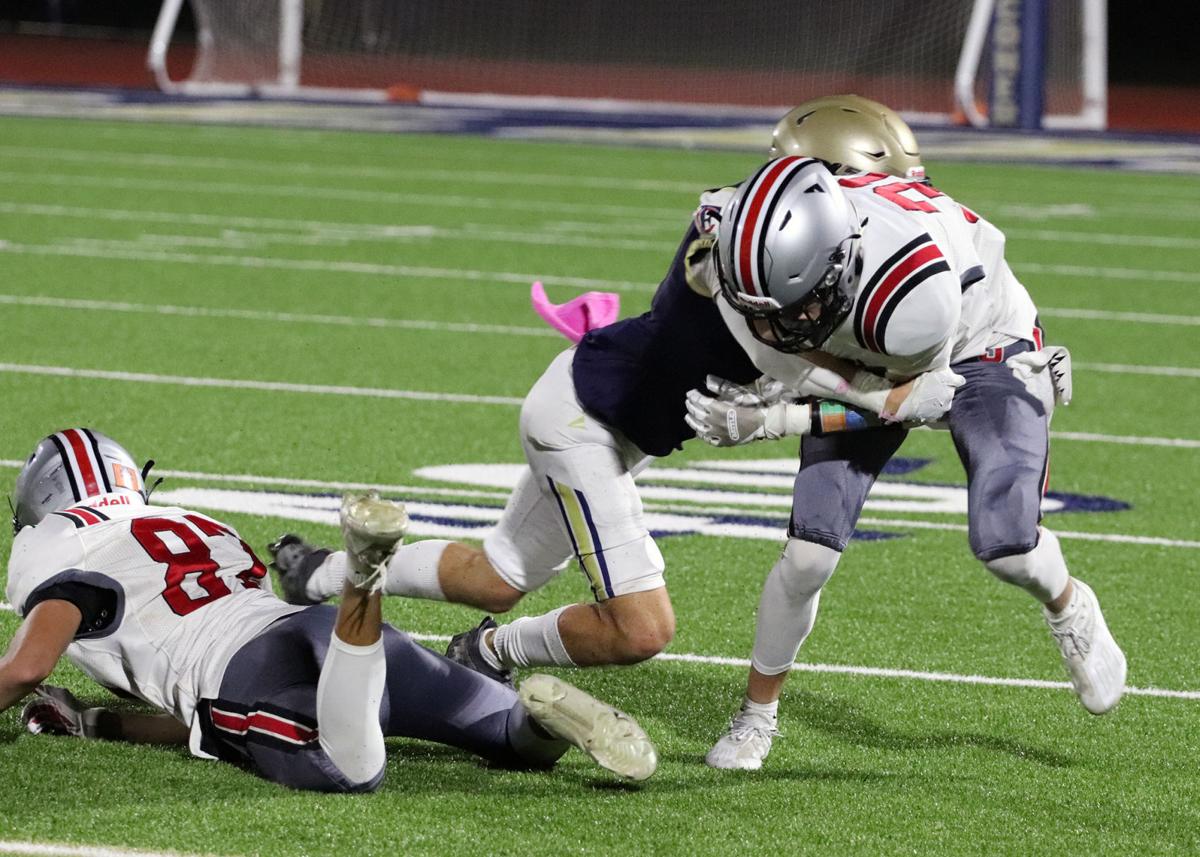 Salamanca’s Cole Hedlund (31) hangs on for a catch against Falconer/Cassadaga Valley/Maple Grove in a Section 6 Class C South game Tuesday night in Falconer. 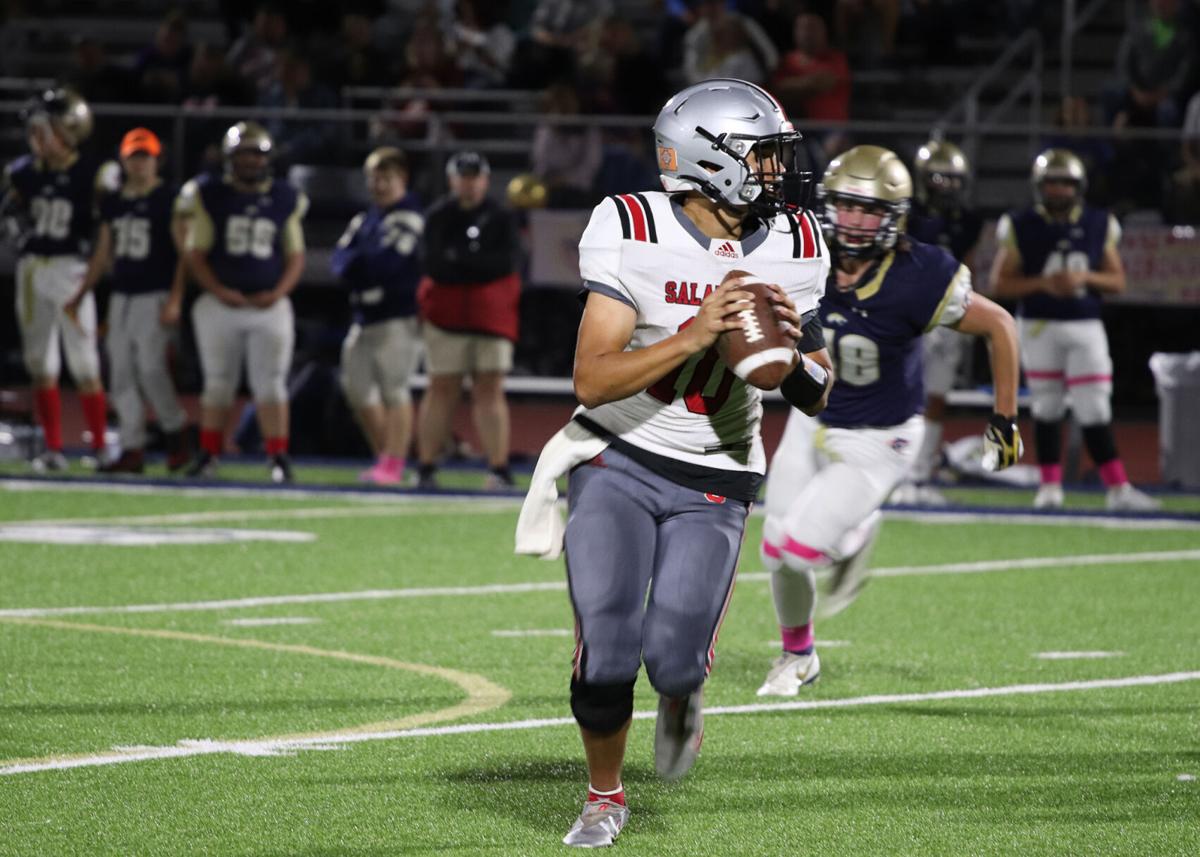 Salamanca's Hayden Hoag looks down field for a target against Falconer/Cassadaga Valley/Maple Grove on Tuesday in Falconer.

Salamanca running back Jesse Stahlman (47) looks for room around the edge to run against Falconer/Cassadaga Valley/Maple Grove in a Section 6 Class C South game Tuesday night in Falconer.

Salamanca’s Cole Hedlund (31) hangs on for a catch against Falconer/Cassadaga Valley/Maple Grove in a Section 6 Class C South game Tuesday night in Falconer.

Salamanca's Hayden Hoag looks down field for a target against Falconer/Cassadaga Valley/Maple Grove on Tuesday in Falconer.

FALCONER — With two fourth-quarter touchdown passes, the Salamanca football team rallied to win its second game in five days on Tuesday and put itself on a path to a high playoff seed.

For those two touchdowns, the Warriors drove on shorter fields than the Warriors had faced most of the night. Salamanca initially went three-and-out after F/CV/MG’s mid-third quarter touchdown, but a strong punt from Archer Newark helped turn the field position in his team’s favor. Salamanca forced a stop and scored on finished its next drive on a fourth-and-goal, seven-yard pass from senior quarterback Hayden Hoag to his twin brother, tight end Harley Hoag, for a touchdown.

The Salamanca defense produced another stop and allowed the Warriors a chance to score again with a 31-yard play-action pass from Hayden Hoag that was initially tipped in the end zone by a teammate into the hands of senior wide receiver Cole Hedlund.

“(It was) nothing flashy but we needed to execute in the pass game because they had so many guys up (front) and they had a great gameplan,” Warriors coach Chad Bartoszek said. “Their guys really played a heck of a game. So it really wasn't pretty at all but really a well-fought, well-deserved win against a really tough opponent.”

This was Salamanca’s third fourth-quarter go-ahead drive since the spring, when it took a 6-0 win at Portville in the last minutes of a Class D semifinal. Then in Week 2 of the fall, the Warriors knocked off Southwestern on a touchdown and two-point conversion in the final seconds to win 14-13.

“I think our kids kind of learned a little bit about themselves and maybe a little bit about the game because this is the second or third time that we've kind of battled back in the last six months or so,” Bartoszek said. “It's not easy being that kind of team, it's hard, but I think if you can win those type of games it opens up the door to be competitive in every game.”

Hedlund, who made three catches for 40 yards, grabbed an interception after his go-ahead touchdown on F/CV/MG’s final drive.

The Warriors (5-1, 3-1) ran out the clock thanks to hard running from Jesse Stahlman. Stahlman finished with 146 yards on 26 carries, including 95 yards in the second half.

“We just pounded (it), Jesse was able to drag some guys down the field on a few carries,” Bartoszek said. “We ran it down to about their 10 and we just ended up taking a knee.”

Hayden Hoag went 9-for-14 through the air for 85 yards and two scores.

The latest win keeps Salamanca one game clear of Southwestern (2-2 C South) for second in the division. The top two seeds in the division earn home playoff first-round games in the Section 6 Class C playoffs.

Salamanca’s lone points in the first half, despite 116-102 advantage in yards, came on a field goal from Archer Newark. Bartoszek said the sophomore started to find his kicking range in practice last week.

“Last year on the JVs they were telling me how well he could kick and punt and then this year the pop wasn't there and he found it last week sometime during practice and we were like, ‘holy cow, he's kicking that thing again,’” Bartoszek said. “I hope he keeps continuing because he can be a real weapon for us with the way he can kick and punt and we added a field goal this year, we haven't called a field goal in a long time. So that was a huge part of the game obviously and he's been putting in a lot of work and I was proud that he got to show it off a little bit today.”

The Warriors are set to visit Westfield Saturday afternoon (1 p.m.) to play Chautauqua Lake/Westfield/Brocton. They then would play Gowanda/Pine Valley Friday, Oct. 22, to close out the regular season.

“I'm a little concerned about playing another one on Saturday,” Bartoszek said. “This is a tough stretch, three games in eight days is not ideal, I don't know if it's a very health-minded decision but it is something that we're going to have to overcome. We looked a little tired today but that's a part of times we're living in. So we're going to focus just on our bodies the next three days and get ourselves physically ready to get another game Saturday morning. So all the schematics, the game-planning, a lot of that stuff's already in, it's just little tweaks.

“We've just got to go out and execute. We've got to kind of evolve to a place where if a team's going to take away our run game, we've got to be able to throw it. I know we've had success throwing it throughout the year but we've got to be more consistent.”