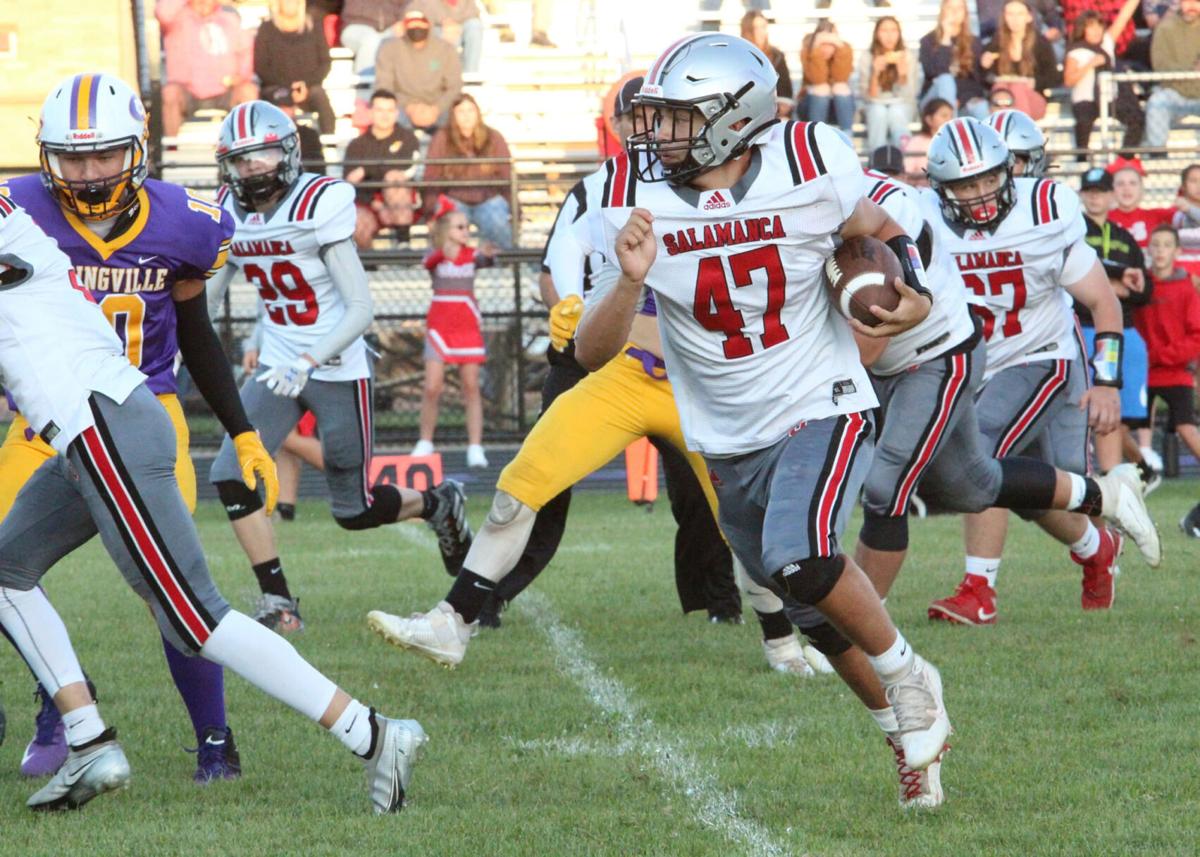 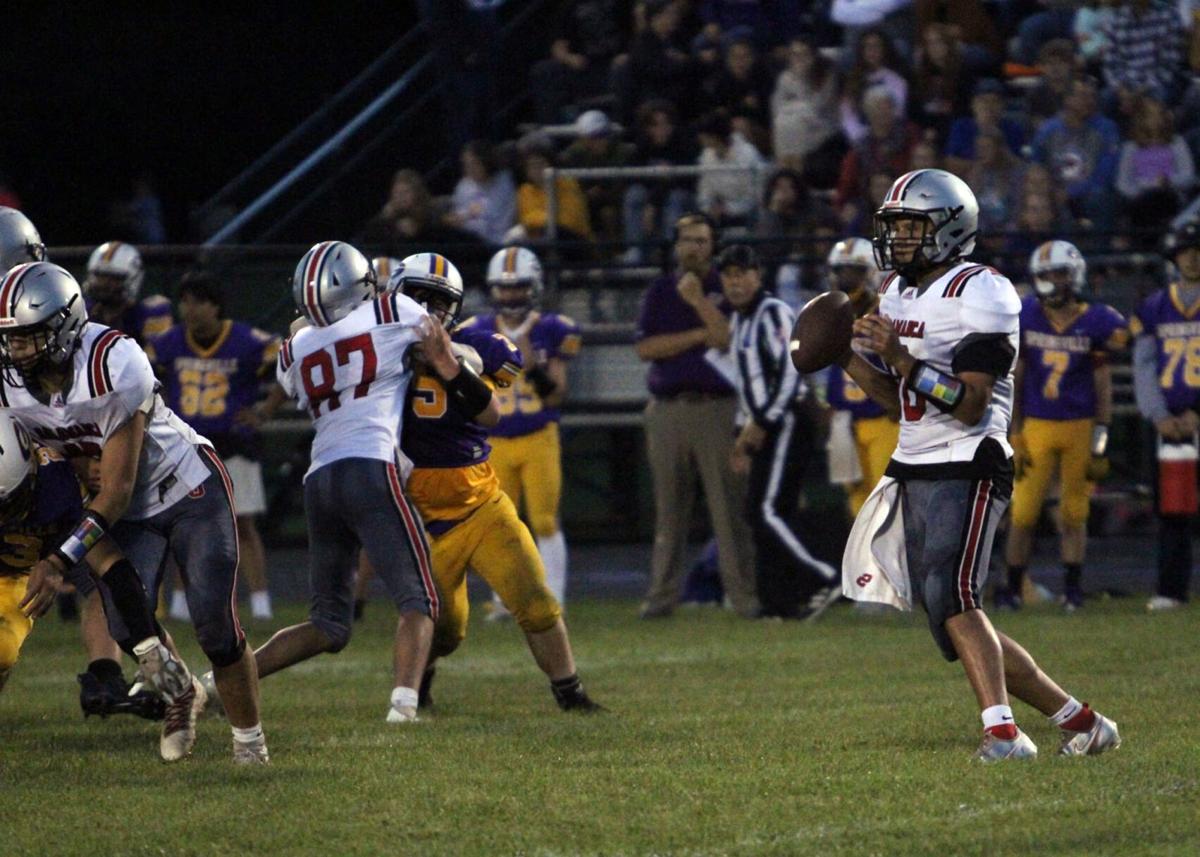 Salamanca quarterback Hayden Hoag (10) looks to throw from the pocket against Springville in a season-opening high school football game Friday night in Springville.

Salamanca quarterback Hayden Hoag (10) looks to throw from the pocket against Springville in a season-opening high school football game Friday night in Springville.

SPRINGVILLE — The Salamanca football team is off and running and, well, passing.

The Warriors found success through the ground and air Friday night in their season-opening non-league matchup at Springville’s Pop Warner Field, winning 36-8.

Junior running back Jesse Stahlman scored the game’s first touchdown and his team never trailed, leading 6-0 after the first quarter and 28-0 at halftime.

Salamanca’s new starting quarterback, Hayden Hoag, had a strong debut with 105 passing yards on 4-of-6 passing for two touchdowns and ran for two more (including a 40-yard score). Cole Hedlund scored both passing touchdowns and had three catches for 70 yards.

Salamanca coach Chad Bartoszek said the Warriors “looked the part” in their debut, even with some finer details still to clean up.

“We were still pretty good execution-wise,” Bartoszek said. “It's still early in the season, so we hadn't had a ton of live reps against a full 'D,' which is pretty typical early on in the year. But I was happy with just the way we were physical. We were still hitting, we were still attacking the ball, we had some guys who really brought it and those are the things that are hard to coach up. You just want your team to have some of those characteristics to be successful. I think our guys showed that they're going to be capable of holding their own up front, we're going to be able to defend, we're going to be able to move the ball. It's just we're going to have to get better execution-wise when we get into our league schedule.

“He knows how to deliver the ball,” Bartoszek said. “He's definitely someone who likes to run the show. He's the point guard on the basketball team. He likes to kind of control the line of scrimmage and the huddle and he has a good football understanding of where we want to put the ball and where we want to go. He'll probably tell you he was a little disappointed in some of the missed snaps and the fumbles, but in his defense we didn't really go live with him running the ball a ton, so it was kind of new for him. Obviously he threw the ball really well and we're excited to have that and we're hopefully going to be getting healthier and getting some kids back throughout the early part of the year here that will also give him some more weapons to throw the ball to. But it was a good start for sure.”

Colton Baker scored the lone touchdown for Springville and had 23 carries for 65 yards.

Salamanca plays its first league game this Friday in its home opener against Southwestern.

RANDOLPH — Xander Hind ran for 191 yards and three touchdowns on 15 carries to lead Randolph in a dominant season opener on Friday.

Carson Conley, Luke Pagett, Christian Burch and Michael Bohall all ran for a touchdown each as well.

Hind was recognized Sunday as a Connolly Cup/ADPRO Sports Week One top performer.

LACKAWANNA — A new-look Franklinville/Ellicottville offense got off to a fast start with four touchdowns in the first half for a 28-8 halftime lead.

New F/E starting quarterback Lucas Marsh threw for three touchdowns and ran for another, racking up 118 passing yards (6-for-11) and a team-high 61 rushing yards on 14 attempts. Logan Grinols had three catches for 76 yards (including a 50-yard touchdown) and seven carries for 47 yards, while Hunter Smith had two catches, both touchdowns, for 28 yards.

Hayden Trietley made six tackles (two for loss) to lead the F/E defense, while Christian Swalcy had five tackles (one for loss). Ethan Frank had a sack while Joe Conlon and Ben Brol shared another.

Ashlin Alexander-Hall scored both touchdowns for Lackawanna through the air (from quarterback William Gechell with four catches for 49 total yards.