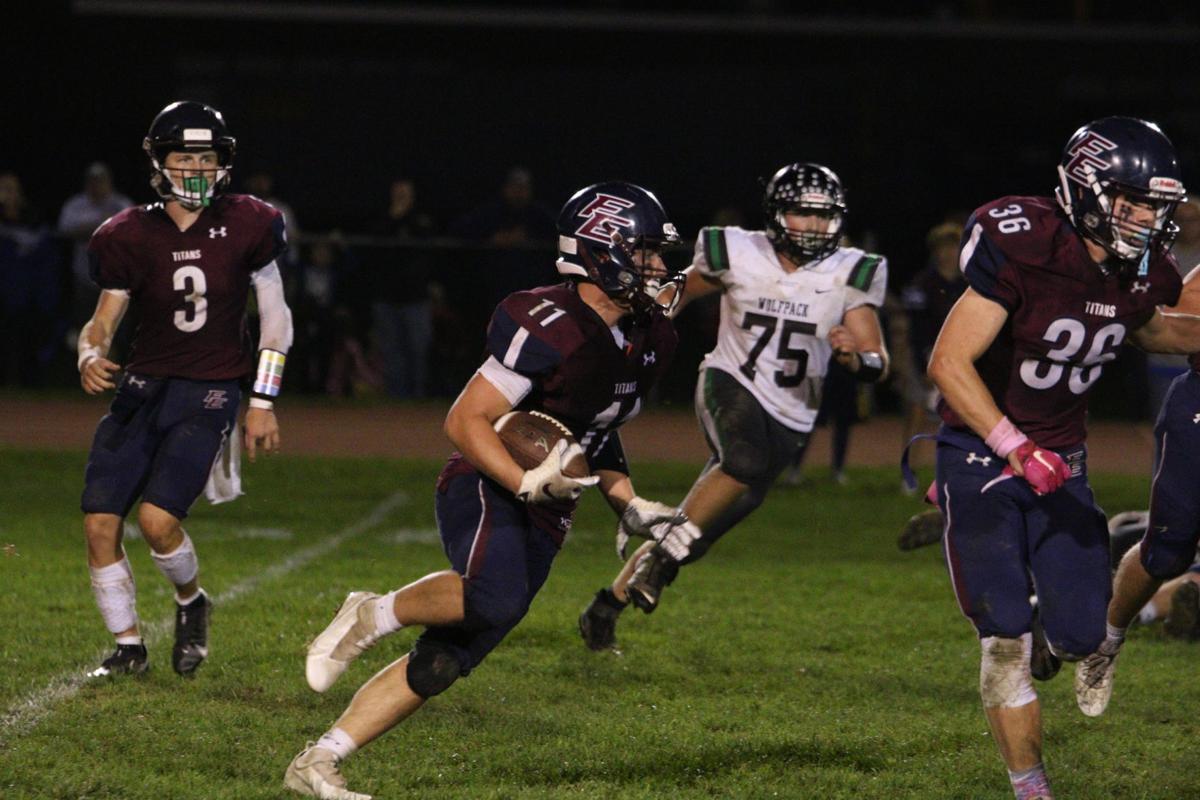 Franklinville/Ellicottville’s Beau Bielecki (11) looks for room to run as quarterback Lucas Marsh (3) and Hunter Smith (36) looks for a block during a Section 6 Class D matchup against Clymer/Sherman/Panama on Friday night in Franklinville. 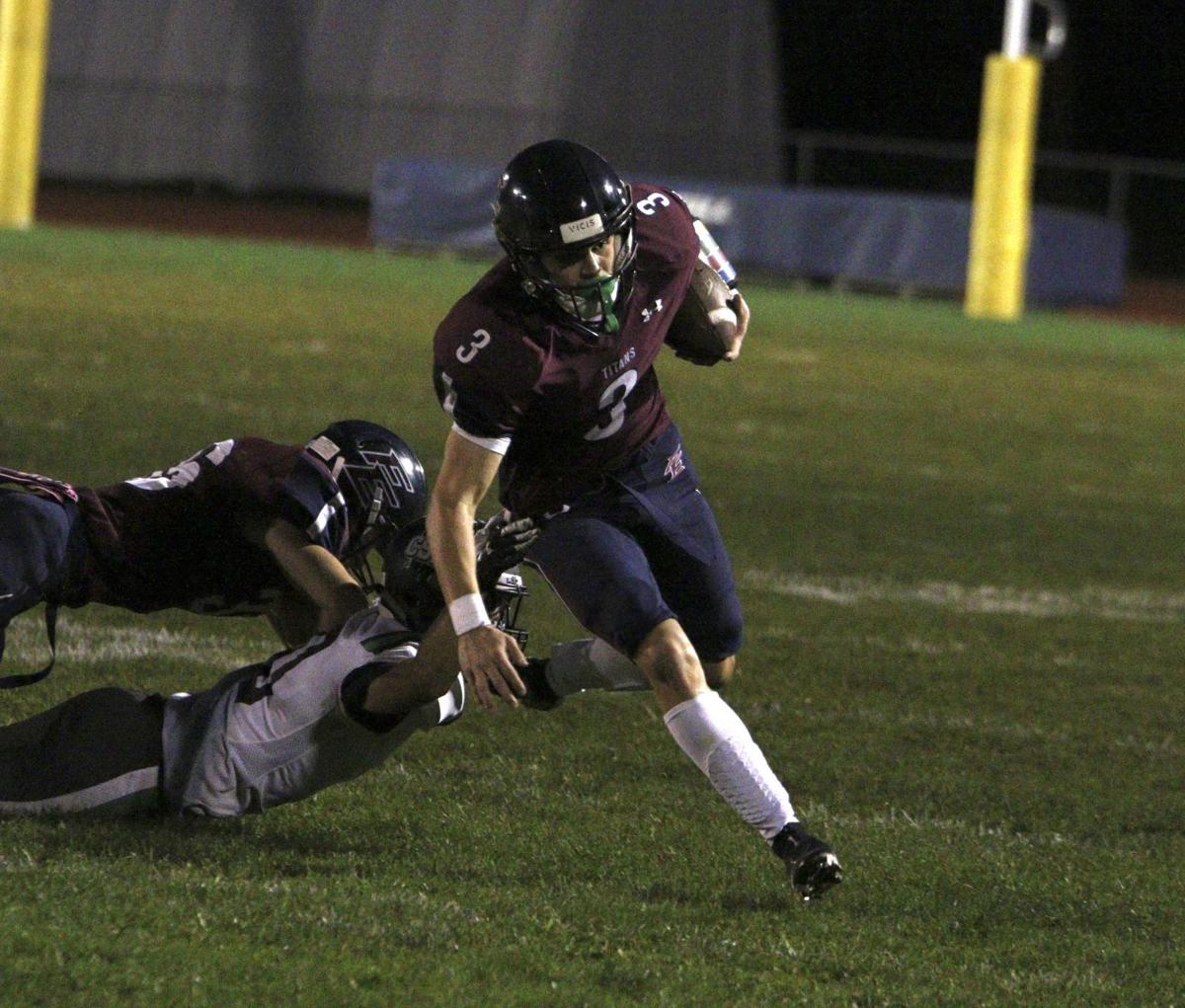 Franklinville/Ellicottville’s Lucas Marsh (3) breaks a tackle on his way up the field during a Section 6 Class D football game against Clymer/Sherman/Panama on Friday night. 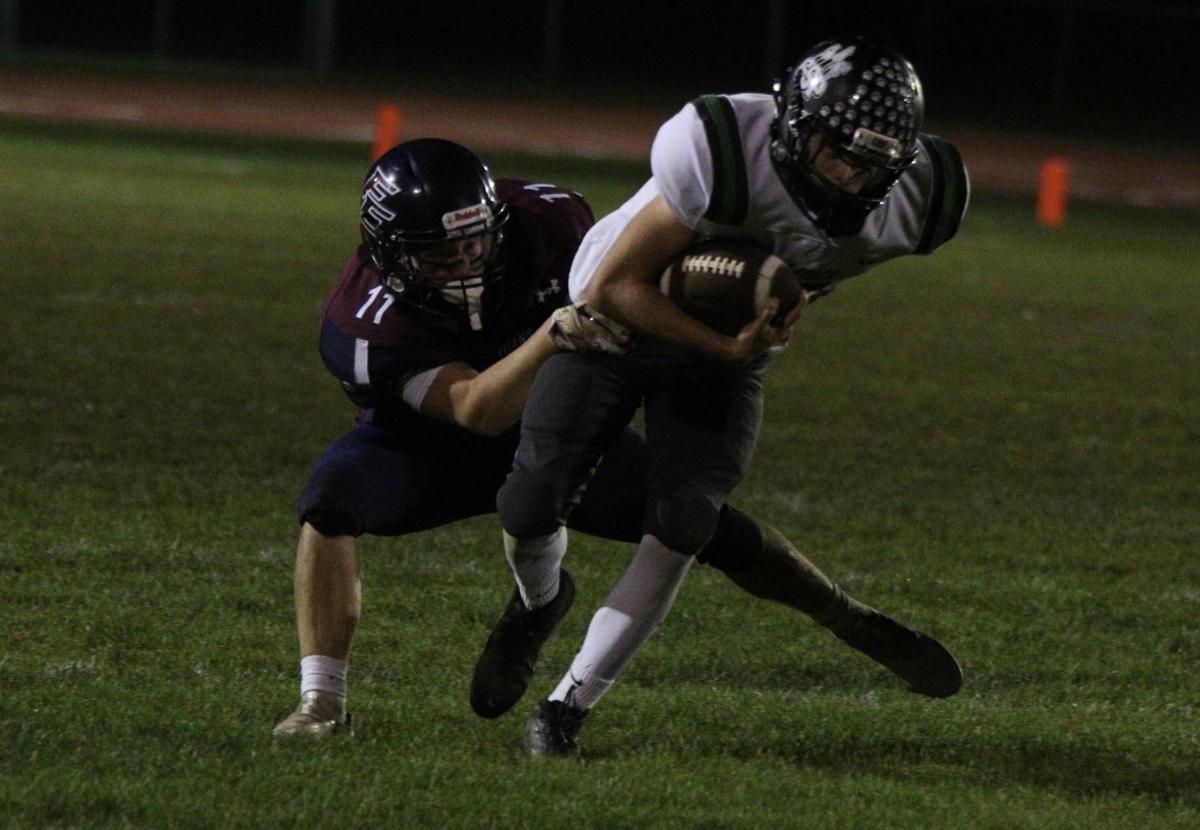 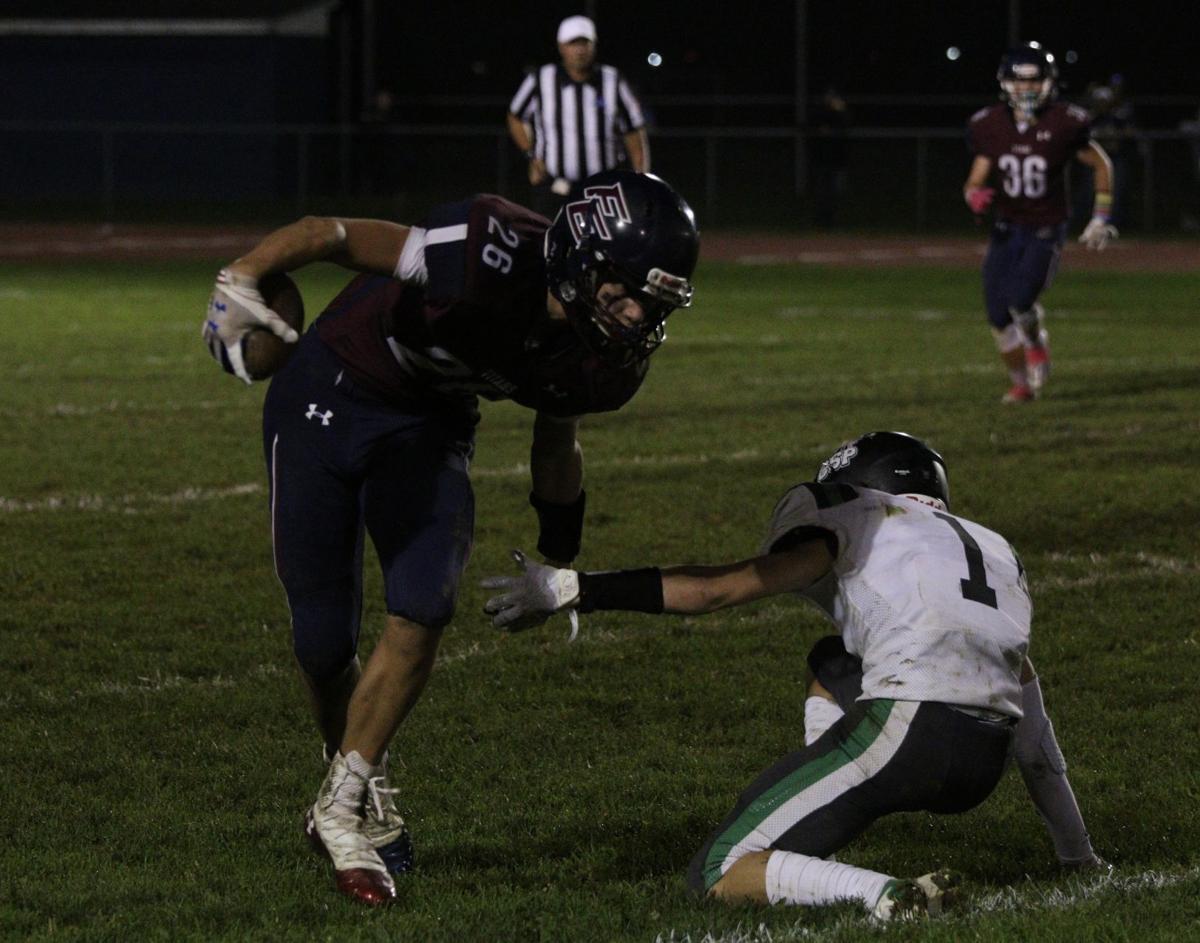 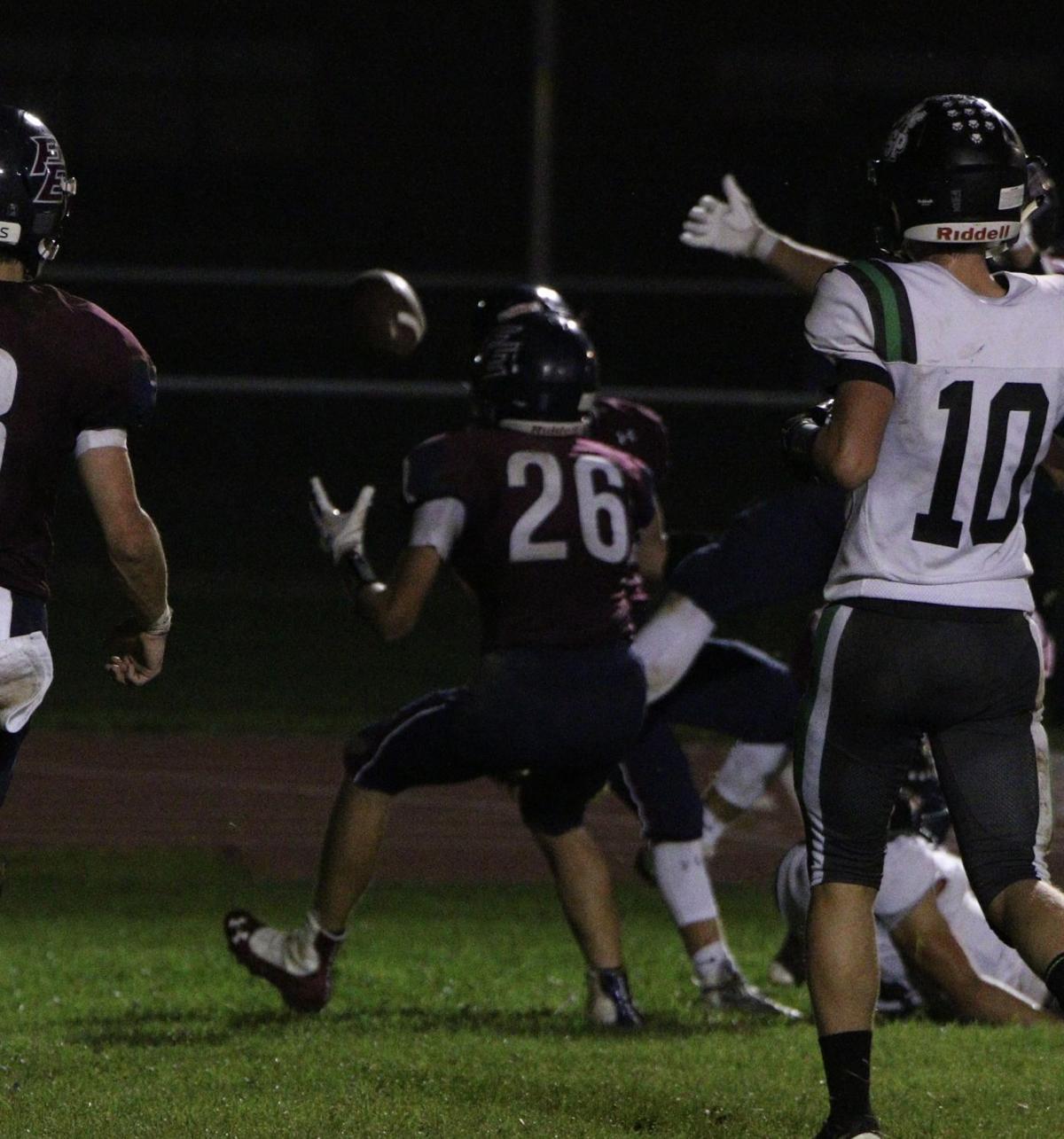 Franklinville/Ellicottville’s Blake Frank (26) intercepts the ball in the end zone.

Franklinville/Ellicottville’s Beau Bielecki (11) looks for room to run as quarterback Lucas Marsh (3) and Hunter Smith (36) looks for a block during a Section 6 Class D matchup against Clymer/Sherman/Panama on Friday night in Franklinville.

Franklinville/Ellicottville’s Lucas Marsh (3) breaks a tackle on his way up the field during a Section 6 Class D football game against Clymer/Sherman/Panama on Friday night.

Franklinville/Ellicottville’s Blake Frank (26) intercepts the ball in the end zone.

FRANKLINVILLE — Coach Jason Marsh said his Franklinville/Ellicottville football team has thrived on big plays this season. They produced a few on Friday night, but they needed one more to knock off Clymer/Sherman/Panama in a Section 6, Class D showdown.

A 30-yard Logan Grinols touchdown reception following a Braylon Wyatt interception gave the Titans the lead, but the Wolfpack responded with a score of their own and shut down F/E on three ensuing possessions to secure a 16-12 victory.

A four-yard scoring run by Trent Burchanowski with eight minutes remaining served as the winning points for CSP (5-1) in a game pitting second place teams behind Randolph in Class D. The victory puts the Wolfpack in the driver’s seat with two games remaining (one league) to take the second seed and sectional playoff bye.

The loss dropped F/E to 4-2. Instead of dwelling on the lost opportunity, Marsh opted to look ahead to the Titans’ next game.

“We have to do the right things to position ourselves for the playoffs and play our best football then,” he said.

Regardless of seeding, CSP coach Ty Harper expects to meet the Titans again in the postseason.

“At the beginning of the season the goal is always to host a playoff game,” Harper said. “That’s something that we put up on the goal board at the beginning of the season. To have the opportunity to be in the position to host a playoff game, that’s a great thing. But at the same time, we’re probably going to see these guys again. It’s going to be another battle.”

The Wolfpack took a 10-0 lead into halftime on a Bryce Hinsdale field goal and Lucas Lisciandro 16-yard touchdown catch on fourth down. They had a chance to extend the advantage early in the third quarter, but Burchanowski fumbled it away at the F/E 20.

The Titans proceeded to put together their only sustained drive of the game. It included a fourth-and-11 conversion and ended with a 23-yard pass from Gian Nuzzo to Blake Frank on another fourth down. Nuzzo was in at quarterback for Lucas Marsh, who left briefly with cramps.

On the ensuing possession, CSP drove down to the F/E 12. Instead of sending on Hinsdale for another field goal try, Harper kept his offense on the field for a fourth-and-8 play. Wyatt intercepted Kurtis Olson’s pass and returned it 60 yards to the CSP 30.

On the next play, Marsh hit Grinols to give F/E its only lead.

Harper said his team “bailed me out when I made probably the worst call of my coaching career on that (intercepted) pass at the end of the game. I thought that maybe we could go for the throat. Obviously it didn’t work out. But that’s what a family does. We all pick each other up when we make mistakes.”

Still, the Titans had three more chances in the fourth quarter to pull ahead.

First, Grinols returned the kickoff 42 yards to the CSP 44, but F/E only gained four yards and turned it over on downs. A Grinols interception then set F/E up at midfield, but the Titans gave it right back with an interception of their own.

F/E’s final chance came with just over two minutes left. An errant Lucas Marsh pass was picked off and CSP ran out the clock.

“We’ve got to make plays,” Jason Marsh said. “We started scrambling a little bit and our execution fell off at the end with fatigue and things like that. CSP is a good football team. They are so fundamentally sound. You’ve got to do everything perfect. We just weren’t quite there tonight.”

CSP’s Olson connected on 21-of-30 passes for 203 yards and overcame three interceptions. Burchanowski added 86 yards on 22 carries as the Wolfpack ran 66 plays compared to 39 for the Titans.

Lucas Marsh finished 10-of-19 for 90 yards. His last six passes in the fourth quarter resulted in six incompletions and two interceptions. F/E was limited to 46 rushing yards.

“Defensively we have to get off the field and get the ball back into our playmakers’ hands,” Jason Marsh said. “We made a couple bad decisions in the passing game tonight. We pressed a little bit. We’ll go back, watch film and work to get better. That’s our only option right now.”