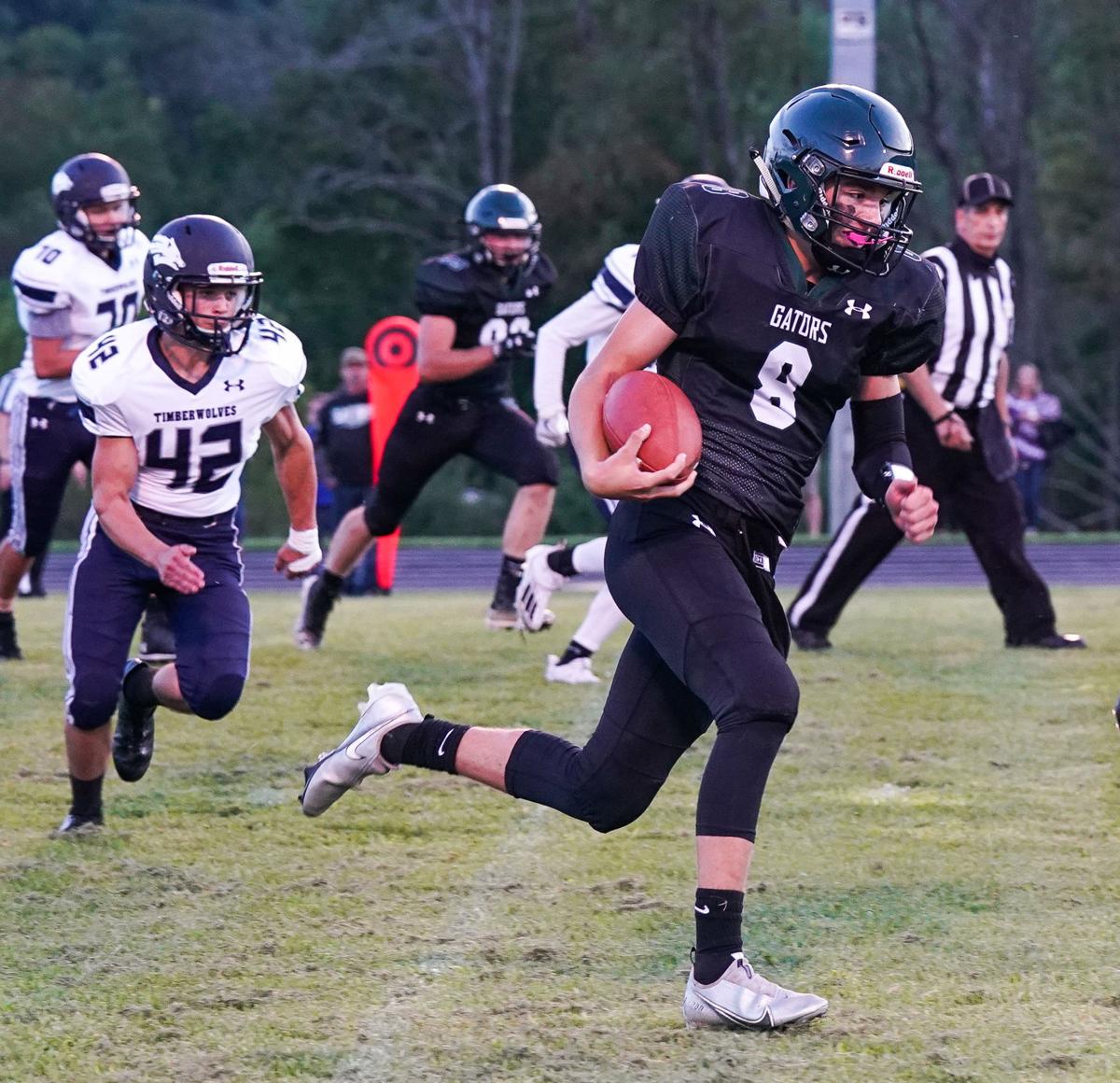 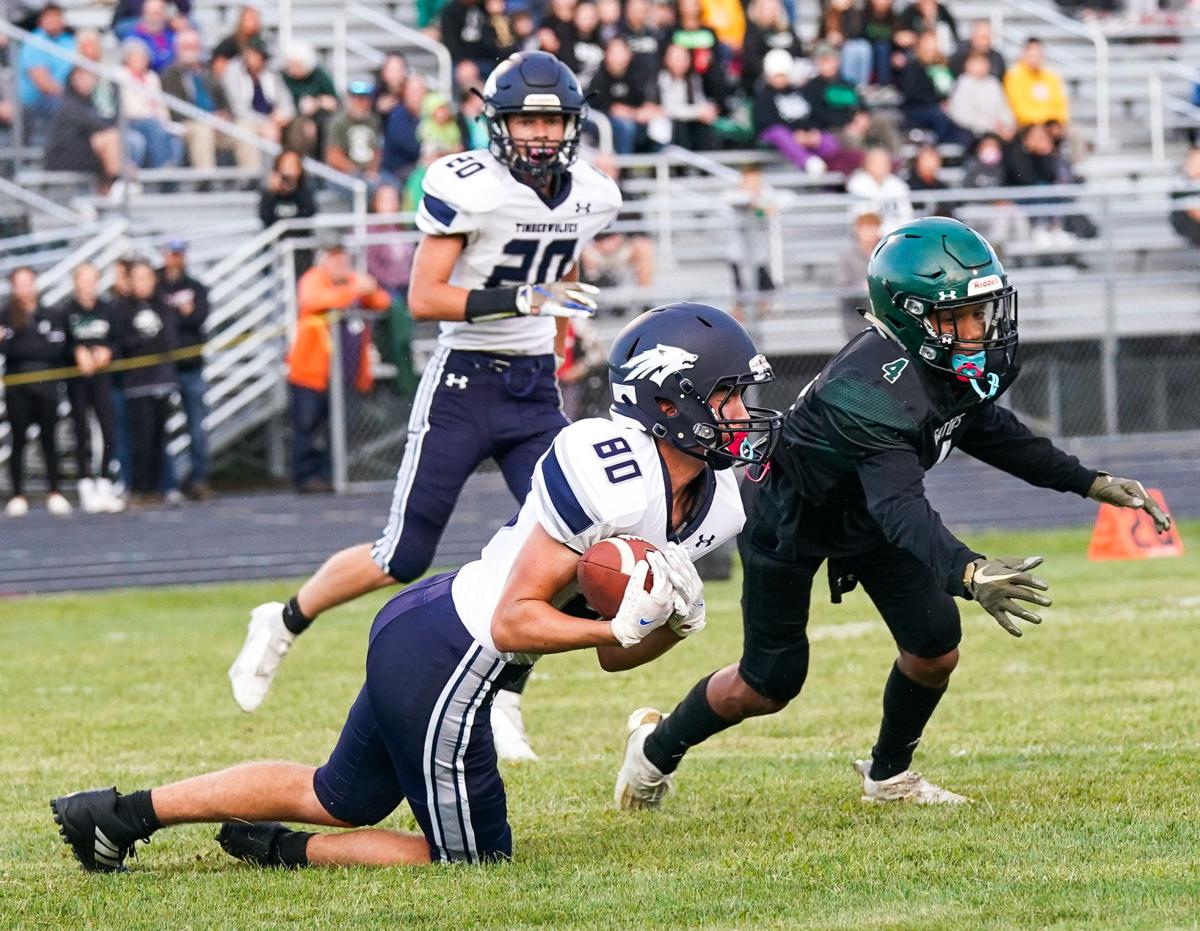 Cattaraugus-Little Valley’s John Visnesky hauls in a pass as Allegany-Limestone’s Gabe Ramadhan defends during the first quarter of a non-league high school football game on Friday in Allegany.

Cattaraugus-Little Valley’s John Visnesky hauls in a pass as Allegany-Limestone’s Gabe Ramadhan defends during the first quarter of a non-league high school football game on Friday in Allegany.

ALLEGANY — The regular season is usually not a time high school football coaches want to do a lot of experimenting.

But with so little practice time and no scrimmage opportunity leading up to Friday night’s opener, there is little choice.

That was obvious from the start for Allegany-Limestone as coach Tom Callen rotated quarterbacks in and out on a first possession that ended in a lost fumble. He then shuffled his defensive personnel after the Gators gave up a touchdown during that unit’s first time on the field.

No, the 2021 season did not begin well for the Gators. The good news for Callen’s team is they made quick adjustments that worked enough to result in a 20-12 non-league victory over Cattaraugus-Little Valley.

“Usually this is your Week 0 scrimmage game,” Callen said. “Now you’ve got to throw the kids out there with 10 practices. I think both teams were sloppy.”

But, Callen quickly added, “I’m very pleased. A win is a win. It was ugly, but you can only go up. If you clean that up, we’ll be a pretty good football team.”

SOPHOMORE quarterback Mike Frederick threw for a touchdown and ran for another to lead the Gators (1-0).

The Timberwolves (0-1) scored on their first and last possessions of the game, but coach Tim Miller’s club floundered offensively in between because it could not run the ball.

Miller attributed C-LV’s paltry 54 yards on 26 carries to — you guessed it — lack of preparation time.

“We missed assignments. There was confusion,” Miller said. “One of the things that hurts, and we’re seeing it again tonight: In the old days you had three weeks of practice. We had 10 practices and played on Day 11. That’s quick, and with no scrimmage. This was really our first live contact of the year. This is the first eye-opener the kids get, and it matters because you’re in a game. That came on us quickly. We’re real green up front. We kind of needed a scrimmage situation this year.”

THE TIMBERWOLVES took an early lead after Josh Halterman found John Vinesky for a 4-yard touchdown. Halterman started the game 6-for-6, including three completions to Dakota Allen for 81 yards.

That success didn’t last. The three-year starting quarterback only completed six more passes the rest of the game on 18 attempts.

Callen said A-L made adjustments in the back end of the defense that made a difference.

“We switched some kids around,” he said. “Not having a scrimmage, we really didn’t know who was going to perform in the secondary. We flipped some kids and it was a much better fit.”

Halterman finished the game strong with a 36-yard completion to Gage Furl that set up a 6-yard TD toss to Furl with 1:26 remaining. A-L recovered an onside kick and ran out the clock.

Besides not being able to sustain a rushing attack, Miller said C-LV couldn’t move the ball as well after Halterman took a hard shot in the second quarter.

“We ran a rollout pass this way,” Miller said. “He decided he didn’t have anybody open and he was going to keep it. He got blistered right here and was almost driven to the track. Super clean hit. He got a little happy feet after that. He settled back down at the end. His brain kicked back in and he realized he had more time than he thought.”

Frederick, playing his first significant varsity snaps, got the Gators on the board in the second quarter with a 60-yard completion to Andrew Giardini, who won a jump ball and broke two tackles on the way to the end zone.

Giardini’s score finished a 98-yard drive after A-L recovered from a holding penalty that wiped out an 80-yard Frederick run .

THE GATORS drove the ball 85 yards on their next possession, with the big play coming from the team’s other quarterback Gabe Ramadhan. The junior ran 57 yards to set up a short Eric Furlong rushing TD.

A blocked punt by Matt Giardini on C-LV’s first possession after halftime paved the way for A-L’s final touchdown, which came on a 9-yard run from Frederick.

Frederick, who finished 5-for-9 for 103 yards and added 60 yards on the ground, had only a small taste of varsity competition last spring.

“Mikey got a couple plays in, but nothing significant,” Callen said. “He busted his butt over the summer lifting and coming to sessions. Everything he did tonight was the result of his offseason work. He earned it all.

“I was rotating quarterbacks because I wanted to see what Gabe can do in game action — not in practice or 7-on-7,” Callen added. “I wanted to see what he can do when somebody is coming after him. I thought he played well, too. Gabe is a lefty and Mike is a righty. It gives me options going both ways.”

“My quarterback is a third year guy,” Miller said. “We have decent receivers. We have to be able to take advantage of some different looks.”

He added, however: “It makes for a long season if all you can do is sit back and chuck it. We obviously got some things to work on.”