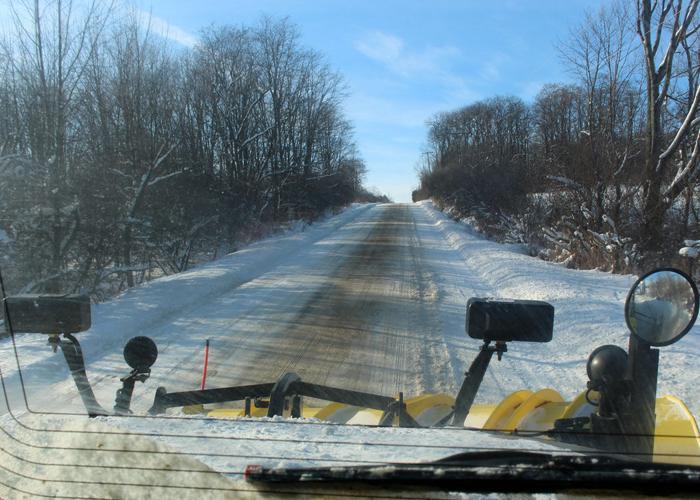 The view of the road from the front seat of a Cattaraugus County Public Works Department snow plow. 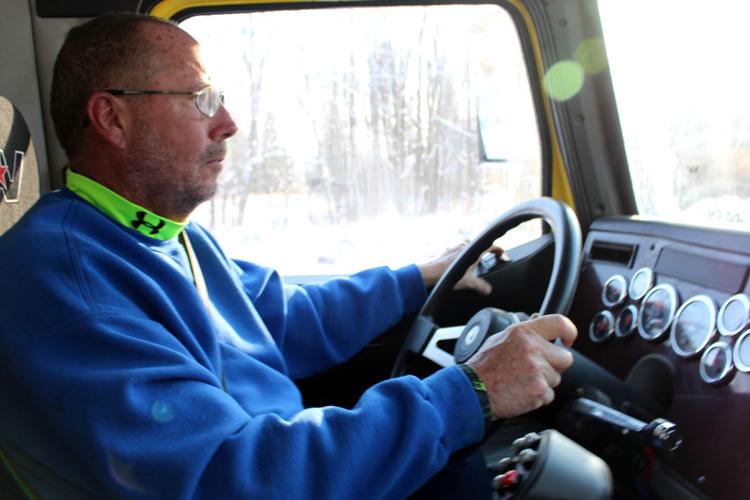 The view of the road from the front seat of a Cattaraugus County Public Works Department snow plow.

ALLEGANY — Dave Blatchley of Olean has been driving snow plows for Cattaraugus County for 20 years. For 10 years before that he was a truck driver for the Olean DPW, plowing and sanding city streets.

Blatchley’s on the second shift, maintaining sections of three county roads in the towns of Allegany, Hinsdale and Ischua, starting at 1 p.m.

By 1:30, he’s checked the truck over and backed out of the Allegany Barn on Seventh Street near Buffalo Road and heads for the sand and salt piles. “I check the radiator, the oil and the windshield washer fluid,” he said Tuesday afternoon.

He’s loaded up with 2½ scoops from a frontloader — a mixture of 10 percent salt and 90 percent sand.

The brutally cold temperatures are too low for salt to melt icy roads, but a little mixed with the sand provides grit for traction on the road surface. When it’s warmer, the county uses a 30 percent salt mixture.

As he pulls out onto Buffalo Street, he radios his destination to the public works dispatcher in Little Valley.

His 2016 Western Star truck is automatic, so there’s no shifting through the gears. It’s a surprisingly smooth ride with a load of sand/salt and a front plow and wing blade. The seats are very comfortable and cushion bumps in the road.

Blatchley usually heads to the Five Mile Road to clear it before school gets out. He then gets on Interstate 86 for the ride to Exit 26 and the ride north to Main Street in Hinsdale, where he’ll put a little extra sand and salt with the push of a button on a computer controlling the rate of application of sand and salt.

“I always try to get the schools done before they let out in the afternoon,” he explained.

Then he heads to Gile Hollow Road before moving on to Johnson Hollow Road, farther north on Route 16. Usually he’ll hit all three roads twice during his shift. A round trip can take 2 to 2½ hours. Trucks at the Allegany Barn cover about 80 miles of roads.

“If it’s bad, we can stay over for another round,” Blatchley said. Sometimes the morning crew is called in earlier than 4 a.m. if things look bad. The county runs two shifts from November until April.

Blatchley controls both the front plow blade and the wing with a joystick.

“My son said it would be like a big video game, “ he said. “I don’t play video games, but this system is pretty easy.”

Yet sometimes plowing can get hectic, especially when it’s blowing snow and difficult to see. “Experience helps,” Blatchley said. “That way you know the road.”

One of his memorable moments on the backroads include finding a dog in the middle of the road with no collar or tag. He placed it in the passenger seat and took it back to the barn.

“One of the other drivers took it and still has it today,” he said. “We looked for an owner. It was probably dropped off.”

Another time, “about nine years ago, I saw smoke on the side of a house and called it in to dispatch. Most of the time you just see snow and more snow.”

Blatchley finds himself giving wide berth to a man with a snowblower on Gile Hollow Road. He feels a little guilty about pushing back the banks and coming to someone’s driveway that has just been shoveled or plowed.

“You have to keep the snow pushed back,” he said. “The wind really howls up here.”

It’s more fun to plow wet snow because it doesn’t blow up on the windshield, obscuring visibility. “You have to pay attention, particularly on bridges and by guardrails,” he said. “They can mess up the wing.”

Like other drivers, Blatchley is used to getting called out early, on weekends and holidays.

“We got called out on Christmas and the new commissioner, Kathy Ellis, called the barns to thank everybody for working on a holiday,” Blatchley said. “That’s the first time I ever remember that happening.”

There are five other highway barns across the county — in Little Valley, Randolph, West Valley, Markhams and Franklinville. Together, they are responsible for maintaining 400 miles of county roads.

A fire in October put the Franklinville Highway Barn out of commission. Ten trucks are maintained out of that barn.

“You have to like it,” Blatchley said of driving a snow plow. “It’s part of a public service. You are doing something nice for the public at a high traffic time. It’s a big responsibility.”

Next to driving in the near white-out conditions, Blatchley isn’t fond of having to back the plow up at intersections where he has to turn around.

“On top of the hills it’s a different world,” Blatchley said.

Winds whip the snow across the roads, filling in the lanes. On the hills, Blatchley looks for a good sanding pattern in his rear view mirror, spreading it from the center line to the side of the road, but not the shoulder.

“Sometimes you hit one, especially at night in a blinding snowstorm,” he said. “Sometimes you can feel it. Other times you see later that it is gone.”

Another question Blatchley said he gets a lot is what plow drivers do about cars that are stuck. If they are a hazard to navigation, drivers will often help a motorist out, he said.

One thing that has changed over the years he’s spent plowing snow is operator comfort, Blatchley said.

“The seats, the suspension, automatic transmission and speed control … these new trucks are beautiful.”