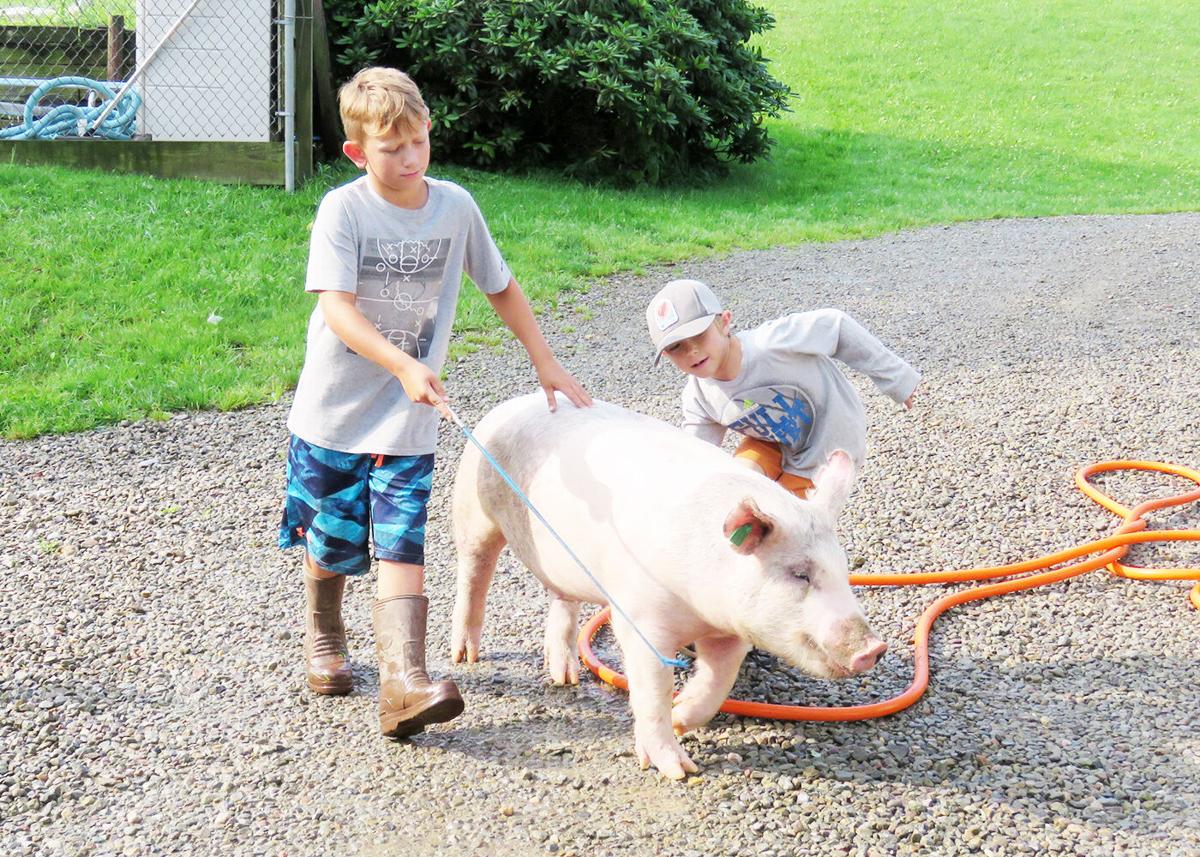 With the assistance of Ashton Sears (right), 4-H exhibitor Austin Bushey is shown training a pig for the Cattaraugus County Fair. 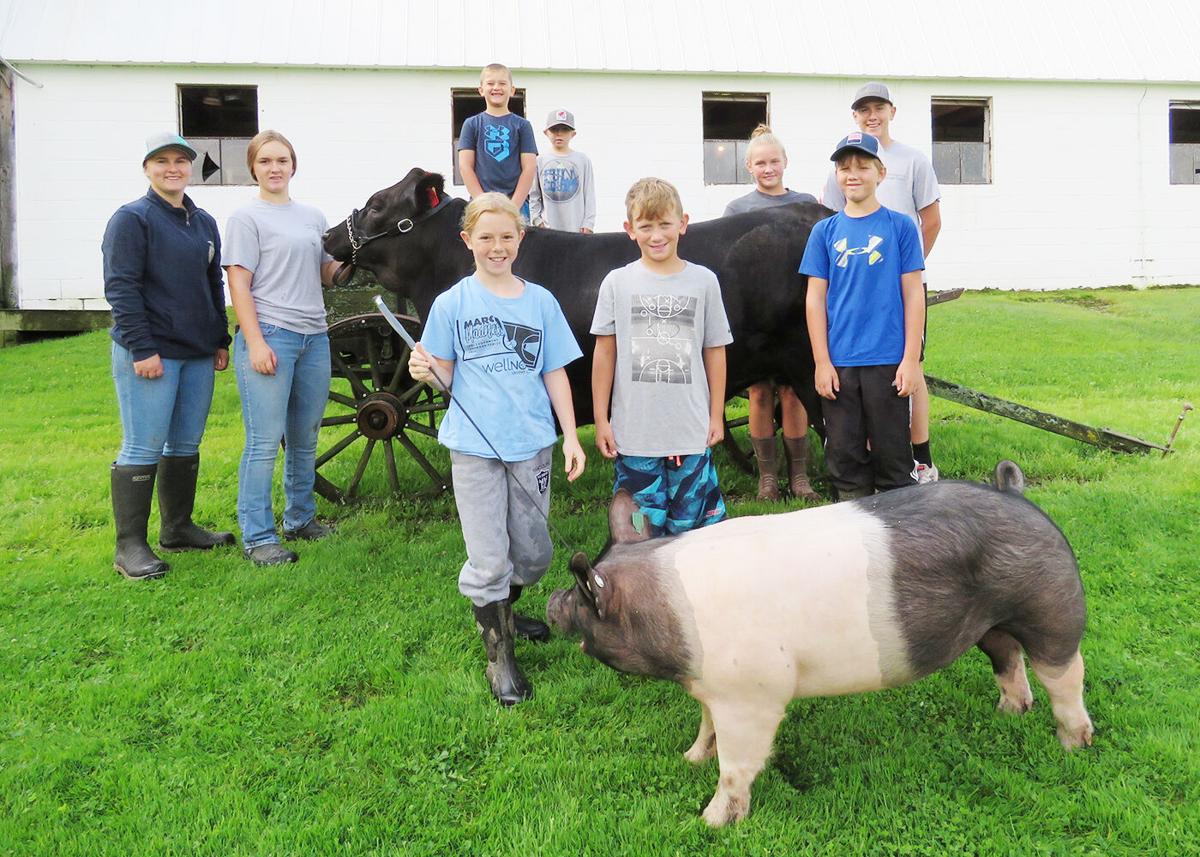 A group of 4-H exhibitors are anxious for the Cattaraugus County Fair to begin. They are shown at the farm of Randy and Susie Smith in Napoli with two of the 14 animals they will be showing at this year’s fair. Front row (from left): Ava Sears and Austin Bushey. Second row (from left): Haleigh, Harper and Reagan Smith. Back row (from left): Remington Smith, Ashton Sears, Ryanne Bushey and Ryder Smith. 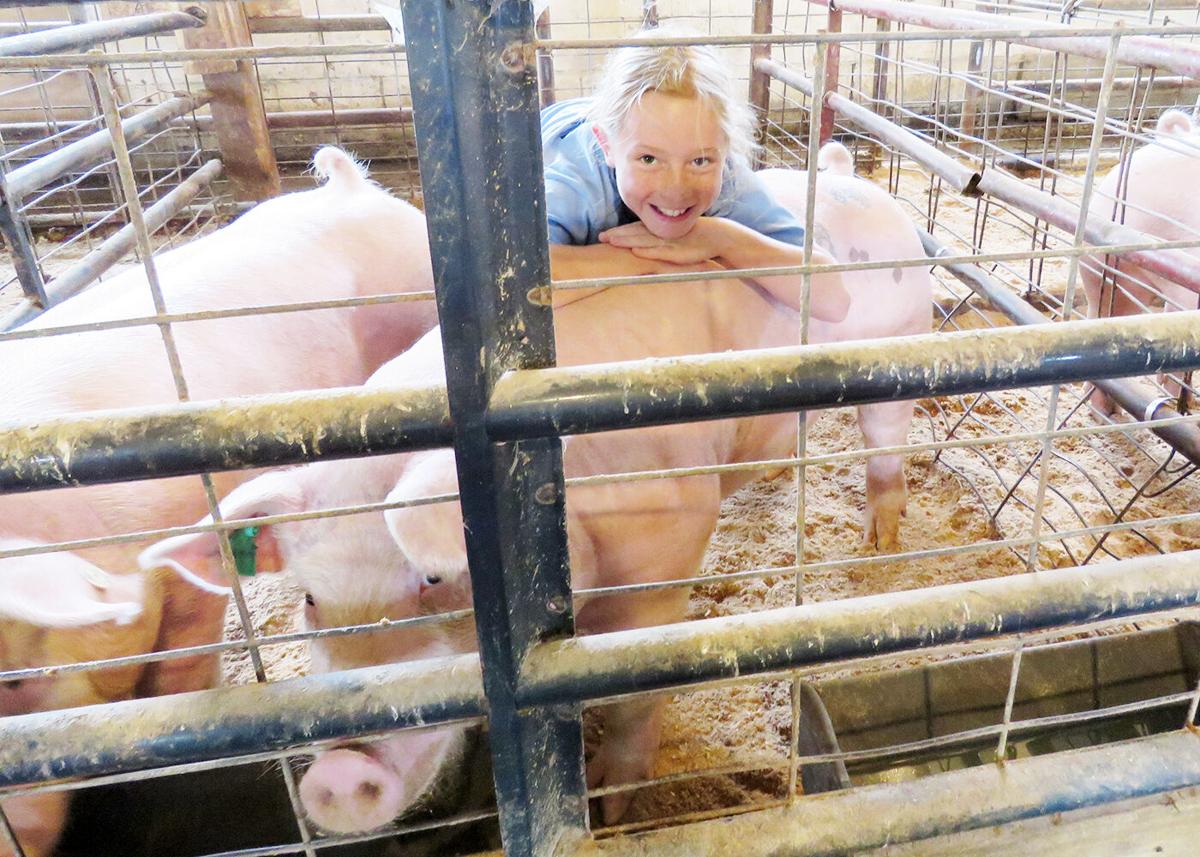 This is 4-Her Ava Sears’ first year to show pigs at the Cattaraugus County Fair.

With the assistance of Ashton Sears (right), 4-H exhibitor Austin Bushey is shown training a pig for the Cattaraugus County Fair.

A group of 4-H exhibitors are anxious for the Cattaraugus County Fair to begin. They are shown at the farm of Randy and Susie Smith in Napoli with two of the 14 animals they will be showing at this year’s fair. Front row (from left): Ava Sears and Austin Bushey. Second row (from left): Haleigh, Harper and Reagan Smith. Back row (from left): Remington Smith, Ashton Sears, Ryanne Bushey and Ryder Smith.

This is 4-Her Ava Sears’ first year to show pigs at the Cattaraugus County Fair.

NAPOLI — As the 178th Cattaraugus County Fair gets ready to open on Aug. 1, 4-H members all over the county are eager to make up for the loss of last year’s fair experience, due to the pandemic.

The Smith farm in Napoli has been buzzing with daily activity all year long as 11 children prepare their animals for show at the fair. Most of them are the grandchildren of Randy and Susie Smith, who own the farm, and the others are friends and a cousin from Randolph.

The participants include Haleigh, Harper, Ryder, Reagan and Remington Smith and Ava, Aryana and Ashton Sears, all of Napoli; and Kyle Senn, Ryanne and Austin Bushey, all of Randolph.

Randy Smith said the kids are all lone 4-H members. The group is not an official 4-H Club but, because there are so many kids, they operate like a club. Ranging in age from 7 to 18, the kids all attend Randolph Central School.

The group will show 14 total market animals at the fair this year — four steers and 10 pigs. Smith said all four steers are Hereford-Angus cross. The pigs are Yorkshire-Hampshire cross.

Raleigh said the kids keep most of their animals at his parent’s farm where they are raised, bred and trained for show. The kids come whenever they can in the mornings to work on chores and clean their animals.

Although they have a few horses on the farm, Harper, Ava and Aryanna are showing horses from Dunham’s Sport Horse located nearby.

Smith is responsible for his grandkids getting started in raising and showing pigs. Hayleigh said he brought home a pig named Charlotte one day and, when they bred her, she had three piglets. They lost the mother, so the kids had to take care of the young swine.

“That first pig actually came from the 4-H market sale,” he said. “The girl showing it did not want her pig to go to the butcher, so we brought her home and bred her.”

“Our first year, my brother, Ryder, and I showed two of the three pigs in the market class. Ever since then, we’ve just kept showing,” Hayleigh said. “We loved the experience and how much it taught us throughout the years, so we just decided to keep going with it.”

Smith said the pigs are a six-month project. With the exception of this year, they are bred and raised on his farm. They are born in January and the kids start handling them right away. Unless they have shows ahead of time, they start training the pigs for the fair about April.

Randi Sears, Smith’s daughter, said the beef animals are almost a two-year project. They are born in January or February and the kids start working with them when they are a couple of weeks old. Halter training begins by October, at about nine months old. When the animals are 15 to 18 months old, they go to the fair.

Raleigh, who heads the committee for the market sale, said they have scales onsite and weigh the animals once a week. That way, they can see if an animal is losing weight and something is wrong. If it’s not eating right, they can change the grain or whatever else needs to be done. The animals also get washed every week and conditioner is used on the hair and skin.

“Right now, these beefers weigh about 1,250 pounds and one of the pigs weighs over 600 pounds,” he said.

It can be emotionally hard for the kids to send their animal to market at the end of the fair. Hayleigh said 4-Hers have to learn how to deal with their animals going off to be butchered.

“I had a tough time my first year, and I will never forget my first pig,” she said. “After that, you get used to not getting too attached.”

Smith said he doesn’t like sending an animal off to market either, but they try to market all male animals that have been neutered and have no other purpose.

“They can’t breed and they can’t reproduce. The kids can understand that it does no good to keep the animal,” he said. “There are still some females sold at market but, overall, we try to do animals that have no other purpose.”

With last year’s fair being canceled, it was a very disappointing season for all 4-H members. They had been working hard with their animals all year in preparation for the fair.

Hayleigh said it was really hard to hear the news that the fair was canceled because, when summer comes, they always think of the fair.

“We still got our animals out and walked them to keep them used to being on the lead and around people,” Harper said.

Smith said the kids worked hard last year and were determined to get buyers for their market animals. They did it privately and on their own.

This year’s 4-H Market Class Animal Sale is a live auction with online bidding that will open Friday, Aug. 6 at 5 p.m. The live auction and webcast will begin Saturday, Aug. 7, beginning at 1:30 p.m. at the dairy and livestock arenas. A Junior Department schedule of events is available on the county fair website at cattarauguscofair.com.