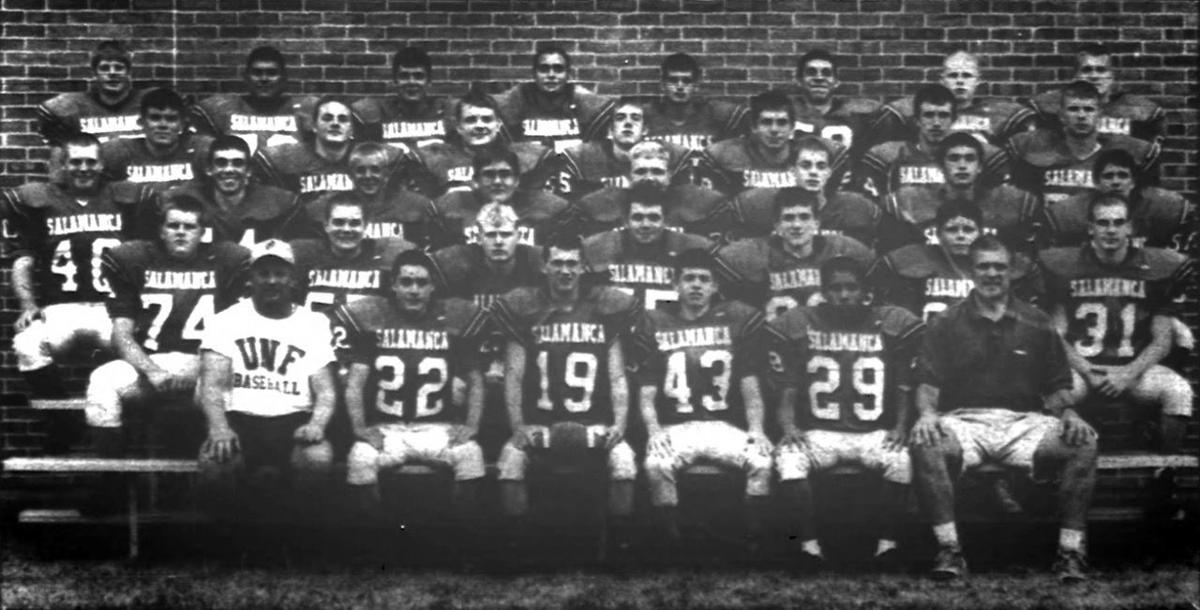 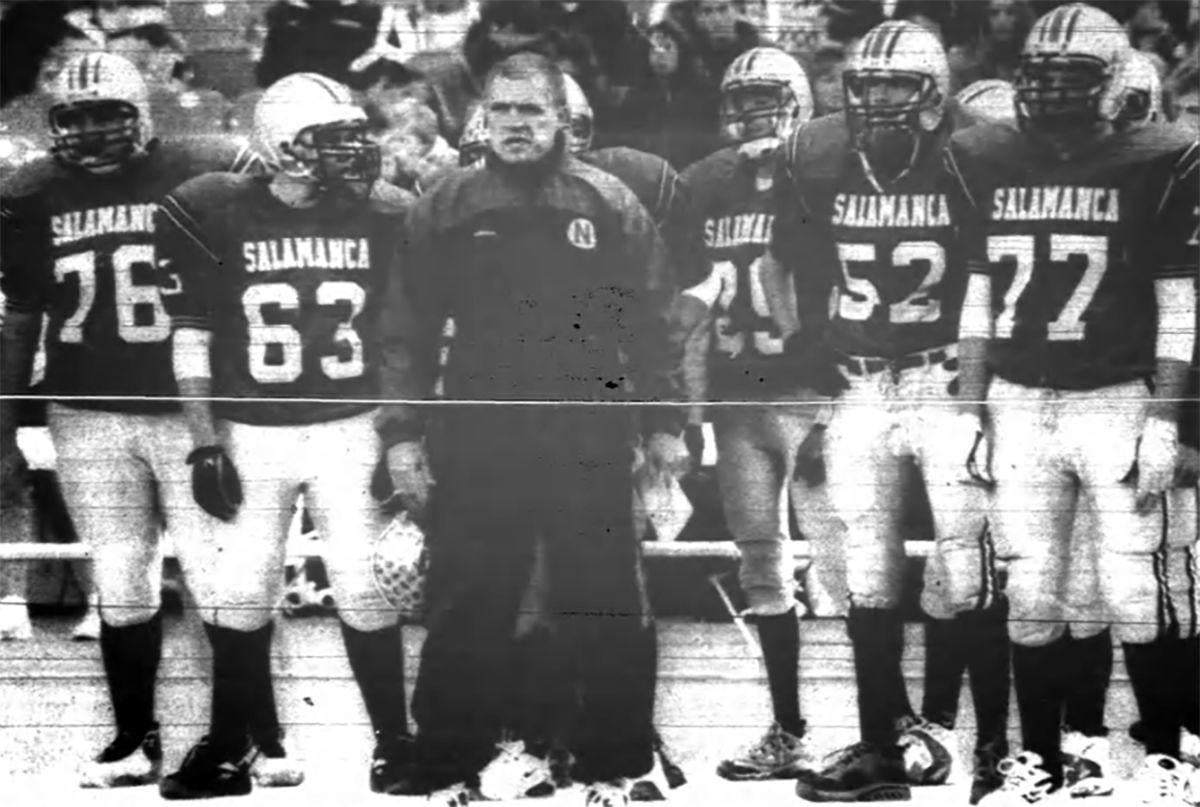 Coach Rich Morton stands with players on the sideline for the Salamanca varsity football team during the Section 6 Class C championship game against Allegany-Limestone in 1999.

Coach Rich Morton stands with players on the sideline for the Salamanca varsity football team during the Section 6 Class C championship game against Allegany-Limestone in 1999.

(Editor’s note: This is the last in a three-part weekly series on the 1999 Salamanca football season, which culminated in the program’s first state championship game appearance.)

With a coaching change for the first time in 25 years, the players remained a rock Salamanca’s new football staff could rely on in 1999.

“Dating back to when we started weight training, we would get down at the end of weight training … (then) we’d go outside and do our agility drills,” said Seth Hostuttler, a senior two-way lineman on that team. “Right from June, we put our hands in the middle and broke down as ‘state champs,’ ‘state champs,’ because that’s what we wanted.”

While the Warriors finished one game short of that goal, losing 32-20 to Edgemont, clearly they were right to dream big. By winning the Far West Regional and NYSPHSAA Class C semifinals, Salamanca won two games that it never had in program history.

So what set this team apart? While undoubtedly talented and deep, egos didn’t get in the way for this group, several 1999-00 seniors said.

“THE THING I remember most is that there wasn’t many superstars,” said Jason Wass, a senior tight end/linebacker that year. “Everyone was really good at their job. We didn’t have many holes at all. I believe we had only two guys that weren’t seniors starting both ways. So we were very experienced, a lot of guys played before with the ‘98 team in the playoffs and things like that. But it was the best, most complete team that I was a part of.”

“We all wanted everybody to achieve beyond their expectations,” Potter said, “so I think (Jason) nailed it right on the head that we had a lot of success, we had a lot of accolades, a lot of individual accolades such as Chris Drugg breaking some records and Jason Siafakas on defense breaking some records. But there was no resentment, we were 100% the definition of what a team is.”

The team’s “unity,” in Potter’s words, stemmed from playing together for years before ever reaching high school.

“Everybody was all on the same page and we all had one goal in mind,” Potter noted. “Obviously an undefeated season would have been the ultimate prize. We almost made it. But it all started, I remember, from Little League and midgets and peewees, we all played together and then growing up into the system, it was a set system, it was a foundation laid by the previous coaches and coaching staffs. What made it special was the camaraderie, we had one goal in mind.

“The expectation was there, each and every time was to win. We all had the confidence, each and every opponent we faced, that we were going to win, we were going to dominate that game. That comes from the preparation and the coaching staff and the guys before us, even the previous year. They left a good foundation because Coach Whitcher, that was my junior year, his final season. Coming into my senior year, Coach Morton came in and nothing changed as far as the system. We all had the same goal in mind.”

Once the playoffs began, the Warriors could see just how much they improved over the dominant, undefeated regular season.

“We struggled against Eden the first time we played them,” Wass said. “We knew we were a good team, we were going to be a good, competitive team. But when we struggled to beat Eden the first time we played them, and then the second time we came back and we won (40-12). We knew what they were doing, we knew they couldn’t do anything against us, and that’s when we knew that we were going to have a chance to do some damage.”

Drugg, Wass, Potter and Hostuttler all agreed the Far West Regional victory over LeRoy, which had beaten Salamanca twice (1998 and 1996) in that round, marked the best moment and memory of the season.

“THAT WAS the main (goal), the prior years any time we would play them, we would lose,” said Potter, who now lives in Gilbert, Arizona with his wife and young son. “So just getting over that hump, that was an unbelievable performance and we had so many people from the community travel up to Rochester to see that game and we overcame a lot of adversity. Beating LeRoy was definitely one of the moments there.”

Hostuttler added, “Beating LeRoy was the cap on the season just because it was something that had never been done before. If we would have gone into the semifinals the following week and lost, then it still would have been the cap of the season because we were able to get by that Section 5 LeRoy powerhouse. Previous state champions had all come out of Section 5, whether it be LeRoy or Caledonia-Mumford for years. The state champions would come out of Section 5 and they would beat us on their way to go there, so that was a huge win for us.”

Drugg said beating LeRoy and being the first Warrior team to play at the Carrier Dome made for two great memories.

“It kind of made you feel like you were playing at the next level, to go into a nice, Division I college dome,” said Drugg, who lives in Salamanca after spending some time in Kansas. “It was nice playing at (then-Rich Stadium), too, but I had played at Rich a few times because I had gone there when I was an underclassman. That wasn’t a new experience, but going to the Carrier Dome was definitely a new experience, it made you feel somewhat like you were playing at the next level.”

Several members of the ‘99 team remain in football locally. Wass coaches the Salamanca Warriors youth peewees. Hostuttler has coached the Salamanca Sabers for 20 years and the junior varsity for five years. He’ll switch to coaching a new modified team for the district this fall. Aaron Hill, a freshman in 1999, and Dustin Ross, then a sophomore, also have served on the Salamanca High football staff recently.

“It wasn’t a privilege, it was a responsibility,” he said.

The Back Page — Episode 4 with special guest Caitlin Lowe

Some clouds this evening will give way to mainly clear skies overnight. A stray shower or thunderstorm is possible. Low around 65F. Winds light and variable.

Sunshine and some clouds. A stray afternoon thunderstorm is possible. High 91F. Winds light and variable.