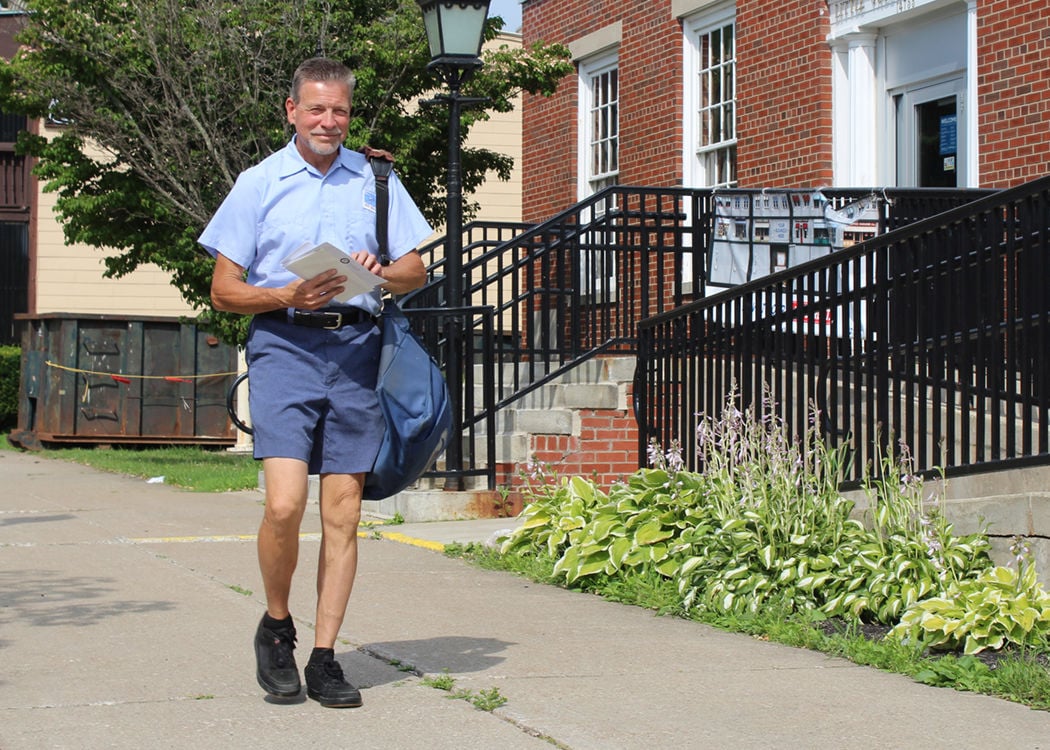 Kevin Andrew, who marked 30 years as an employee with the United States Postal Service, walks by the Little Valley Post Office on Main Street where he has spent the majority of his career. 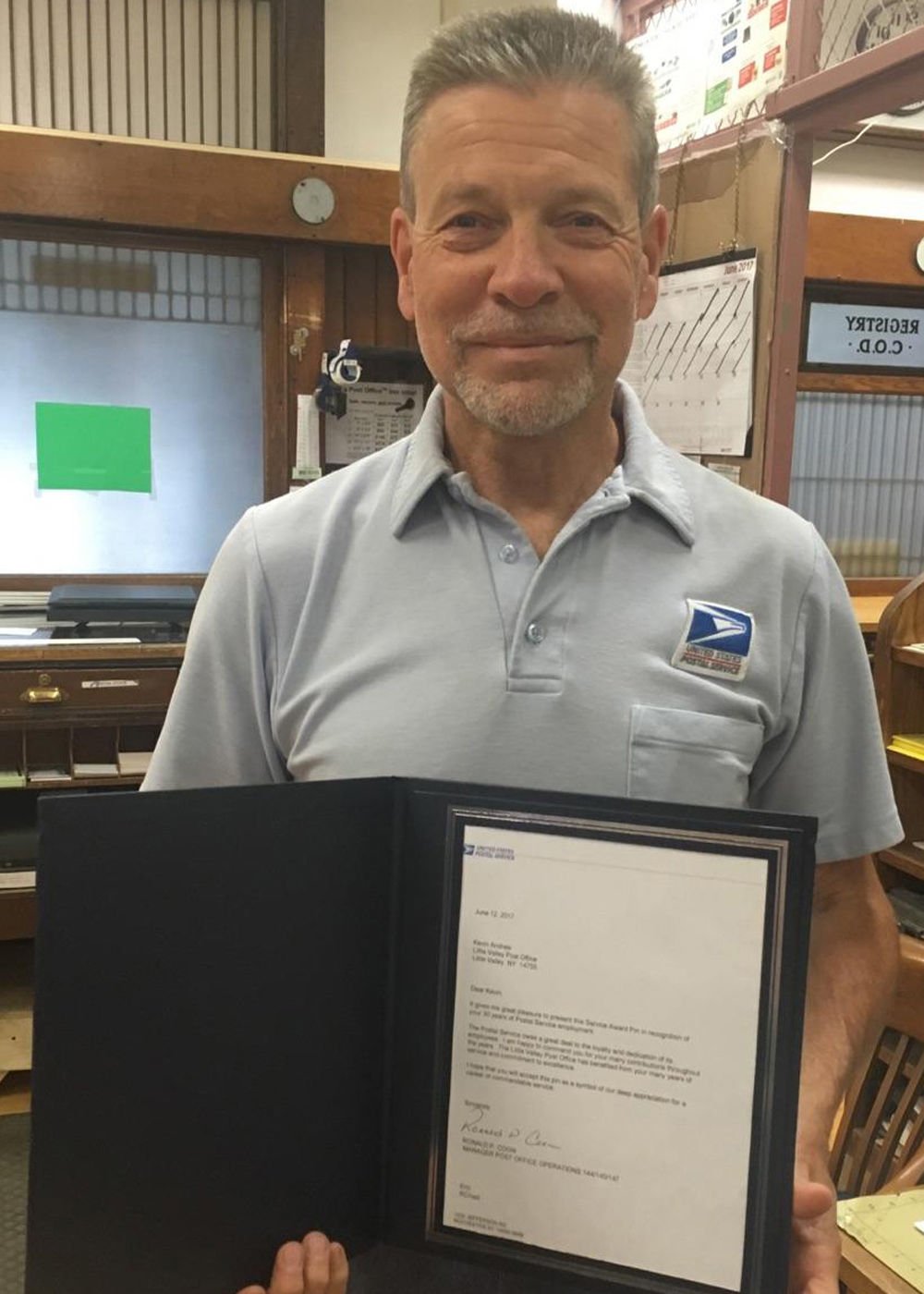 Kevin Andrew was recognized earlier this summer for 30 years with the United States Postal Service.

Kevin Andrew, who marked 30 years as an employee with the United States Postal Service, walks by the Little Valley Post Office on Main Street where he has spent the majority of his career.

Kevin Andrew was recognized earlier this summer for 30 years with the United States Postal Service.

LITTLE VALLEY — Over the course of a year, Kevin Andrew walks a distance equivalent of Buffalo to San Francisco, Calif., and he has loved practically every minute of it for the last three decades.

A familiar face to many in the small community of Little Valley, Andrew this summer marked 30 years of employment with the United States Postal Service and doesn’t show signs of slowing down anytime soon.

“It’s fun to come to work,” he said during a recent interview at the Little Valley Post Office on Main Street. “We do our job and everyone works hard, but we have fun.”

Primarily as a mail carrier, Andrew said he has obviously gotten to know his neighbors quite well. And he’s done more than just deliver mail — he’s taken garbage out for people, helped the elderly when they needed it and just been there for a quick conversation before moving on to the next house.

There’s also been times when he’s given an old pair of glasses — he’s been with the Lion’s Club for 26 years — or been given a donation for the Little Valley Alumni Association, of which he has been president for 23 years.

Or perhaps they’ll chat with him for a few seconds about the little league girls softball team he coaches in the summer or the time he’s spent as a lay leader at the Little Valley Methodist Church he grew up in. He’s even been known to deliver for Meals on Wheels on his lunch breaks.

“Kevin not only delivers mail, but he serves this community in many other ways,” said Postmaster Angela Ellis. “He is involved in girls little league softball, the Lions Club, Little Valley Alumni and his church as well as provides meals and other services to senior citizens. He is a true caretaker of this town.”

Andrew’s dedication to public service is practically in his blood. As is the case with many small towns, he has a family history in the community he grew up.

His grandfather served as mayor of Little Valley and was actively involved in the fire department, including serving as chief for a number of years. His aunt was a town clerk and his dad, Albert Andrew, served as village clerk for 41 years.

“He was also involved in the fire department and was big in the American Legion and in our church,” said Andrew. “I learned community service from him.”

Being someone who doesn’t shy away from wearing a smile or visiting with his neighbors — which in his case encompasses the entire eight-mile walking route in Little Valley — Andrew repeatedly took civil service tests in the late ‘70s and early ‘80s in an attempt to do what he does today.

“When we were kids, we used to take the old paper grocery bags and we’d put stuff in it and walk around the house with it,” he said. “I always wanted to do it because it seemed like a fun job and a good job.”

With a smile, he added, “I wasn’t really thinking about the winters then, I guess.”

After scoring well on a civil service test and already employed full-time with the street department in the village, Andrew waited until the perfect opportunity with the Postal Service presented itself. When one came up in Little Valley, where he was born and raised, he accepted it.

“They were so shorthanded because they only had two people left,” Andrew recalled. “The postmaster said I had to start on Saturday and it was already Tuesday. So it was real short notice.”

Between his start — including a first day of pouring rain that soaked him to the bone — and today, Andrew has walked tens of thousands of miles. His daily route the last five years is a 7- to 9-mile trek.

For a few days, he borrowed a step tracking device from a friend after someone asked him exactly how many miles he walks daily. The step counter clocked between 17,000 and 19,000 steps each of the three days he wore it.

Do some simple math that includes six days of delivering mail a week and 52 weeks in a year; Andrew likely logs more than 5.6 million steps annually.

“I would not have guessed it was that much,” he admitted.

Whether it’s the fresh air, all those steps, or, as he puts it, “someone has been looking out for me,” Andrew has only called in sick to work five times over those 30 years — with only three of them being for himself.

Most of the time has been spent in Little Valley, but he’s also worked in Salamanca, Kill Buck, South Dayton, Cattaraugus and Olean when needed. But he said nothing beats working in his own hometown.

“It’s that sense of community,” he said. “There’s no place like a small town.”

He admits he has done practically everything at the post office — mowing lawns, shoveling snow and working behind the counter included — but about 80 percent of his time has been spent as a mail carrier. The majority of those years have been in Little Valley.

One of Andrew’s favorite stories is one possible only in a small town — he delivered to the funeral home the ashes of the doctor who delivered him when he was born. That’s back when the names of the deceased were printed on the packaging, he said, which has since changed.

“He delivered me and then I delivered him,” he said with a laugh.

He’s also had stories about falling and having mail fly all over the place and about playing tug-of-war through the mail slot with an eager dog on the other side.

And speaking of dogs, because you were probably wondering…

“I’ve only been bite twice and they haven’t been that terrible,” he said. “I’ve had a couple close calls some other times. I would have had a bad one two or three years ago but thank goodness I had my satchel and the dog was just biting that.”

Then there’s the weather. Andrew, who jokingly said he’s able to work on his tan during the summer, said the walking the job entails keeps him warm during those frigid winter months.

“You can get past the cold — it’s the wind more than the cold,” he said. “If it’s cold you can get warmed up walking. It’s the wind that knocks you back.

“Two Februaries ago was tough,” he admitted, alluding to the infamous February in 2015 when temperatures hovered around zero for days. “If someone would have opened a car door and said, ‘I’m going to Florida,’ I would have jumped right in.”

With 30 years under his belt, Andrew said he’s got at least a couple more years in him and added, “as long as I feel good I would like to stay.”

“I’ve lived here all but eight years and you get to know everybody,” he said. “That’s what makes it great to have this job here — it’s right in my hometown.”