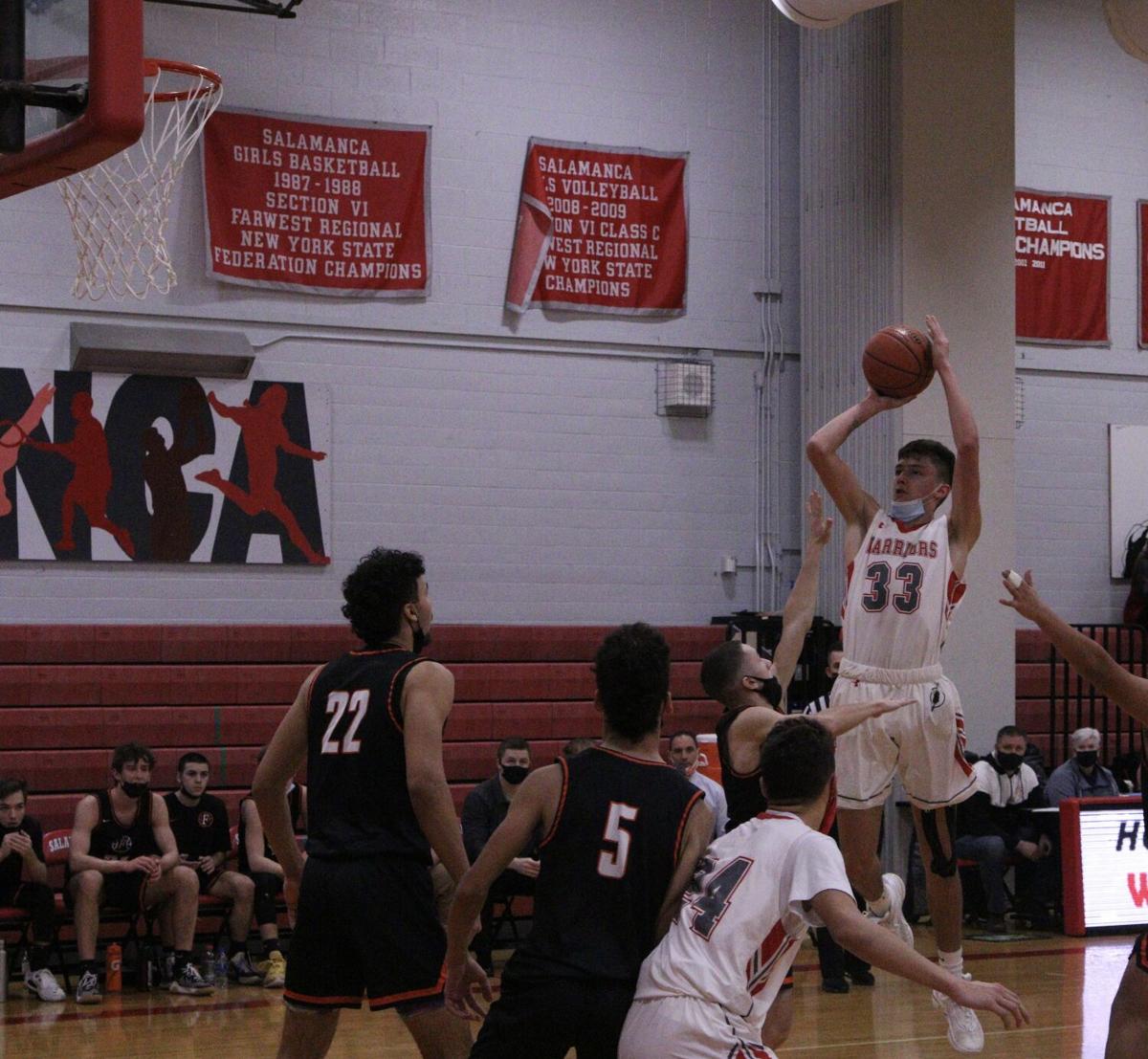 Salamanca’s RJ McLarney (33) pulls up for a mid-range jumper during a CCAA West I boys basketball game against Fredonia on Saturday in Salamanca. 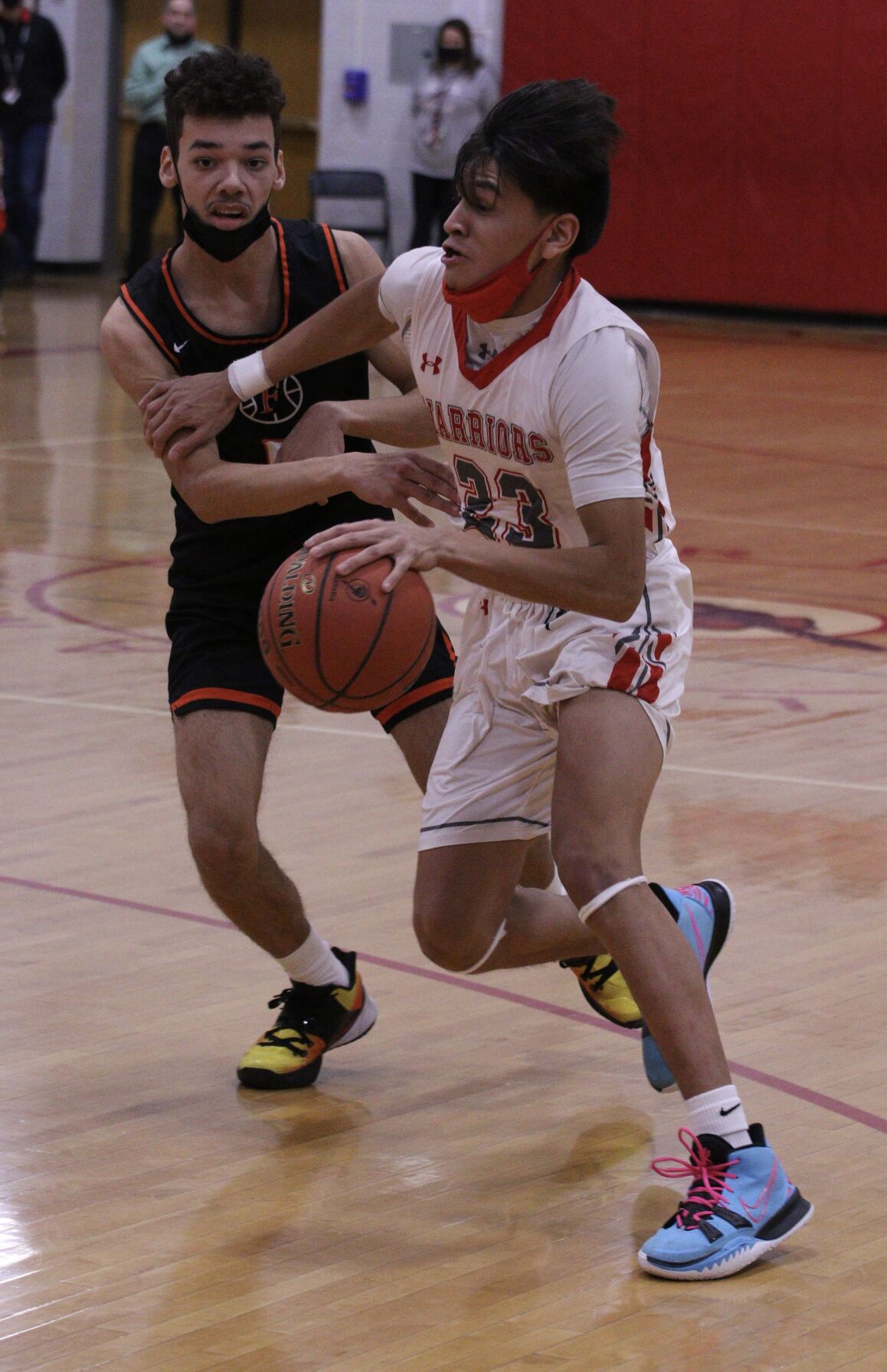 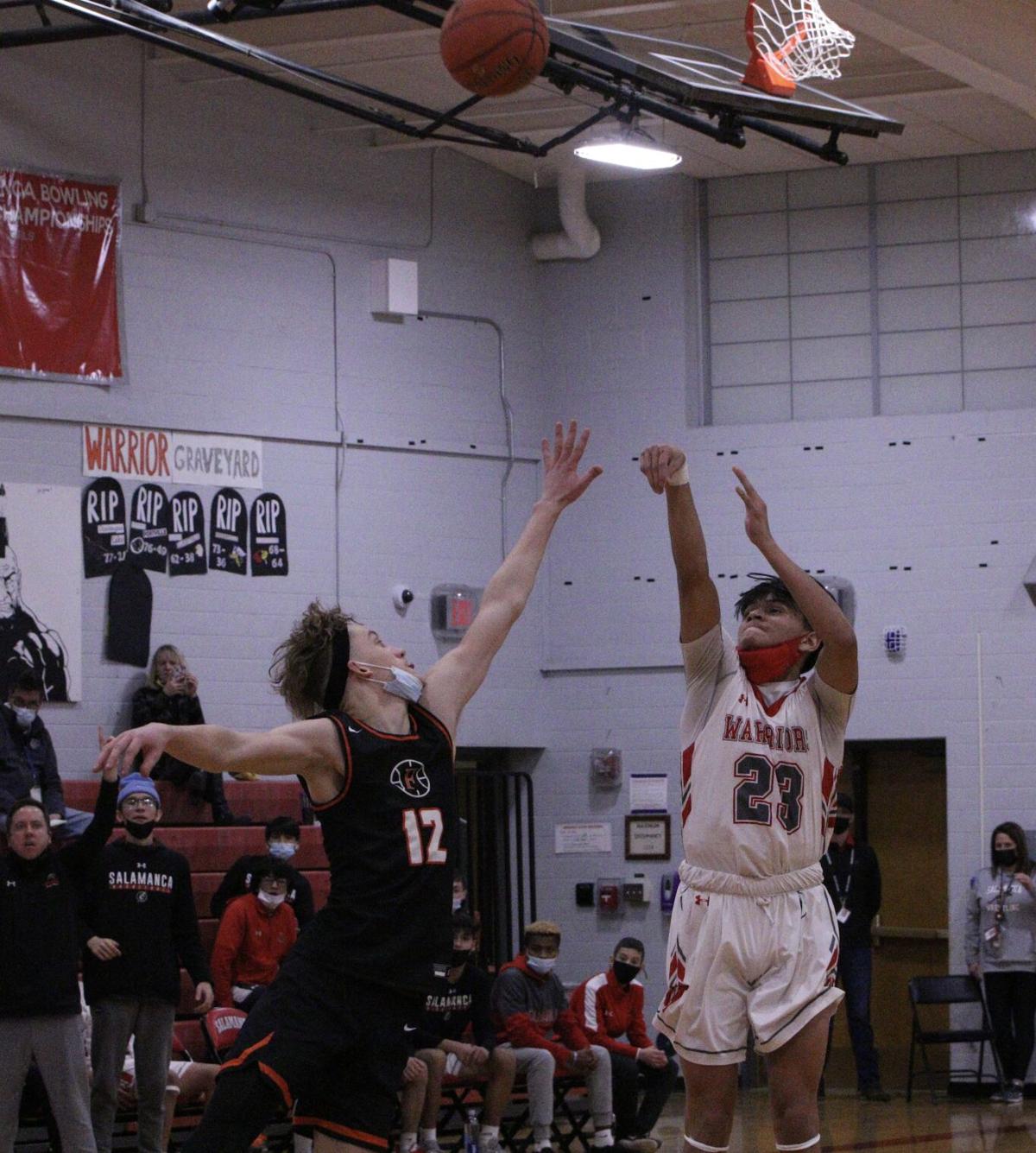 Salamanca’s Lucus Brown (23) gets a shot off over the outstretched arm of Fredonia’s Ethan Fry (12) during a CCAA West I boys basketball game on Saturday in Salamanca. 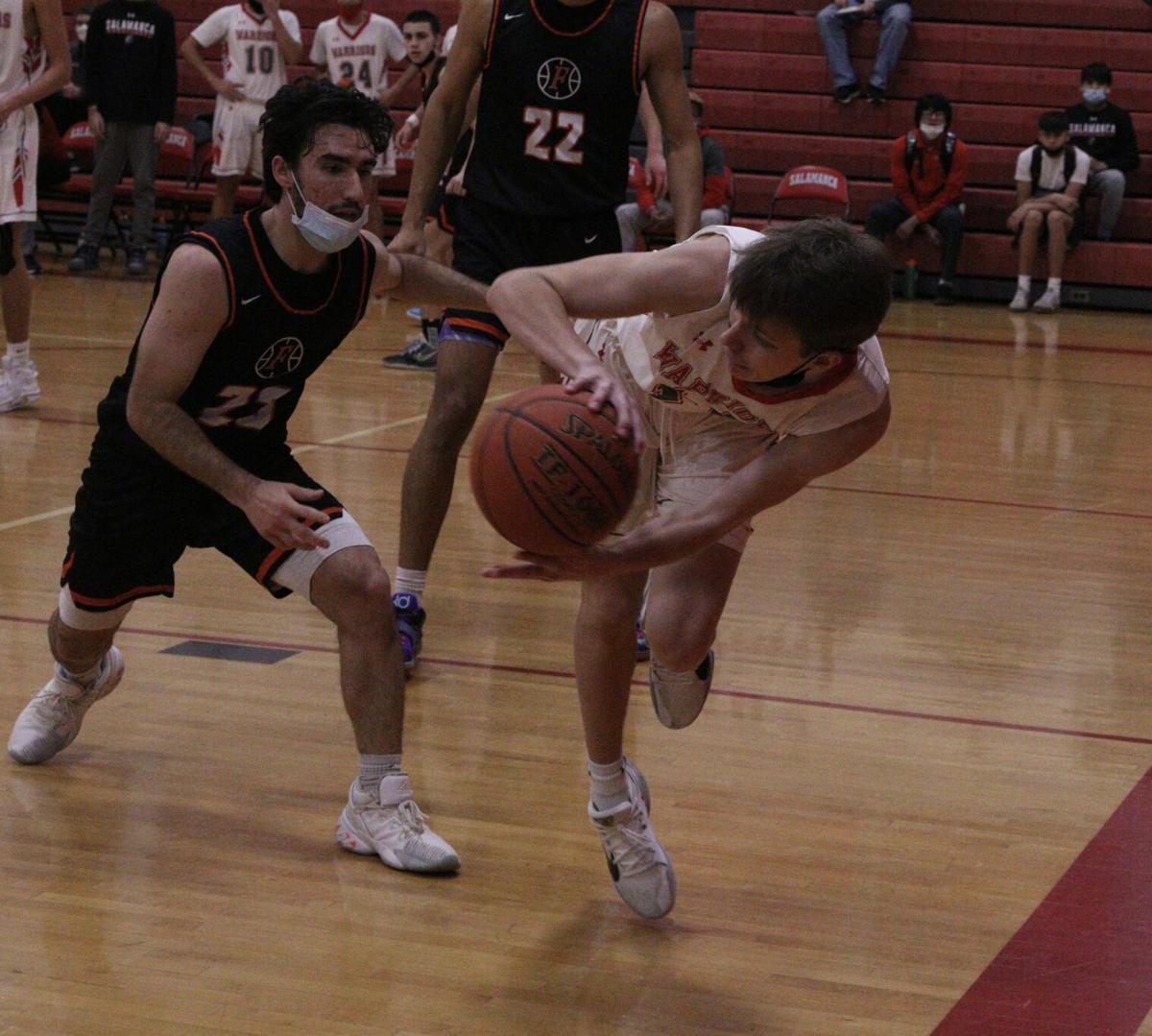 Salamanca’s Cole Hedlund (right) saves a ball from going out of bounds during a CCAA West I boys basketball game against Fredonia on Saturday in Salamanca.

Salamanca’s RJ McLarney (33) pulls up for a mid-range jumper during a CCAA West I boys basketball game against Fredonia on Saturday in Salamanca.

Salamanca’s Lucus Brown (23) gets a shot off over the outstretched arm of Fredonia’s Ethan Fry (12) during a CCAA West I boys basketball game on Saturday in Salamanca.

Salamanca’s Cole Hedlund (right) saves a ball from going out of bounds during a CCAA West I boys basketball game against Fredonia on Saturday in Salamanca.

The Warriors tallied 92 points and made 13 3-pointers, both season-highs, in running away from Fredonia, winning 92-60.

Salamanca’s offense took off in the second quarter: leading 18-17 after the first, the Warriors scored 33 in the second and 26 in the third as part of a 59-30 stretch.

“That's a very good team we just beat,” Salamanca coach Adam Bennett said of Fredonia. “They're very well-coached, they have a ton of size, they're athletic and I just thought our defensive pressure made a real difference, especially in that second quarter. We were able to get steals and press. I thought we played solid defensively in the half court, that allowed us to get out in transition and then our ball movement was great. To have three guys at or near 20 points against a team like that just shows the unselfishness of our guys and it was just a well-rounded effort tonight and a great win for us.”

“We pressured the ball, whether it was in half-court man or in our 1-2-2 press, we fell back into 1-3-1, and I thought the guys did an outstanding job, especially off the ball,” he said. “We were really active, we jumped passing lanes and that allowed us to get out in transition and whether it was an easy one in transition for a layup or an inside-out three, we just kind of got rolling there. And that's hard to do against a team of that caliber, but we had some momentum there. It was really not just all five starters but our bench was fantastic tonight, everybody was involved and obviously that helped us get the result that it did.”

Salamanca split two regular season games with Fredonia last year, a 67-60 loss followed by a 61-60 road win on a Brown buzzer-beater. No late heroics were required this time around however.

“We've got a number of scorers,” Bennett said, “and the difference is that they're inside-out 3's, so we were able to get inside off the bounce or baseline drive down the middle and kick out to shooters that were ready and our guys did a good job offensively of being active away from the ball, lifting into open spaced, being shot ready. But really all of our guys: RJ was outstanding tonight, but Andy Herrick too. Andy had a career high 23 points tonight, but he's turned himself into a three-way scorer: he's a knock-down shooter, he can get into the lane, he was aggressive, he's just becoming a threat at each level of the defense.

“We have to continue to work at it and continue to move the ball the way that we're doing, but the guys trust each other. All five guys we feel like at any given time have the ability to score the ball and I don't think you get to have an offensive performance like that unless there's trust.”

The Warriors entered the week ranked seventh in the state in Class C by the New York State Sports Writers Association and seventh among Western New York small schools by The Buffalo News.

The game was initially scheduled for Thursday, but moved to Saturday due to Fredonia’s weather-related school closure. Salamanca plays again just 48 hours later, taking a trip to Jamestown to play Southwestern Monday night in another West I game.

“We're going to celebrate it tonight, it's a great win for us, but tomorrow our focus turns to Southwestern,” Bennett said. “This league is a bear. They're another good team, it's on their home floor, they're coming off a couple good wins, they're 1-0 in the league. So we have to enjoy this one and make sure that we appreciate the performance tonight but then tomorrow it's right back to work. These guys have that ability that they're all about the next possession, the next game, continuing to get better every day. We played great tonight but there are things that we can do better and we've really got to focus on getting ready for Monday.”