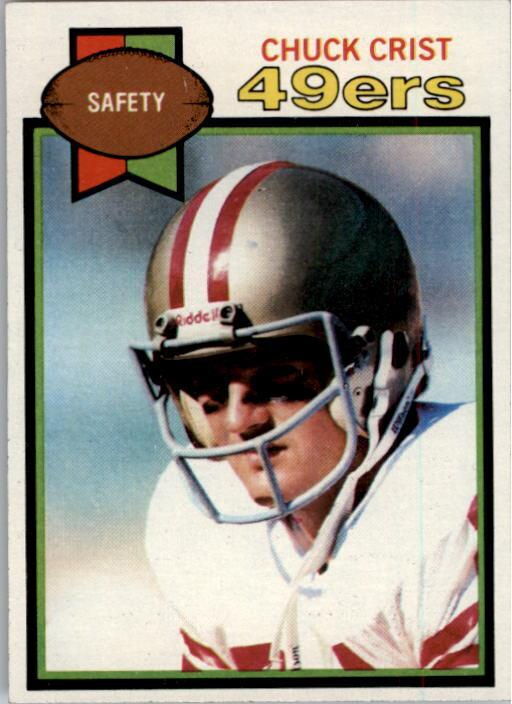 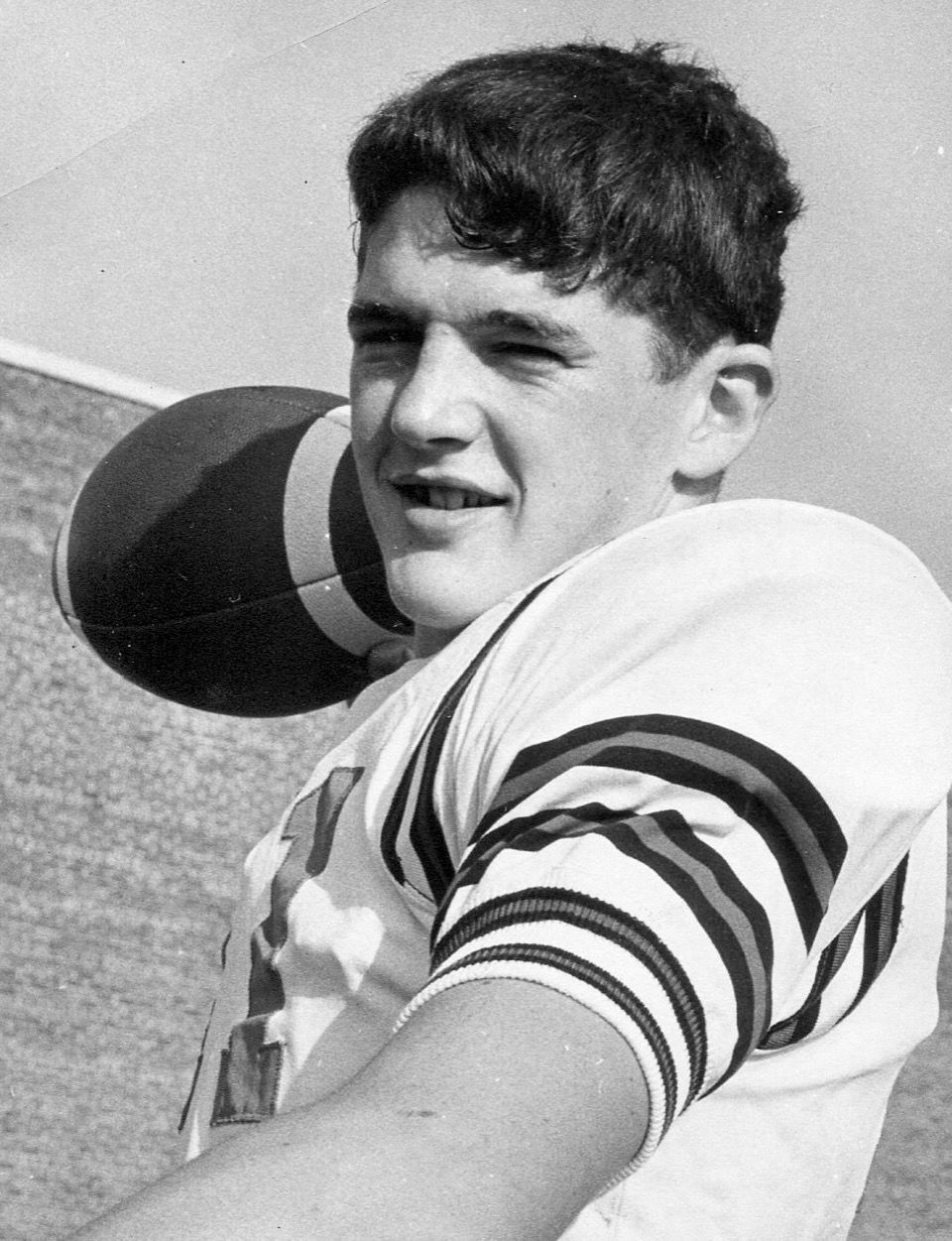 All you need to know about Chuck Crist is that he was the guy who most every boy wants to be.

Upon graduation, Penn State offered Crist (6-foot-2, 220 pounds) his choice of scholarships in either football or basketball. He chose hoops, but after a glittering collegiate career, still missed the “other” sport.

After wheedling a tryout with the Giants, the former Big 30 Player of the Year (he shared the honor with Archbishop Walsh’s Dan Metzler), made the team as an undrafted free agent. Thus began a seven-year career as an NFL safety as he spent three seasons each in New York and New Orleans and one in San Francisco.

He retired after the 1978 campaign, a month short of his 28th birthday, with 20 career interceptions and 11 fumble recoveries in 92 games and having been honored as the Saints’ Defensive MVP in ‘77.

After retiring from pro football, he became one of the Southern Tier’s most talented fast-pitch softball players, but eventually his sport of choice became golf as he won six club championships in the 1990s at Holiday Valley.

Following his playing career, Crist taught two years at Cattaraugus High School, then was at Alfred University as an adjunct professor while also serving as the Saxons’ defensive coordinator plus as an AU assistant basketball coach. Eventually, he was first the high school, then the elementary school principal at Salamanca until he retired.

SO WHY am I writing of him in the past tense?

Chuck passed away, at age 69, early Wednesday morning at the Cleveland Clinic.

The disease that claimed him was aplastic anemia, a rare disorder in which the bone marrow fails to produce an adequate number of blood cells. Only about 750 people are diagnosed with the illness in a given year and it tends to target very young people, particularly Asians, though among its victims have been Eleanor Roosevelt and Marie Curie.

In late September, Crist had a bone marrow transplant from a donor who was a 100% match and he was optimistic for a return to relatively normal health. But the transplant didn’t take and within a month he was on a ventilator and failing quickly.

FOR ME, his passing was both shocking and extremely sad.

My last interaction with him was at the Shootout of Former Champions that preceded the SWNY-NWPA Men’s Amateur at Bartlett Country Club early last August. He and his wife Patti were there to watch their son, Scott, who won the tournament in 2000 and had claimed the Shootout a record-tying three times.

Knowing the roller-coaster nature of his disease and its effect on him, it was gratifying to see Chuck look so fit – he walked some of the six holes Scott played – and be so upbeat about the transplant.

IF ASKED for one word to describe Chuck Crist, my response would be “unpretentious.”

He lived an almost mythical sports career – the Times Herald named him Southern Tier Athlete of the Century in 1999 – and yet, for his entire life, he remained the same soft-spoken, compassionate, unassuming kid he was in high school.

We first met in the spring of 1973, shortly after I started at the OTH, as he was heading into his second season with the Giants. Technically, I already “knew” him, as Mike Abdo and Bob Davies, who hired me, had written so much about Chuck during my radio days in Bradford.

What struck me was his humility. I loved his stories because they weren’t delivered in a “Here’s-what-I-accomplished” context, but rather from a “Do-you-believe-this?” point of view. Even Chuck had a hard time grasping the charmed manner in which his life had unfolded.

BEFORE HE was inducted into the Greater Buffalo Sports Hall of Fame, I wrote a column about him, though the interview was held in odd circumstances. He and Patti were on their way to visit daughter Nikki in North Carolina. She was driving while Chuck talked, though we were interrupted twice as the cell signal was lost in the tunnels of West Virginia.

During that session, he recounted my favorite tale about getting to Penn State as a freshman – they were ineligible to play varsity back then – and having to choose between football and basketball.

“When I was being recruited for football, the only stipulation I had was that I be given a chance to play quarterback and if it didn’t work out, I’d play wherever they wanted,” Crist recalled.

“On the day they issued equipment, I went in and gave my name and position. There were 16 quarterbacks listed … and I wasn’t one of them. Then the guy turned the page and I was listed No. 2 among the defensive backs. I told him, ‘There must be some mistake.’”

He continued, “I went to see Coach (Joe) Paterno and he said, ‘We think you’ll have more success as a defensive back.’ But I told him that wasn’t the deal … that I was supposed to at least get a chance to play quarterback, and if I didn’t, I’d play basketball.

“He wished me luck.”

Of course there was a punchline to the story.

In the midst of his NFL career, Crist remembered, “I ran into Coach Paterno and he said, ‘I told you you’d be better off as a defensive back.’”

The first was a lock, Salamanca nominated him and that ensured his induction. But the Chautauqua and Buffalo Halls are a more complicated process. Nominees are vetted and then voted upon by their respective boards. That Chuck made both of them was a source of tremendous pride and it was manifested by the fact that, in the case of each induction ceremony, he was enduring a tough period with his disease yet willed himself not only to go but also make his speech.

When I last saw him, at the Shootout, he was distracted watching Scott, and I asked Patti, “How did you two meet?”

She laughed and said, “We were in junior high and he came up and asked me out. I said, ‘Come back when you’re taller than me.’

“Over the next year he shot up a couple of inches. He came back and asked again … and I said, ‘OK.’”

And that began a nearly 60-year relationship with the guy who most every boy wanted to be.

(Chuck Pollock, a Times Herald senior sports columnist, can be reached at cpollock@oleantimesherald.com)

Watch Now: Arizona QB Will Plummer has 'come a long way since the start' of spring practice