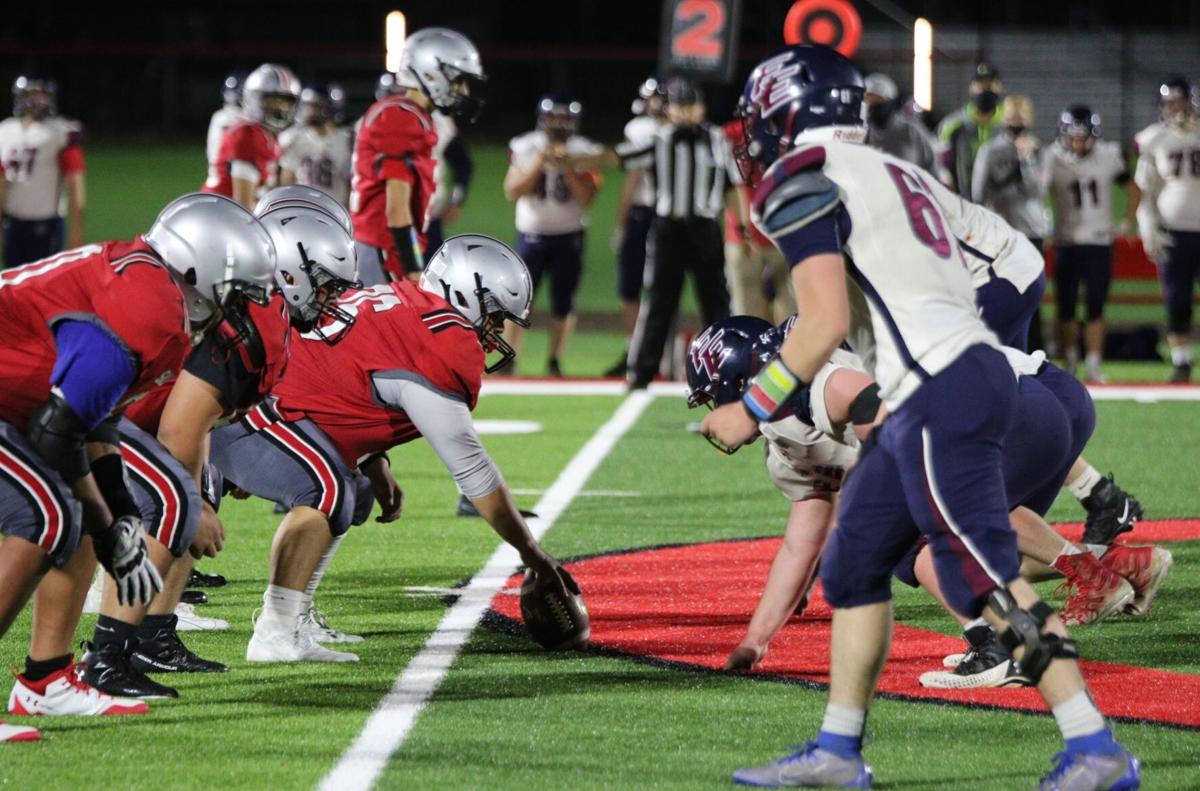 The Salamanca offensive line and Franklinville/Ellicottville defensive line wait for the football to be snapped in a game on April 9 in Salamanca. The two teams are scheduled to meet in the Section 6 Class D championship tonight in Franklinville. 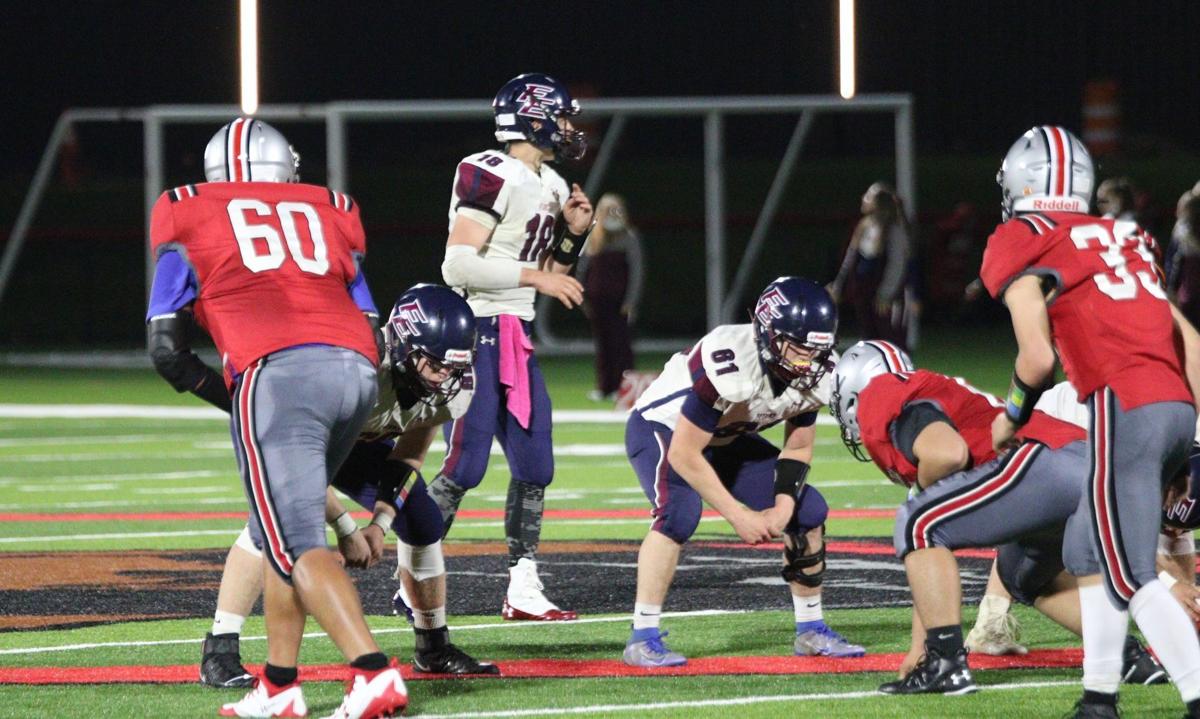 Franklinville/Ellicottville quarterback Logan Frank (18) calls out instructions at the line of scrimmage against Salamanca in a Section 6 Class D game on April 9 in Salamanca.

The Salamanca offensive line and Franklinville/Ellicottville defensive line wait for the football to be snapped in a game on April 9 in Salamanca. The two teams are scheduled to meet in the Section 6 Class D championship tonight in Franklinville.

Franklinville/Ellicottville quarterback Logan Frank (18) calls out instructions at the line of scrimmage against Salamanca in a Section 6 Class D game on April 9 in Salamanca.

The last two Big 30 New York football teams standing, and two of the final 10 teams left in Section 6, Franklinville/Ellicottville and Salamanca have made it to the end of a season unlike any before it.

The Titans and Warriors are set to kick off tonight at 6:30 p.m. in Franklinville to decide the Section 6 Class D championship. One team will be crowned champions, but both know this is the end of the line for the spring (or “Fall II”) football season, pushed back from the fall due to COVID-19, as the NYSPHSAA canceled all state championships this year.

“The kids are really excited,” F/E coach Jason Marsh said. “But it is a unique feeling because generally for us, for everybody, unless you’re playing in the state championship, you’re always fighting for another game. For us, this is as far as we can go, so the kids know that this is it, don’t save anything, put it all out there. This is the last game some of these kids will ever play. They’re excited and definitely looking forward to it.”

Marsh’s counterpart, former F/E coach Chad Bartoszek called this a “special week” for his Warriors. He and his coaching staff didn’t have a strong read before the spring just what his team would look like.

“WE DIDN’T even really know not only were we going to have a season but we didn’t really have a whole lot of contact with our players,” the second-year Salamanca coach said. “We were on full remote for quite a bit of time and we weren’t able to get together and really know what was going on. We had high expectations and I just don’t know with all the COVID that was going on that wins and losses were at the forefront. It was almost like, ‘OK, can we play?’ And then as we started getting through camp, it was like, ‘OK, we’ve got a pretty decent group here.’

“The best part has just been the way the kids have handled it. We’ve had the same group of kids every day and it’s not a huge group, it’s just been a real tough group; attendance-wise we’ve been great and our motto all year long has been ‘earn success,’ we put that on our shirts and everywhere because we really need to put that work in.”

BARTOSZEK is still seeking his first win over his former team, which won twice against Salamanca in 2019. Salamanca had not made a sectional title since 2001, while the Titans have made the sectional final five of the last six seasons, including a win in 2015 in Class D.

No. 3 Salamanca (4-2) earned its spot in the championship by upsetting No. 2 Portville, 6-0, on Sunday in a semifinal. Bartoszek said Portville was a team he pointed to throughout the season as a great one, with his team aiming to get to that level.

“I say that all the time, ‘good, not great,’ and we’re getting there,” he said. “I haven’t really said it in the last few weeks, (there) have been some very important games, playoff-type games that we had to win and you get thrown in the mix against Portville, and that’s a team that I was using as the standard. That’s a great team in our league and to be able to knock them off should give our kids confidence in themselves and what we’re doing. We’re going to need all the confidence we can get to beat F/E on Friday night.”

Top-seeded F/E (6-1), meanwhile, won a 34-8 semifinal over No. 4 Randolph on Friday. After scoring just seven points in each of the Titans’ first two games, F/E has scored totals of 41, 28, 50 and 34 points the last four contests (excluding a forfeit over Maple Grove, technically counted as 20-0). Led by 2019 Big 30 Player of the Year quarterback Logan Frank, F/E has a variety of talented skill position players who could spark a needed big play.

IN WEEK 2, on April 9, F/E won 7-0 at Salamanca. The difference was a 63-yard touchdown run by Frank. Could these teams be headed for another defensive battle?

“The first game was physical and we expect that type of game again,” Marsh said. “Salamanca’s big, they’re strong, they play a physical style of football and we have to match that. Our offense has been playing pretty good the last few weeks, hopefully we can put some points on the board, but you know both teams generally are going to play good defense.”

Salamanca won its semifinal with defense by largely containing Portville star running back Jayden Lassiter to 75 yards on a muddy, snowy field. Stopping another one of the region’s best players, Frank, and the Titans will be a different task.

“Both of us have established strengths,” Bartoszek said. “We’re pretty big, we’re one of the bigger teams, especially up front, and it’s going to be our job offensively and defensively to control the line of scrimmage. I think that goes without saying with our team.

“How they try to exploit that, and how we try to take advantage of (our size) will come down to a few plays here or there. I imagine they’re going to try to get their athletes out in space, try to create some big plays. They’ve also got a pretty big quarterback who they’re going to try to highlight throughout most of the game. He’s as tough as there is, so he’s a huge focal point, big challenge. A different player, (we had a) big challenge last week with Jayden Lassiter, but this week it’s a different type of player. Jayden was physical too but he was the fastest kid on the field. Logan’s got a little bit of that speed but a bunch of the size as well. So he’s going to be tough to manage.”