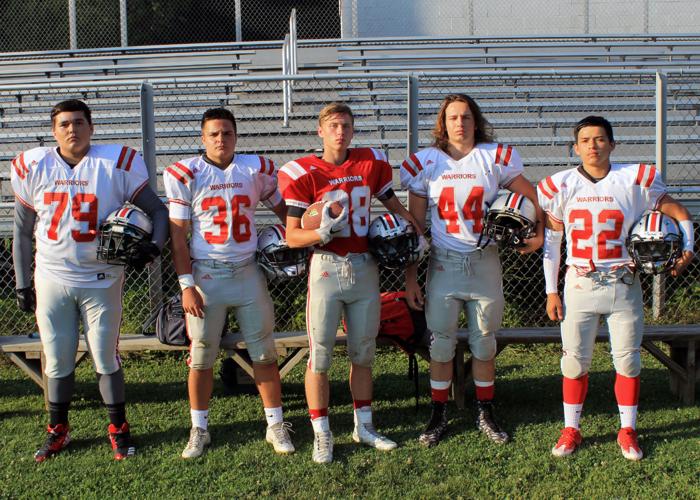 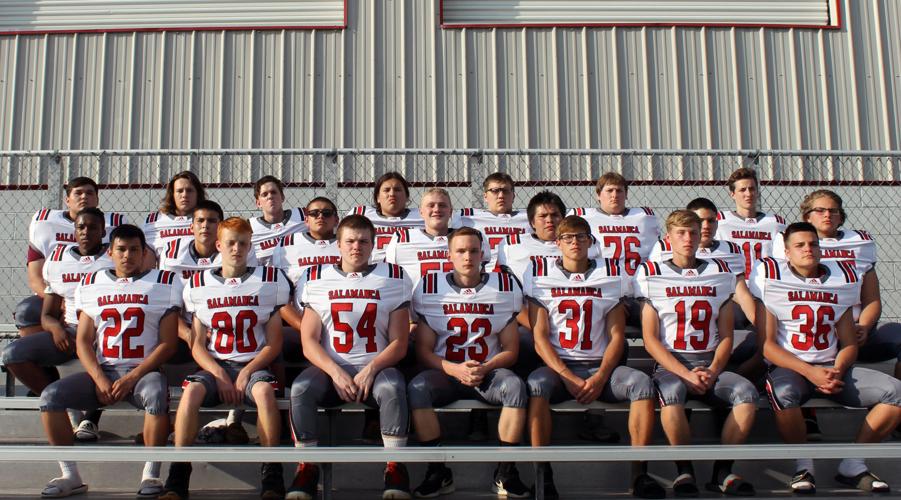 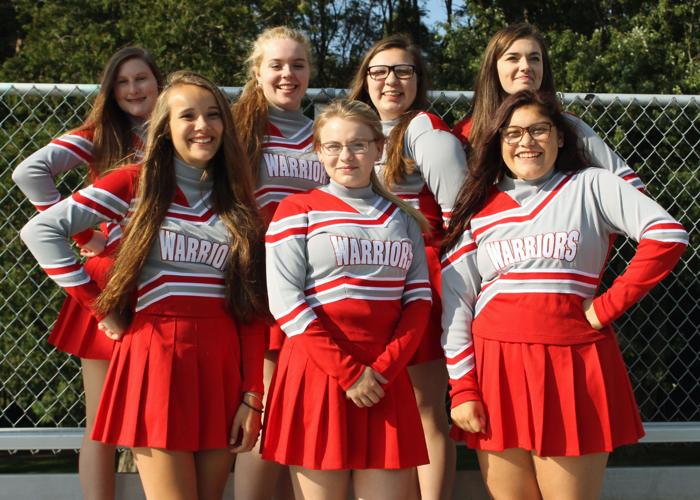 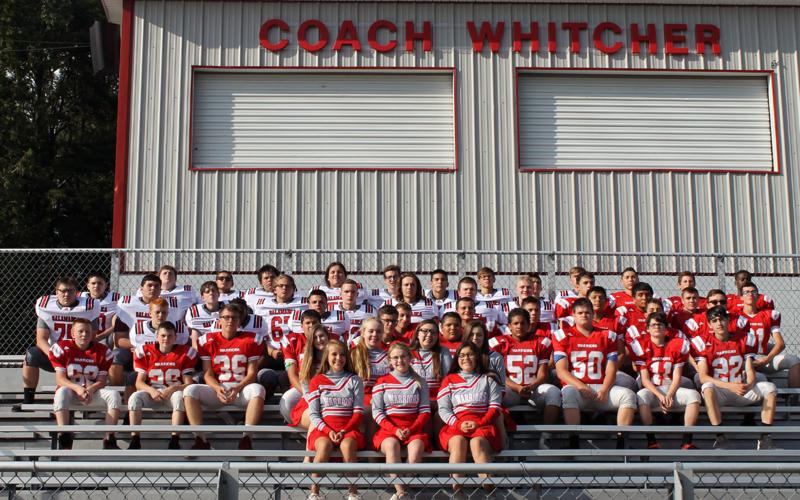 The Salamanca varsity, junior varsity and football cheerleading teams sit in front of the George Whitcher Press Box at Veterans' Park in Salamanca. 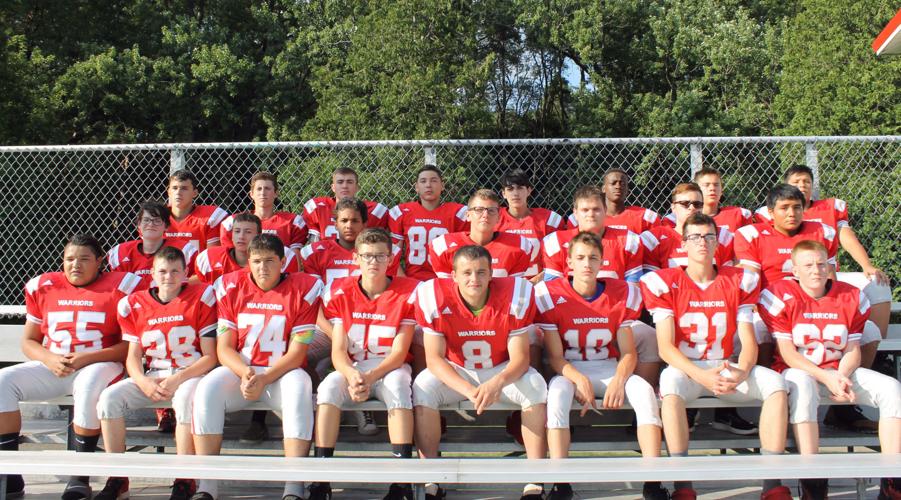 The Salamanca varsity, junior varsity and football cheerleading teams sit in front of the George Whitcher Press Box at Veterans' Park in Salamanca.

But Haley, who played for George Whitcher in 1992 and ‘93, had to rely far more often than he’d like on young, inexperienced athletes in his first two years coaching the SHS varsity.

The results for the Warriors, who returned just four lettermen for Haley’s first season in 2015, suffered, going 0-8 in 2015 and 0-7 in the 2016 regular season until winning a Chuck Funke Memorial Classic Bowl Game over Eden/North Collins, 26-14.

With an 18-game losing streak behind them, the Warriors moved to Class D this season and hope to begin a turnaround with the season opener next Friday at Portville.

Haley credits his 20 returning lettermen for sticking it out through the last year (or two).

“To be able to get up every day and come to practice every day after some of the games that we’ve played, it’s tough,” he said. “It’s easy to pack it in, wait for next year and go home. People nowadays are so quick to, once something gets hard, to walk away. They stuck through it, they kept fighting and showing up to practice every day, worked hard, didn’t always get the results we wanted last year but now this year it’s hopefully time to start getting the results that we’re looking for. I think we’re lucky to be in this situation now because of guys who stuck around the last few years, stepped up, stayed here and played those games that were at times brutal to watch.

“If it weren’t for those guys stepping up and pitching in we’d be Salamanca-slash-something instead of just Salamanca. They’ve carried on the tradition and now it’s time for these guys to step up and get it to the next kids to make their mark and keep Salamanca football going for the long term. They should be proud of that, but it’s time to start believing in themselves.”

“From Day 1 I never even said anything to those kids, they took it upon themselves to lead all the warm-up drills and stuff like that,” he said. “Those three have stepped up, it’s been going good so far.”

The Warriors have some qualities – age, experience, size – they simply lacked in recent years.

“Our depth is something that we haven’t had since (I’ve been) the varsity coach,” Haley said. “Last year we’d have an injury and we were going from seniors to freshmen or sophomores and maturity wasn’t there. This year, we have experienced players and even behind them we have kids that have played varsity football before, they know the system and all of that so you’re not stepping in with someone who is brand new.”

And Haley learned some aspects on the job the last two seasons, admitting he “threw too much” at the young teams. So he and a coaching staff including defensive coordinator Dustin Ross, special teams coach Pat Galante, JV coach Seth Hostuttler and two newcomers, Jerry Parisi and Nick Coronado, have tried a more methodical approach.

“The stuff we ran yesterday, we ran again today and it was sharper today,” Haley said. “Tomorrow we’ll do the same stuff and then add a couple more little wrinkles to it. We’re just going to keep progressing and if we feel like they’re not picking it up like we want, then we’ll back off a little bit and get caught up.

“So far it’s been a lot better and I think part of that is we’ve got experienced varsity players instead of a lot of freshmen and sophomores.”

After seeing some playing time at the end of last season, junior Zariah Armstrong steps into the quarterback role. He’ll have experienced targets including receivers Johnson and junior Tyler Hedlund and tight end Ira John. Siebert, Ball and senior Jeremiah Shoup – who impressed Haley as a sophomore but missed his junior season with a knee injury – should see carries in the backfield.

“We've got too many weapons to just focus on one guy,” Haley said. These guys are going to make plays for us. It's just going to be getting them the ball at the right time, mixing it up and keeping everyone off-balance. I think this year we're going to be able to spread the field a little better which should loosen up everybody. Teams would just cram everybody in the box and we couldn't get out of it. Part of that, what's going to help us is Zariah at quarterback. He's got a very quick release and I think that's going to help us too is him getting rid of it as quick as he does.”

Haley sees a strong crop of football players coming up, with 120 signed up between the Salamanca Sabers peewee, midget and flag football teams and the Warriors’ youth program “not far behind.” But now he want to see the fire that many Salamanca teams once showed return to his team.

“Salamanca teams have always played with their hair on fire, fired up, running around getting hyped up, not being obnoxious,” he said. “If your buddy makes a play you're there high-fiving, hooting and hollering. We haven't seen any of that. That's the one thing we haven't seen yet. I'm hoping it's coming back. It's something you can't really teach, it's something that you've got to have that one kid that just gets you going and you look over to the next guy and now he's fired up. We haven't seen that but once that shows up we'll know we're getting close.”

Of course, before he can talk about wins and end-of-season goals, he wants to see complete, competitive games on Friday nights.

“I would like to start there, not having one quarter where we absolutely self-destruct,” he said, “and I have to tell you, ‘We played good in the third after we gave up a nightmare of a second quarter.’ I want that to clean itself up. I want to play a full four quarters of football from the starting whistle to the final whistle and leave it all out there and not have any letdowns – that would be great – and not do it for one game and not do it for two games, I want a whole season of it and then when we get to that point, we’ll know that we’re stepping in the right direction.

“Right now we’re still where we’re at. It’s time for us to go out there and prove it, prove that we’re here, we’re competitive now.”