Busy Philipps is the first to admit her kids aren’t exactly fans of any of her TV roles. In fact, at this point in their young lives, they have no interest in watching mom onscreen.

“I kind of showed them Girls5eva last year,” the star recalls of her latest series, recently renewed for a second season on Peacock. “I showed them some parts of it. Cricket was just like, ‘You look really weird. And you’re wearing way too much makeup. I don’t like this at all.’ I’m like, ‘OK, I guess this is not for you.’ 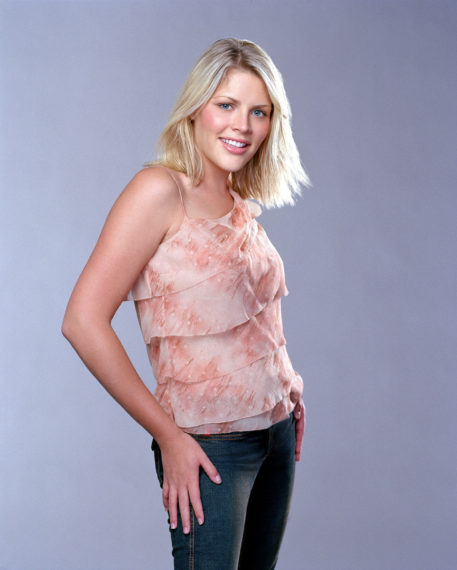 On the surface, the reaction from the kids may come off as a blow — though Philipps can see where they are coming from. She adds, “I mean, would you want to watch your mom making out with [Dawson’s Creek co-star] Josh Jackson? Probably not.”

While Philipps’ offspring may not want to revisit Audrey and Pacey’s romance on the beloved WB drama, many audiences do. It was 20 years ago when viewers were introduced to her character, Joey’s [Katie Holmes] wild child roommate at Worthington University, in Season 5. For Philipps, the fandom of Dawson’s Creek and the one-season wonder Freaks and Geeks remains strong thanks to streaming.

“During the pandemic, within the last year-and-a-half, a lot of younger generations found those shows. It’s awesome,” she notes. “That it can all exist in perpetuity. People continue to find it. In a way, you can say I’m still 19 years old. So that’s great I guess.”

In the age of revivals and reboots, Philipps can see the creative potential of taking a trip back — not necessarily to Capeside, but to Chippewa.

“…I missed the Friends reunion. I think any of those shows would be amazing to go [back to for a reunion], especially because so many people are watching them now. It’s always fun to see casts get together.” Philipps amassed a nice resume in the last two decades including a critically acclaimed turn as Laurie Keller on Cougar Town and hosting the sadly short-lived Busy Tonight. These days, Girls5eva has her busy, and she’s loving it.

“We are just a couple of episodes into filming Season 2. The show is ridiculous and so fun and the music is so good,” she says. We’re all just happy to be there. It’s the best job I’ve had in my entire life.”

She also finds joy hanging with the family and working on passion projects like writing and sharing a little conversation with pal Caissie St. Onge on the Busy Philipps is Doing Her Best podcast.

As for the future? “If Tina Fey just continues to ask me to be in things I’ll show up for anything she wants me to be in,” she quips. “I do a lot of different things. I find the right thing always finds you.”