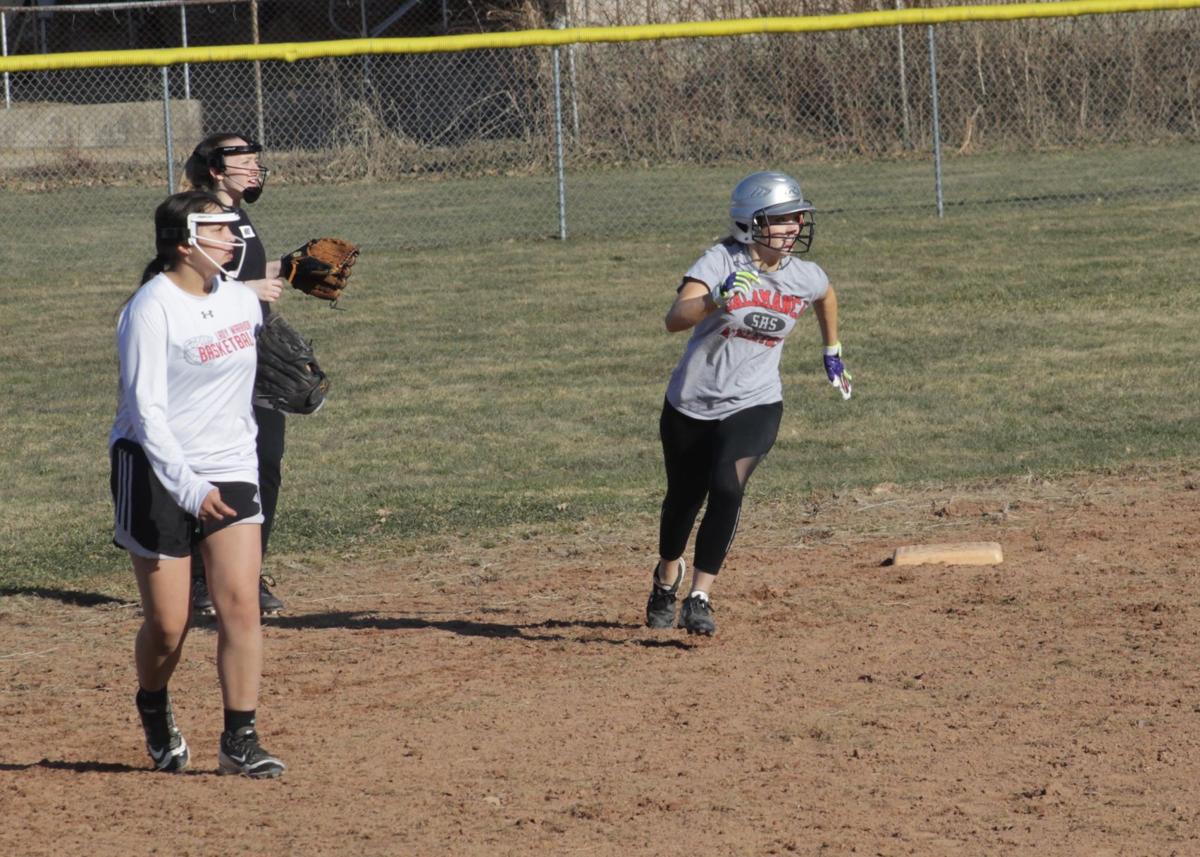 Junior Emma Fiske rounds second base during a recent practice for the Salamanca softball team. 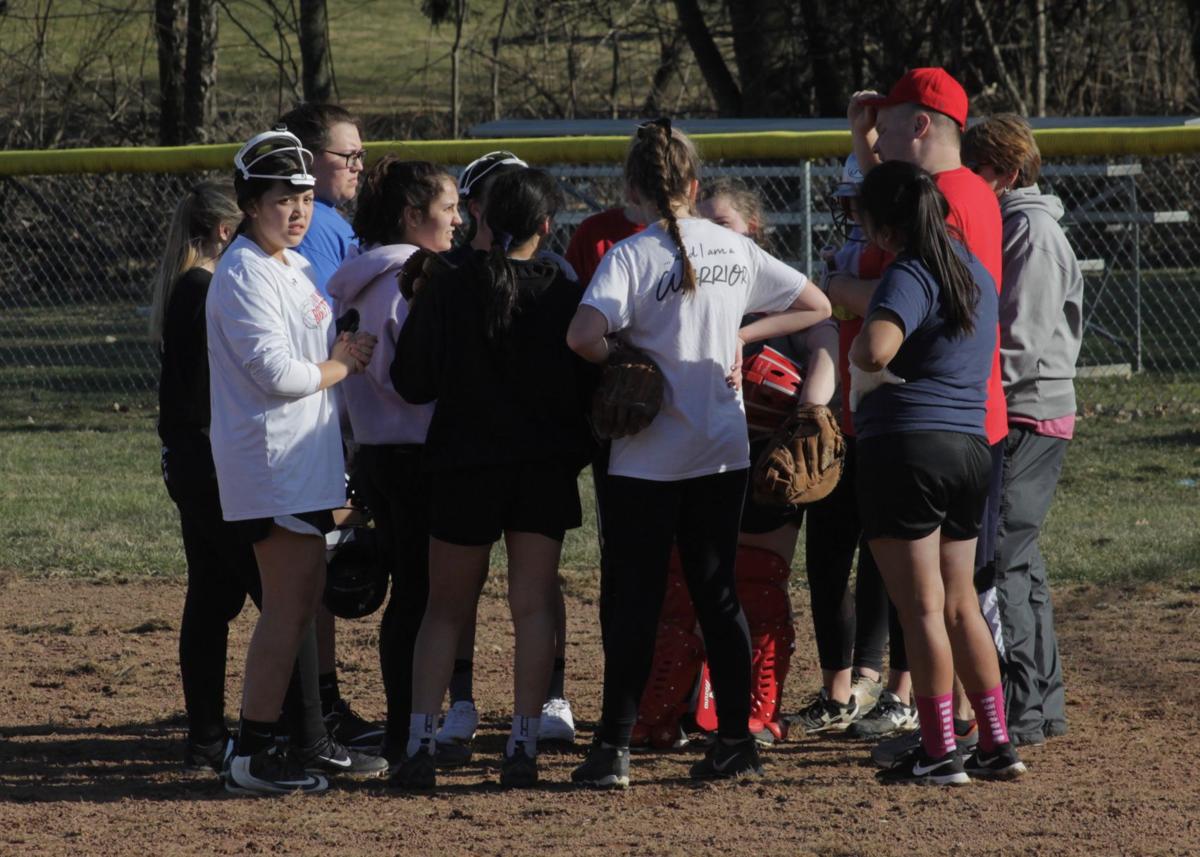 The Salamanca varsity softball team huddles after a practice on the field outside Prospect Elementary School. 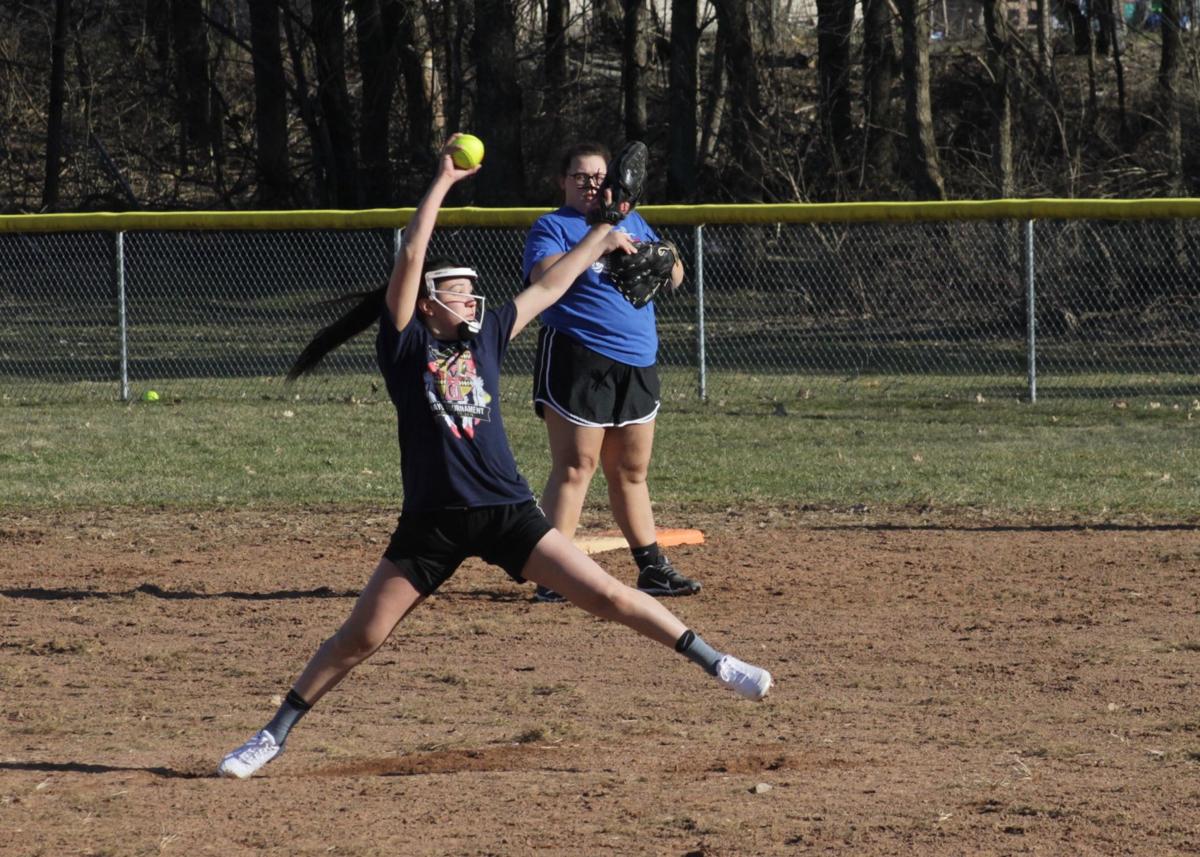 Freshman Emma Brown winds up to pitch during a recent practice for the Salamanca softball team.

Junior Emma Fiske rounds second base during a recent practice for the Salamanca softball team.

The Salamanca varsity softball team huddles after a practice on the field outside Prospect Elementary School.

Freshman Emma Brown winds up to pitch during a recent practice for the Salamanca softball team.

SALAMANCA — After a couple seasons on the varsity level, necessity pushed Emma Fiske and Jordan Ray into leadership roles for the Salamanca softball team. But second-year coach Keith Jones is confident his two most experienced players are ready to lead as junior captains.

Ray and Fiske will likely start the season at catcher and second base, respectively, for the Warriors, who return four varsity players to a team Jones admits is young and inexperienced.

“I think they're looking good,” Jones said of his team. “Our numbers are up, we have 19 girls signed up, we've got 15 that show up regularly and the reason I say regularly (is) we have a couple that are dual-sporting so we have a lacrosse player and a couple track runners. They're splitting time with the other sports.

“We're young, we have one senior, three or four juniors, one sophomore and then the rest are freshmen (and) I have an eighth grader and a seventh grader. So we're extremely young being that we don't have JV.”

After Salamanca’s season closed at 3-12 last spring, Jones knew who he’d turn to as captains this year.

“They do a lot in the offseason, they're really good with the girls, getting them motivated,” he said. “They're great captains. I knew at the end of last year that they're going to be my captains this year pretty much.”

Despite the team’s youth, Fiske has a positive outlook on the season.

“I'm really excited,” she said. “I think that we have a lot of great skill on the team.”

Both captains expressed gratitude for the chance to lead the team.

“It meant a lot,” said Fiske. “We've been on the team, this is our third year on the team, and we've always been the youngest so it's nice that we're the oldest ones and we can be captains.”

“Softball has always been my favorite sport throughout school,” Ray added, “so just for (Coach Jones) to tell us that we were captains, because I've been growing up doing softball, it really does mean a lot, especially because when there's people on the same team the same age as you or even older than you, for him to recognize you as a captain, it shows that people are recognizing you as a leader and that you're responsible.”

The team’s other two returners are freshman Emma Brown, who Jones said is his likely top pitcher (followed by Fiske) and can also play third base or shortstop, and the lone senior, Lauren Stoltz, who plays infield and doubles with track.

The Warriors have three juniors: Fiske, Ray and Anna Isaac (OF). Krystal Victor-Nosie (OF) and Makayla Burch (IF) are the lone sophomores, while Kierstyn Klahn (OF), Morgan Maybee (OF), Kaihalla George (1B), Jillian Rea (OF), Myra Breazeale (IF), Chloe Holleran (OF), Alex Richetts (OF) and Emma Brown make up the freshman class. Outfielders Makenzie Oakes and Emily Brown made the team as eighth and seventh graders, respectively.

“A lot of it, the big thing is, just getting the team to jell a little bit,” Jones noted. “We're young, we're kind of inexperienced, so I think we're going to improve a ton from the beginning of the year 'til the end of the year.”

In the CCAA East I division, Salamanca will face Portville, Olean, Randolph and Gowanda each twice this season. Then the Warriors are classified in C-2 for sectionals.

Baseball and softball teams in the area have mostly enjoyed a better spring than a year ago just by getting out to practice in the sun more often.

“We got out maybe four practices outside during the season last year,” Jones said. “After game cancellations and everything that takes place, (we were) practicing a little bit here and there.

“We did a little bit (in the offseason),” he also noted. “We didn't have a team per se in Salamanca, but the kids are playing out at other places, some are playing in Olean, some are playing (with an) Ellicottville team, so a few of them, and I have a couple that are even playing indoor now, just finishing up.”

But Jones expected a “good test” from the team’s season opener against Randolph, which was postponed from Monday to Tuesday this week. Early on, he wants to see if the team can “click” together.

“It's important because I think the better click, I think the better you get,” he said. “But I like the core that we have this year. Last year it was different, me being the newcomer, there was a little bit of separation on the team last year and I feel we're getting along a lot better and we're playing together a lot better this year already. So I think it's going to be good.”