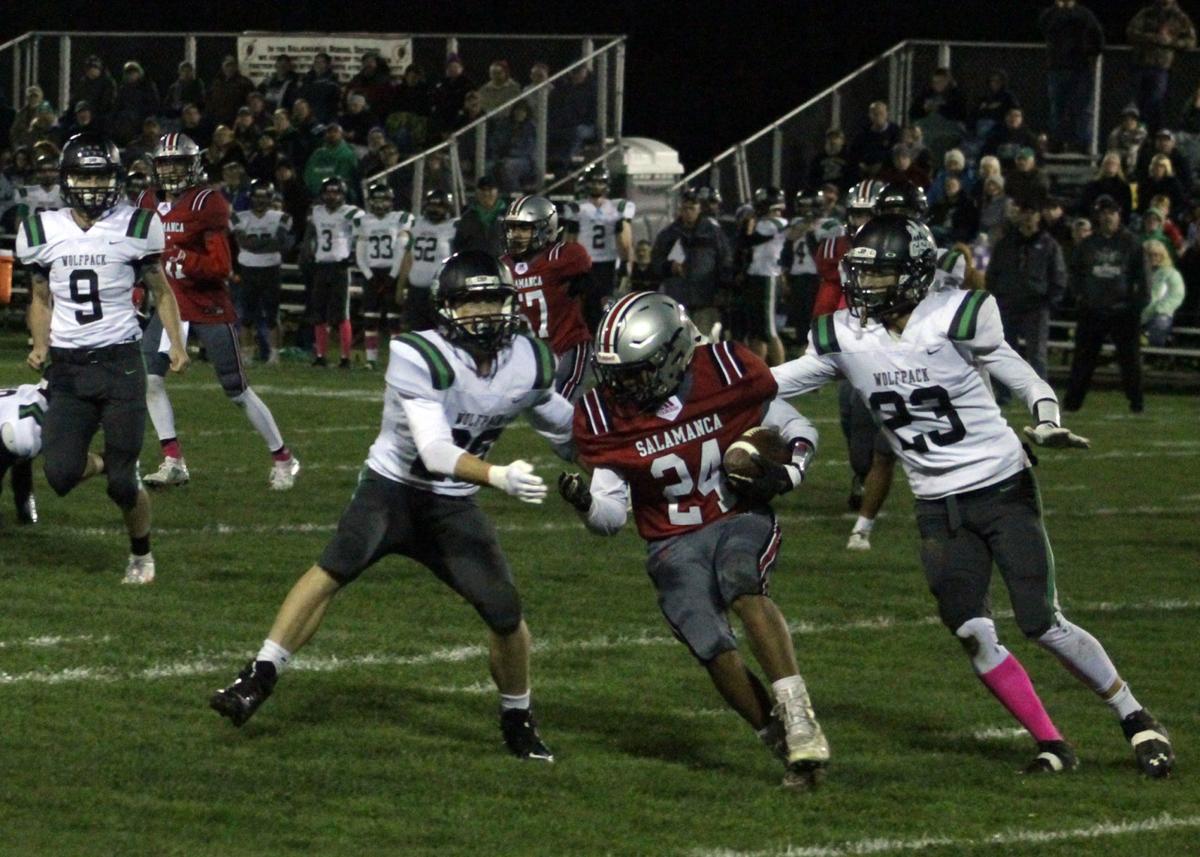 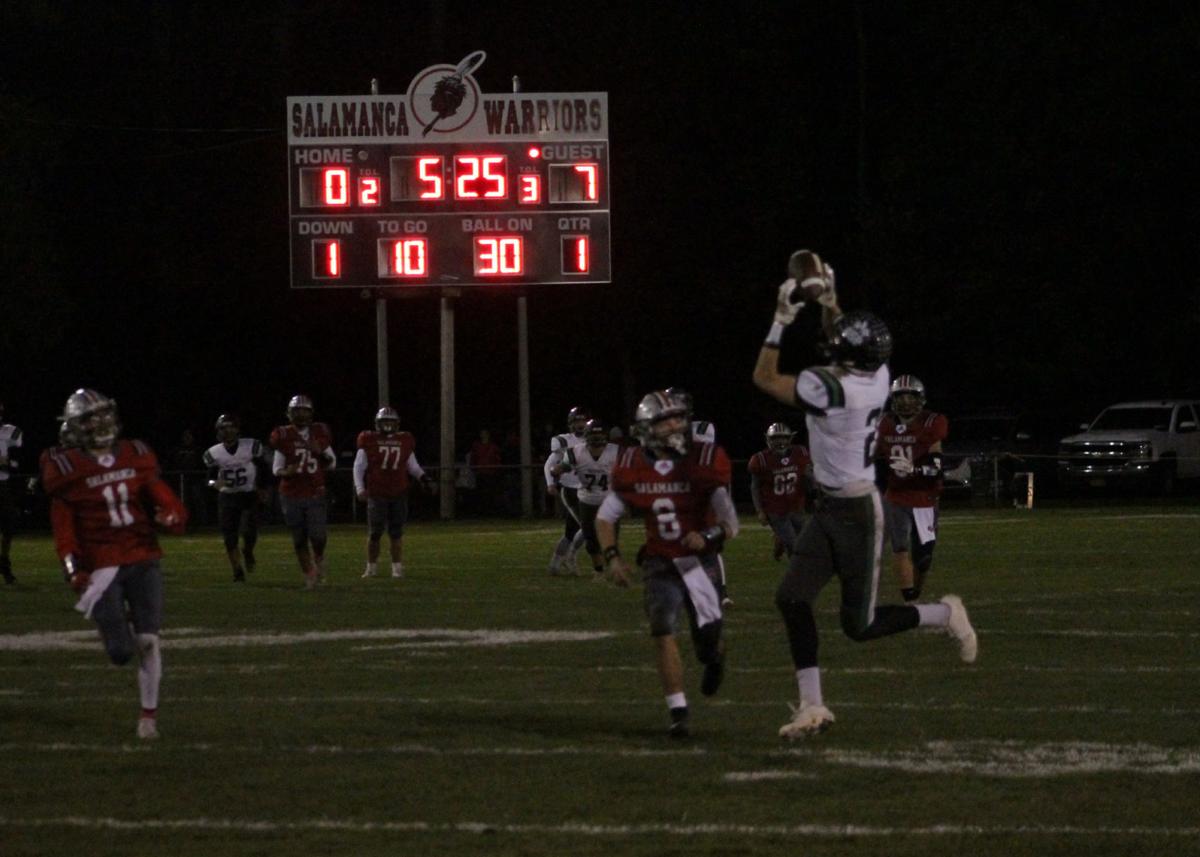 Clymer/Sherman/Panama’s Cameron Barmore (2) makes a catch for a long gain in the first quarter of a Section 6 Class D football game against Salamanca on Friday night at Veterans Memorial Park. 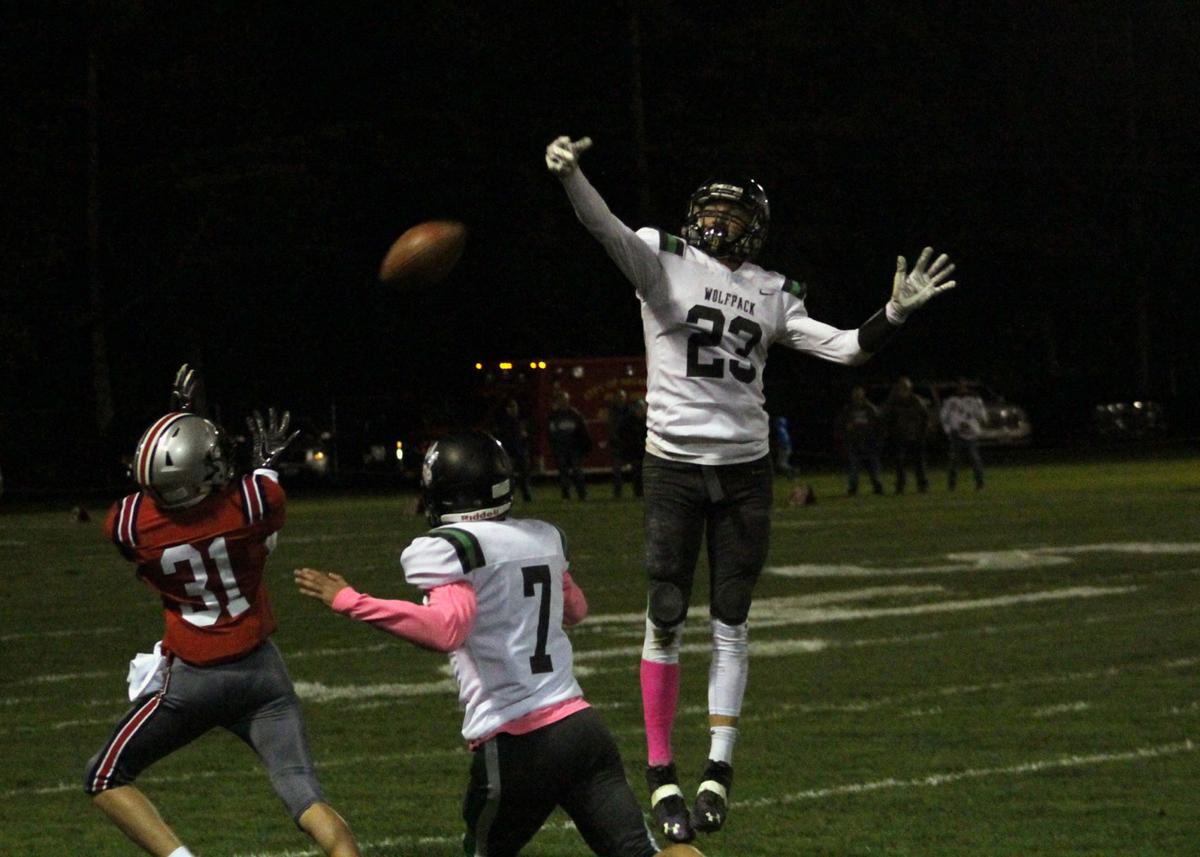 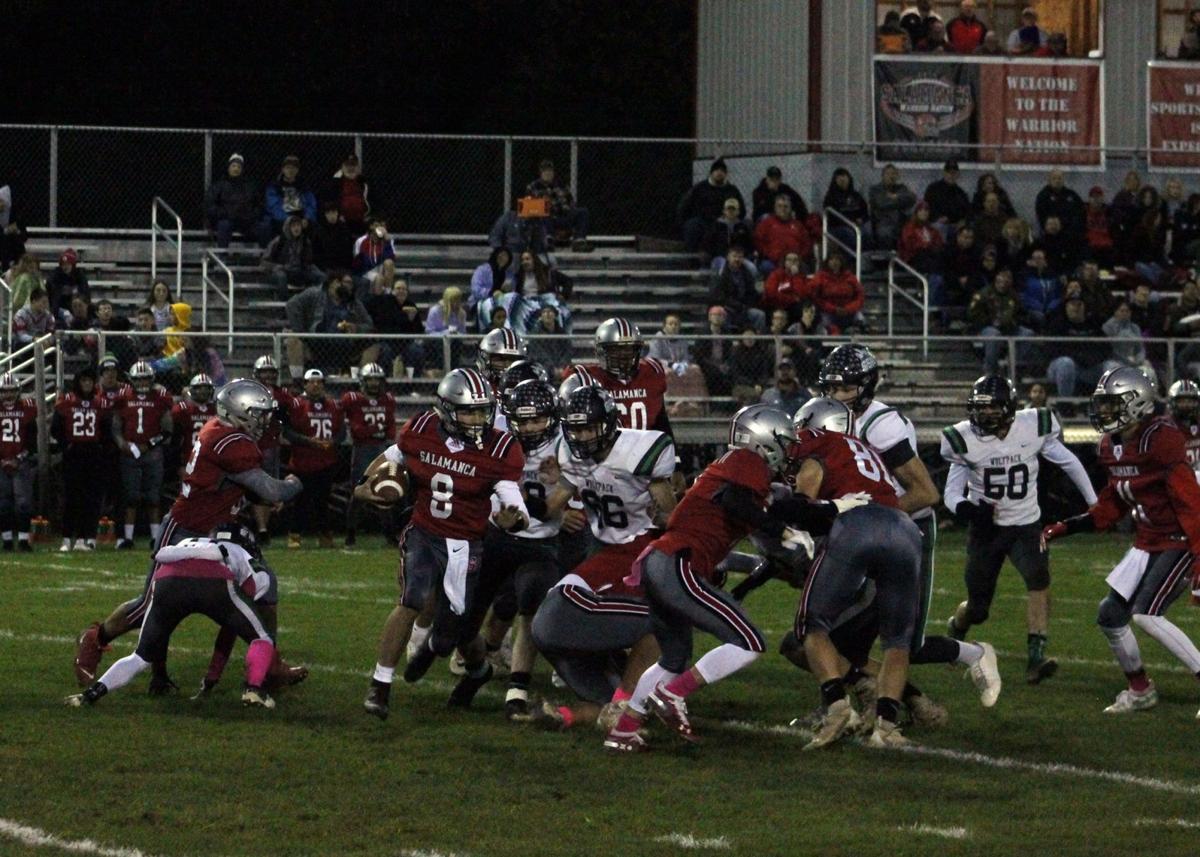 Salamanca’s Lucas McKenna (8) looks for room behind the offensive line against Clymer/Sherman/Panama.

Clymer/Sherman/Panama’s Cameron Barmore (2) makes a catch for a long gain in the first quarter of a Section 6 Class D football game against Salamanca on Friday night at Veterans Memorial Park.

Salamanca’s Lucas McKenna (8) looks for room behind the offensive line against Clymer/Sherman/Panama.

SALAMANCA — Even with a blemish on their record, the last two weeks have suggested the defending Class D state champions don’t plan on going away quietly.

Clymer/Sherman/Panama posted its second straight shutout victory on Friday, toppling Salamanca 40-0 on the road at Veterans Memorial Park. Quarterback Gerrit Hinsdale, receiver Cameron Barmore and a balanced rushing attack gave the Wolfpack a potent offense that built a 34-0 halftime lead on the Warriors and the CSP defense led the way the rest of the night.

Since losing to Franklinville/Ellicottville in Week 3, 24-8, the Wolfpack have won two straight by a combined score of 88-0, beating Cattaraugus-Little Valley last Saturday.

“I think any time you lose it’s a valuable learning experience,” said CSP coach Ty Harper, whose team won the state title 26-6 over Moravian last November. “Replacing so many key players from last year’s team, I think that we’ve got a lot of young guys that are learning about varsity football. I think our inexperience showed that night and we’re just focused on getting better every week. I think sometimes when you lose, it can be good for you as long as you learn from it and improve going forward and we just need to keep doing that.”

Hinsdale completed 9 of his 12 passing attempts for 162 yards and three touchdowns, with his main target, Barmore, collecting five catches for 107 yards and a score.

Connor Cooper led the CSP rushing attack with eight carries for 77 yards and two touchdowns, while John Swabik had a rushing and receiving touchdown.

Harper put in mostly second-string offensive and defensive units after the first drives of the second half, securing a 40-point lead.

“I think our guys came out and executed pretty well for us in the first half,” he said. “I have a lot of respect for (Salamanca) coach (Chad) Bartoszek and what he’s building over here. We’ve seen film on these guys obviously and I know they’re young in some spots. I think in a couple years or probably even sooner they’re going to be pretty tough, so we wanted to really put an emphasis on starting well. It’s a tough place to play, so we were pleased with that first half.”

As lopsided as CSP’s last two games have been, Salamanca’s have been so in the opposite direction. The Warriors haven’t scored since Week 3 against Gowanda after losing to Portville 52-0.

“It’s just a bad loss,” Bartoszek said. “There’s not a ton of ways around it. CSP is a few steps ahead of us in terms of where they’re at and football can be cyclical. It starts snowballing and it gets out of hand and we lost a couple bodies again here or there and we as a coaching staff, we’re working hard to try to be prepared, to try to put ourselves in position. It’s on us to make sure they’re ready and each week, these weeks can weigh on you. We’re trying to stay as upbeat as possible but it’s hard when you’re getting rolled up pretty good. There’s not a lot of positives tonight to be honest.”

Salamanca gained just 40 yards in the first half as CSP built its big lead and finished the game with three drive-killing turnovers.

"They have two really athletic D-ends," Bartoszek said of CSP. "We had a little more trouble kicking them out, controlling them than I thought we would. We had some holes at times and we'd get a couple first downs, but then we'd shoot ourselves in the foot. But we're just not playing at a level that's going to be successful right now. Part of that is on us as a program and the other part is that we've played two really good football teams."