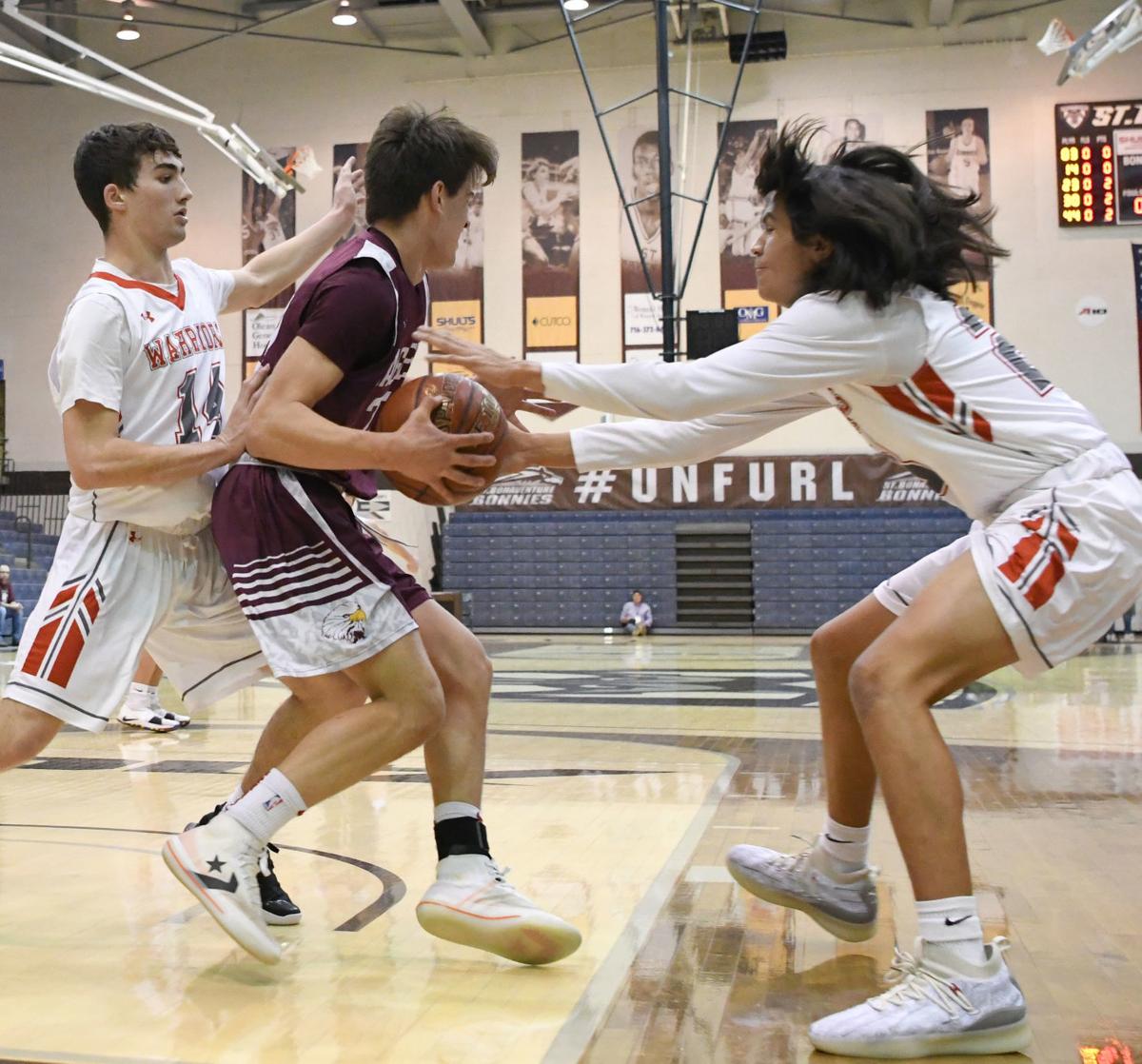 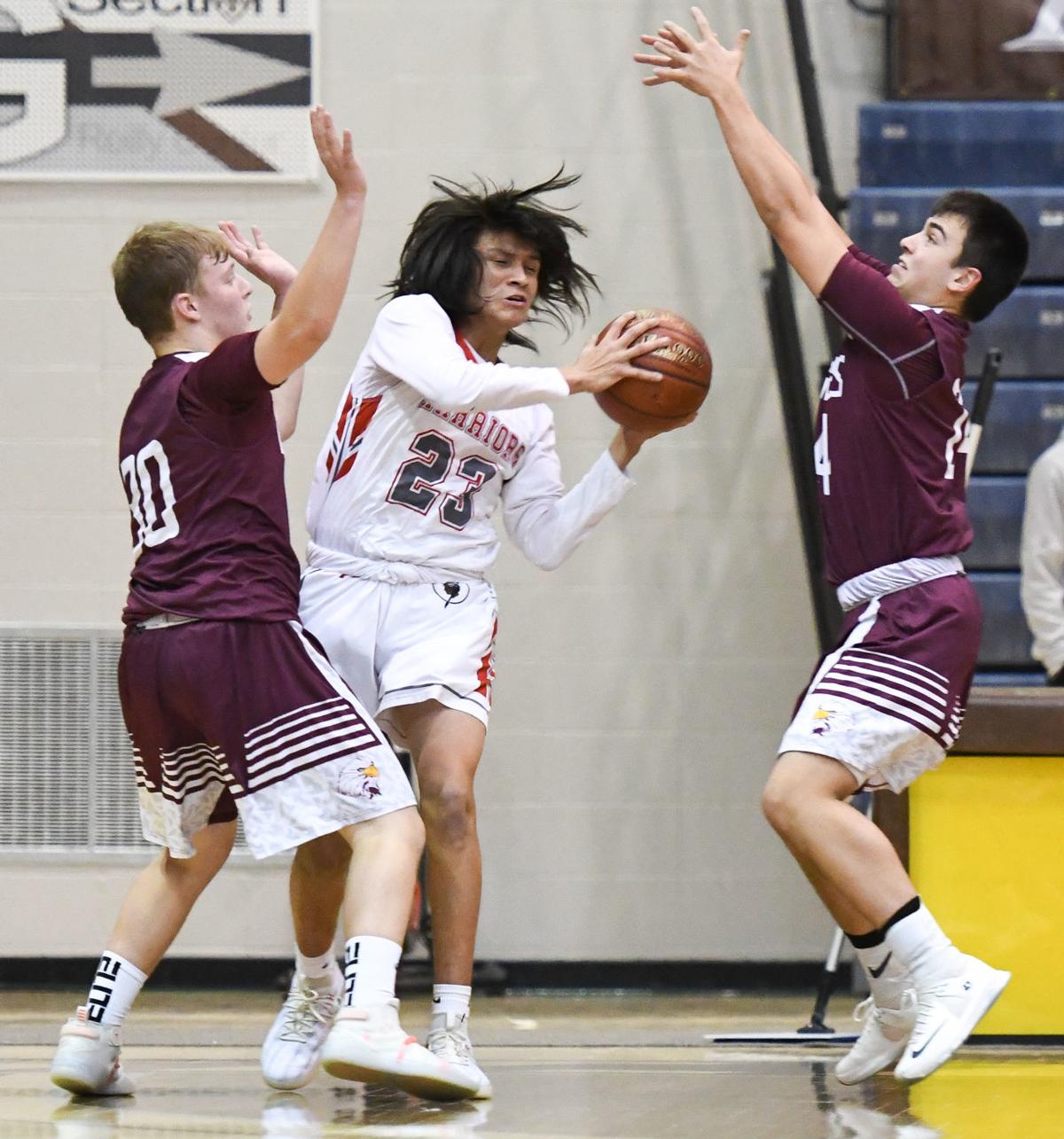 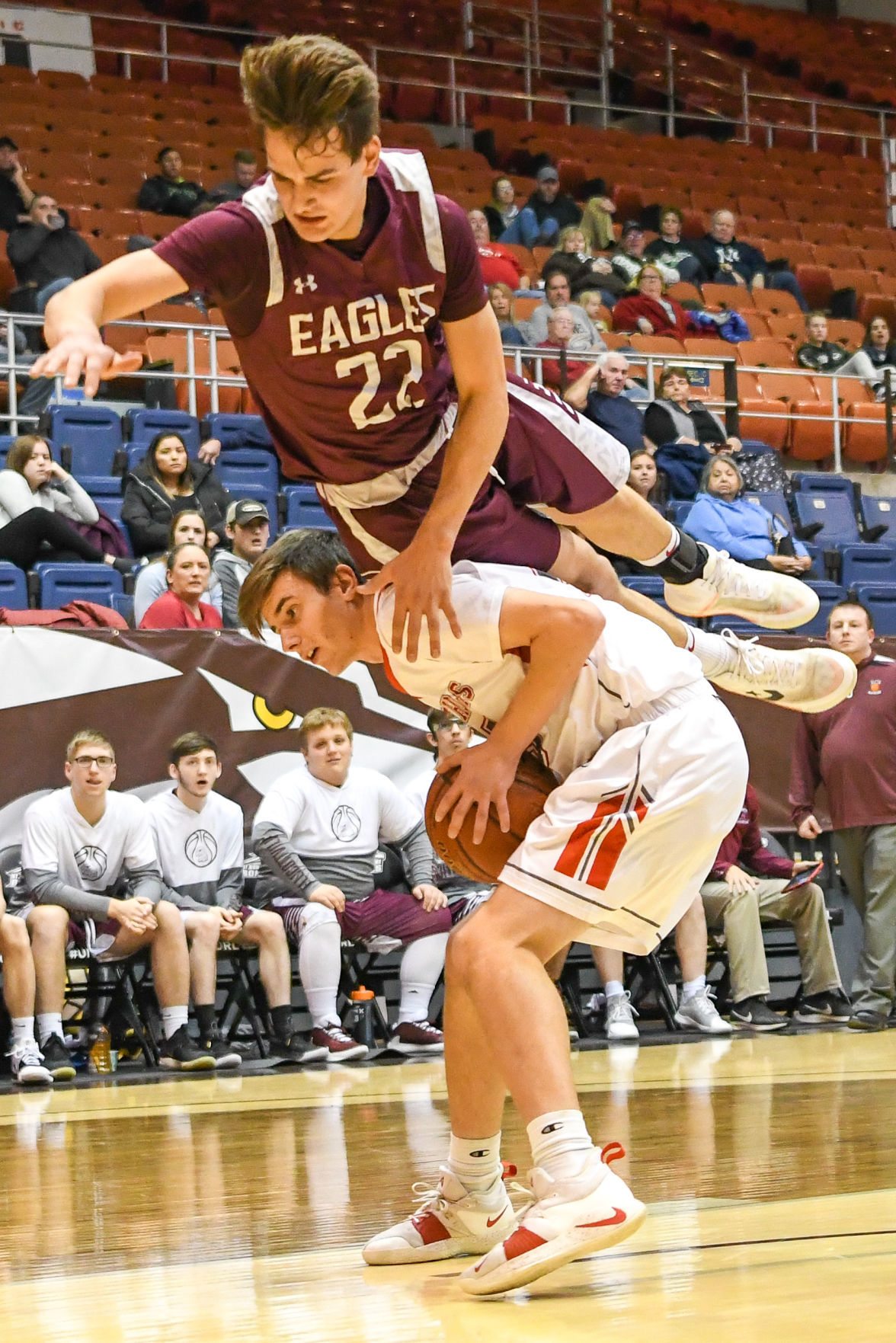 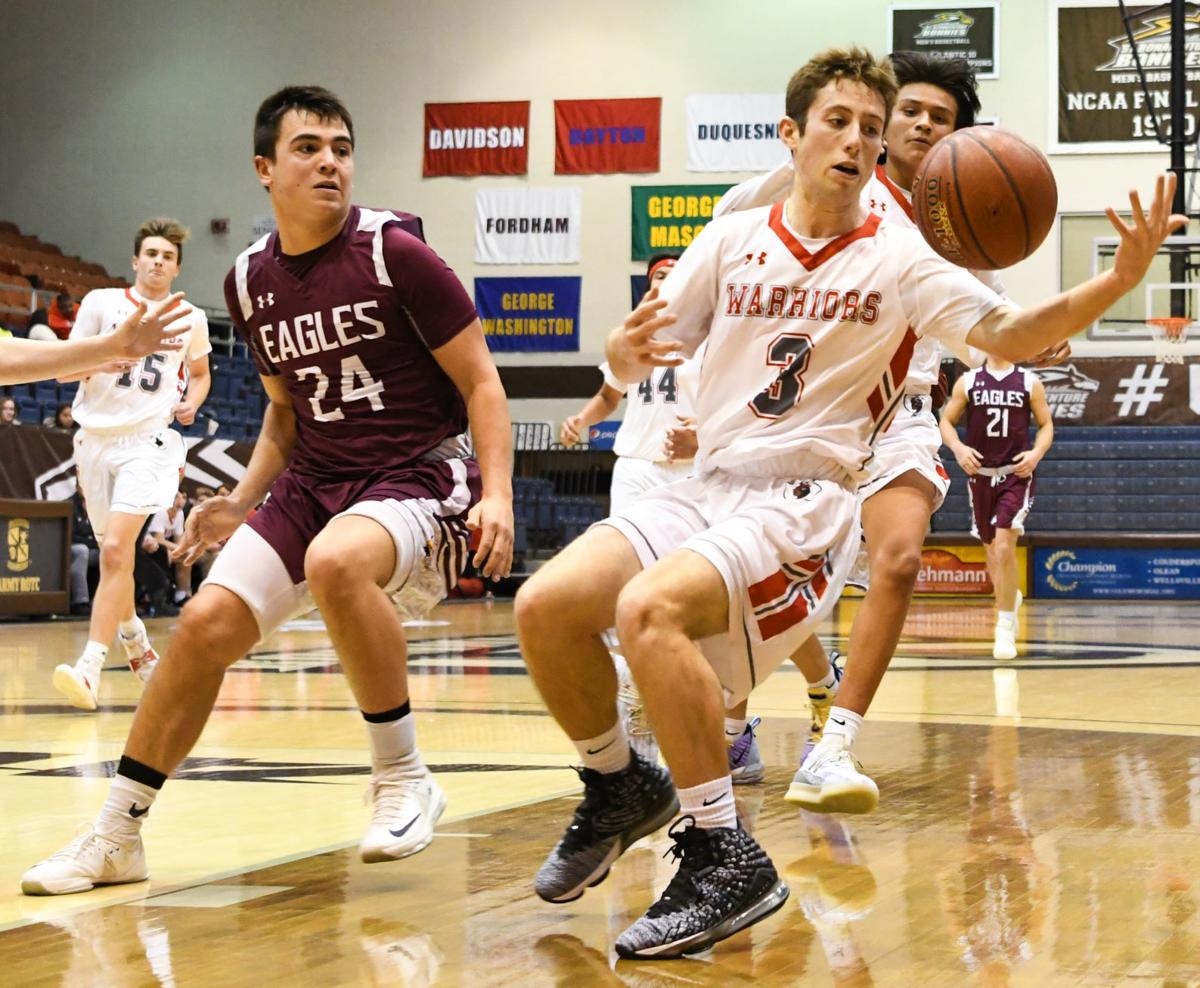 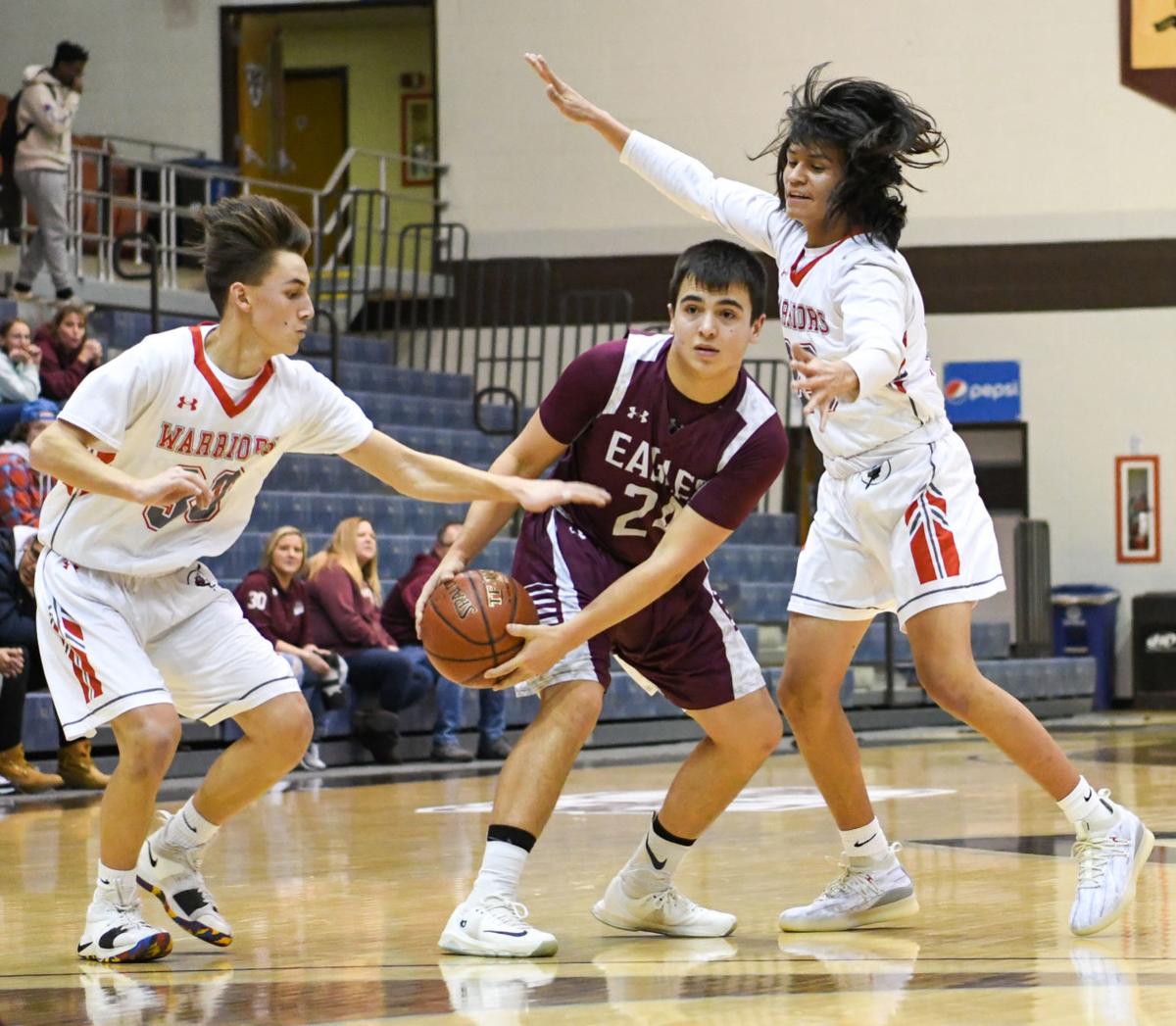 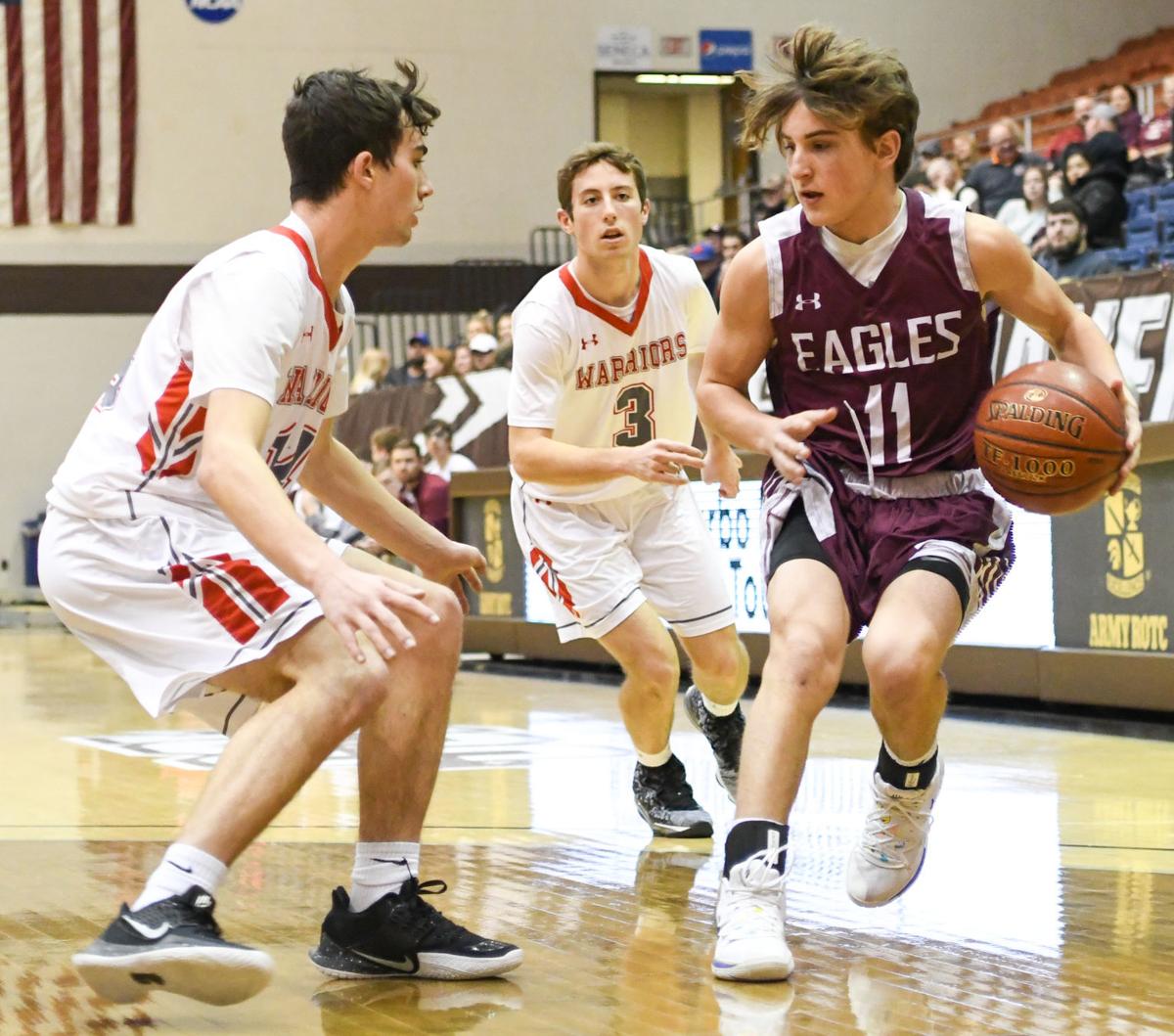 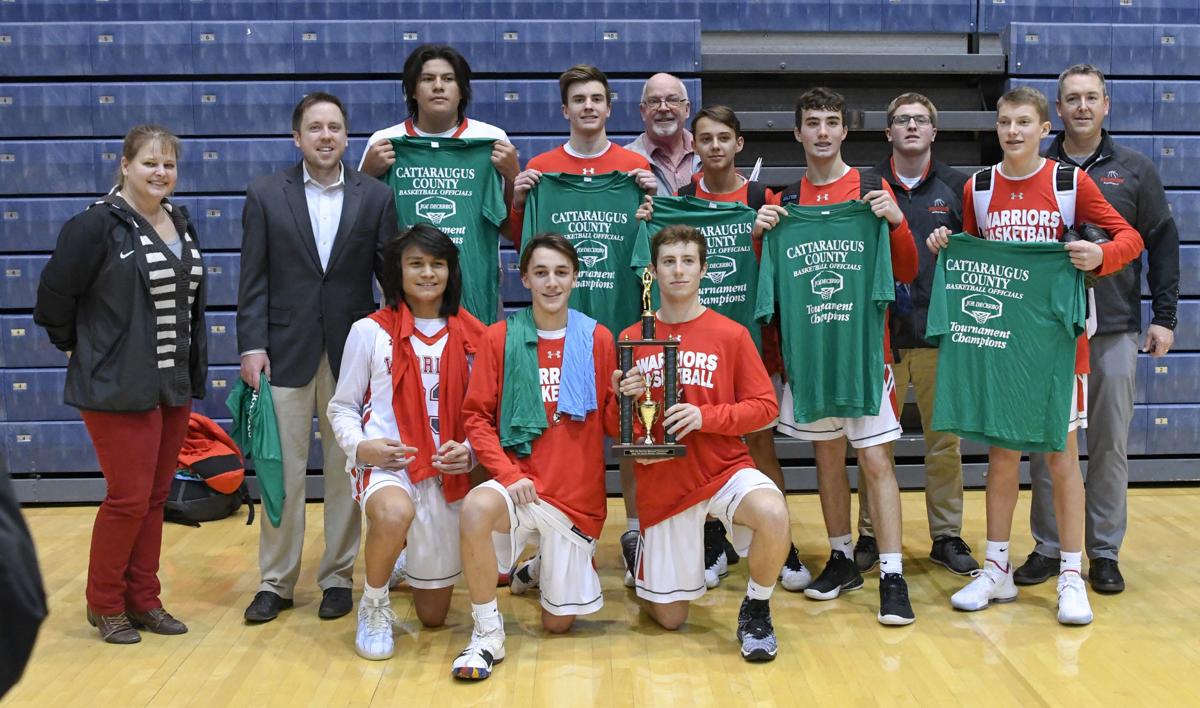 ST. BONAVENTURE — It would be hard to pen a better ending to Lucus Brown’s first start as an eighth grader on the Salamanca boys basketball team.

Brown stepped off the bench with his team shorthanded on the second day of the Joe DeCerbo Memorial Tournament and hit the biggest shot of the night to lift the Warriors over Ellicottville, 52-48, in the Pat Carroll Division championship game.

The Warriors had four players, including one starter, not dressed for the game for what coach Adam Bennett called a “team” issue. In their absence, Brown stepped in and helped seal the win.

“We hit a little bit of adversity this weekend with a few of our guys and we were down to eight tonight,” Bennett said, “and Lucus steps up as an eighth grader, the kid's a gamer. He's not scared of anything, he's a gym rat, he loves the game and he loves the big stage. For him to hit that shot, but I really thought the way he played the whole game, he attacked the basket, he played great defense for us, he was huge and the sky's the limit for him. To be doing what he's doing in eighth grade is incredible.”

Leif Jimerson led the Eagles (5-1) with 12 points. Wyatt Chudy chipped in nine points, seven assists and four steals while Clayton Rowland had eight points and seven assists for Ellicottville. The Eagles won their first round game 52-37 over Portville on Saturday.

“We started picking up some fouls on the defensive end and that kind of changed some of our rotations around,” McCann said, “and when they changed into the zone defense, I just think we stopped being aggressive and stopped kind of attacking and moving to a little bit to the basket. Those things kind of coupled on us and snowballed a little bit and let them back into the game at half.”

After scoring on the opening tipoff, Salamanca trailed or tied Ellicottville until midway through the third quarter, when the Warriors retook a 30-28 lead. The Warriors’ rally to 24-24 at halftime set up a back-and-forth second half that would not be settled until Brown’s go-ahead three-pointer.

“We just weren't playing our style of basketball,” Bennett said of the first quarter. “There's no excuses, but being down to eight, we had a lot of stuff happen. We came out and we were flat, there's no question. But this group, every time they face adversity they find a way to get through and their resiliency, I thought we played a great second quarter and the third and fourth, it was just a battle. Dave made some great adjustments against the 3-2, we were trying to change defenses and mix it up and offensively find a way to get around their length. They're a very good defensive team, so this was a big win for us, not only because of or resiliency but for our confidence too.”

Trailing 44-40 with less than five minutes to play, Salamanca allowed just four more points the rest of the game.

“We just kept stressing defense,” Bennett said. “I thought we got a lot of huge stops on defense, Jarod White did a great job on the glass in the fourth quarter, but our ability to execute off the ball defensively and then at the line, Aaron George didn't have a great shooting night by any stretch, but he hit some big shots down the stretch and then hit some big free throws as well.”

“I thought our kids played hard tonight,” McCann added of his team’s first loss. “They battled and like I just told them in the locker room, we had some opportunities, we just missed down the stretch. That's the game of basketball, sometimes those shots go in, sometimes they don't. Salamanca, credit to them, they made a big shot at the end and we missed a couple of opportunities. But moving forward, it's a game we can learn a lot from in terms of our execution down the stretch and in the long run we'll get better from it.”

The Warriors, who defeated Franklinville 64-41 on Saturday in the first round, repeated as Carroll division champions and enter a long break with a positive.

“It's huge for us,” Bennett said. “We're off until Jan. 7 when we play Randolph, so it's a great way to end the year. This is a great tournament. The officials do such a great job. There's great competition so to be able to come out tonight and win on this stage, to get our second straight IAABO championship and end the year on a good note is good for us and now we've got to get back in the gym and we'll have a couple weeks to prepare for a huge test in Randolph.”

Isaac Brown scored 18 points and Lucus Brown added 14 in a first-round victory for Salamanca on Saturday.

Ellicottville cruised to a first-round win as Leif Jimerson poured in a game-high 17 points.

Light rain...mixing with snow in the afternoon. Temps nearly steady in the mid to upper 30s. SSE winds shifting to WSW at 10 to 15 mph. Chance of precip 70%.

Variable clouds with snow showers. Low near 30F. Winds WSW at 5 to 10 mph. Chance of snow 60%. Snow accumulations less than one inch.

Variably cloudy with snow showers. Temps nearly steady in the low to mid 30s. Winds WSW at 10 to 15 mph. Chance of snow 60%. Snowfall around one inch.