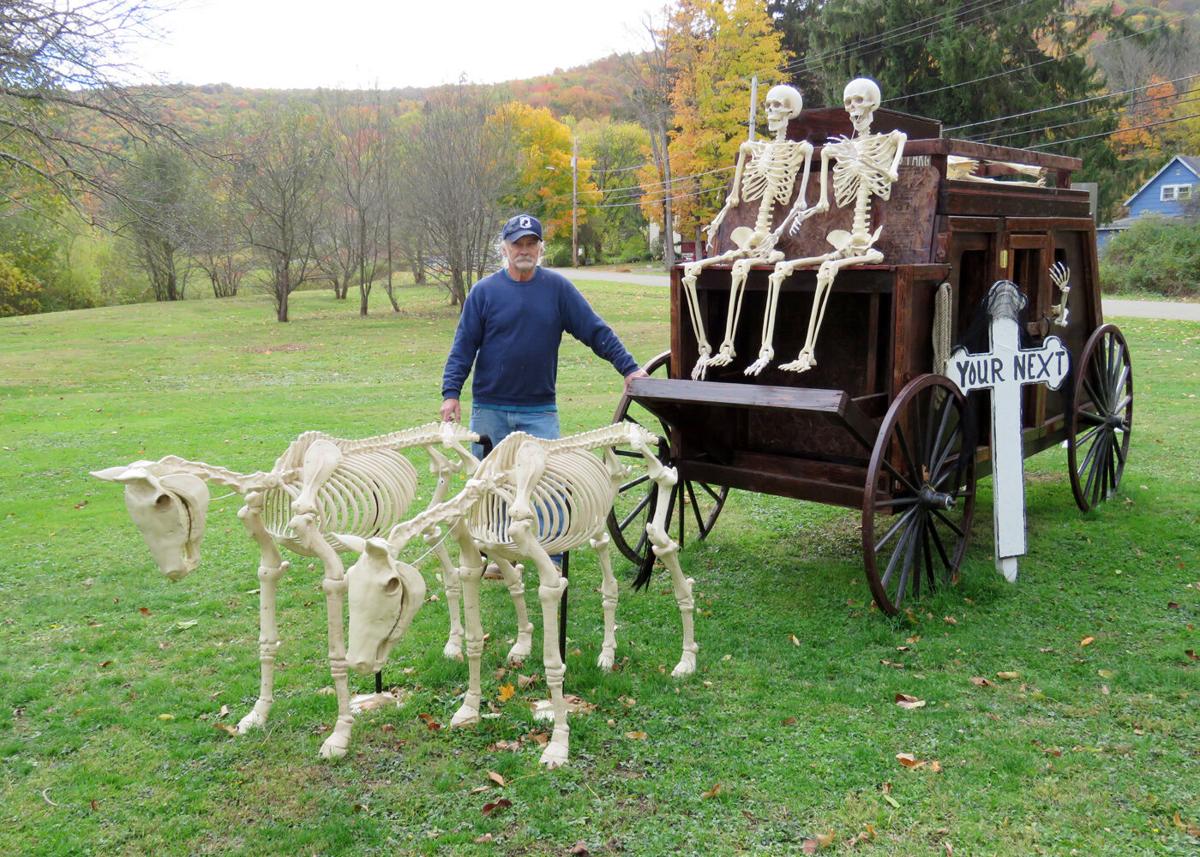 There’s a spectacular Halloween display on State Park Avenue that celebrates the upcoming spooky but fun night. Mike Madison (pictured) makes many of his Halloween features by hand including this nearly life-size wooden stagecoach he recently completed. 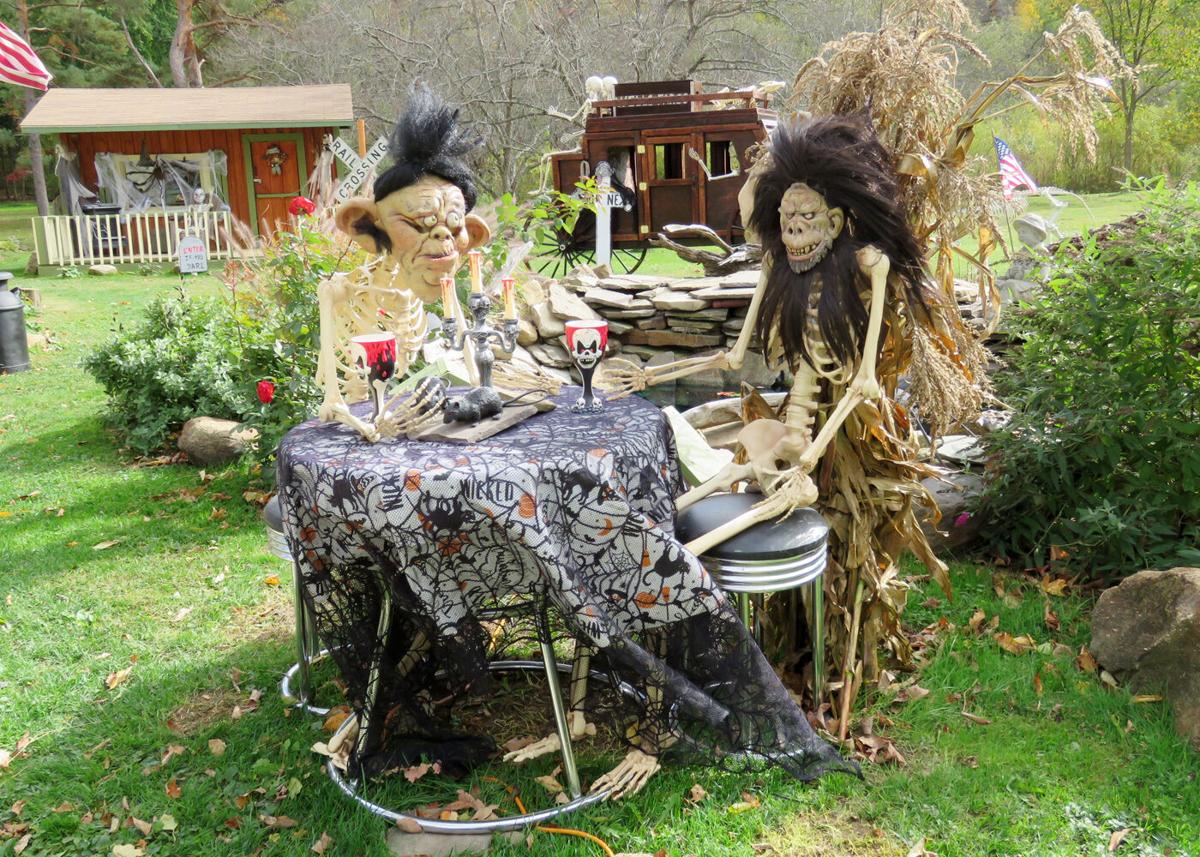 A lovely skeleton couple enjoys an appetizer of rats with their drinks. 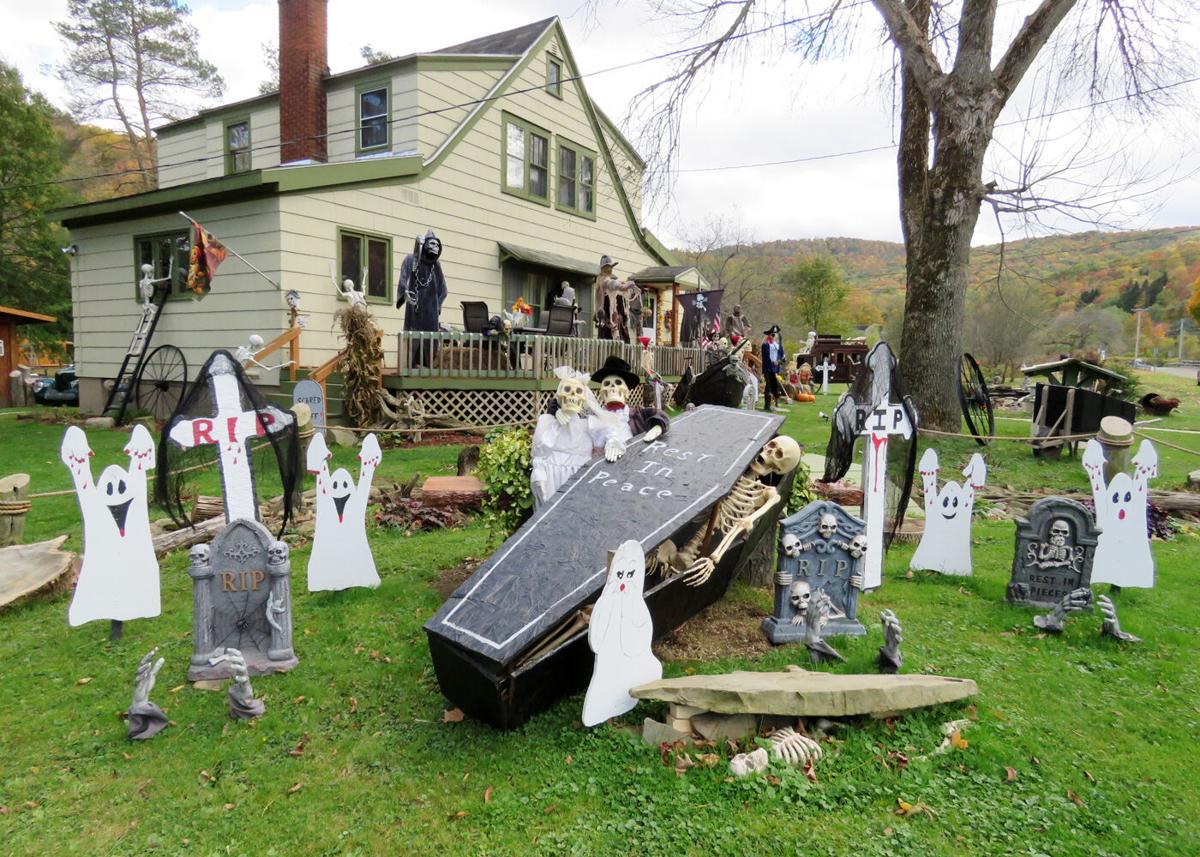 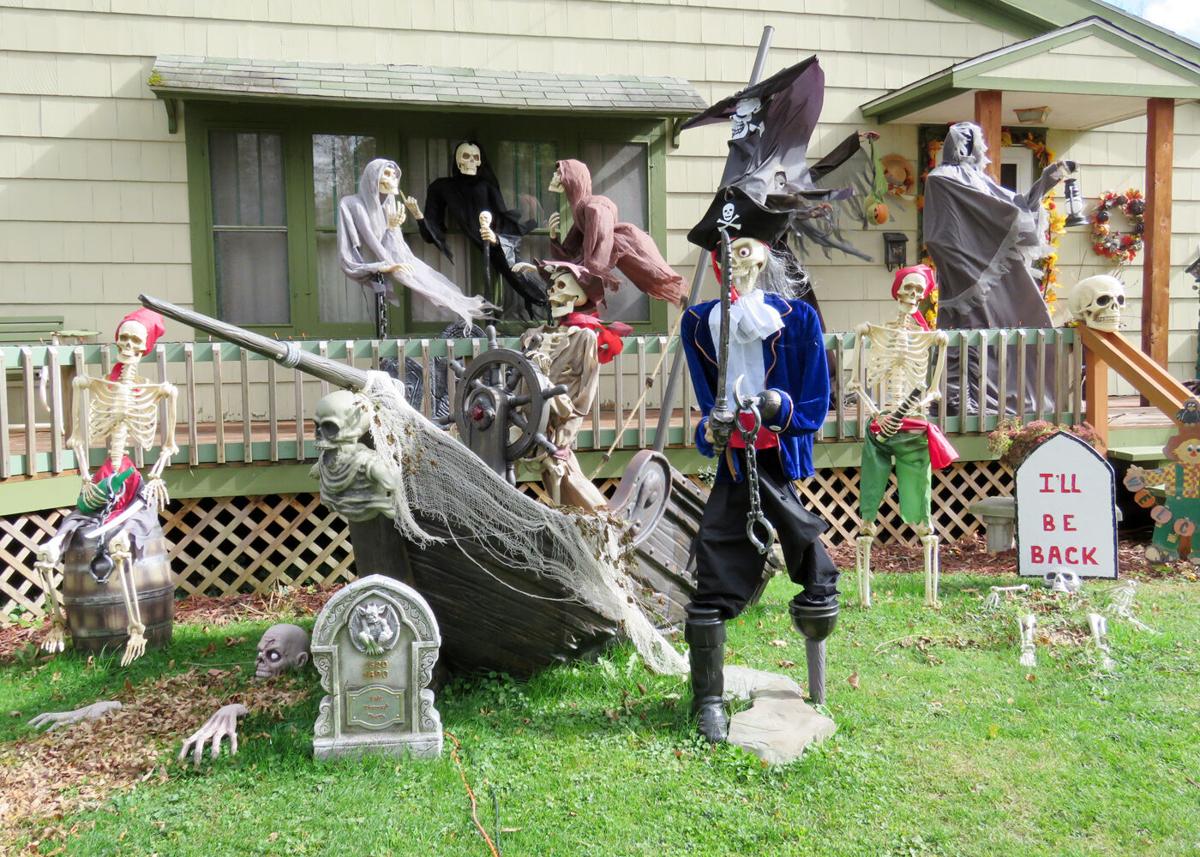 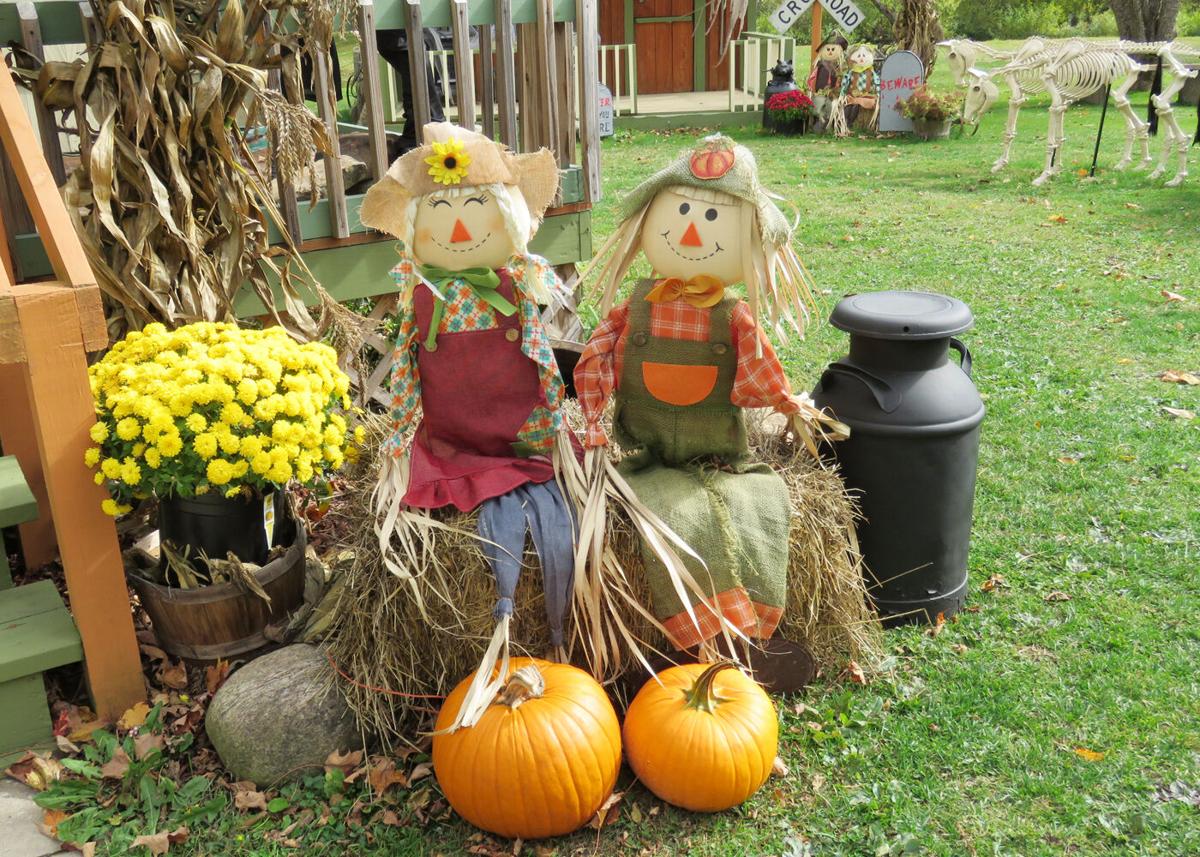 The only Halloween decoration that is not scary at all are these sweet scarecrows.

There’s a spectacular Halloween display on State Park Avenue that celebrates the upcoming spooky but fun night. Mike Madison (pictured) makes many of his Halloween features by hand including this nearly life-size wooden stagecoach he recently completed.

A lovely skeleton couple enjoys an appetizer of rats with their drinks.

The only Halloween decoration that is not scary at all are these sweet scarecrows.

SALAMANCA — Creepy, crawly and spooky is the description that will likely come to mind when people visit Mike Madison’s amazing Halloween display at 359 State Park Ave.

Ghouls, ghosts and goblins are lurking about in anticipation of Halloween night, and they are waiting to scare the “bejeebers” out of anyone who visits after dark.

The spectacular display located on Madison’s front lawn is packed full of animated and motion-activated figures looking for freaky fun when night falls. There are skeletons in interesting poses everywhere.

A humorous skeleton couple sits at a table enjoying some drinks and rats — yes, rats. There are skeletons peeping in the windows, a sinking ship with a pirate skeleton, one crawling out from under headstones and two driving a stagecoach. Madison said the scariest figure is probably the new skeleton on the deck wearing a hat.

“The animated figures are pretty neat, but you gotta’ see them at night to appreciate them,” he said. “When this guy waves his arm in the dark it’ll scare the crap out of you.”

Madison said he adds to his giant Halloween display every year to make it bigger and better. He makes the wooden signs by hand and many of the special features including a nearly life-size stagecoach that he recently completed.

“The stagecoach is new this year and my favorite,” he said. “A friend of mine, Stan Carlson, found me some pictures of stagecoaches to use as a guide. He brought his four-year-old grandson over and we put him in the stagecoach, then took pictures of him sitting inside.”

Sitting on top of the coach is a pair of skeletons driving a team of skeleton horses. A skeleton dog is along for the ride with a skeleton horse following behind. Madison is currently working on a building that will be a saloon to go with the stagecoach. He hopes it will be part of his Halloween display next year.

“I do it for the kids, but we don’t get very many up here because we are not in the residential area,” he said. “Unless somebody tells them to continue up State Park Avenue, they miss it.”

According to Madison, several people have contributed to his displays by donating or lending him holiday-themed items including local residents Carlson and Tim Jackson.

“Stan is the one who got me more into Halloween. He does a lot over on Lincoln where he lives,” he said. “Tim gets a lot of stuff donated to him. He told me he wanted to ‘Pay It Forward’ so he gave me two or three totes full of little Halloween stuff.”

Madison said his son, Aaron, helps him put up his holiday decorations that take the better part of a day to accomplish. He said anything Halloween comes right down the day after, but he leaves some of the fall items up while he’s transitioning to Christmas decorations.

“Wait until Christmas comes; this ain’t nothin’,” he said.

Madison said it’s a nice compliment to him when people stop and take pictures of his outdoor holiday displays that he’s been putting up most of his life. He said it’s especially rewarding to see the look on the kid’s faces as they ride by on the school bus.

“I enjoy doing it and it’s pretty neat to do it,” he said. “Seeing other people enjoy what I’ve created makes it worthwhile.”

Originally from Olean, Madison said he lived in Celeron for a time before moving to Salamanca. He said he used to decorate his yard in Celeron and won the majority of contests there every year.

His wife, Marcia Parker, grew up in the house on State Park Avenue that has been in her family since her grandparents had it built. In the six years they have resided there he has built a garage, a shed, a big deck on the front of the house and a pergola out in the backyard. Their spacious yard is filled with beautiful landscaping, complete with several water features built by Madison himself.

A United States Army veteran and retired auto body technician, he enjoys restoring classic and antique vehicles. He is currently working on several vintage cars and a truck.